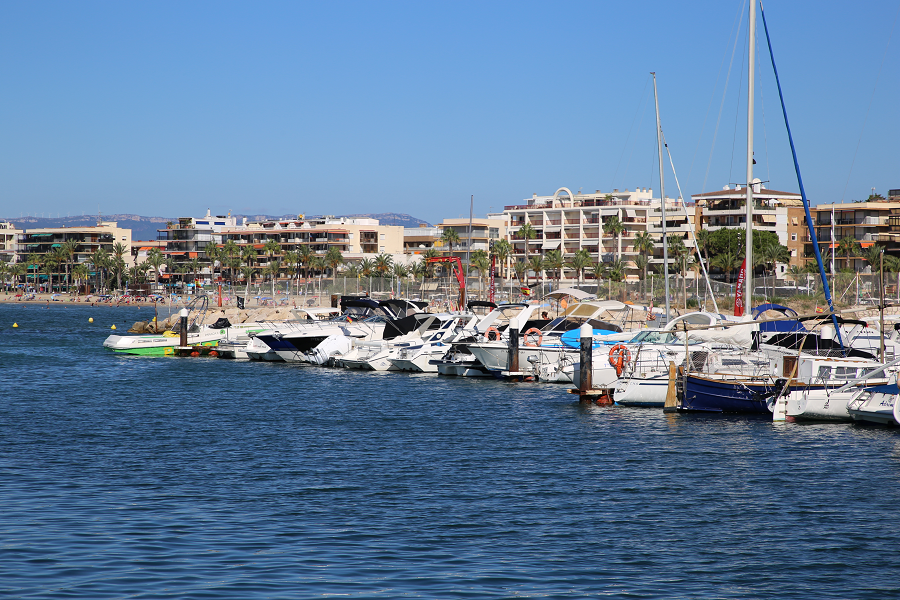 Costa Daurada is a small coastline stretch of the Tarragona province in Catalonia (Spain). Washed by the Balearic Sea, this coast is known in a tourist environment as the Costa Daurada, which means “golden coast” in Spanish. The region received such a name not without purpose, because the fine yellow sand on the resort area beaches sparkles in the sun, like gold ore.

Borders with Costa del Garraf in the north and Costa del Azahar (Valencian community) in the south. 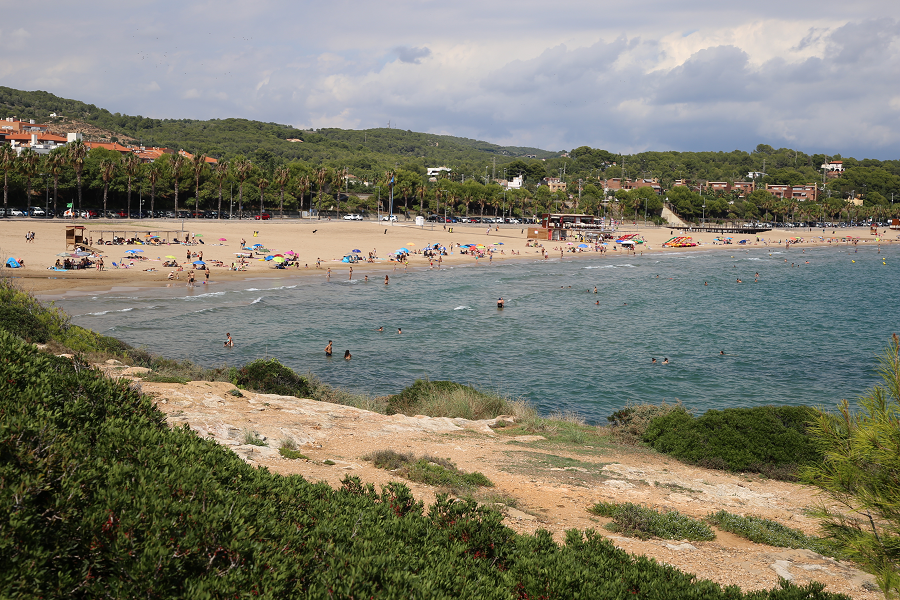 This is facilitated by the protection of the coast by low mountains from cold air masses, a favorable climate, developed infrastructure, and picturesque landscapes. Most coastal beaches have been awarded the prestigious Blue Flag Award. 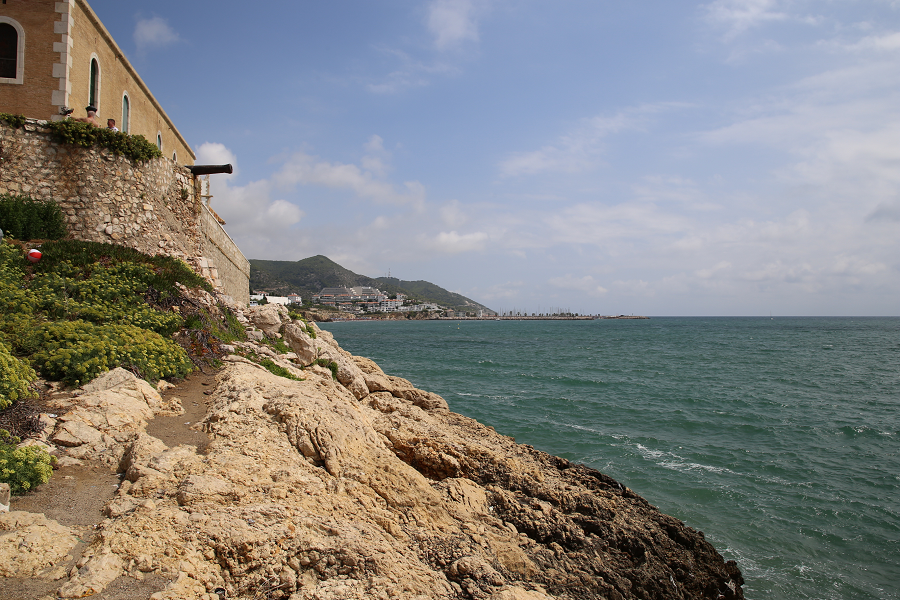 Costa Daurada on the map

The resort area has a flat topography. It is located on the east coast of Spain and stretches for 200 kilometers. The northern border of the district is the Vilanova i la Geltru ( Costa del Garraf) town, the southern is the Alcanar town (unofficially). The low Catalan mountain ranges separate the Costa Daurada from the country central part. The Ebro, the deepest river in Spain, flows into the sea via its delta at the southern borders. The Tarragona city is the Costa Daurada administrative center. It is 100 km from Barcelona. 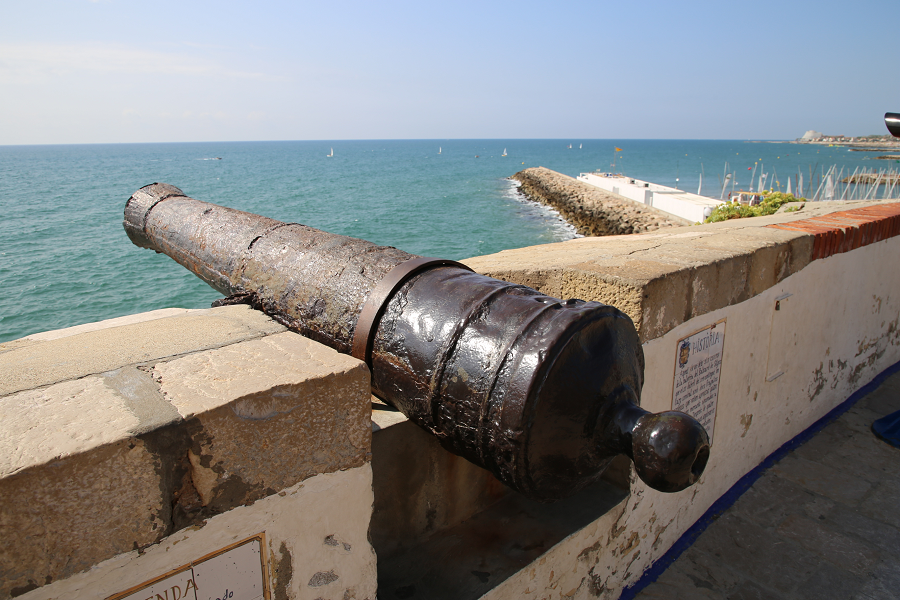 How to get to the Costa Daurada?

You need to fly to Barcelona to relax on the golden coast of Spain, El Prat de Llobregat International Airport is the closest to the Costa Daurada resorts. You can then get to the desired city by bus that runs several times a day. You can take the regional train at Barcelona-Sants station to Calafell, Torredembarra, Tarragona, Salou, and Cambrils resorts.

Another way to the Costa Daurada is to fly through Reus city airport, which is 8 km from Tarragona. You can get much faster to the right place from it. But its peculiarity is that planes come here not from all countries, but only from several European cities. There are charter flights to Reus during the summer season. Cruise ships enter the Tarragona capital. Any coastal town can be reached by taxi or a rented car from the airport in addition. 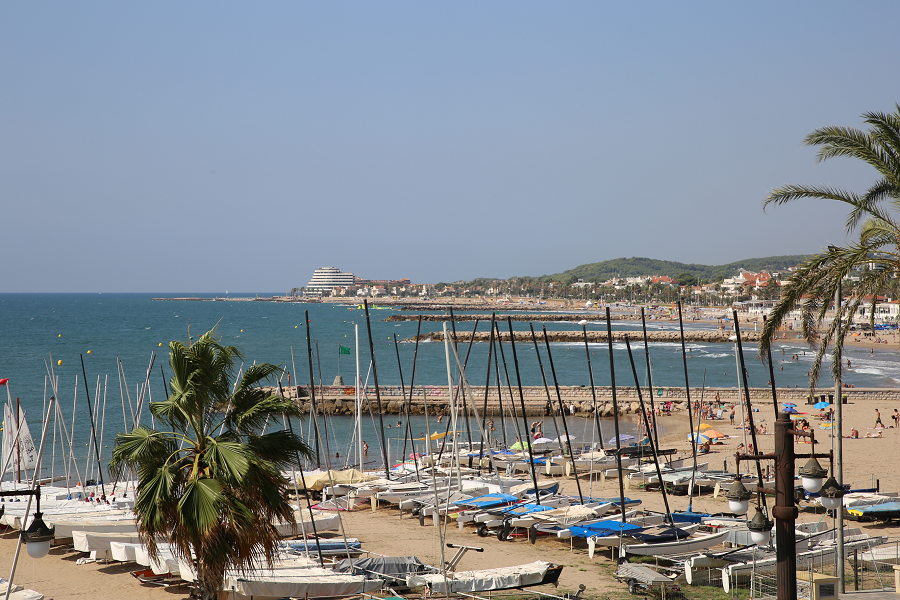 Costa Daurada has a typical Mediterranean climate. It is characterized by hot summers and mild winters. The summer season already begins in May and ends in October here. The average air temperature indicators are + 24 … 30 degrees. Water temperature is kept at + 23 … 25 degrees. 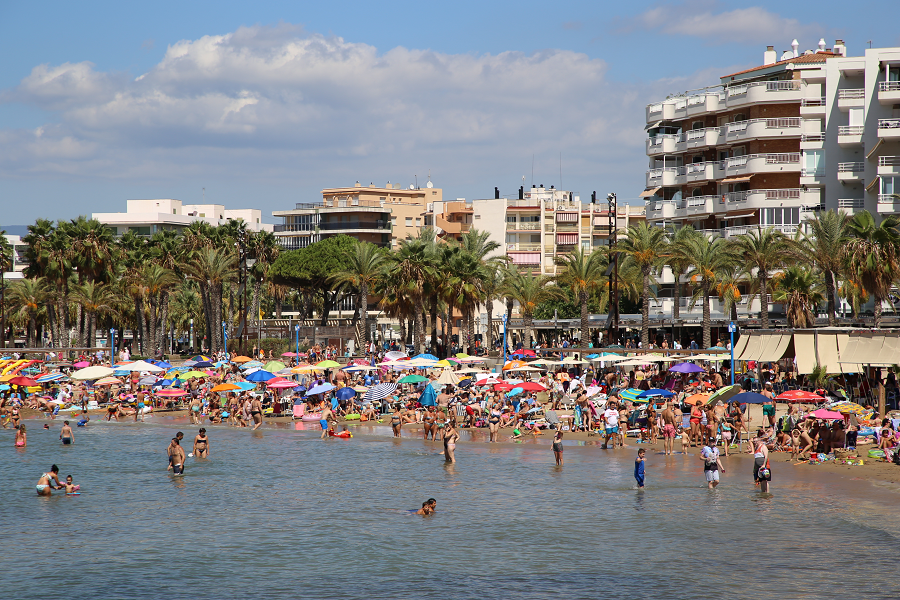 The coastal strip throughout the resort area is shallow and sloping, so the water quickly warms up. Vacationers are constantly pleased by the light sea breeze, softening the summer heat and refreshing in the evening., the Costa Daurada is cool but sunny in winter. The air heats up to +16 degrees, and the sea temperature does not exceed 10 degrees. It rains a little here. 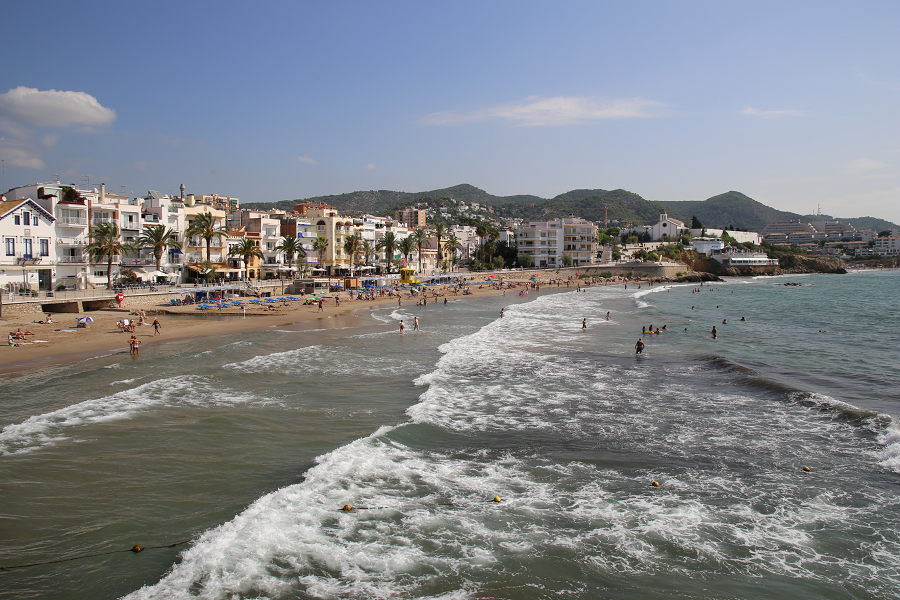 The beach area characteristic feature is its length and width. There will be enough space for everyone for both outdoor activities and relaxing pastime in the sun in any month of the high season here. All district beaches are municipal and free, sunbeds and umbrellas rental is available everywhere. 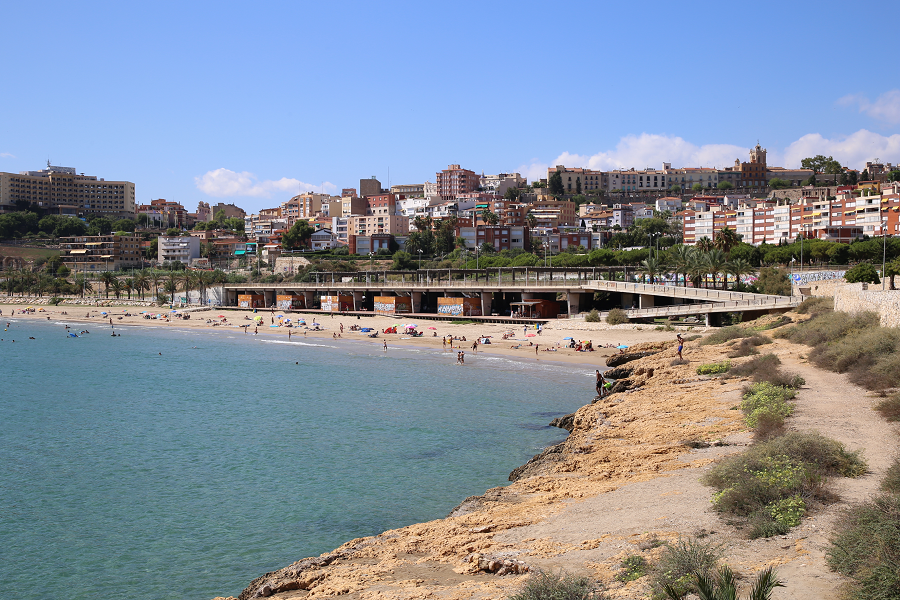 Local authorities monitor the beach places cleanliness, therefore, the order is maintained here. Many beaches have been awarded the cleanliness and quality service mark. The sandbed is shallow off the coast, the descent into the sea is convenient. there are rocky beaches in some Costa Daurada areas. 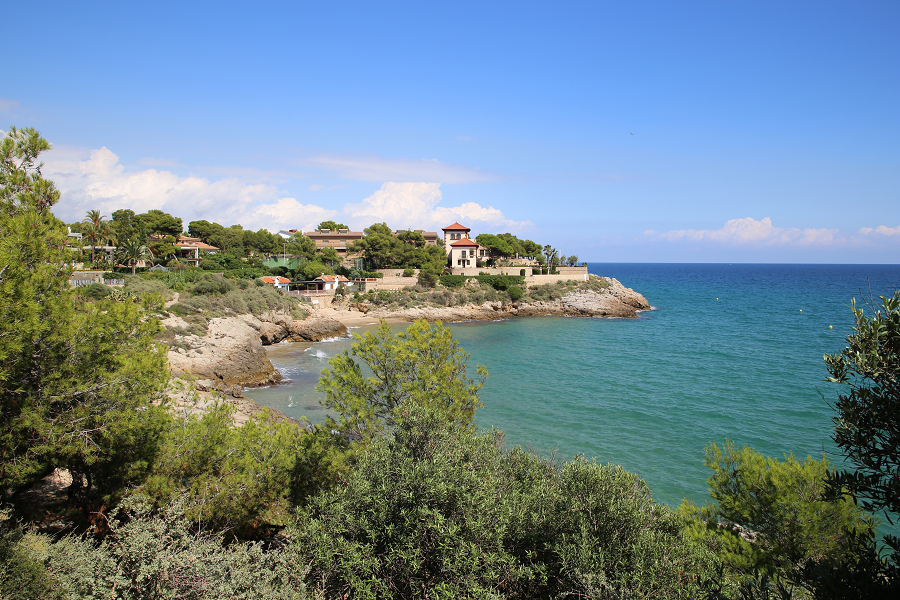 Main resorts (from north to south)

Cunit – the northernmost resort on the Costa Daurada

Calafell – the best seaside resort in Catalonia for holidays with children

El Vendrell and its graffiti

Creixell and its castle

Altafulla has been declared a cultural heritage of Catalonia since 1998

Vila-seca and its PortAventura Park

Salou – the most popular sea resort in Catalonia 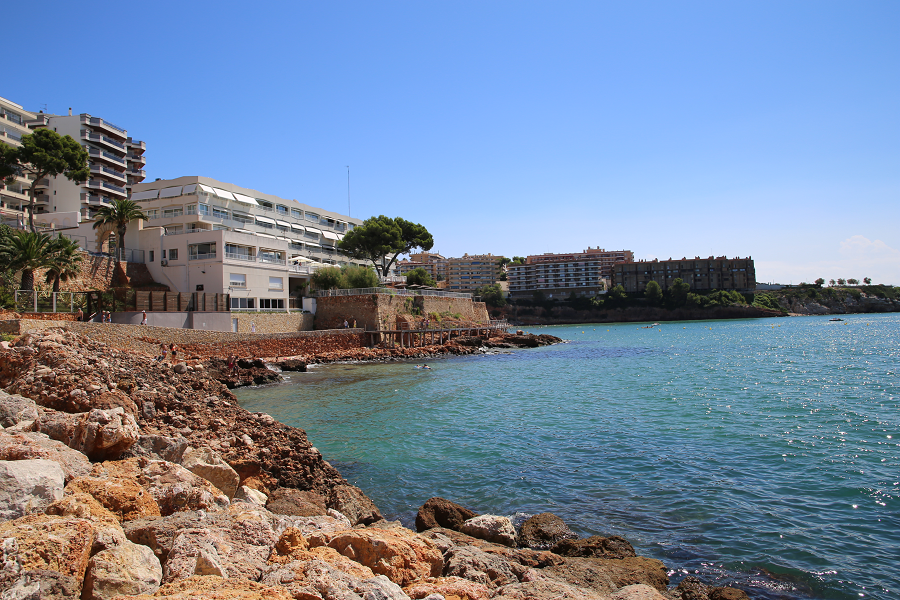 The resorts which are not officially part of the Costa Daurada

South of the Costa Daurada:

L’Ametlla de Mar and its attractions

L’Ampolla and its wild beaches

Alcanar – the southernmost resort in Catalonia