Reus attracts tourists primarily with the so-called pedestrian routes “in the Art Nouveau style”. The city has a huge number of architectural monuments of this era.

In addition, in Reus (in the homeland of the most famous Catalan architector Antoni Gaudi), you can find the iconic Gaudi museum.

The Gaudi Center in Reus (Gaudi Center Reus). Among the locals, it is known as the “Gaudi Casket”. The museum is a three-story complex. It was opened in 2007 and is dedicated to the work of Antoni Gaudi, his life and work in Reus, as well as his role in world architecture. It should be noted that in Reus itself there is not a single object of architecture by Antoni Gaudi. In the museum you can see drawings, drawings, mock-ups, details of his buildings, descriptions, templates, manuscripts and notes.

Not far from the museum is the house where Antonio Gaudi was born and raised.

The monument to General Juan Prim is in the square with the same name. General Prim, or Earl of Reus, was once one of the most influential people in Spain. In due time he even was the commander-in-chief of the Spanish army, and also held a post of the governor of Puerto Rico. 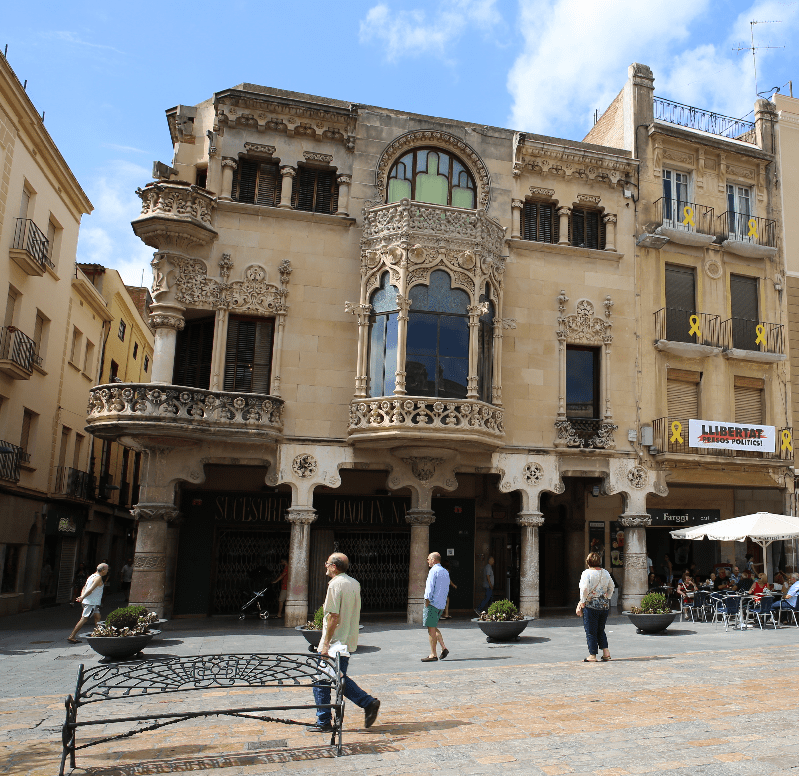 He wrote his name in the history book of Spain with his magnificent victories in wars.

As local guides tell, the monument stands with its’ back to Tarragona, and it is believed that this is a sign of revenge for this city, because Reus always competed with Tarragona for the right to be called the capital.

Prim’s Square itself is square and always full, in particular, due to the large number of street cafes and casino, which are very popular with tourists and local residents.

Church of St. Peter in Reus (Parroquia Prioral de Sant Pere Apòstol). The church bears the name of the patron of the city of Reus – St. Peter (Sant Pere). Here on June 26, 1852, the great Spanish architect Antonio Gaudi under the name Anton, Placido and Gill was baptized, as evidenced by the corresponding entry. In the same church, a year later, Anthony Gaudi received chrismation. 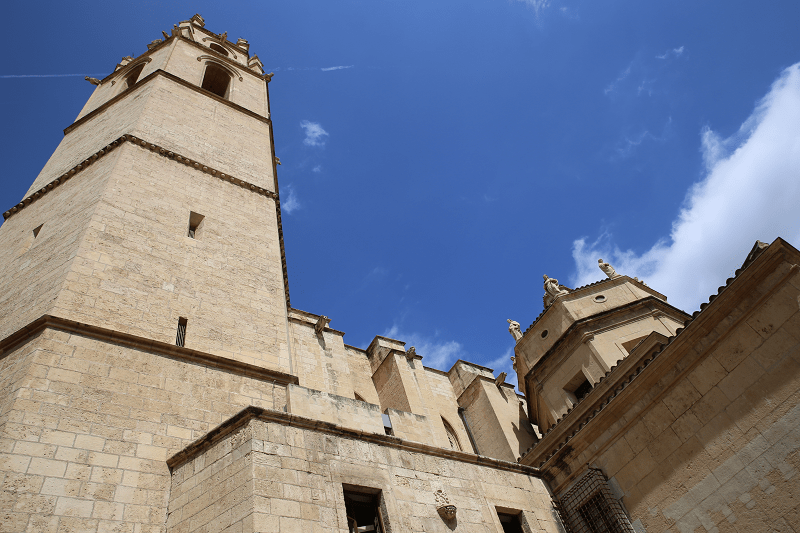 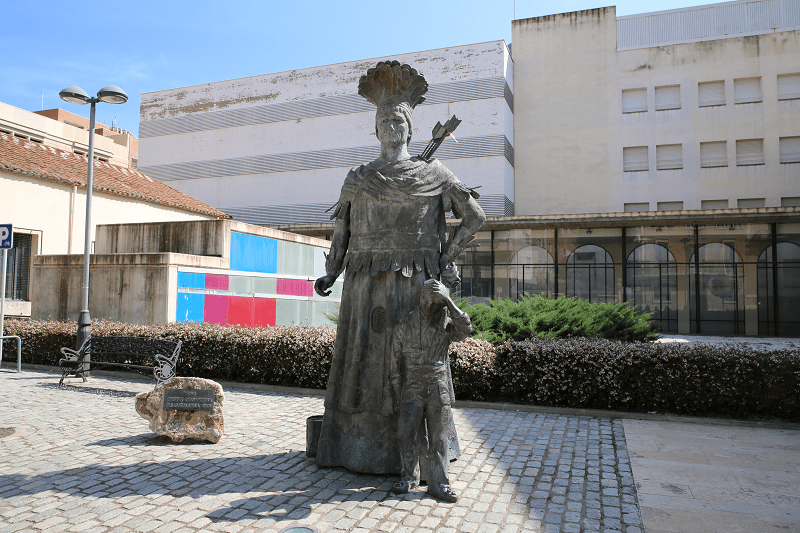 The church is open for visits.

The bell tower of the church (16th century) has a hexagonal base and a height of 60 m. The design and shape of the spiral staircase inspired Antoni Gaudi to create the grand staircase of the Sagrada Familia in Barcelona. It is open for visits. 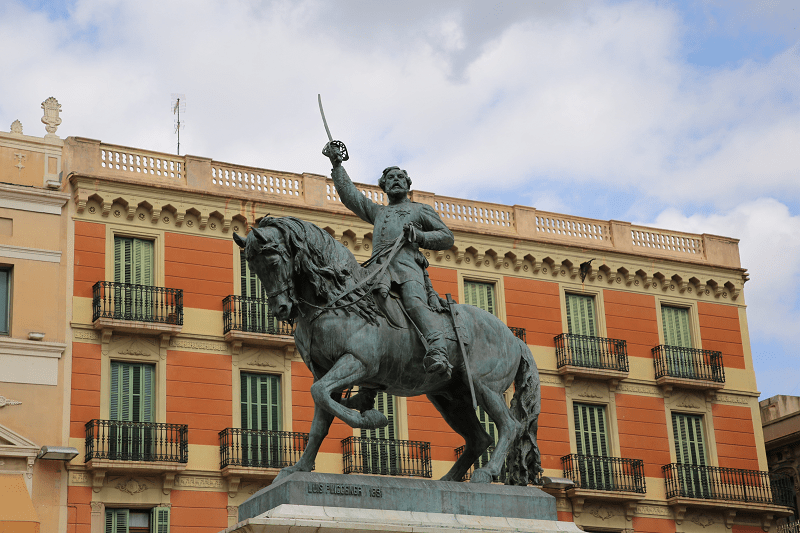 From the top of the bell tower you can see amazing 360 views of Reus. 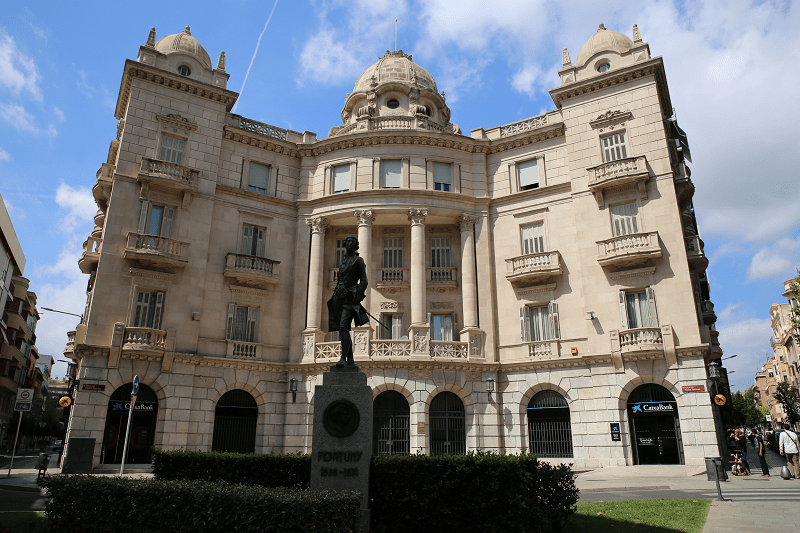 In the background of the city, the modern building of the Gaudi Museum with its black panels stands out clearly.

Theater Fortuny (Teatre Fortuny). The theater is considered the main theater of Reus. It was founded in 1882. The architect is Francesc Blanc. The theater can accommodate more than 800 persons. The theater’s interior is luxurious even in comparison with theatres found in Madrid and Barcelona. The theater is decorated with red gold-plated velvet, and the dome has an ultramarine sky color. A huge chandelier in the form of the sun hangs in the middle.

Monument to India in Reus (El monumento a la India). The monument was established in 1993, in honor of the festival of the City of Giants (Ciutat Gegantera). This holiday has been held in Catalonia since 1985, and its main characters are various huge hollow figures. 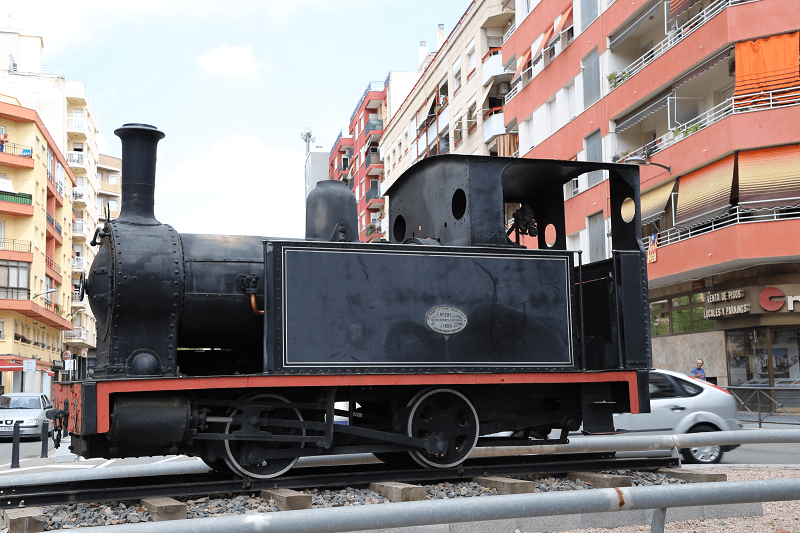 This monument, made of bronze, has a height of 3.5 meters. Nearby, a bronze figure of a man in human growth is established.

Church of San Juan Bautista. The church of San Juan Bautista was created by the modern architect Pere Caselles according to the plan of the Blessed Jocunda Bonet for the development of the parish community. The first stone of construction was laid in 1911, and in June 1932 an opening was held, at which Cardinal Vidal-i-Barraque was present. The temple, designed in the Neo-Gothic style, remained unfinished and was only later completed and restored. In addition to the main space, there is the Chapel of the Holy Gifts and Columbaria. The church is decorated with sculptural and pictorial works, as well as ceramics.

Excursion route in the style of “modernism”

The Casa Novas on the central square

The house of Fabregas (Casa Fabregas)

The house of Bartoli (Casa Bartoli) was built in 1903 for John Codina Bartoli by the architect Jose Lubietos. In the decoration of the house there are medieval elements adjacent to the modernist ones.

So, for example, heavy masonry is softened by graceful balconies.

The windows of the house are elegantly decorated with stucco molding.

On the ground floor of the house is the shop “Jofre”, which harmoniously complements the appearance of the building.

The Querol house (Casa Querol) was built in 1901 for Ferrand de Carol-i-Bopharul by the Catalan architect Pere Caselles and Tarrats.

The facade of the house, finished using various noble materials, certainly attracts attention. Decorative panels represent the coat of arms of Reus and are made in the graffito technique.

Two balconies differ from each other. Lower, on the second floor – stone, richly decorated with carved details. On the third floor – from wrought iron.

The heraldic emblem of Ferran de Carol-i-Bofarul gives a special significance to the facade of the house.

The house adjoins the slightly larger house of Tomas Jordi.

The house of Tom Jordi in Reus (Casa Tomàs Jordi). The house is five stories high, light beige, and decorated with molded floral motifs. On the lower floor there are bas-reliefs with the initials of Thomas Jordi. 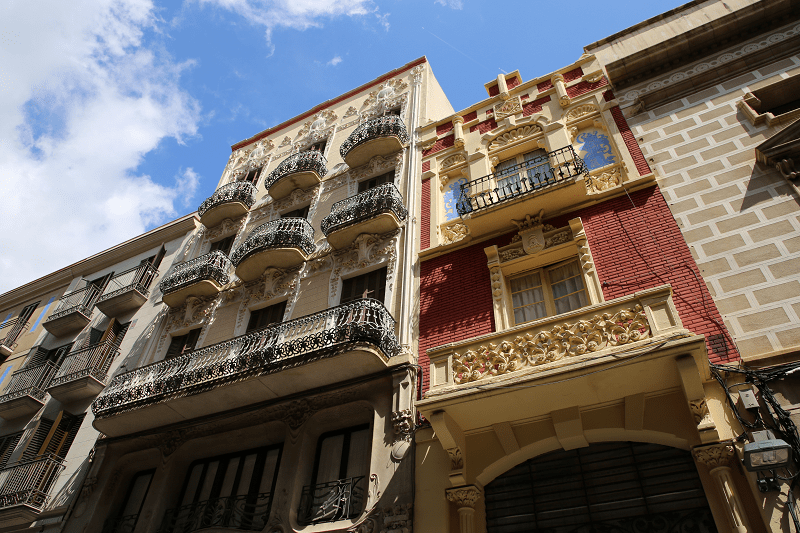 The House Gasul (Casa Gasull). The building is a mixture of styles. The project’s customer was Felix Gasull, an olive oil trader. The architect who built this house for him in 1911 is Luis Domenech i Montaner. 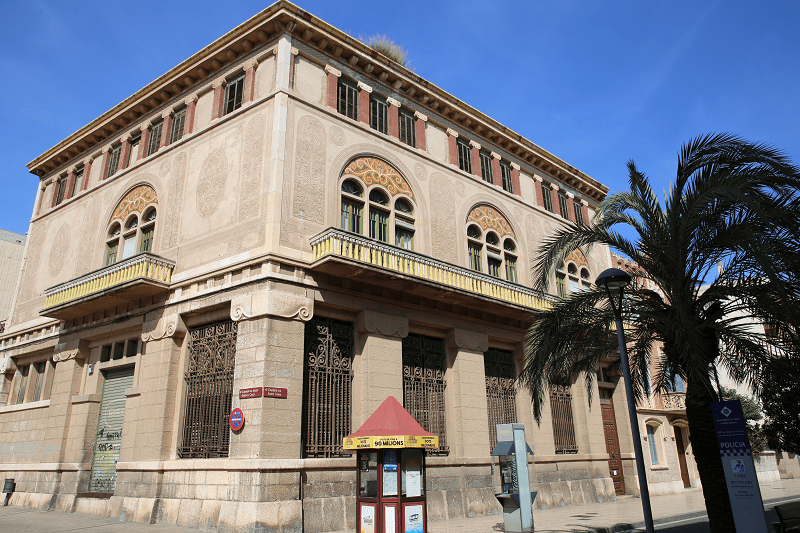 The upper floor was assigned to the living rooms, and on the ground floor there was a store and a warehouse.

In total, Reus contains 20 cultural heritage sites in the “modernism” style: to see all the sights of Reus at a rapid pace you maybe need 3-4 hours.

Although many travel companies recommend shopping in Reus, in reality there are not so many shops. Souvenirs here are really cheap compared to the more touristy Salou and Tarragona, but the choice of clothes or jewelry is minimal. In the center of Reus, next to the Mercadal area, is the largest shopping center El Pallol.

The best shopping in the nearby area is Barcelona with its huge shopping centres and the central streets.

How to get to Reus?

The international airport is in Reus (7 km from the city), to which all tourists arrive, bound for Tarragona and Salou.

The railway station is located in Plaza Joan Reboul. The main routes of the main Spanish railway company Renfe run through the city, which allows you to get from Reus to almost all cities in Spain. High-speed trains also run meaning that the travel time to Tarragona is no more than 15 minutes, to Barcelona – no more than an hour. 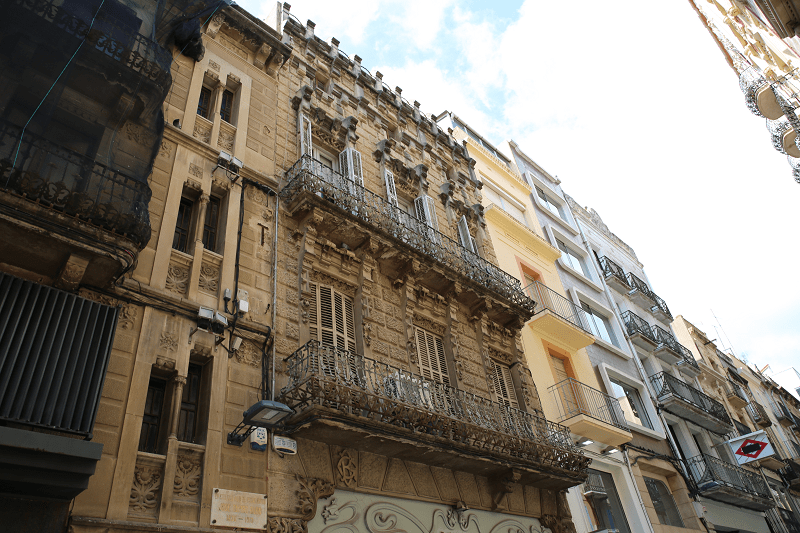 The bus station is located near Canal Square (Placa Del Canal). On a public bus it is also possible to get to almost any city in Spain. 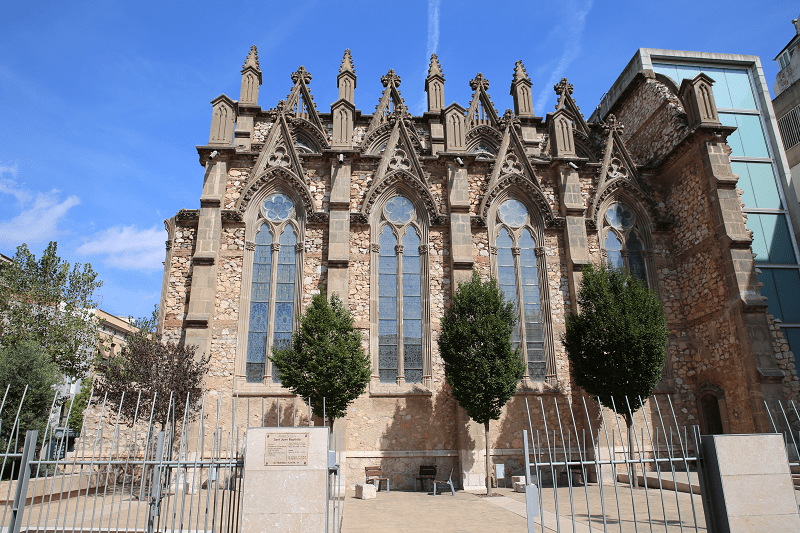 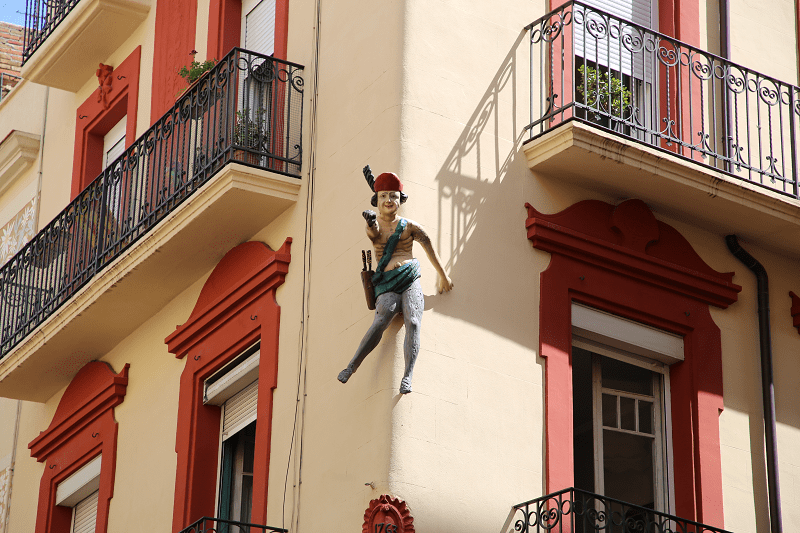 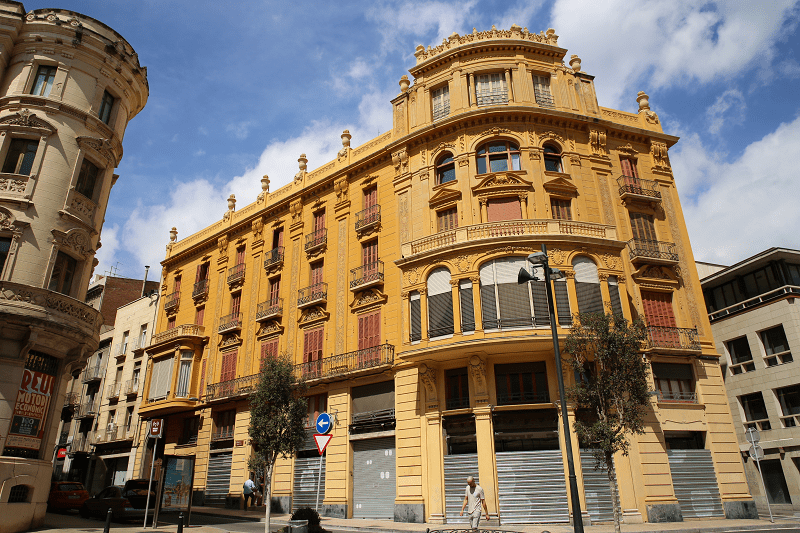