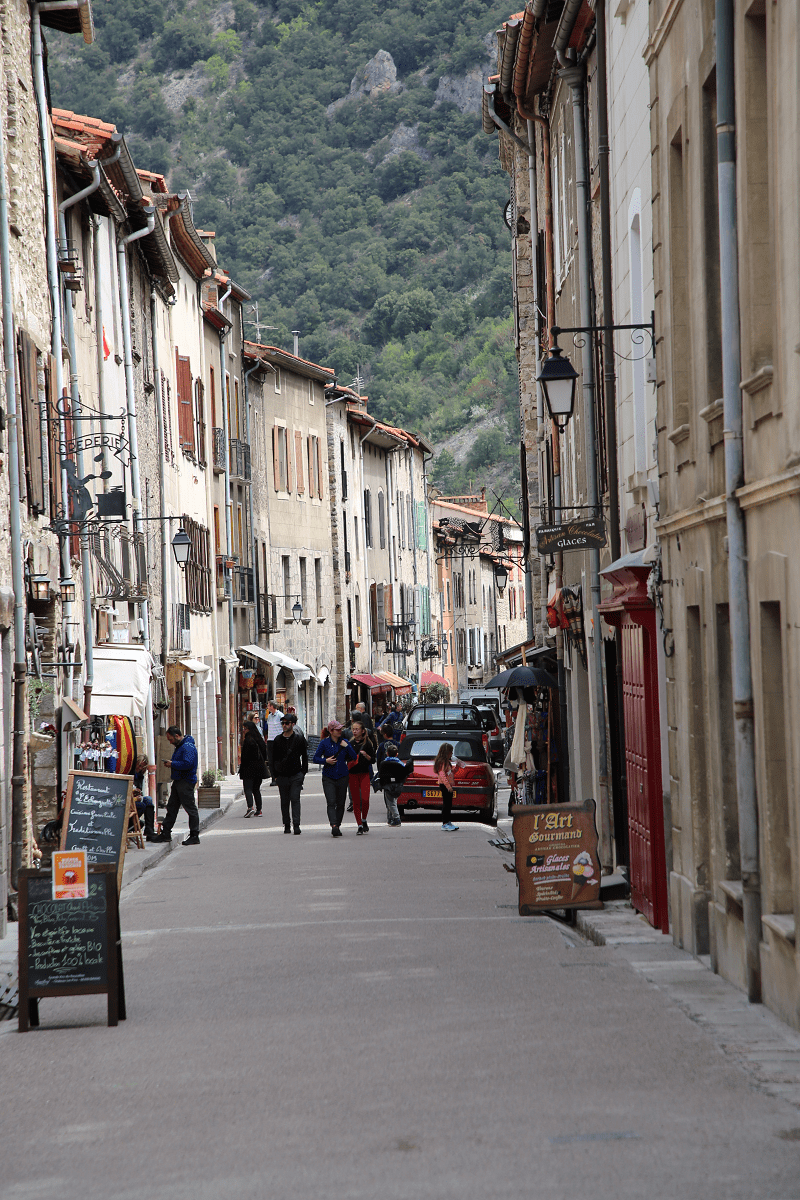 All signs at the entrance to the city and Fort Liberia are bilingual, they are in French and Catalan.

Villefranche de Conflent is in Occitanie, at the confluence of the Tet and Cadi rivers, and covers an area of 446 hectares. Guillem Ramon, Earl of Cerdagna founded the town in 1091. The earl then had a residence in Corneilla-de-Conflent but wanted to make Villefranche its new capital. The place was chosen not by chance, because being located at the bottom of the Tet (Têt) river and merging with Cadi (Cady), the town controlled the access to the Conflent mainland.

The town became the Conflent capital in the year 1126 and held this status until the 18th century.

Jacques I, the King of Aragon, ordered to construct three bridges across the Tet in 1263, which were destroyed by the terrible floods of 1421, and only the Saint Pierre Bridge (le pont Saint-Pierre) has since been restored.

Urban fortifications were constantly improved during the 13th, 14th, and 15th centuries, as discovered by documents dating from 1411.

The Local Culture and Heritage

The city is part of the network of main attractions of the French marshal Vauban and named as one of the most beautiful places in France.

It has been a UNESCO world heritage site since 2008.

Tourism, attractions, and what to see?

There is the Saint Jacques Church (Saint-Jacques) in the town. Bishop Elne (l’évêque d’Elne) gave permission for the construction of this church after the founding of the town. The oldest part of the building dates back to the beginning of the 12th century. A large part of the church was redone in the 13th century. The Church was reconstructed again at the end of the 17th century during the reconstruction of the city fortifications.

Stone walls surround the town. They are fully preserved from the times of the Middle Ages but were partially reconstructed and complemented in the 17th and 18th centuries.

The Devil Tower (la tour du Diable), adjacent to the church from the south-east is preserved from the middle ages. Part of the south curtain wall is surrounded by 2 semicircular towers (14th century), which were strengthened in the 17th century by installing 3 bastions. The first tower is considered to be part of the Corneilla Bastion, in the southeast, the second is located between the Devil Tower and the Queen bastion (le bastion de la Reine), in the southwest. The third tower rises in the northwest and is part of the King Bastion (le bastion du Roi).

The Gates of France and Gate of Spain were rebuilt at the end of the 18th century.

The Royal Bastion Tower was turned into the powder factory.

The town has several notable buildings, including the wonderful samples of medieval civil architecture in addition to Saint Jacques Church and the fortifications.

The urban space inside the walls is organized around two parallel streets: Saint Jacques in the south and Saint Jean Street in the north.

The local town hall building is located on Saint Jean Street, next to the church. Here you can see the bell tower.

The Villefranche hospital (Saint Jean Street), founded by Pons de Sarabeu in 1225, has been fully reconstructed. The building has a high rectangular tower.

Almost all the houses belong to the era of the Middle Ages. Most of them have been refurbished; therefore, they have traces of architecture from different eras. On the first floor of almost all the buildings, there are decorations of one or more round arches.

There are a great number of small souvenir shops in the town as well as small shops selling fresh pastries, delicacies and wines.

Among the recommended restaurants is Le Patio restaurant, serving Catalan and international cuisine (the chef is Johanna Carrieres). The town has several cafes.

In addition to the railway, the N116 national road leads to the town. It connects Villefranche de Conflent with Prades and Perpignan in the east and Andorra in the west.