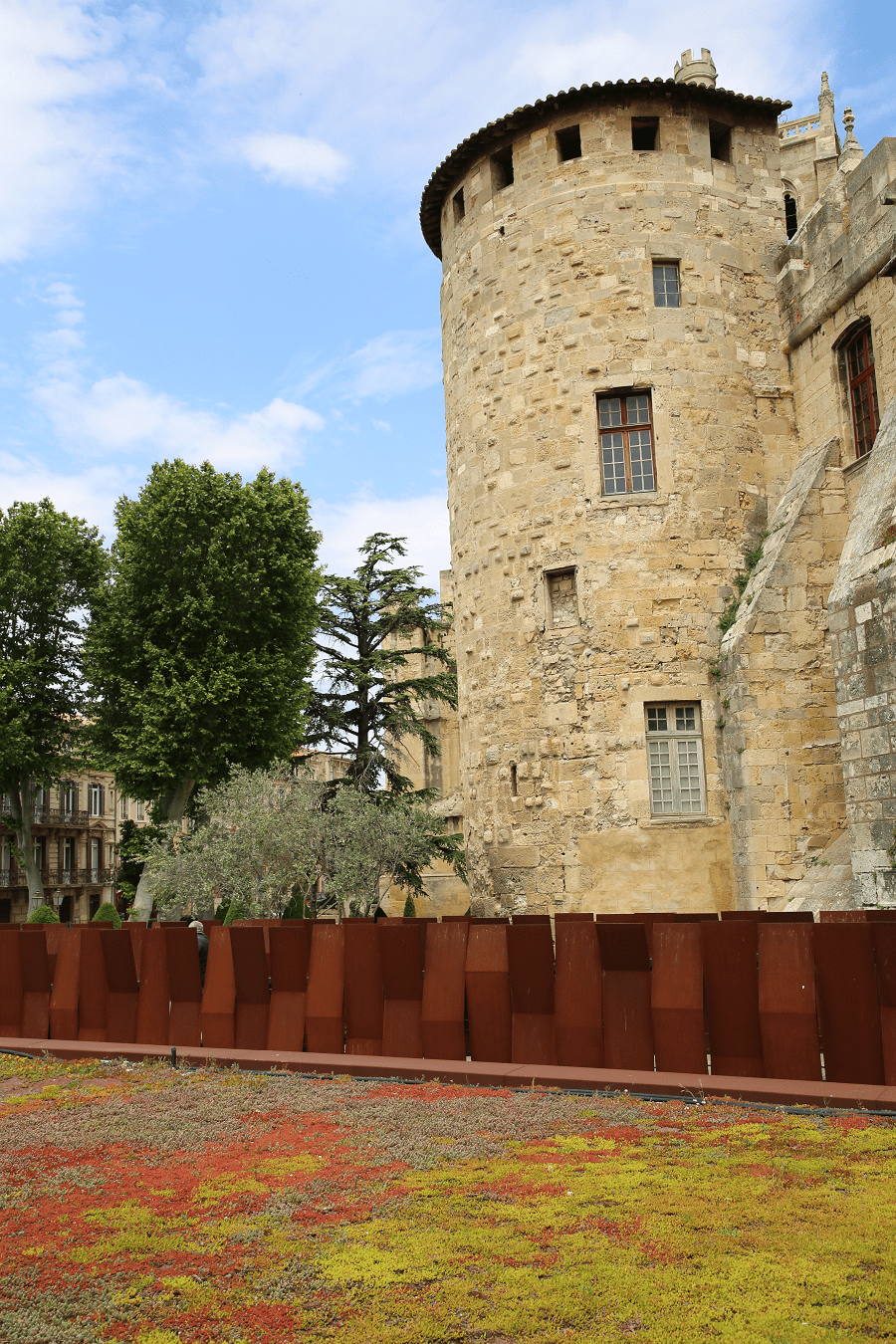 Narbonne (in Occitan, Narbona pronounced [naɾˈbunɔ]) is a city in Languedoc. Administratively, it is a French commune of the region of Occitania, in the department of Aude. With 50,000 inhabitants, called narbonesos, it is the main town of the department of Aude and capital of a district and a canton (territorial subdivision). 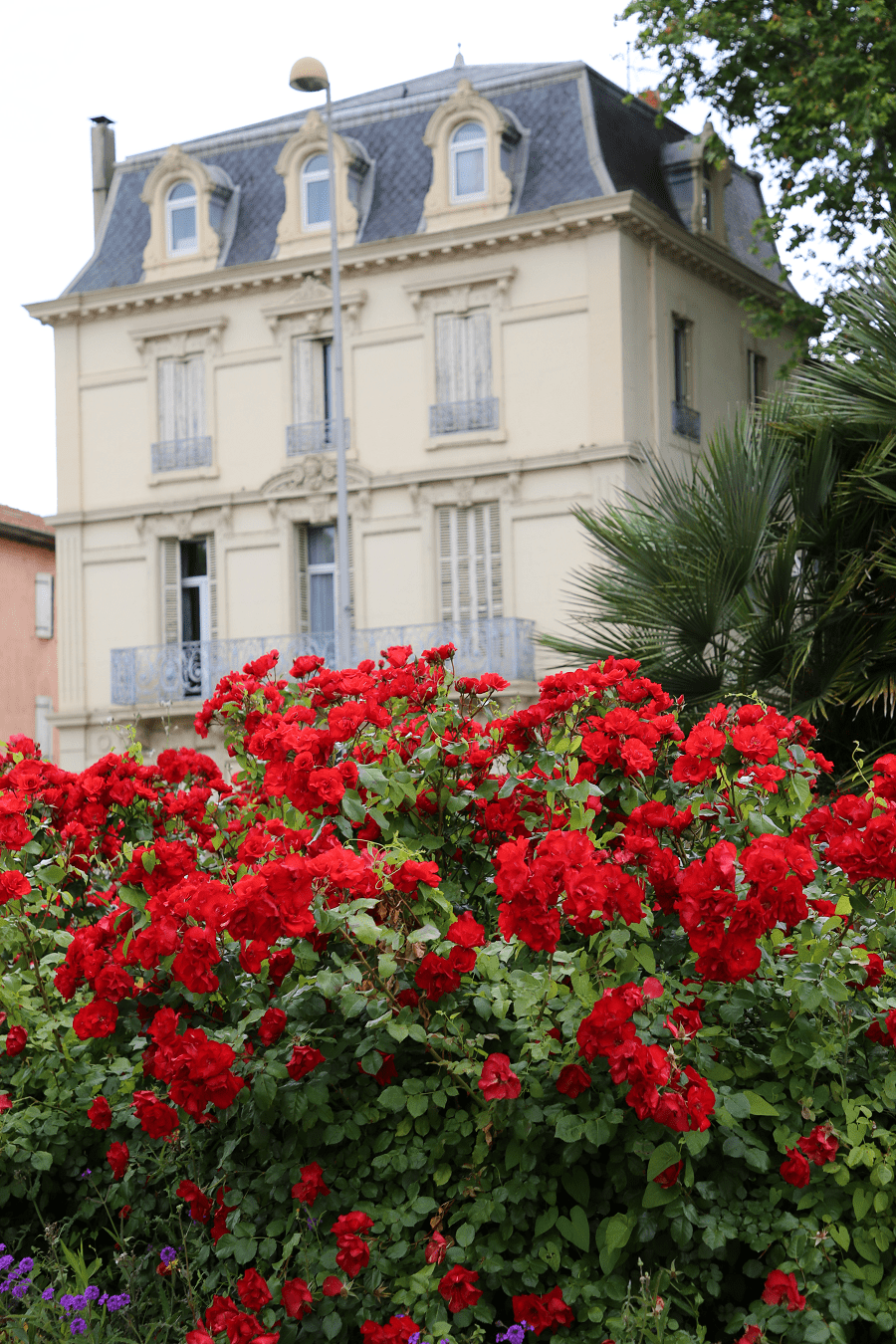 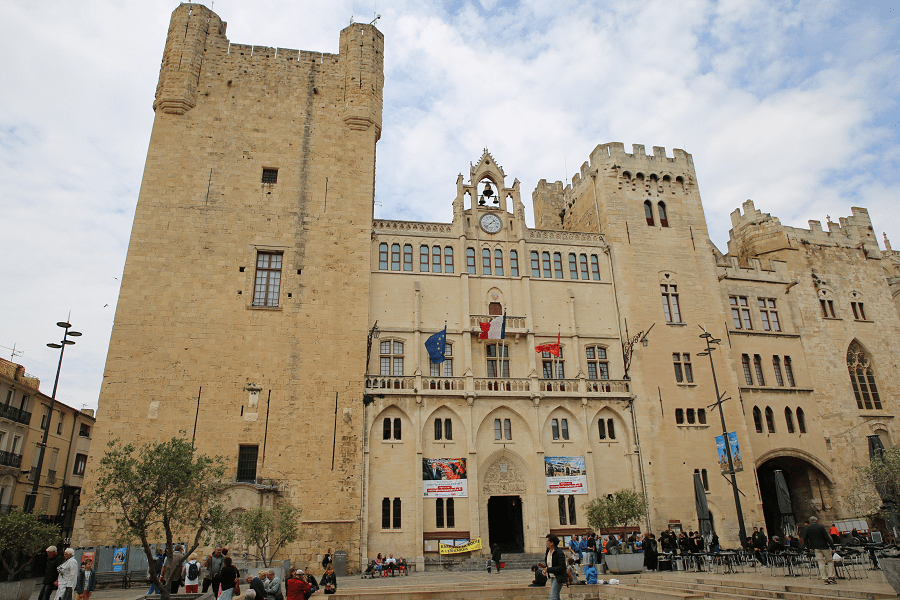 The first urban settlement dates from the 6th century BC and took advantage of its good position at the crossroads of the path that followed the coast (the future Via Domicia) and the route to the Atlantic, used in the 3rd and 2nd centuries BC to trade with the British Isles. More history see here 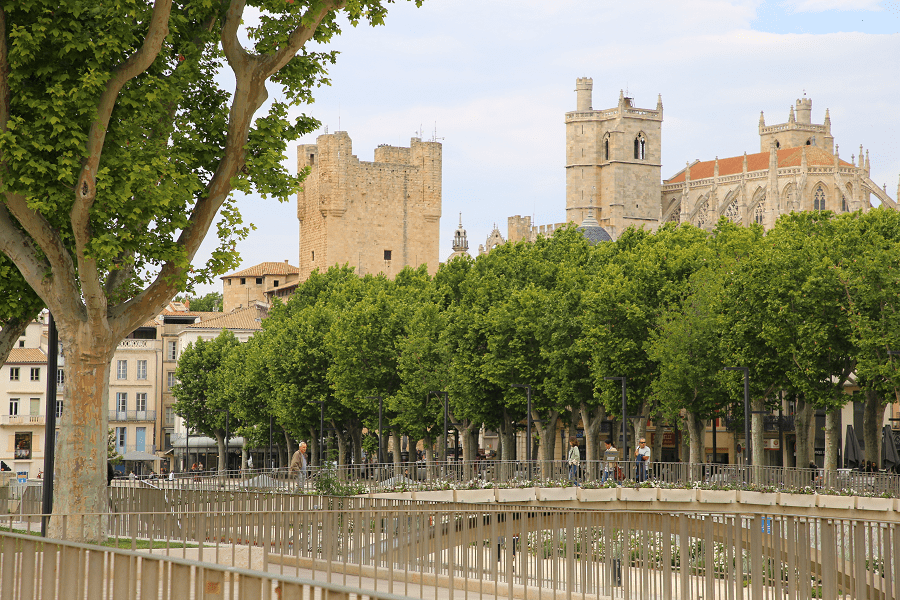 Famous people of Narbonne: Viscountess Ermengarda of Narbonne. Famous people born in Narbonne include: Charles Trenet (1913-2001), a mythical figure of the French music hall (whose house can be visited), the politician Leon Blum, and Saint Sebastian. There is a community of Catalan language in Narbonne, in the market district, towards the old church of La Morguié, and in the station district on the Avenue de Jean de Lattre de Tassigny. 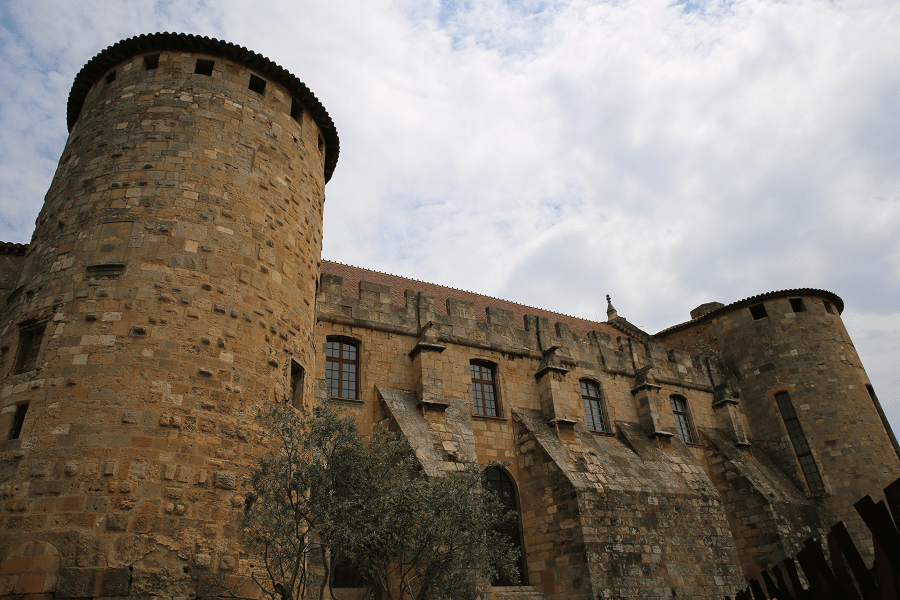 The Roman Horreum, which gained a museum status in 1975 after its opening to the public, is the only metropolitan example of gallo roman underground warehouses, which is conserved almost in its entirety. These galleries lead to small cells where goods were stored. Several lifts connected the warehouse to the forum market.

They are underground galleries, five meters below ground, built at the end of the 1st century BC, and correspond to a time when Narbonne was considered “an observatory and rampart of the Romans” (Cicero). It served as a warehouse for grain, wine and oil, and also to keep weapons, given the military importance of the city at that time.

During the development of the museum in 1975, part of the underground galleries was still used as a wine cellar. This place has remarkable humidity qualities and a good temperature for the conservation of wine, between 12 and 14 degrees.

Vestiges of Via Domitia. In 1997, during the connection work for water drainage, in front of the town hall and two meters below the current level of the square, a part of the Via Domitia was discovered. Through a coin found under a stone slab, this part is dated to the year 10 BC, hence it is a renovated part of the road, as it was originally built by the consul Domituis Ahenobarbo in 121 BC. 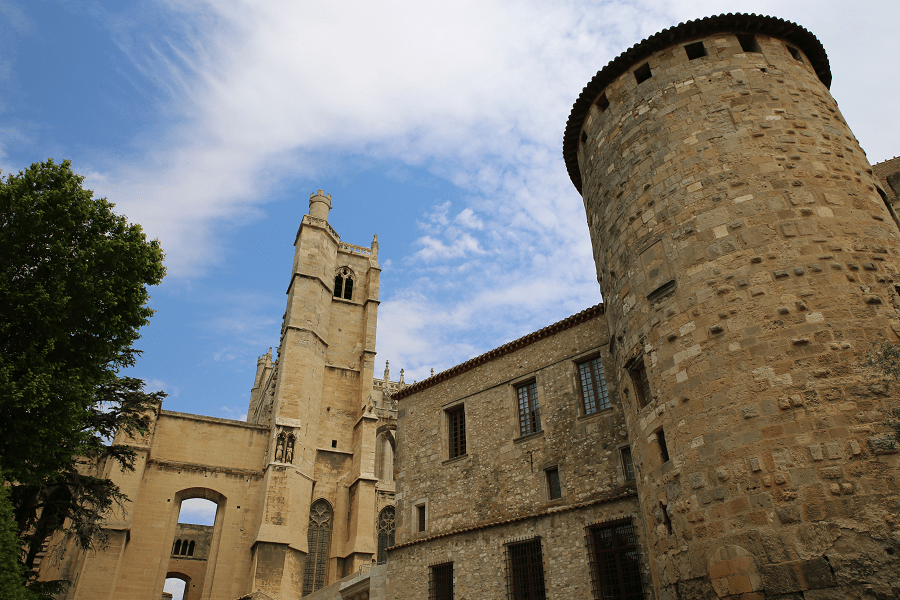 The powder house. It is from the 17th century, built in a place where there was an old warehouse and it is the only monument that refers to the military architecture in Narbonne. After its acquisition by the city and its rehabilitation, the old powder house became a temporary exhibition hall.

The palace of the Archbishops of Narbonne was at its origins a modest ecclesiastical residence, and only later it became the second archbishop’s seat, after the popes palace of Avignon. It is formed by the old palace of Romanesque origin, and the new one, of Gothic origin, linked by the passage of Ancora. Its facade has three square towers dating from the 13th and 14th centuries: the Madelein, the oldest, the tower of Saint Marcial, and the tower of Gilles-Aycelin. The central part of the facade was restored by Viollet-le-Duc. From 19th century it housed the city council of Narbonne, the museum of art and history and the archaeological museum. 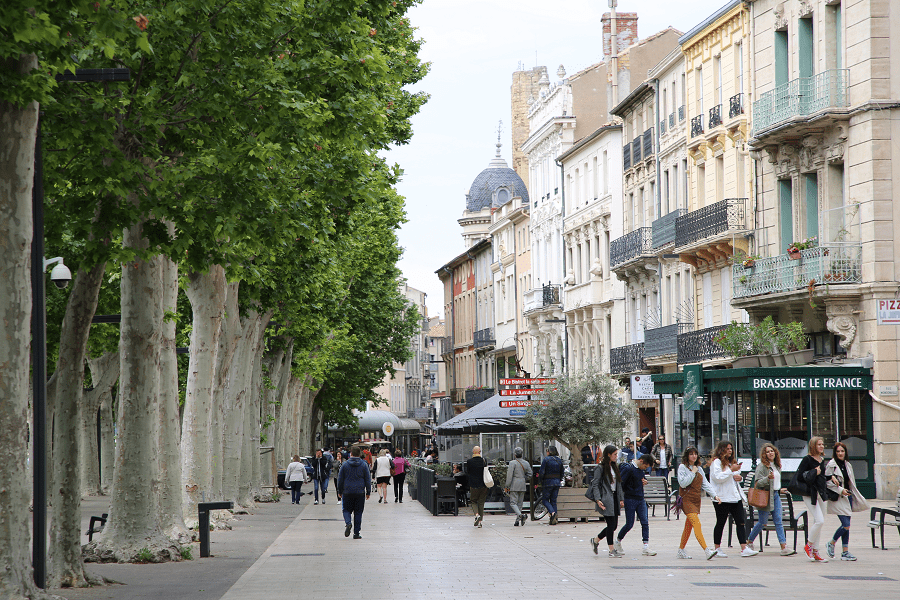 Inside the new palace (current town hall), we can highlight a vaulted room called the Treasure room. The Consols room, which is characterized by a series of pillars that support the upper floor and the remains of the first wall built during the Late Roman Empire, to defend itself against Barbarian invasions. Through a staircase dating from 1628, you can access the first floor, where you will find the Hall of the Synod. The height of this room has been reduced by half to allow the creation of an additional floor. On the walls you can see four 17th-century Aubusson tapestries on the subject of Saint Esther. 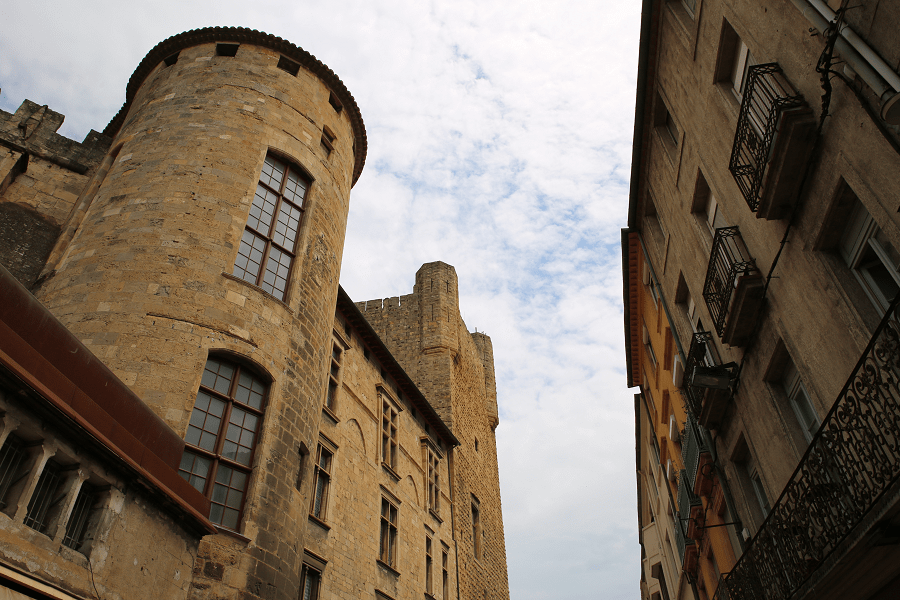 Gilles-Aycelin Tower. Archbishop Gilles Aycelin (1250-1318), former canon of Narbonne, fortified his palace with this tower built on a corner between 1290 and 1311, on the remains of a Gallo-Roman wall that before defended the city. Through this he affirmed the episcopal power in front of the viscounts who were installed on the other side of the square. It is a square tower with 4 levels finished with an upper terrace with three octagonal gables. Its height is 41 meters and remains intact since its construction. It offers a view of the city, the coast, the Corbières, and the Pyrenees. 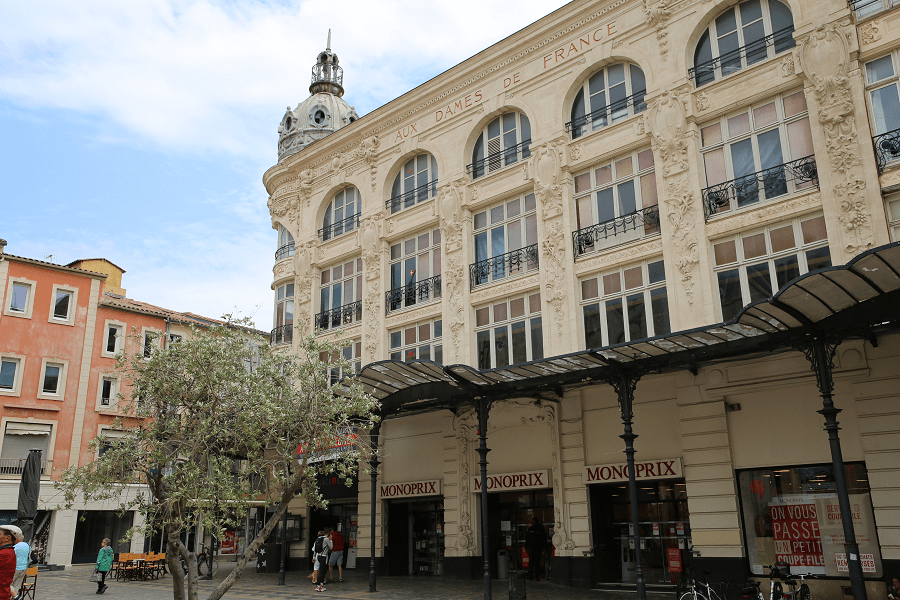 Anchor Passage. In French Passage de l’Ancre is a fortified alley that separates the Old palace of Romanesque origin, from the Nou Palace of Gothic origin. The entrance is through the Town Hall Square, between the tower of San Marcial and that of Magdalena, and leads to the cloister and the cathedral.

The name Anchor Passage is due to the anchor suspended on one of the arches of the alley. This anchor symbolized the archbishop’s rights over fishing.

A tithing was paid to the archbishop, such as the entrance fee to the port and for the fishing made. The anchor was hung in front of the Madeleine courtyard and it was lowered when the tithing was delivered. The anchor is the symbol of the rights that the archbishops of Narbonne had over the port. 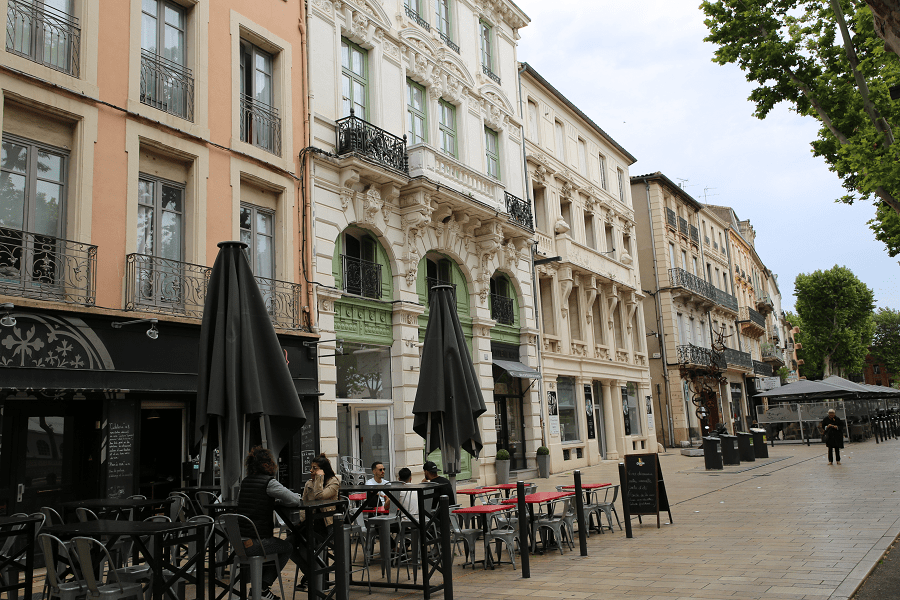 The eastern arch of the alley belonged to an old chapel of the 9th century, which formed the base of the Carolingian bell tower. At the end of the passage, the fortified western arch separates the two parts of the building; A gallery located above allows communication between the two palaces. 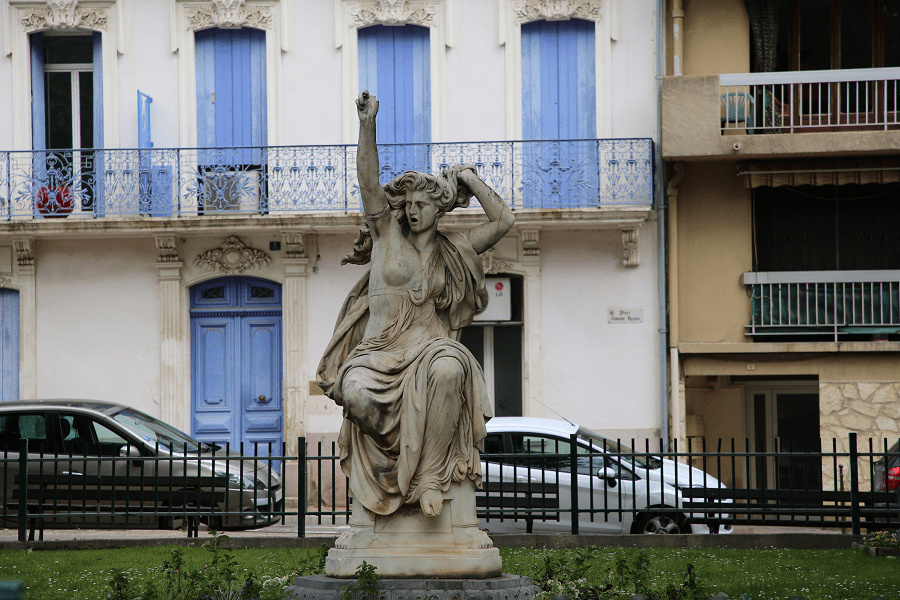 Behind this second arc, there are some steps that lead to the cloister, and from there to the cathedral.

Canal de la Robine. Originally, the Aude river had two branches, one of which used the track of the current Robine channel. The river that formerly crossed Narbone has changed its track sideways as a result of repeated floods, especially the one of 1320. Its old track has been reused by the Robine channel, connected via the Jonction channel to the Canal du Midi, at the end of the 18th century. This channel is classified as a World Heritage Site by UNESCO. 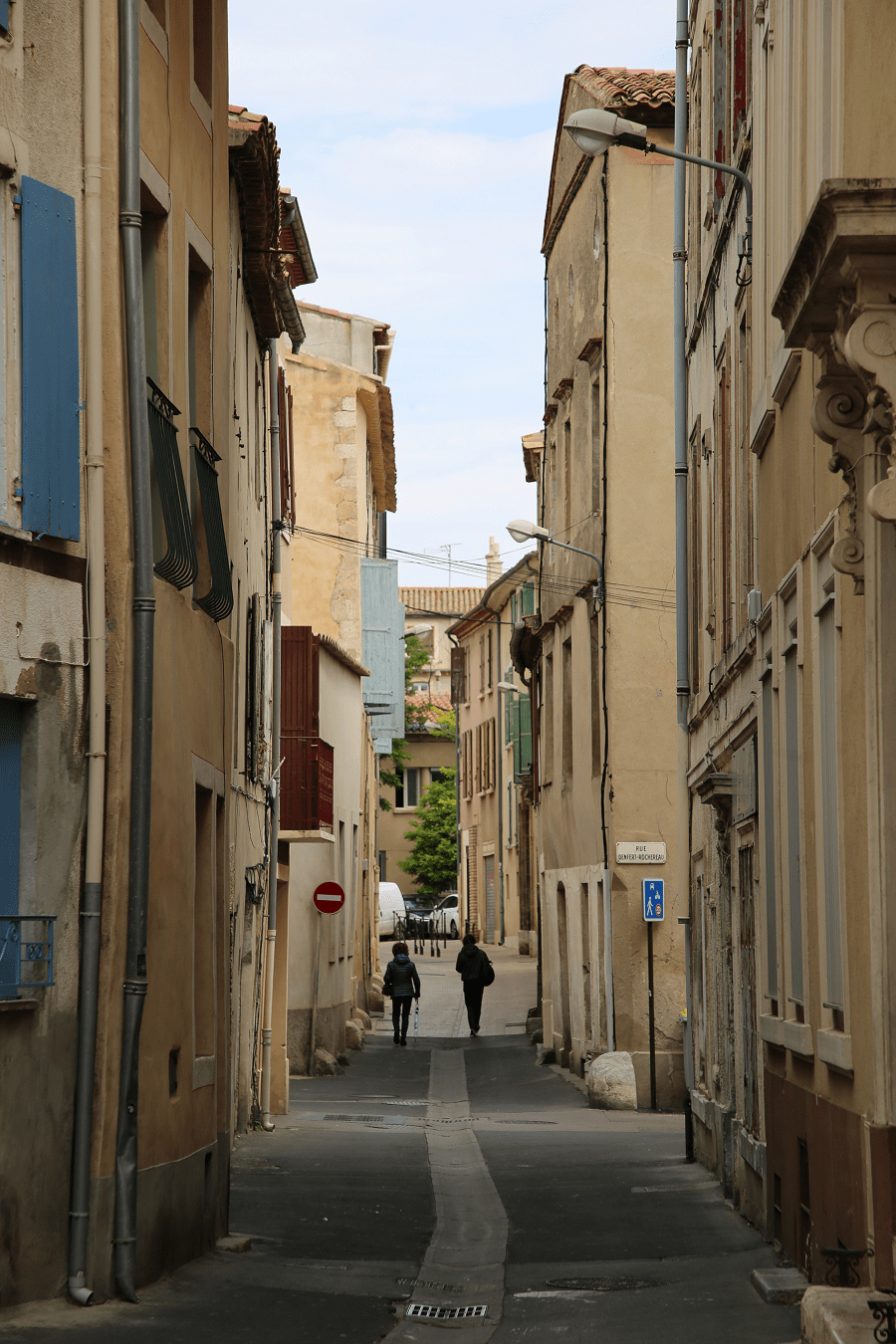 Pont des Marchands. This bridge was formed by 7 arcs (or at least 6), it was used to enter the ancient city from the south and was on the Via Domitia. The Pons Vetus bridge connected the neighborhoods of the Burg and the city. Today there is only an arch remaining, which gives us an idea of the width of the Aude river in antiquity. The first texts that mentioned the bridge spoke of merchants houses that surrounded the road. 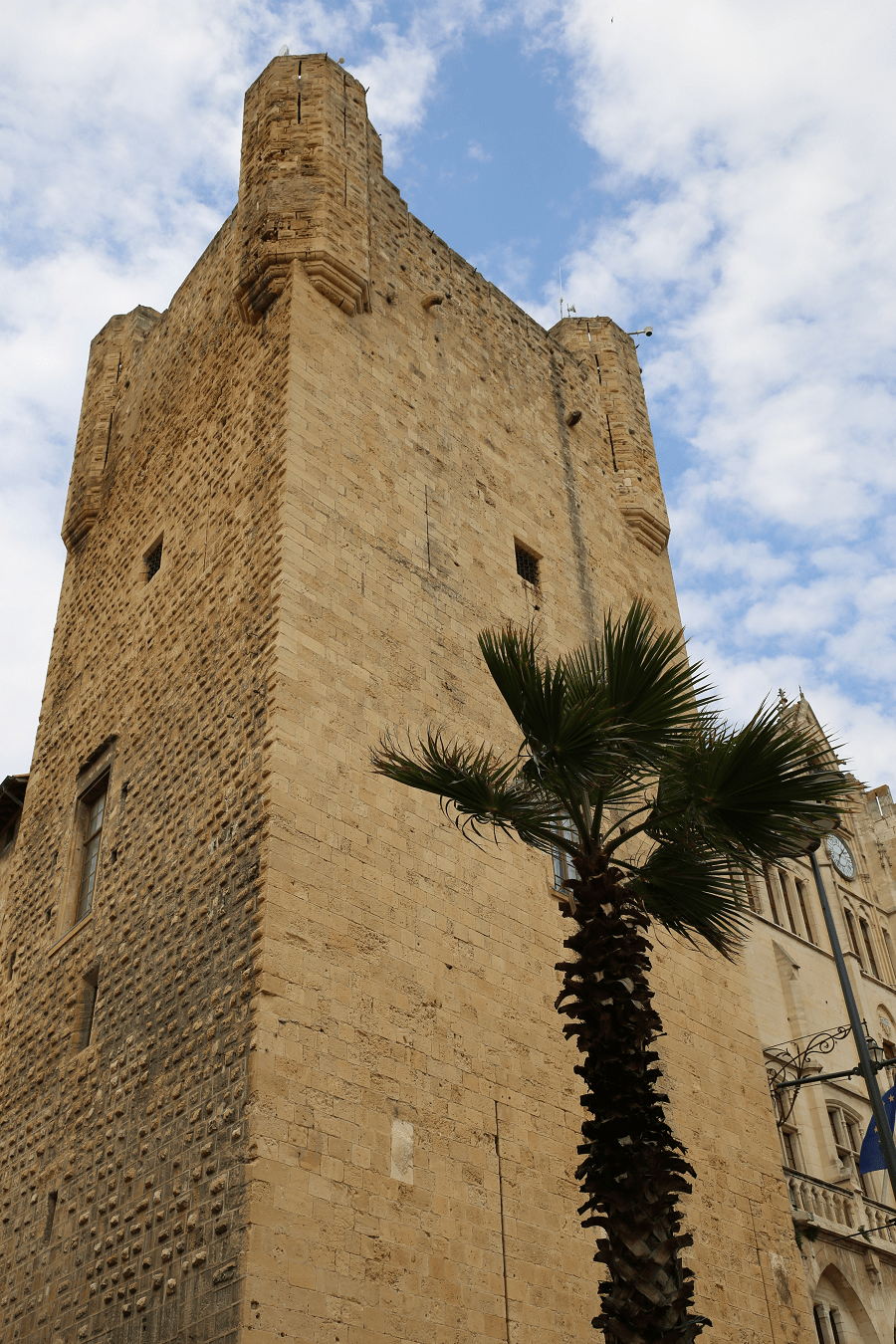 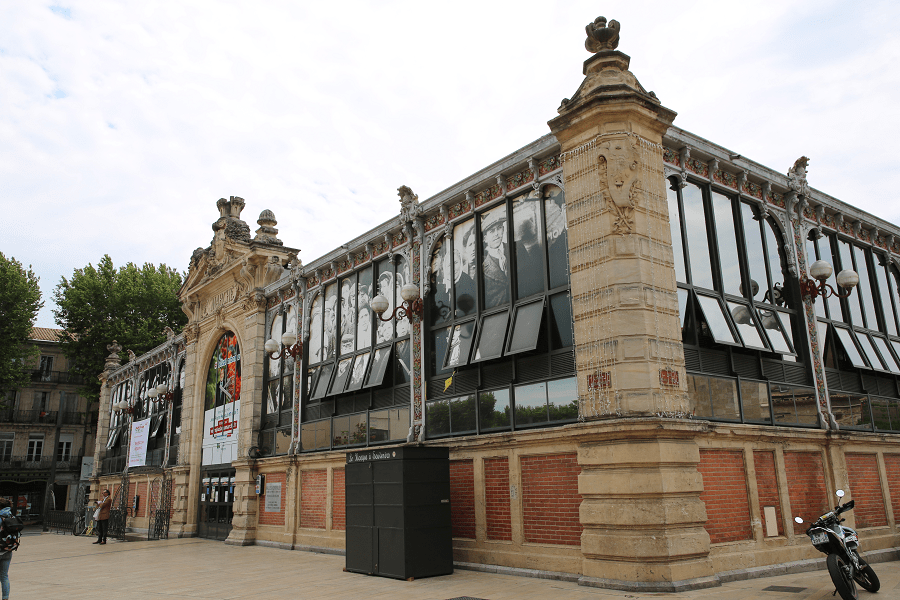 Basilica of Saint Paul. It was the first gothic church of Narbona and one of the oldest in the South. Constructed on the tomb of the first bishop of Narbonne, Saint Paul, his crypt corresponds to the ancient Paleochristian cemetery (3rd and 4th centuries). Reconstructed in 1180, its heart was rebuilt in 1224. Because of a fire, in 1368 the vaults and the portico of the bell tower were rebuilt again. This religious building is characterised by the representation the Romanesque and Gothic art, mixed architecturally. Inside, there is a famous baptismal font with a frog and a capital presenting the judgment day. 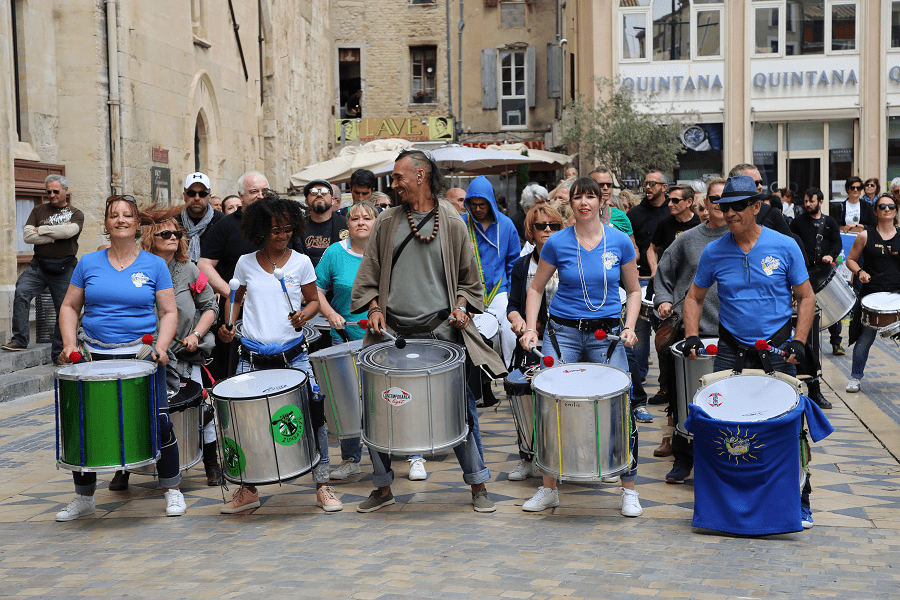 Narbonne Cathedral of Saints Justus and Pastor. The first stone of the cathedral, especially sent from Rome by Pope Clement IV, ex-archbishop of the city, was placed on 12 April 1272. Its construction stopped in 1355, due to the invasion of the city by Black Prince, and never finished. This cathedral is the fourth highest in France after those of Beauvais, Amiens and Metz. It has the highest Gothic choir in southern France, with a height of 41 meters.

The Museum of Art and History is located in the old chambers of the archbishops of Narbonne, whose rooms have been restored. It houses a set of classical paintings from the big European schools, a beautiful series of porcelain and a set of pottery (ceramics) pharmacy bottles, but also an exceptional collection, unique in France, of orientalist works. 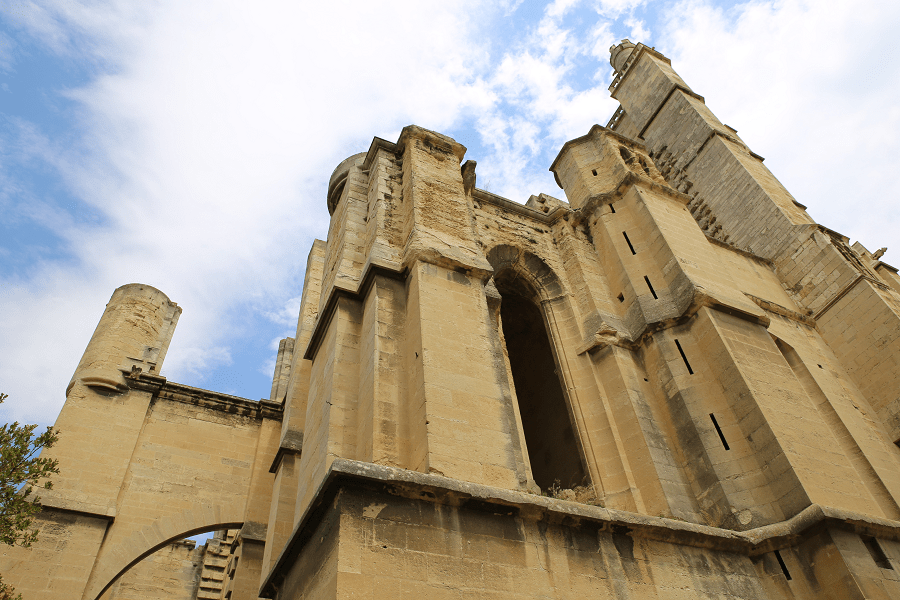 More than 350 merchants welcome you in the city centre. Main shopping areas are situated in the historic centre. The main biggest shopping mall in Narbonne is The Centre Commercial de Narbonne (Voie des Elysiques, 11100 Narbonne). 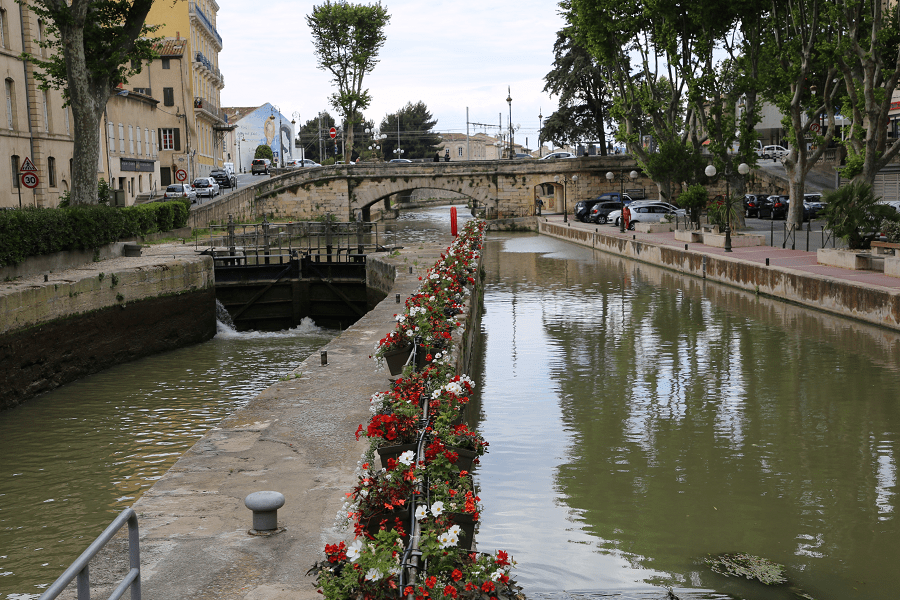 The shops usually open 7.00 or 8.00 AM and close early in the afternoon. Working days: all days of the week, Sunday included. 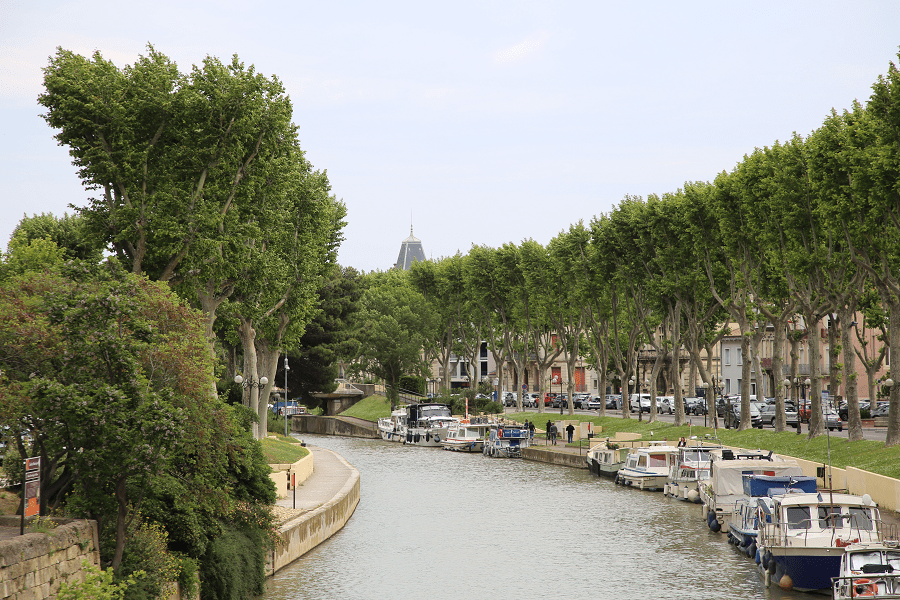 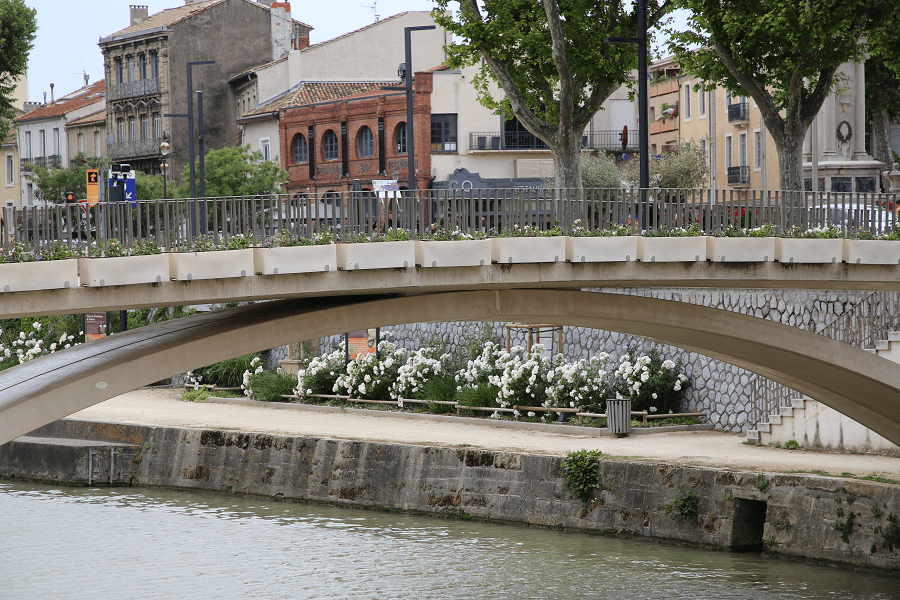 Patisserie Combot. At Rue de l’Ancien Courrier, this bakers is a Narbonne institution known for its gooey cakes and pastries – don’t leave town without trying their bouchons du Languedoc, coarse biscuits made of honey and almonds with generous helpings of pine nuts. 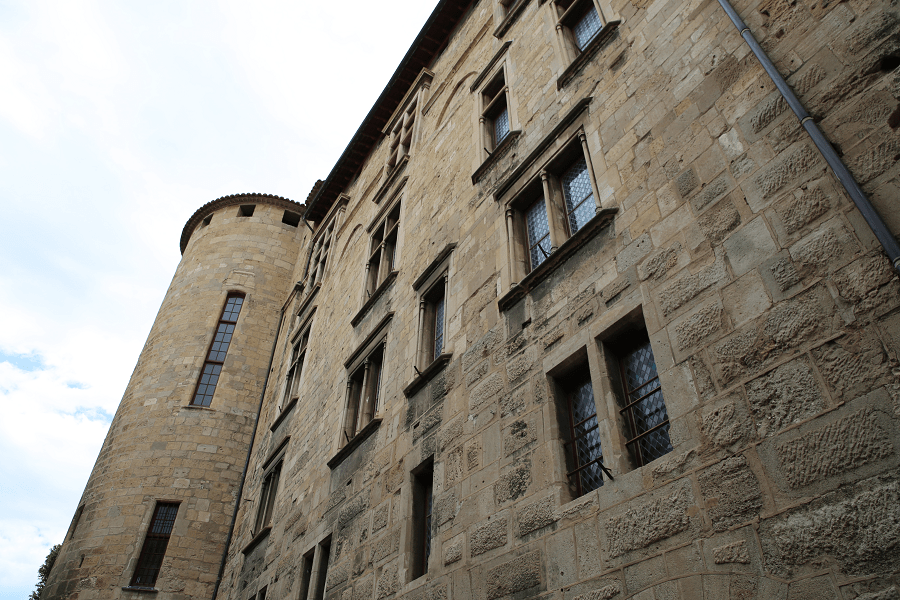 The Gare de Narbonne railway station offers direct connections to Paris, Barcelona, Toulouse, Marseille and many regional destinations. An extensive local system of buses and routes operated by Citibus.fr allow for easy public transport within Narbonne and surrounding communities. Travellers wishing to connect by plane arrive by airports in nearby Béziers, Carcassonne, Perpignan, Toulouse or Montpellier, as Narbonne does not have an airport. 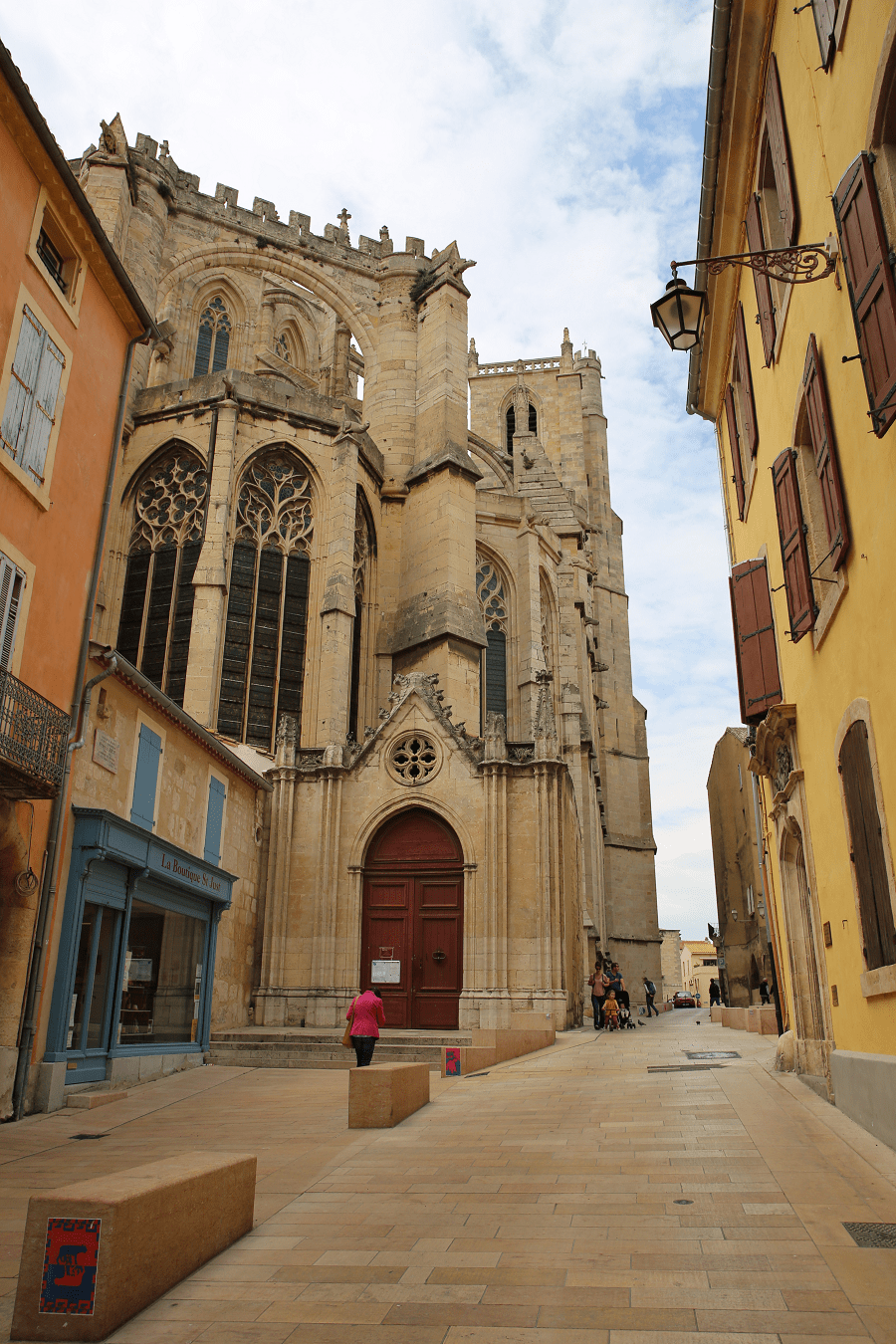