Dax (fr. Dax) is a commune in the south of France in the Landes department, in the Nouvelle-Aquitaine region. This region is part of the Gascogne historic province.

The region is known for a large number of hot springs. However, not all of them are open to the public. The Dax sources are not spa resorts, but centers of balneotherapy – a physiotherapeutic procedure consisting of treatment with mineral waters and recommended only by doctors. 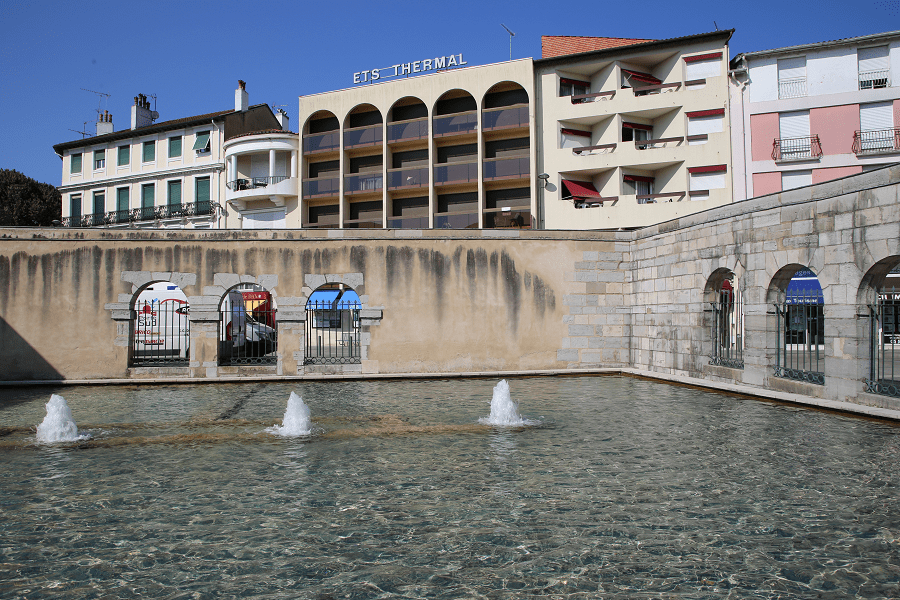 Dax sources were incredibly popular with the Roman rulers. Healing springs became available for ordinary people only in the XVIII century and Dax received the second unspoken “Happy City” name at that moment.

There are about 18 thermal stations with therapeutic mud as well as hotels and resorts almost throughout the city. Thanks to the nearby Adour River, Dax produces about 1,500 tons of therapeutic mud annually, being the largest European supplier. 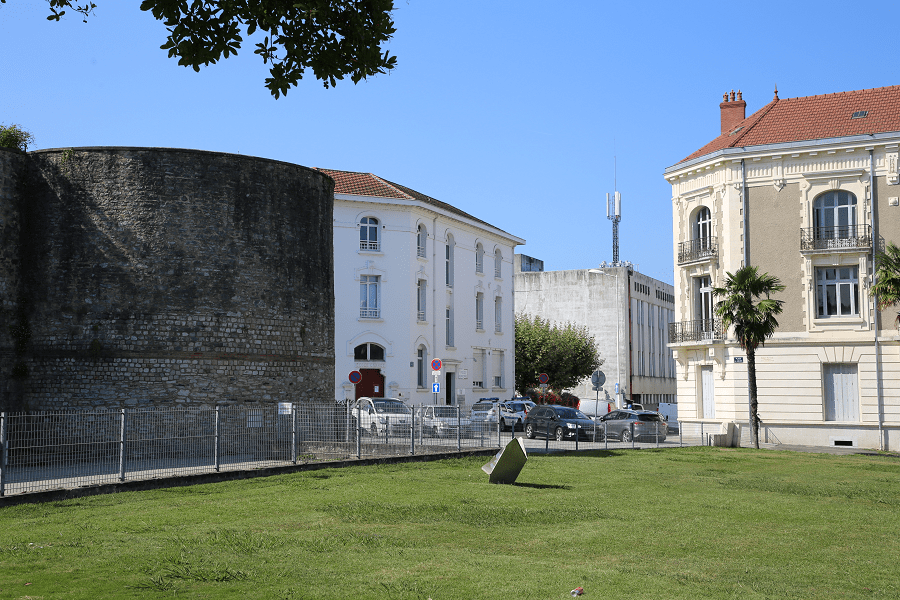 The town of Dax’s emblem depicts a tower (a symbol of a fortified town), a lion (a symbol of Aquitaine), and waves (the Adour River, which has its own river port). The town’s motto – “Regia Semper” (“Always Royal”) – is the motto of a free town which has always been under royal tutelage.

The climate is typical of the entire Atlantic Ocean coast here but it is hotter in summer and cooler in winter than in the Bay of Biscay. Summer is hot and long, autumn is very mild and rather sunny, winter is warm but rainy, and spring is late (May is not warmer than October) and very rainy. 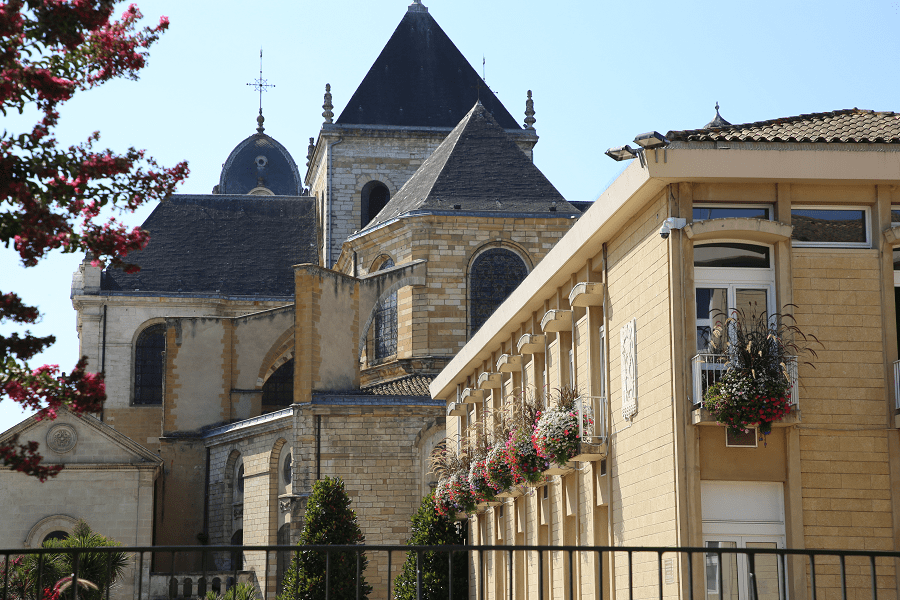 The town’s name was Aqua Tarbellis initially, which means “water of Tarbell” (les eaux des Tarbelles), then it was renamed Acqs in the Middle Ages, and then it became known as Dax.

Dax is a town famous not only for thermal springs. It was a favorite place for French and Spanish bullfighting previously. A rugby sports club appeared in the town later in 1904. 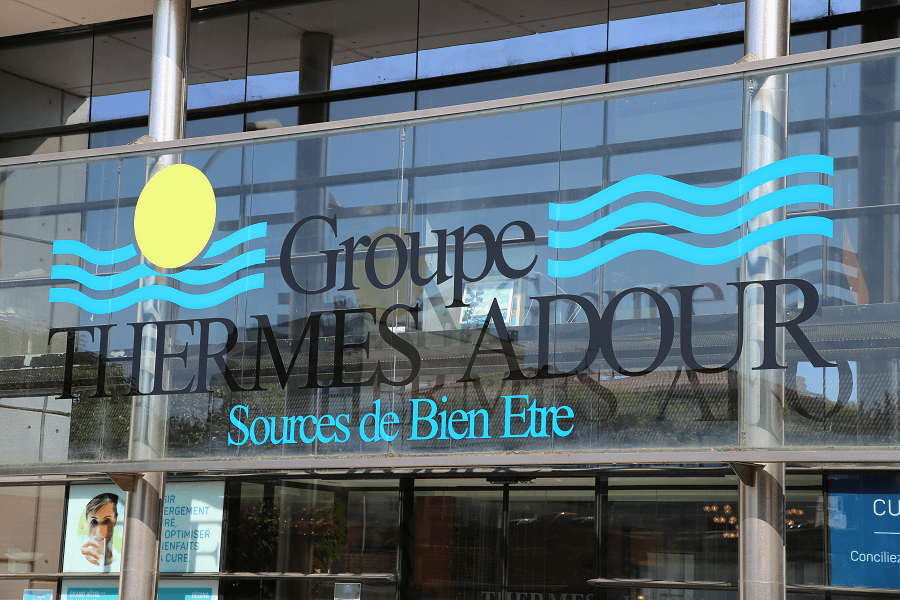 Dax is surrounded by prehistoric places: le Lanot, le Gond, and l’Oustalot. Many remains of ancient civilizations were found in the town center during construction work, indicating that the town was inhabited before the Christian era.

The first mention of the town dates back to 297 – it was made in the “List of Verona” (contains an accurate list of provinces and dioceses of the Roman Empire under Diocletian, the Roman emperor, who ruled from November 20th, 284 to May 1st, 305). 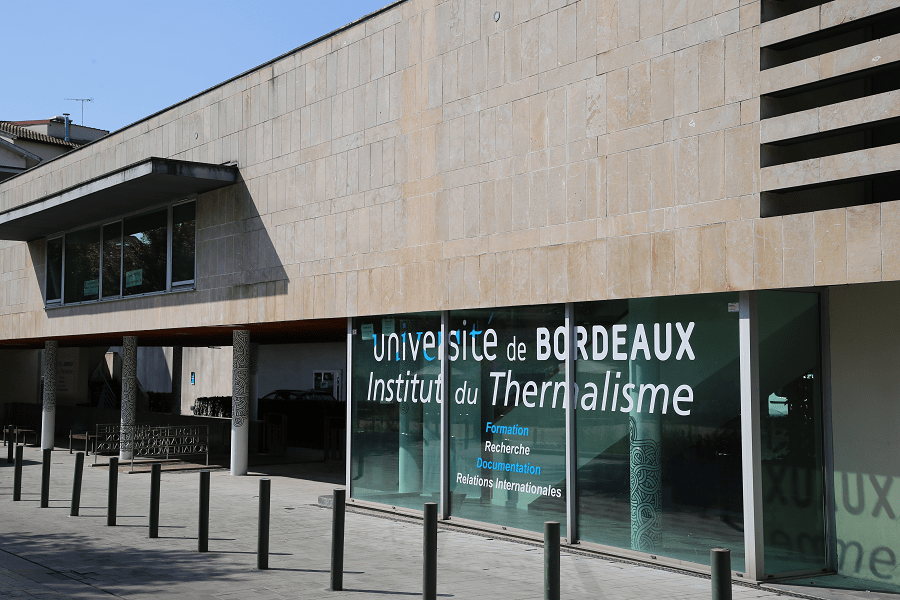 The next mentioning dates back to the year 400 – in the Notification of the Gauls’ provinces and cities.

This town’s name was Civitas Aquensium in Novempopulanie, a province of the Nine Peoples (Neuf Peuples), and its inhabitants’ name was Cives Aquenses.

The Dax episcopal sees foundation dates from the middle of the 3rd century: Saint Vincent de Xaintes was the first bishop and martyr of Dax.

A 1465 m long town wall covering about 12-13 hectares was erected in the middle of the IV century.

Viscounts of Dax governed the town, they ruled until Navarrine, the only daughter of the last Viscount of Dax, Pierre II, who married Raymond-Arnaud II, son of Viscount of Tartas Raymond-Robert II in 1190. 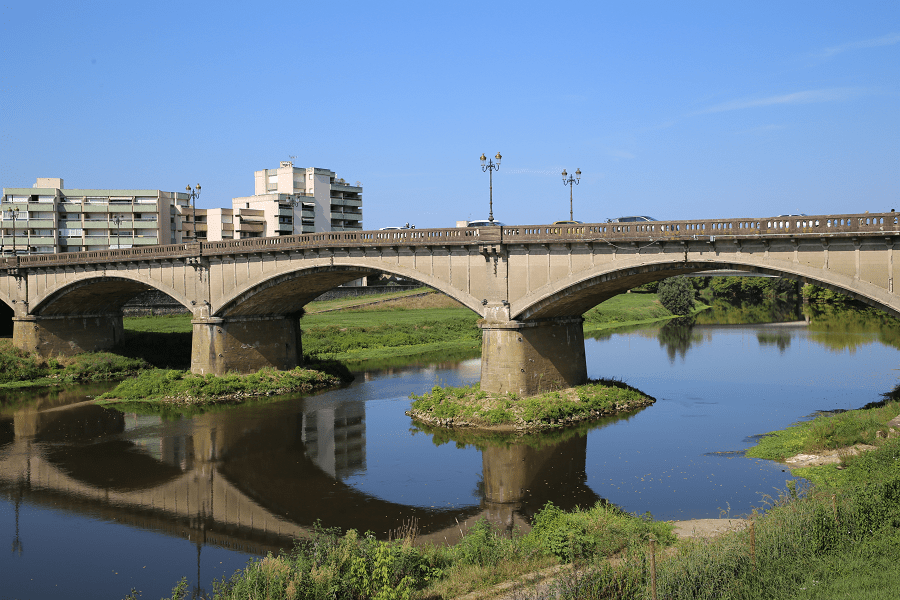 After the marriage of Assalide, daughter of the last Viscount Tartas and Dax, with Amanieu V, sire d’Albret, the title of Viscount of Dax passed to the house of Albret, who ruled Navarra from the 15th century. Thus, the Viscounts of Dax were in consanguinity with the Dukes of Gascogne and were their direct vassals, as were the Viscounts of Tartas.

The marriage of the King of France Louis VII Jr. (Louis VII le Jeune) and the Duchess Eleanor of Aquitaine (Aliénor d’Aquitaine) was dissolved in 1152. Eleanor married Henry II Plantagenêt in the same year, and he became King of England in October 1154. Thus, all the provinces of the south-west of France passed to the English crown. The kings of England dominion, who had the status of duke kings here, lasted until 1453, until the end of the Hundred Years War.

Dax was located on the border between two geographical zones, which had a different economic orientation but a common language at the same time. This border ran along the Adour River which previously could be waded across. 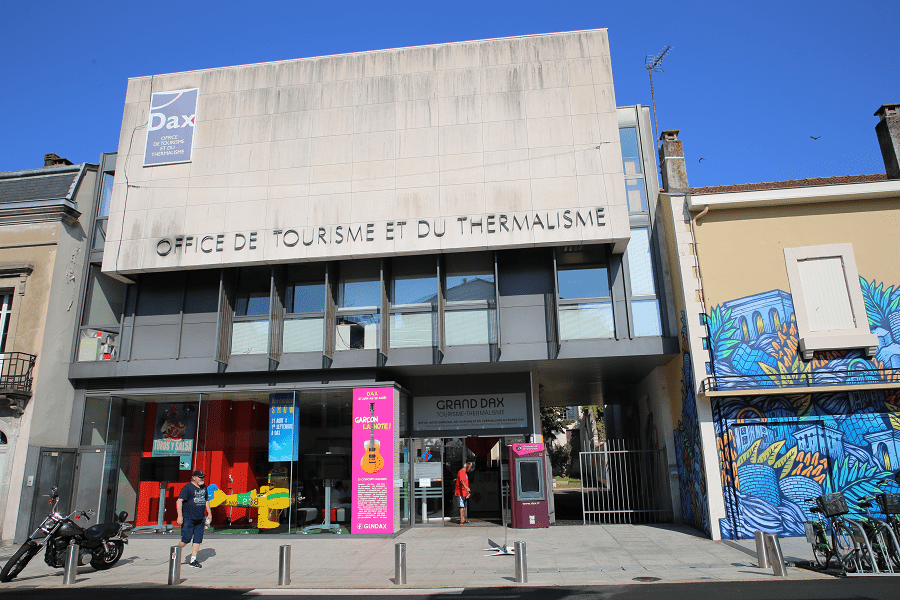 The Romans built a bridge here which turned out to be approximately in the middle of the Roman road between Bordeaux (Aquitaine) and Pamplona (Spain). This road was subsequently used by both the King of Francs Charlemagne and pilgrims traveling to the Apostle Jacob’s grave (the famous pilgrimage road to the Spanish city of Santiago de Compostela is a UNESCO World Heritage Site).

Adour remained virtually the only trade route for many centuries, and the bridge in Dax was the only place crossing Adour since the river banks were swampy.

Fortified by the Romans, Dax remained a town of important strategic, commercial, administrative and religious significance for centuries. 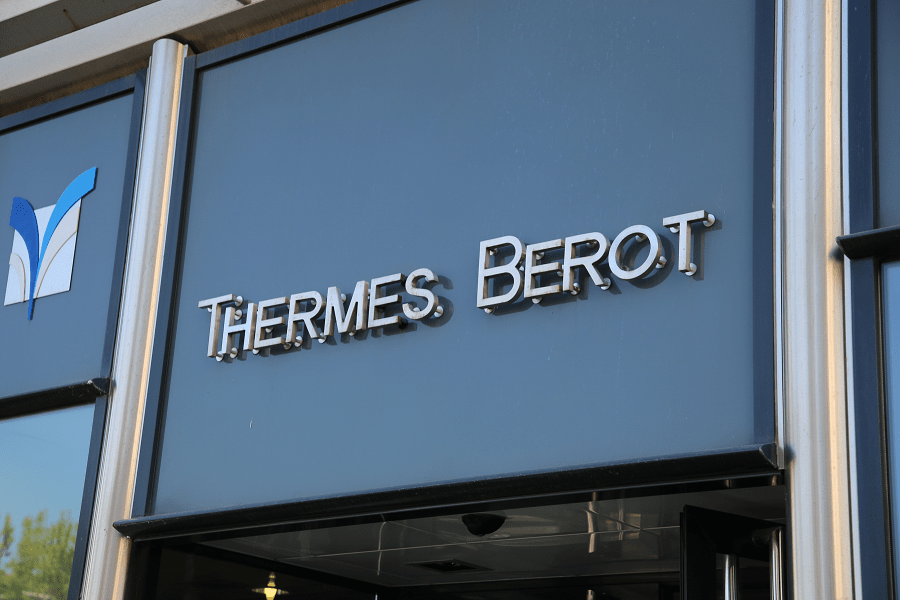 Dax was captured by the French during the reign of England – this happened in July 1451, when Count Foix captured Dax on behalf of King Charles VII.

King Louis XI confirmed the town privileges with his royal letters after his coronation in 1461.

Dax was also called the “Chalosse capital,” the Gascogne region, known for its fertile lands, and was an important economic center, where 16-day fairs were held twice a year and weekly markets on Mondays (from March 1368) took place. The town, located on the old Dax-Pamplona trade route, was indeed one of the most important towns in Gascogne, along with the cities of Auch and Bayonne.

Numerous buildings completed in the last three centuries of the Middle Ages testify to the town’s spiritual development: the 13th-century Dax Cathedral (cathédrale Notre-Dame), the “canonical” houses, as well as the town hall, which is one of the oldest in France (the first mayor’s name was Pierre de Saint-Paul).

The Spaniards occupied Dax after the British, despite the fact that the town, which was besieged in 1521-1522, resisted bravely. 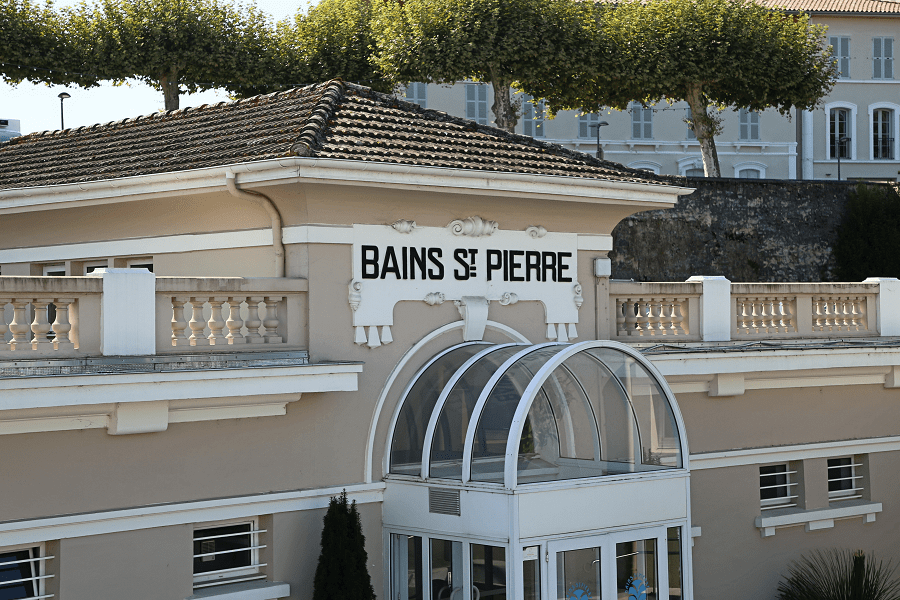 XVI century was the period of religious wars, epidemics, and great poverty.

Prosperity returned to the city in the XVII and XVIII centuries, as evidenced by a number of new houses that were built in the town center.

Privileged people visited the town in 1659, as the hot springs attracted them. Louis XIV stayed in Dax on the eve of a meeting with his fiancee, infante Marie-Thérèse, whom he was about to marry in Saint-Jean-de-Luz.

The thirst for knowledge flourished in the town in the period preceding the French Revolution. It was in such an intellectual atmosphere in Dax that Jean-Charles de Borda was born in a house on the street bearing his name, rue de Borda in 1733. Mariner, mathematician, and world-famous physicist, he is known for his achievements in the field of geometry. A training ship is named after him, and a monument in his honor by Georges Guiraud is installed in his native town, Dax on Thiers Square (Place Thiers). 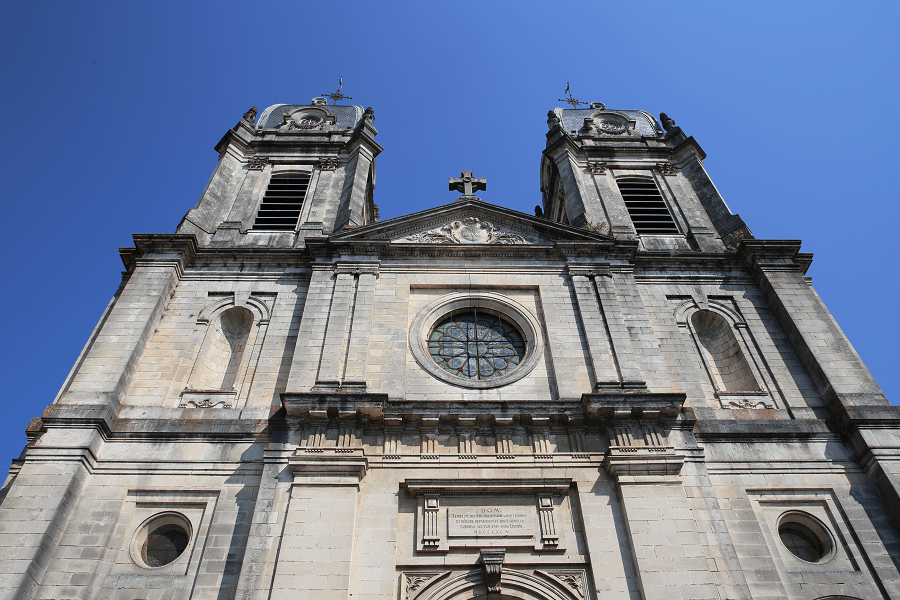 The Landes Department was created by a merger of most of the Gascogne provinces. The city of Bayonne was annexed to the Lower Pyrenees at the same time.

The former importance of balneology was revived in France during the Second Empire (XIX century). Accessibility into Dax has improved significantly, in addition, thanks to the Paris-Bordeaux-Dax-Irun railway line construction turning the Landes Suprefecture into a major railway junction.

The neighboring Saint-Vincent-de-Xaintes commune was included in the Dax commune in 1861.

The Dax authorities decided to tear down part of their town fortifications and destroy the Viscount of Dax’s medieval castle in the ХХ century, in order to open up to the outside world. They built luxurious art deco buildings in exchange to attract wealthy clients to the local thermal springs. Among these new buildings were the casino and the Splendid Hotel, which were erected in the 1928-1932 period with the participation of the Gironde architect Roger-Henri Expert. 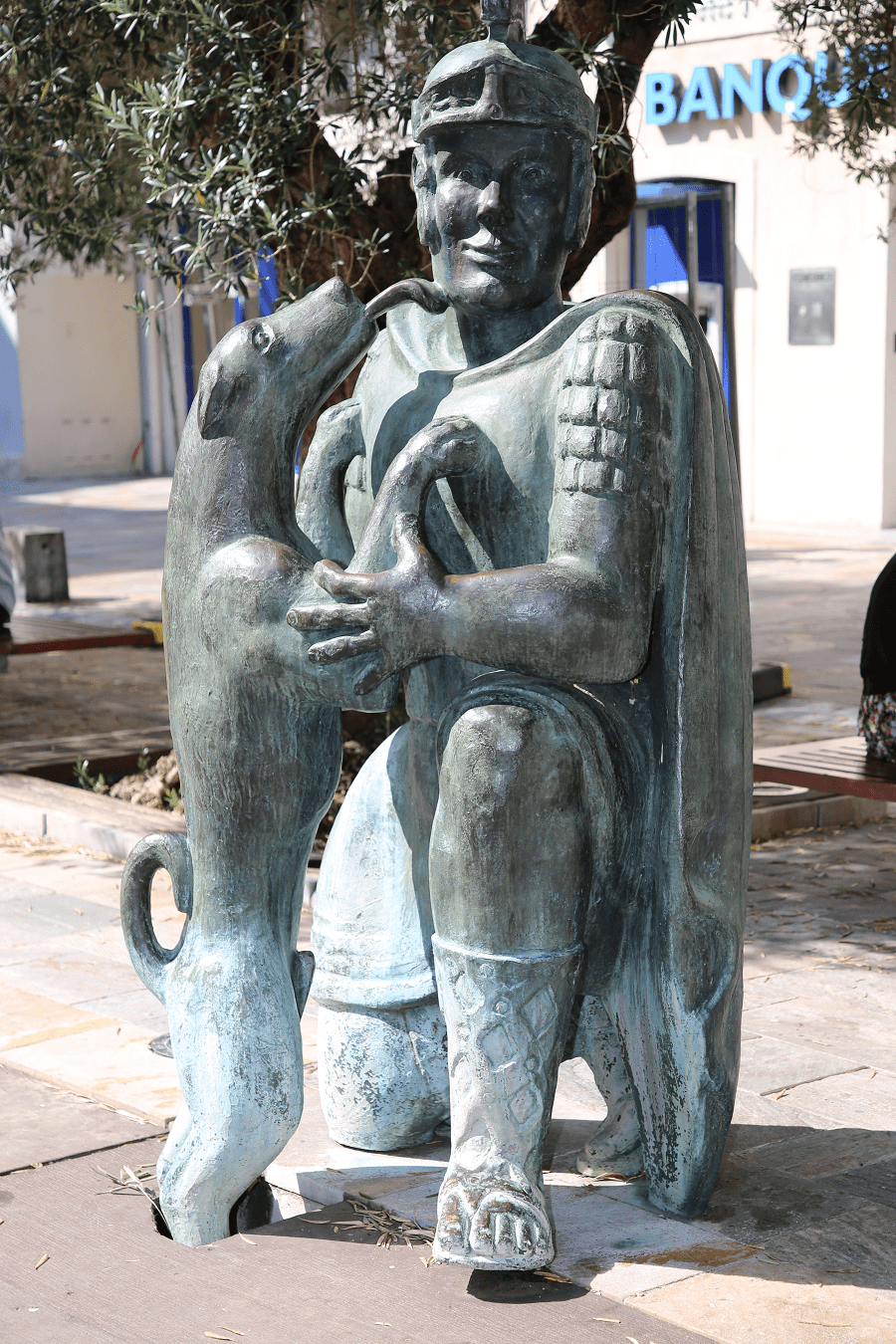 Many famous people have bathed in this Gascon town since the XVIII century: Henri Bergson (one of the greatest philosophers of the XX century), Georges Clemenceau (Prime Minister of France), Maurice Utrillo (artist), Sarah Bernhardt (actress), Sacha Guitry (playwright), Armand Fallières (French President), Nicholas I (King of Montenegro), and many others.

Wood tar, the Gascon Landes’ main product was sold throughout Dax. Tenders were held in Dax until 1939 during which rosin and turpentine wagons were shipped to Europe. A direct link was established with Atlanta in the United States, the second world center for trading in tar stock.

This activity was significantly reduced after the Second World War when petrochemical products came to replace wood tar. 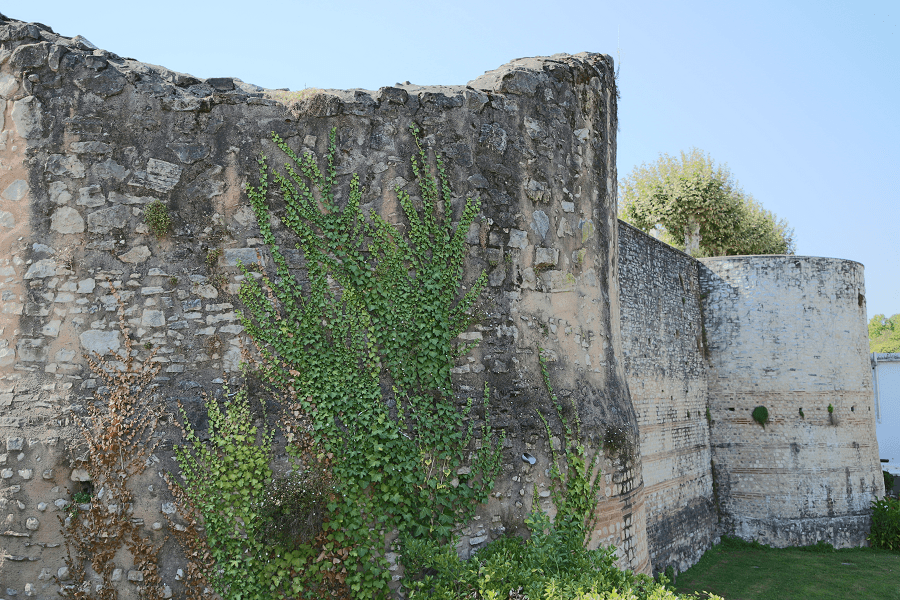 It should be noted separately that Dax is a very sporty city: there are about 70 sports clubs for ten sports complexes. The rugby club, basketball and football clubs are among them. Dax has its own Saint-Paul-lès-Dax racetrack.

Tourism, sights and what to see

Dax Cathedral (Cathédrale Notre-Dame) was built at the end of the XIII century, during the town’s time of prosperity. The Gothic building collapsed in 1646 and was rebuilt in a neo-Greek style at the end of the XVII century. The magnificent “ogival shape door”, known as the “Apostles”, an organ closet and paintings has been preserved to this day.

Saint Vincent Church (Saint-Vincent-de-Xaintes) was named after the first bishop of the town. Built on the site of an 11th-century basilica, the current neo-Romanesque church dates back to 1893. The saint’s life can be traced in the beautiful central stained-glass windows of the sanctuary. 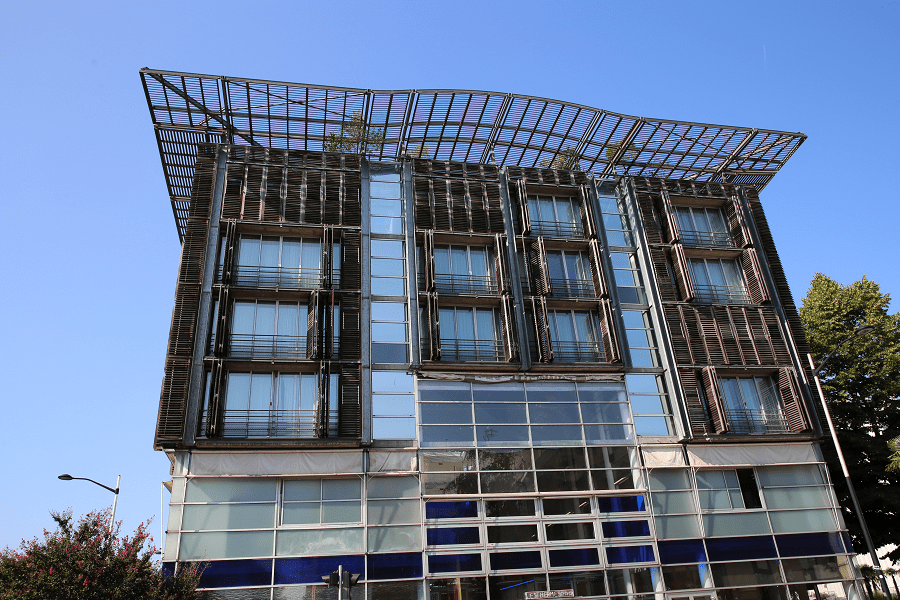 Behind the church on Gambetta street (rue Gambetta) is the Dominican monastery, which in the 16th century was female and was called Couvent des Clarisses.

There is the Hôtel Saint-Martin-d’Agès, an old 17th-century mansion in the historical center. Anna of Austria and Cardinal Mazarin stayed here in the years 1659-60. 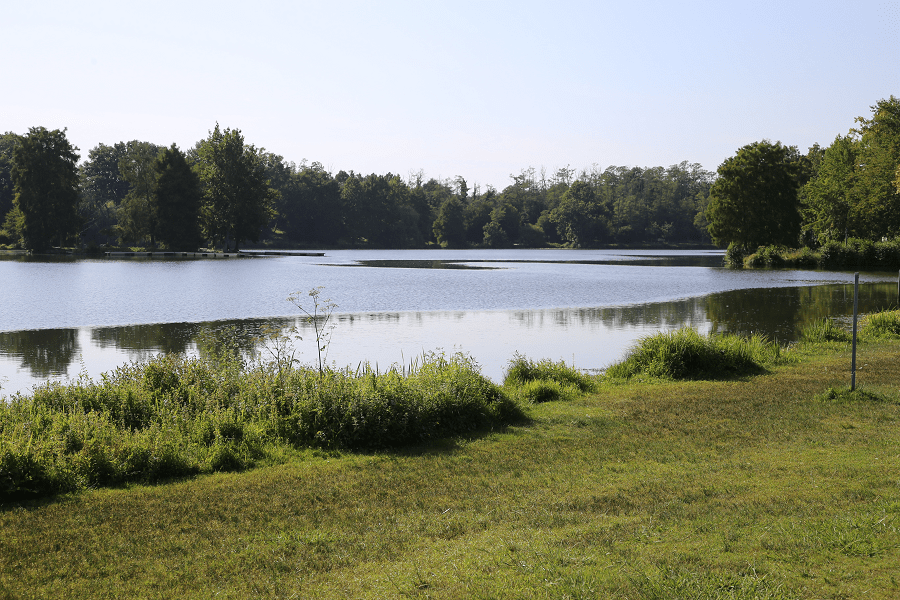 Rue des Archers Street is located in the historic center. This is a street of ancient houses from the XVII, XVIII and XIX centuries with elegant facades and beautiful front staircases. The street names bring back the city’s past: Neuve Street (rebuilt after the Great Fire of the XVI century), Cordon Bleu Street (named after the Cordon Bleu Hotel of the same name), Carmel Street (there was a Carmel monastery in the past, from which the chapel was preserved)…

Hot Fountain (La Fontaine chaude). Its second name is Source de la Nèhe in honor of the Scandinavian goddess of waters, Nehe. This fountain is a symbol of the town. It was built in the XIX century on the ancient Roman baths alleged site. The water temperature is 64° С. The daily water rate is 2400000 liters! One can see algae bloom in the fountain’s pool. These algae are used in the production of cosmetics (le Péloïde de Dax).

There used to be many butchers’ quarter around the hot fountain previously. Housewives used the hot water from the fountain to cook eggs or pluck poultry feathers. 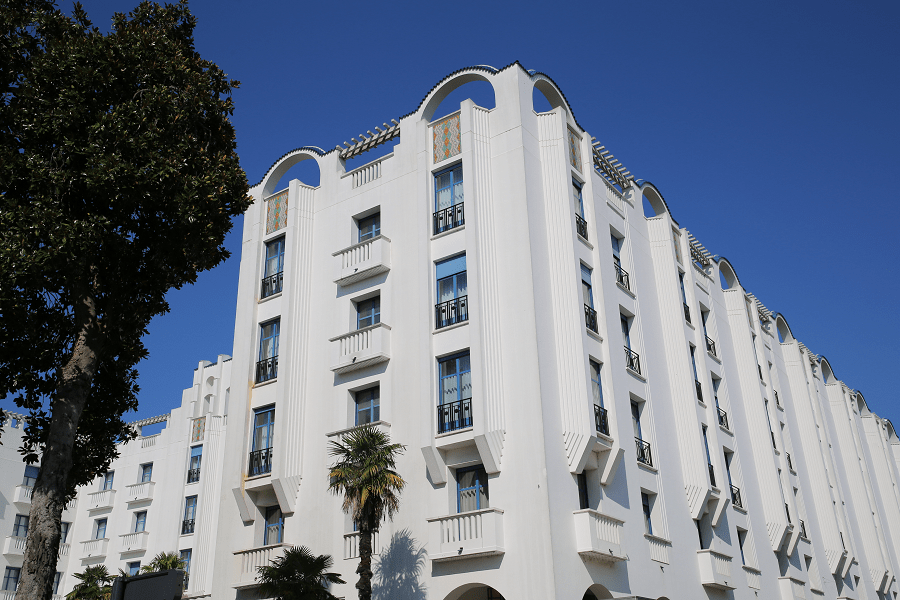 Trou des Pauvres (hole of the poor), a place on the river Adour banks is among other interesting places. The homeless and sick came there to swim and be treated at one time.

Dax Arenas (Arènes de Dax) are the bullfighting arenas, built in 1913, and expanded in 1932. Bullfights were held on the town holiday (from August 15) and the Toros and Salsa festival, which was held on the second weekend of September. 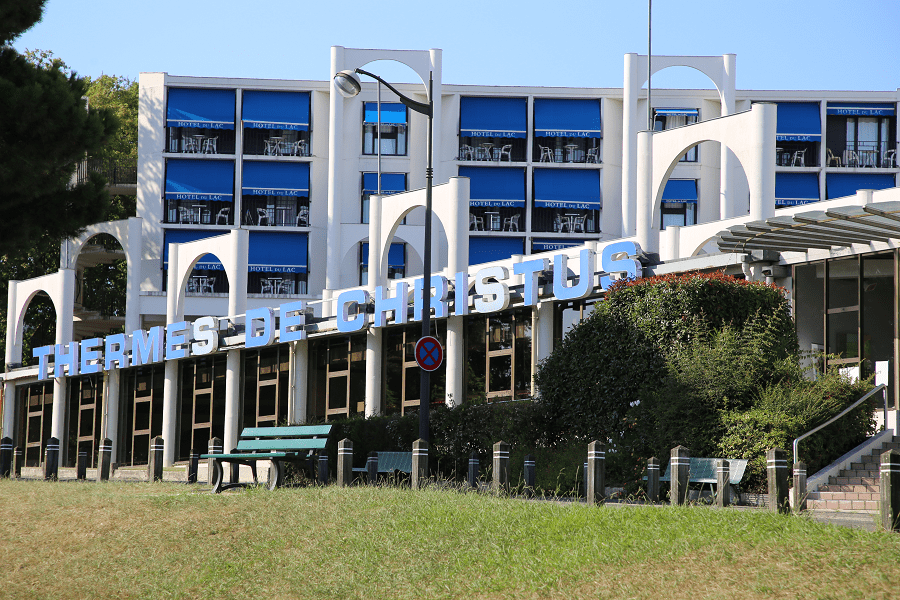 Other sights of the city are the archaeological crypt (the second century Gallo-Roman temple remains are stored here), the Borda Museum (located in the chapel of the former monastery), the Army and Helicopters Museum, the Georgette Dupouy Museum (contains works by this French artist), as well as Sarrat Park with rare trees and bushes.

In Dax you can find, Galeries Lafayette, Gifi and Grand Mail shopping centers and Sud express. Women’s clothing stores are among the largest stores but there are numerous private shops and souvenir shops located in the town center as well. 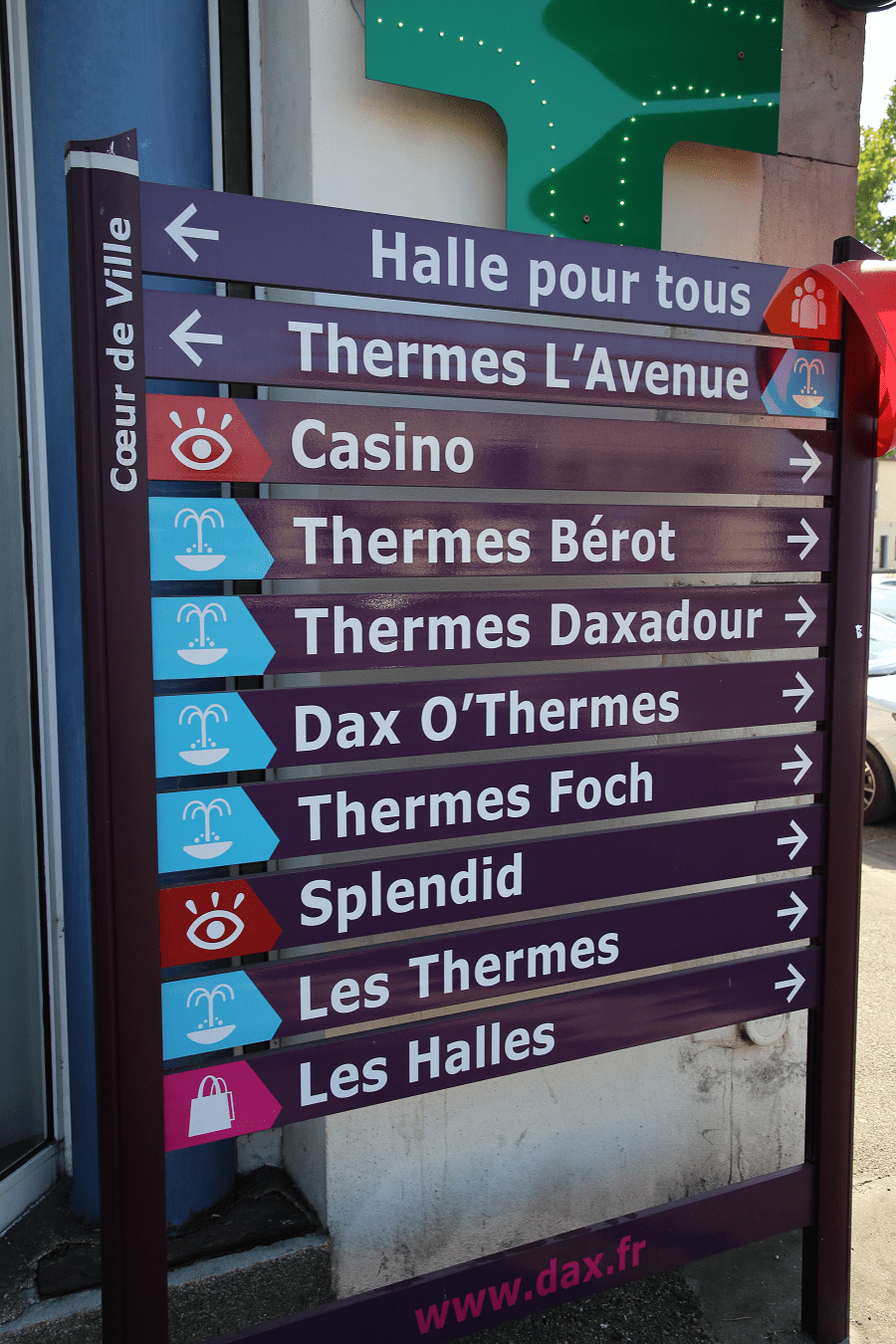 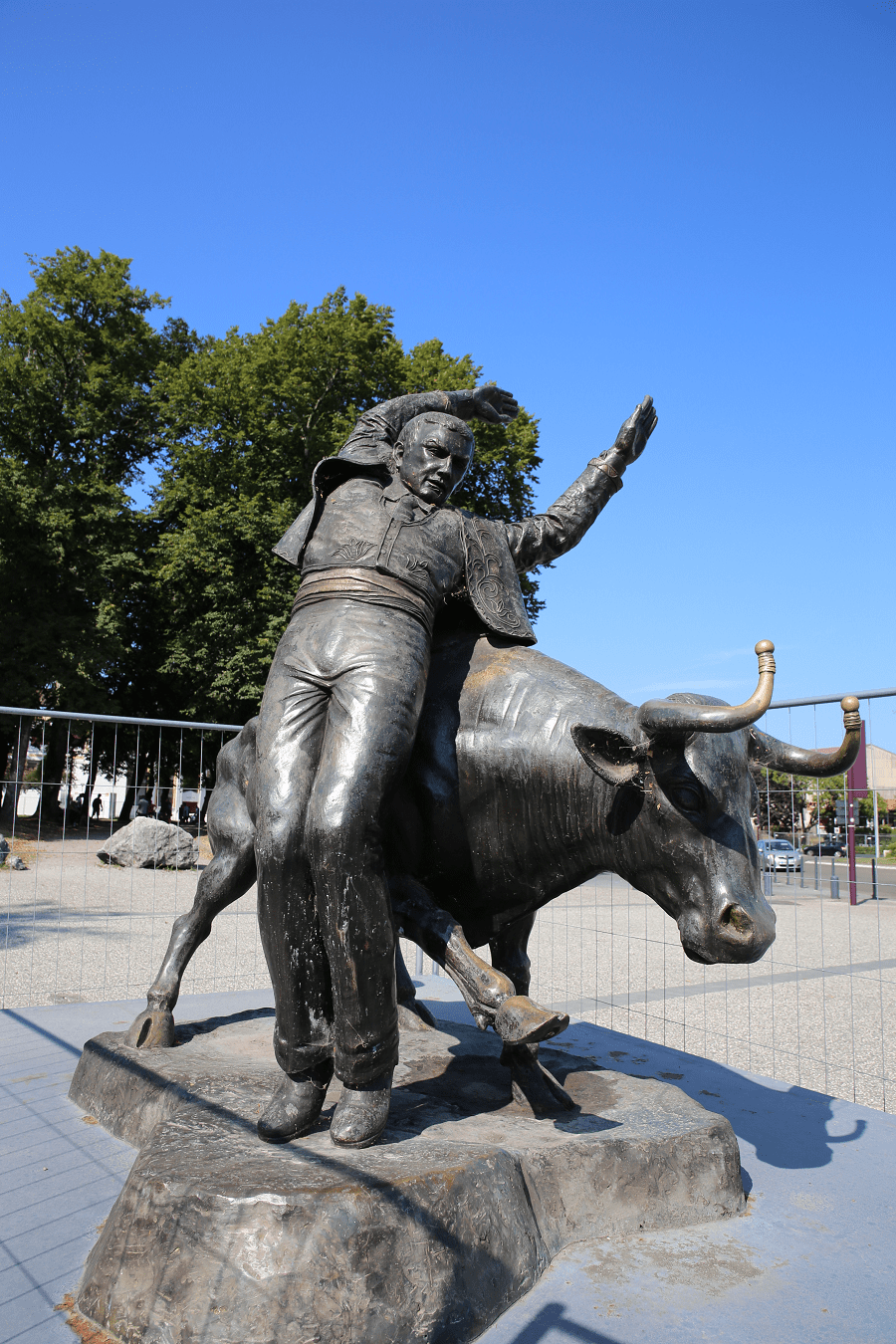 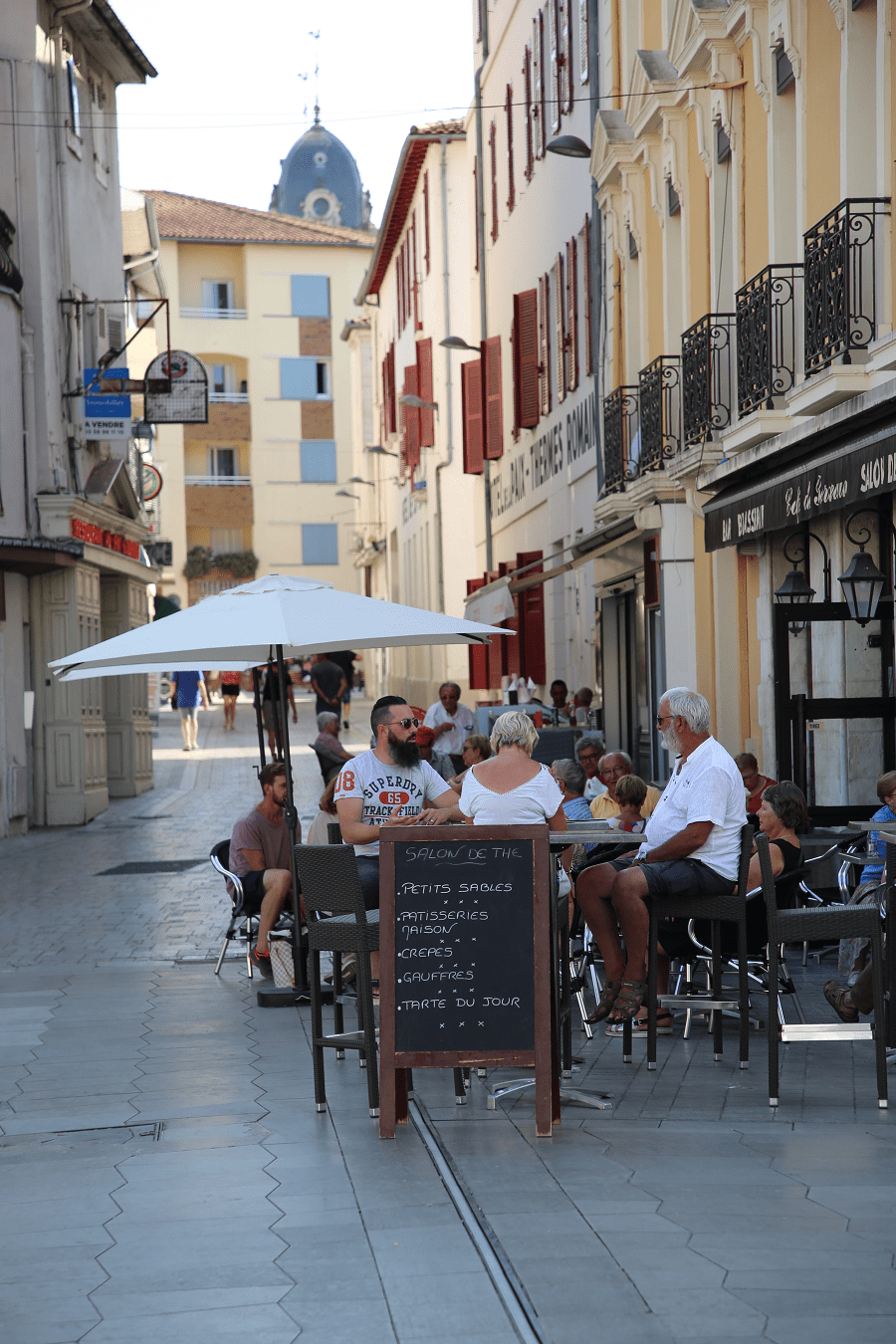