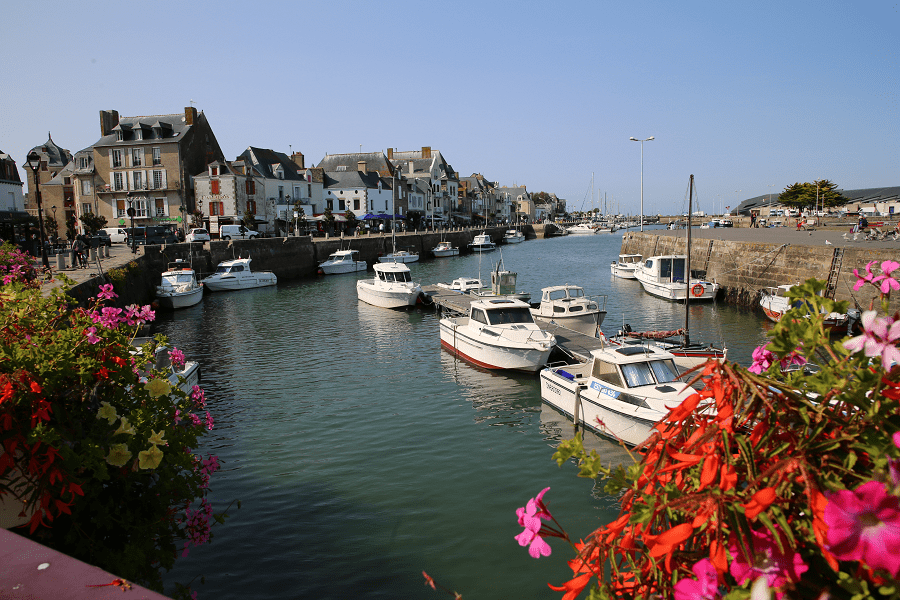 Le Croisic (Fr. Le Croisic) is a commune in western France, located in the Loire-Atlantique department in the Pays de la Loire region.

Located on a granite island that remained separate from Batz-sur-Mer and the mainland until the ninth century, it is now part of the wild coast of the Guérande peninsula. With the exception of the narrow isthmus that connects it to Batz-sur-Mer in the south-east, the territory of the town is surrounded by water, alternating beaches and cliffs exposed to the Atlantic Ocean and a port protected by the jetty of Tréhic. 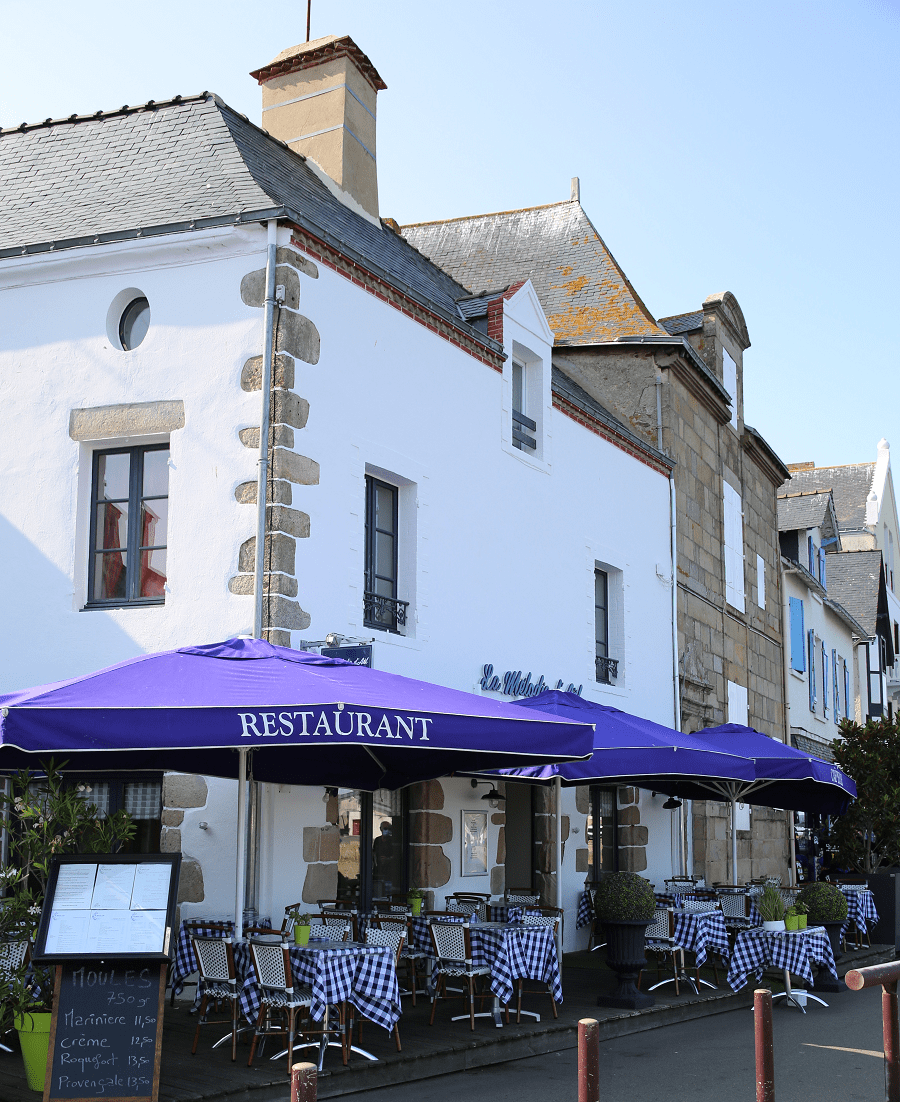 This privileged situation justifies the presence of Man from the end of the Palaeolithic; the territory was the subject of frequent fights between the Romans and successive hordes of invaders until the fifth century, when Le Croisic became one of the favourite resorts of Saxon sailors. In the Middle Ages, the locality enjoyed an economic ease ensured by its maritime activities and an important political aura gained by its unfailing support for the Duchy of Brittany and then for the Kings of France. 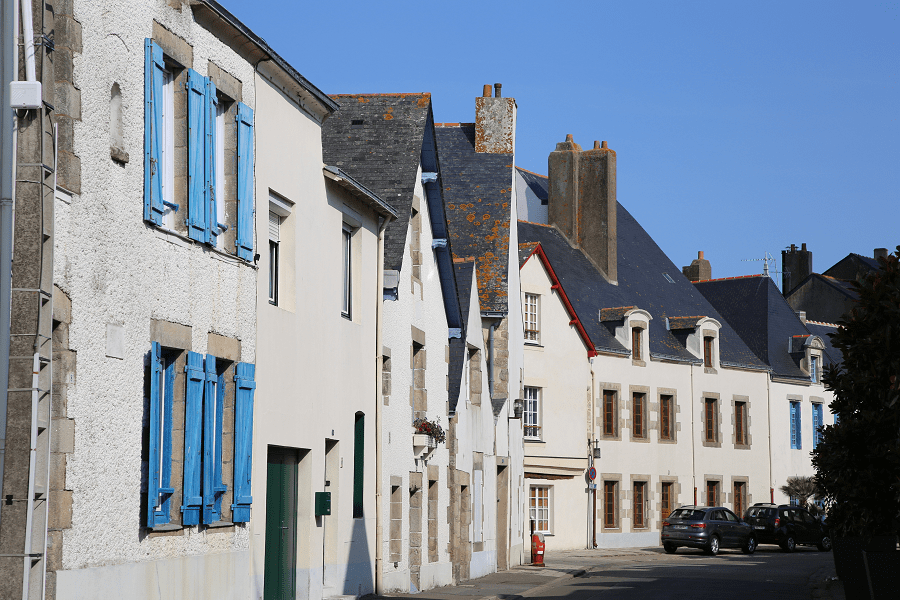 In the nineteenth century, Le Croisic took advantage of the craze for sea bathing to diversify the origin of its economic resources and to modernize, attracting many celebrities like Alfred de Musset or Honoré de Balzac.

In the twenty-first century, Le Croisic was faced with the significant aging of its population. With still significant maritime resources and a quality protected or inventoried natural environment (ZNIEFF), distinguishing the coastal areas and those of the salt marshes, the city has turned to tourism by promoting its rich architectural and traditional heritage.

Many personalities from the maritime world, from Nicolas Bouchart to Jacques-Yves Le Toumelin, or from the artistic or scientific field, such as Ferdinand du Puigaudeau or Henri Becquerel, have left their mark on history and made the reputation of the locality. 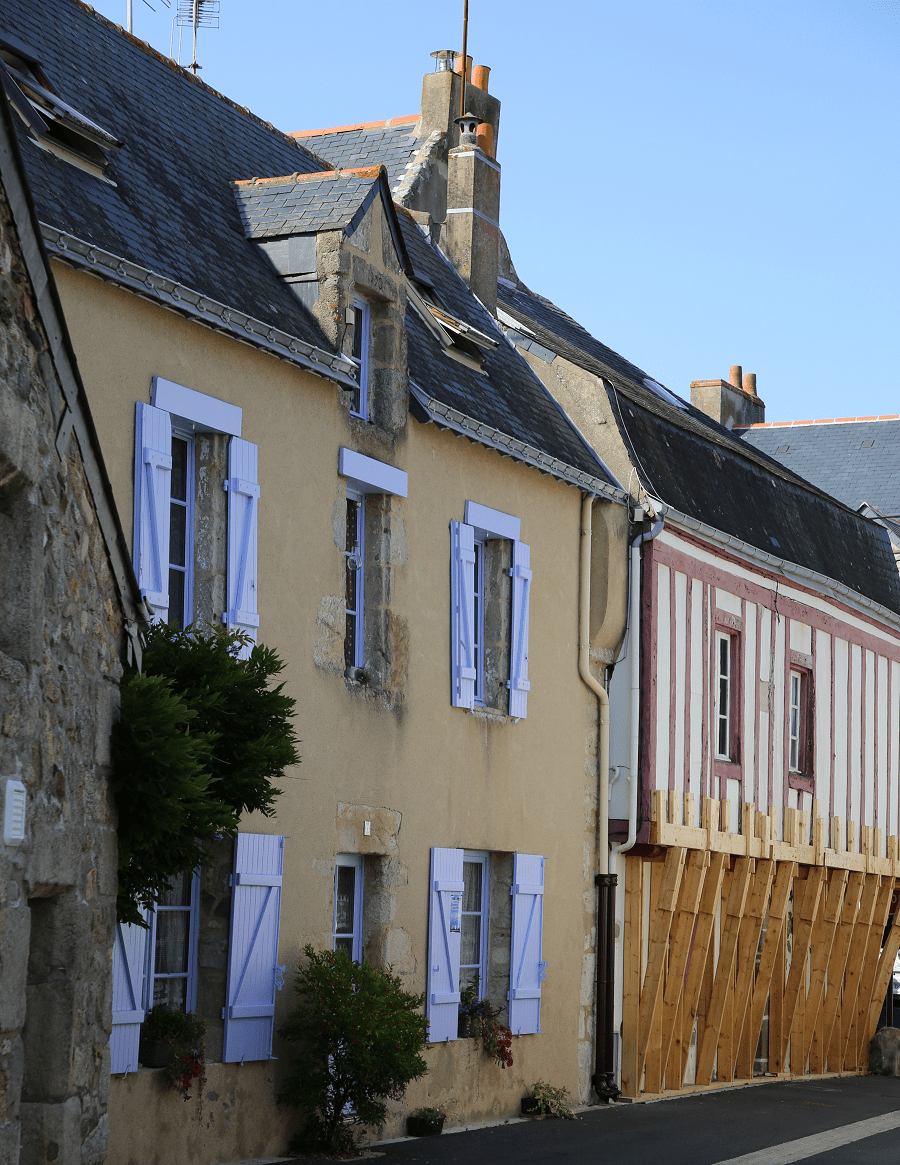 The centre of Croisic contains nearly 60 old houses and 25 of them are concentrated on 600 of the 2,400 m of quay, facing the port. The Ministry of Culture has classified five of these houses whose construction is spread out from the fifteenth to the seventeenth century. 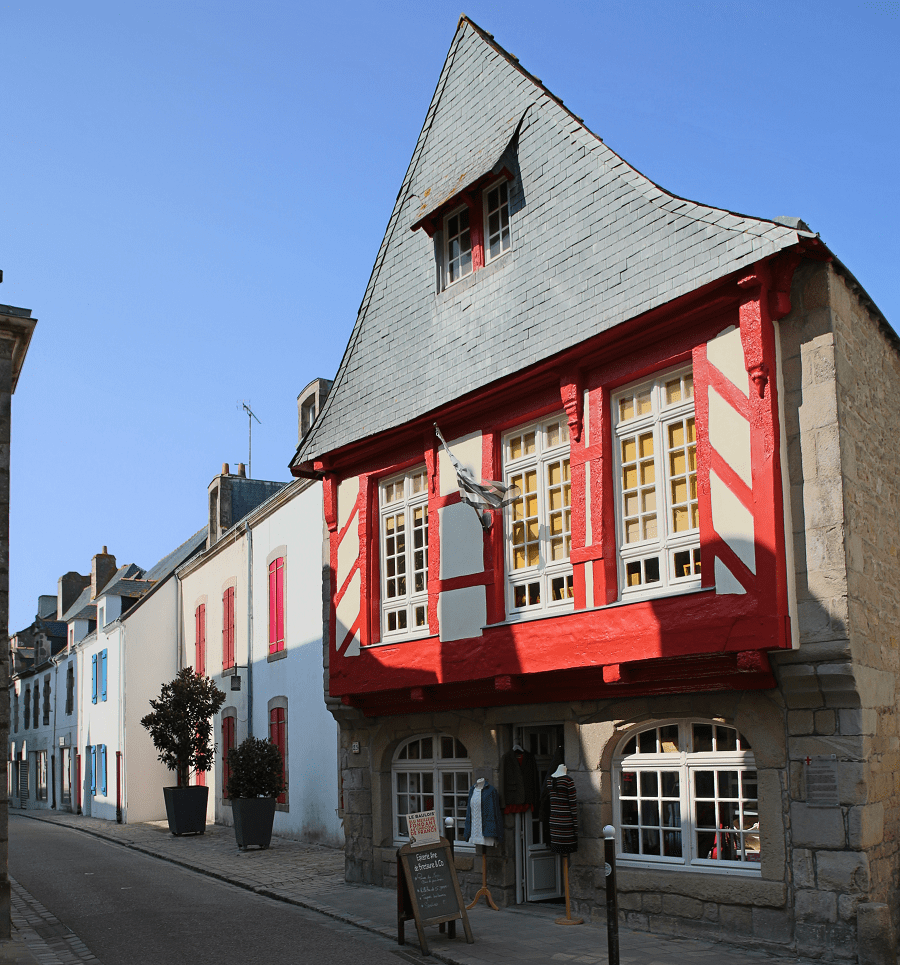 Thus, the Le Bouistre house, a historic monument since 1992 for its half-timbered facades and slate roofs, is, along with the Gabelouse and Portal houses, one of the oldest in the locality.

From the sixteenth century, the Guillaume André house combines freestone and half-timbered façades, as does the house at 33, rue Saint-Christophe; it dates from the end of the 1550s. The facade of a house on the Quai de la Grande-Chambre also justifies the inscription of the building, built in 1637. 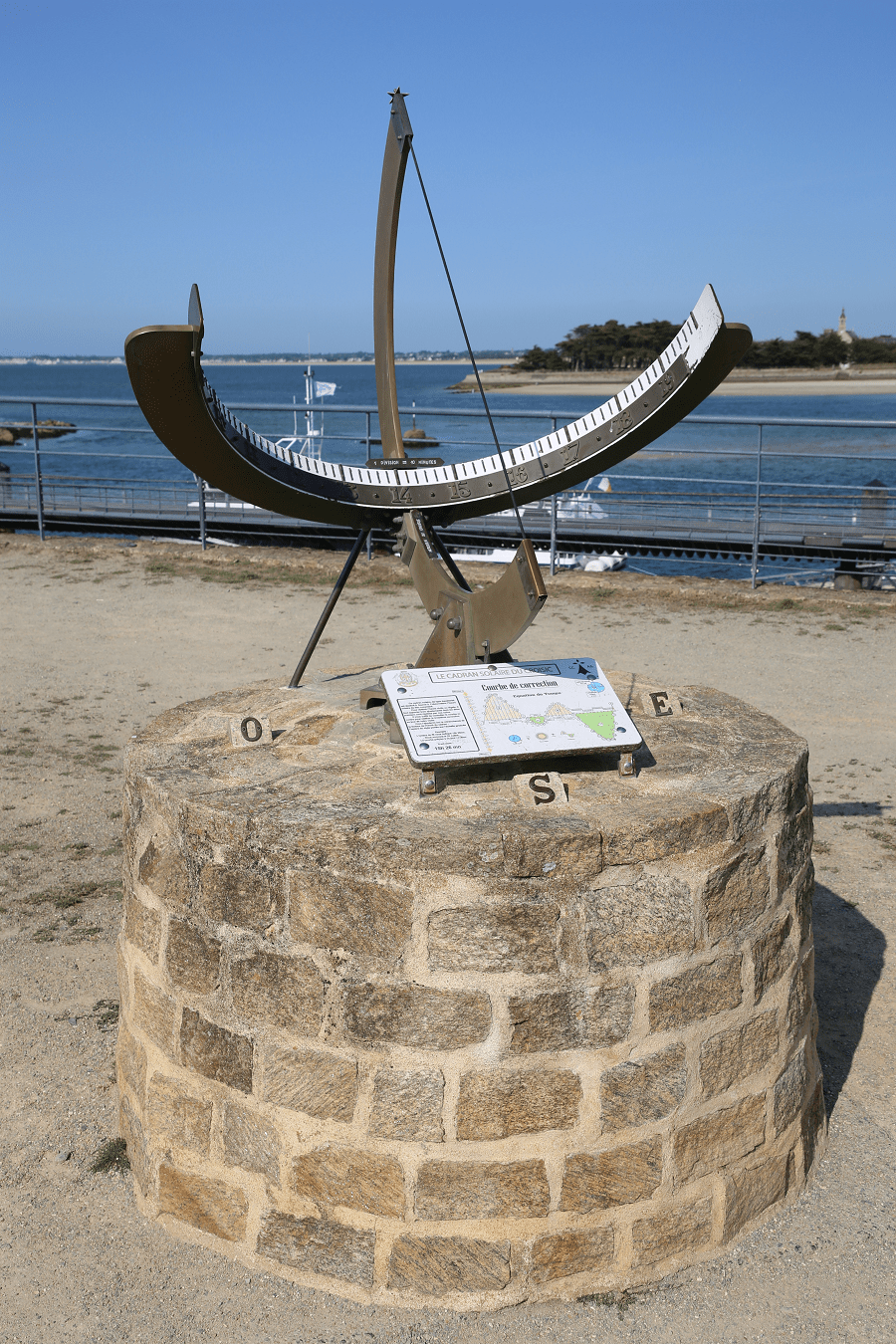 The survey carried out in 1997 by the Pays de la Loire regional council underlines the remarkable character of the architectural heritage of the nineteenth and twentieth centuries, at the time when the craze for balneotherapy appeared in Loire-Inférieure, favoured in Croisic by the arrival of the railway from 1879.

As health establishments and the local hotel offer cannot accommodate all visitors, mainly low-income families, real estate projects are then launched, the innovations of which are taken up by prestigious neighbouring resorts, La Baule-Escoublac, Pornichet and Le Pouliguen. Given the steep nature of the western part of the peninsula and the lack of an overall plan, real estate development did not have the magnitude of that of the resorts where land was more readily available. 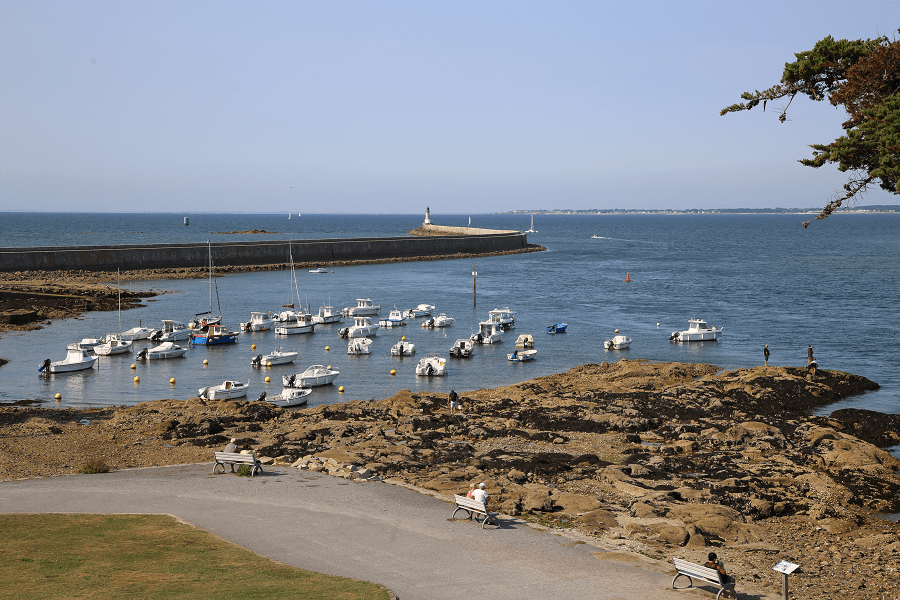 If local constructions are mainly the work of local craftsmen and project managers, real estate programs for the middle classes are emerging, as revealed by the Maréchal collection. The architect Clément Josso also provides a remarkable contribution through his project for a new district between the station and the bay of Port Lin, which, if abandoned for lack of funding, inspired the following generations. The sponsors of these projects are found among civil servants from neighbouring regions, from medium-sized towns. 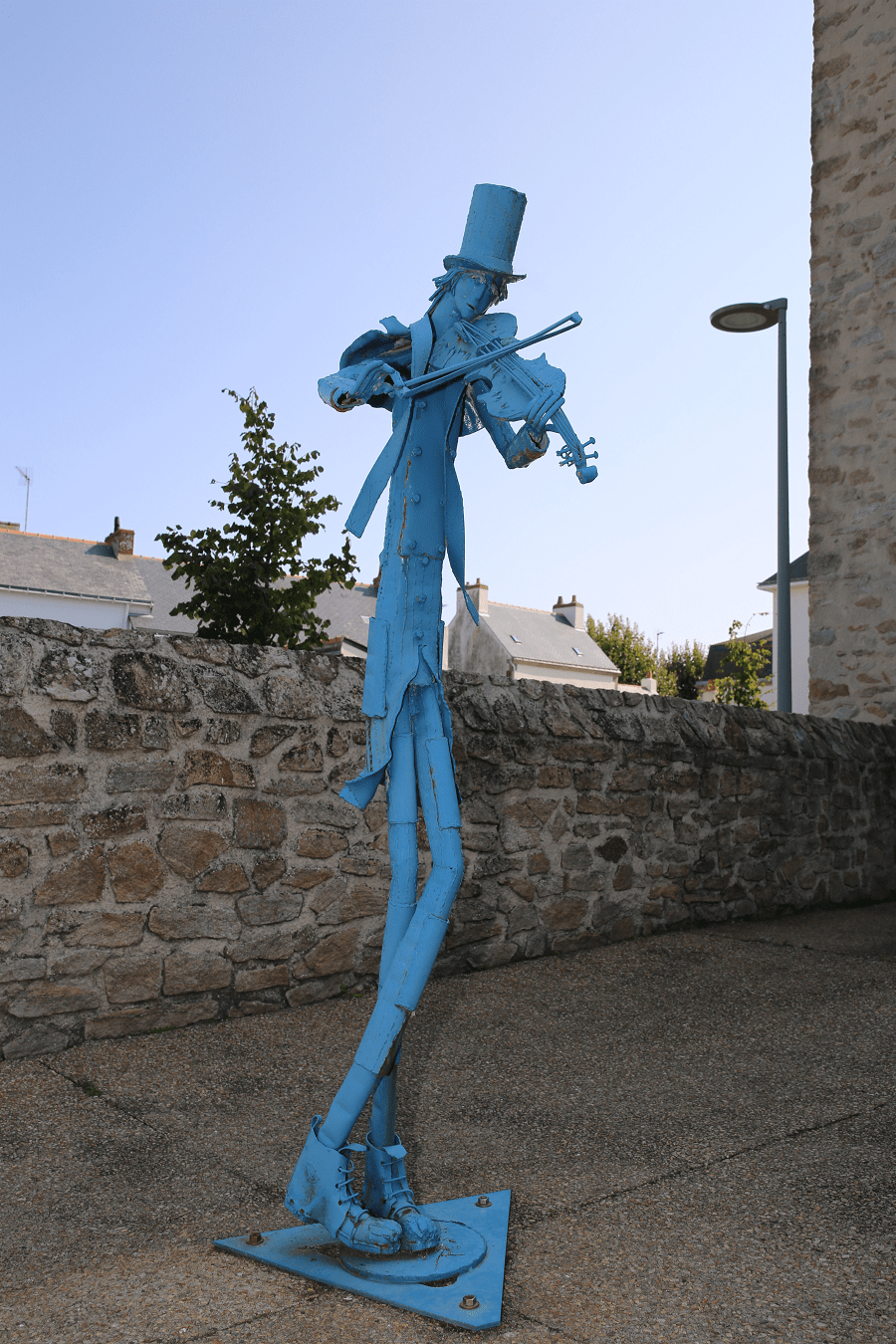 No less than 166 buildings were listed on the municipal territory by the 1997 survey on seaside resorts. This list includes, for example, the Hôtel de la Gare, built in 1881, the village hall from 1910 and the Hôtel des Bains, built between 1845 and 1847 by the instigator of the first bathing establishments, Silvain Deslandes-Orière.

The Longue Stone is a menhir dating from the Neolithic period, classified as a historical monument since 1889. Damaged during World War II, it was moved to its current location, on the seafront. 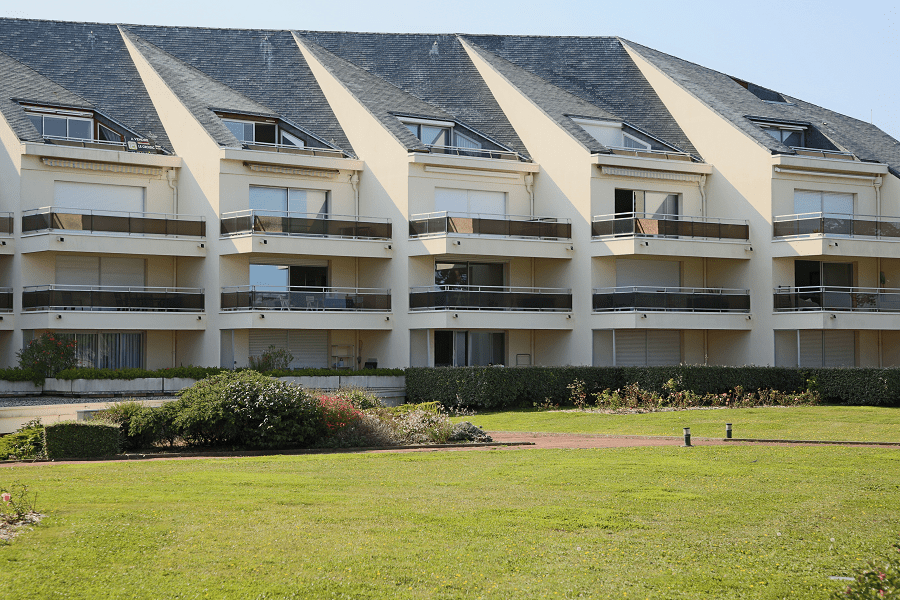 The manor house of Kervaudu is a building dating from the end of the fifteenth century. This domain seems to have belonged successively from the sixteenth century to several Protestant families. Sold as national property during the French Revolution before being transformed into a farm in the nineteenth century, it became the residence of Ferdinand du Puigaudeau, post-impressionist painter, in 1907 until his death in 1930. It is the first Breton manor to be classified as a historical monument in 1921.

The Hôtel d’Aiguillon is a former private mansion, built in 1670. It seems to have been temporarily occupied by Emmanuel-Armand de Vignerot du Plessis, Duke of Aiguillon. 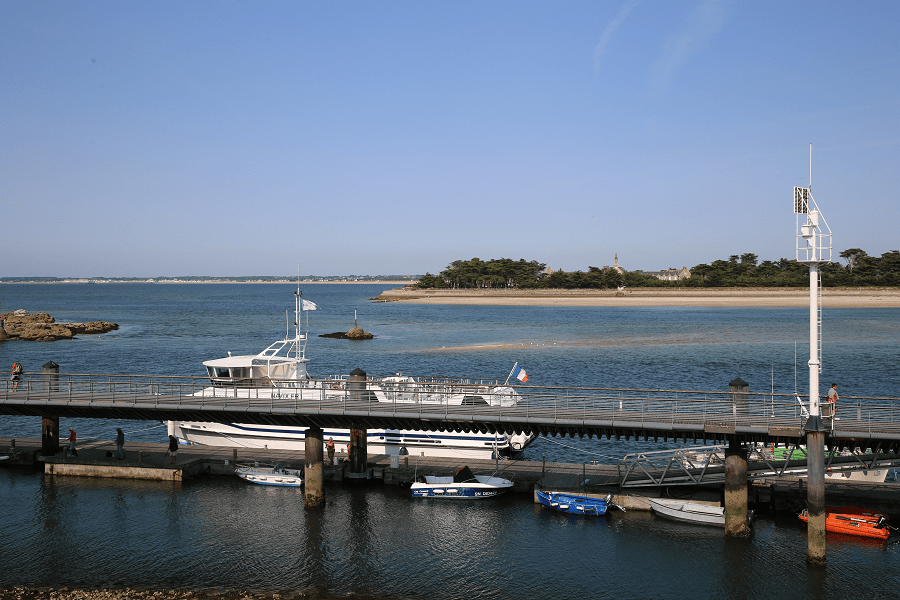 A glass roof of the chapel of Pen-Bron in La Turballe, titled How Our Lord Jesus Christ Heals a Paralyzed Child, represents the hotel. It hosted the town hall from 1908 to 2008.

The manor house of Pen Castel is the old Fort de la Barrière, named after the locality on the border with Batz-sur-Mer. The manor house was built in 1864, on the site of an old battery from 1747, disused in 1853. Henri Becquerel died there in 1908. Since 1959, the site has hosted a summer camp belonging to the federation of student associations and friends of the public schools of Eure-et-Loir. 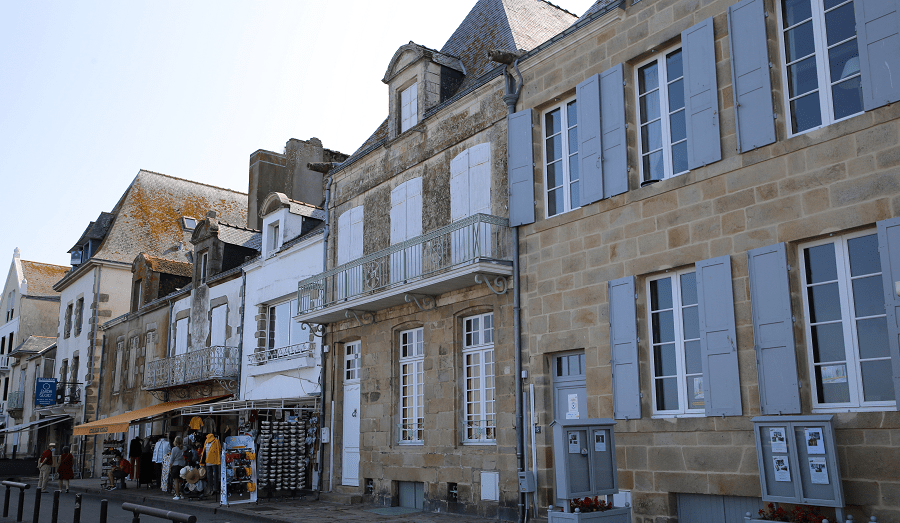 Another example of a rehabilitated military site, the Vigie de la Romaine was built on the foundations of a former guardhouse built in 1744, then destroyed in 1943 to allow the installation of a military radar. It was rebuilt in 1949 by André Chauvet.

The Fort de la Pointe, current hotel of the Fort de l ‘Ocean since 1997, is, for its part, a former guardhouse dating from 1861 and decommissioned in 1880. Originally, the fort was a square construction, surrounded by a moat with a drawbridge. It was subsequently restored in the neo-Gothic style under the name of Fort Hikéric. 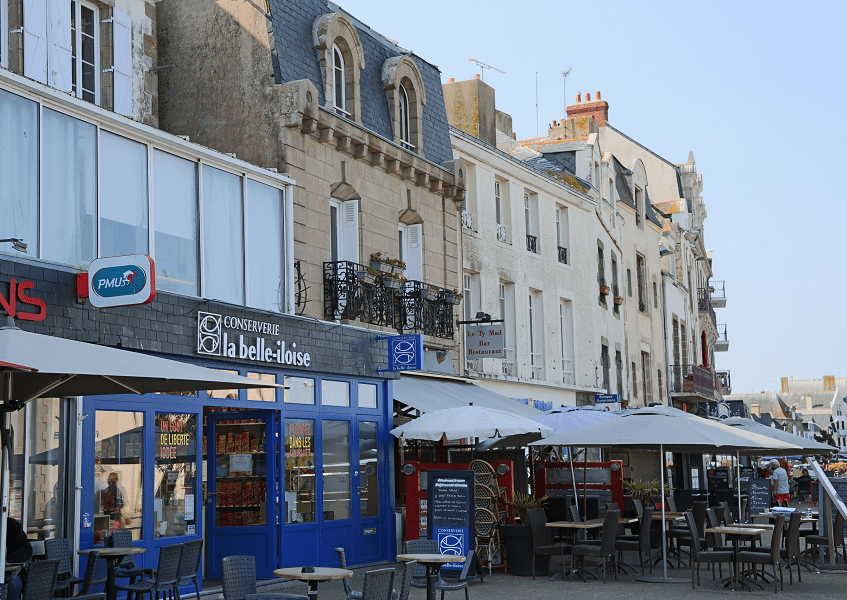 Many mills are attested or still visible in the locality. No less than 15 of them still existed in the nineteenth century. They supplied the flour necessary for the consumption of the population. For example, the mill of Providence in the enclosure of the park of Penn-Avel, restored in 2011. 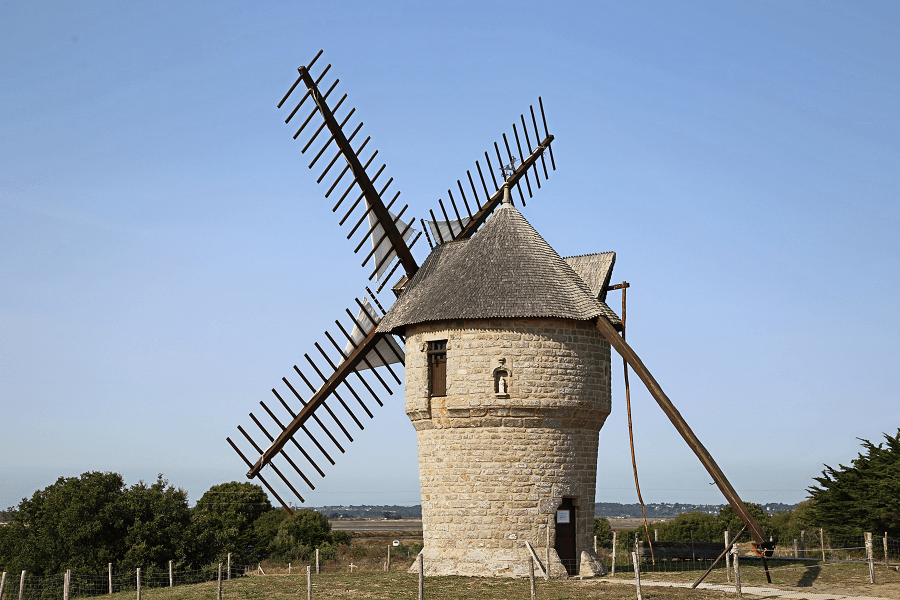 The Notre-Dame-de-Pitié church dates from the fifteenth and sixteenth centuries. Flamboyant Gothic style, it dominates the harbour from its seventeenth century lantern tower, 56 meters high.

The Chapel of the Crucifix dates from the same period—fifteenth and sixteenth centuries. It is located at the entrance to the town. Flamboyant ogival style, in granite and with a single nave, it is contemporary with the appearance of Protestantism at Croisic. 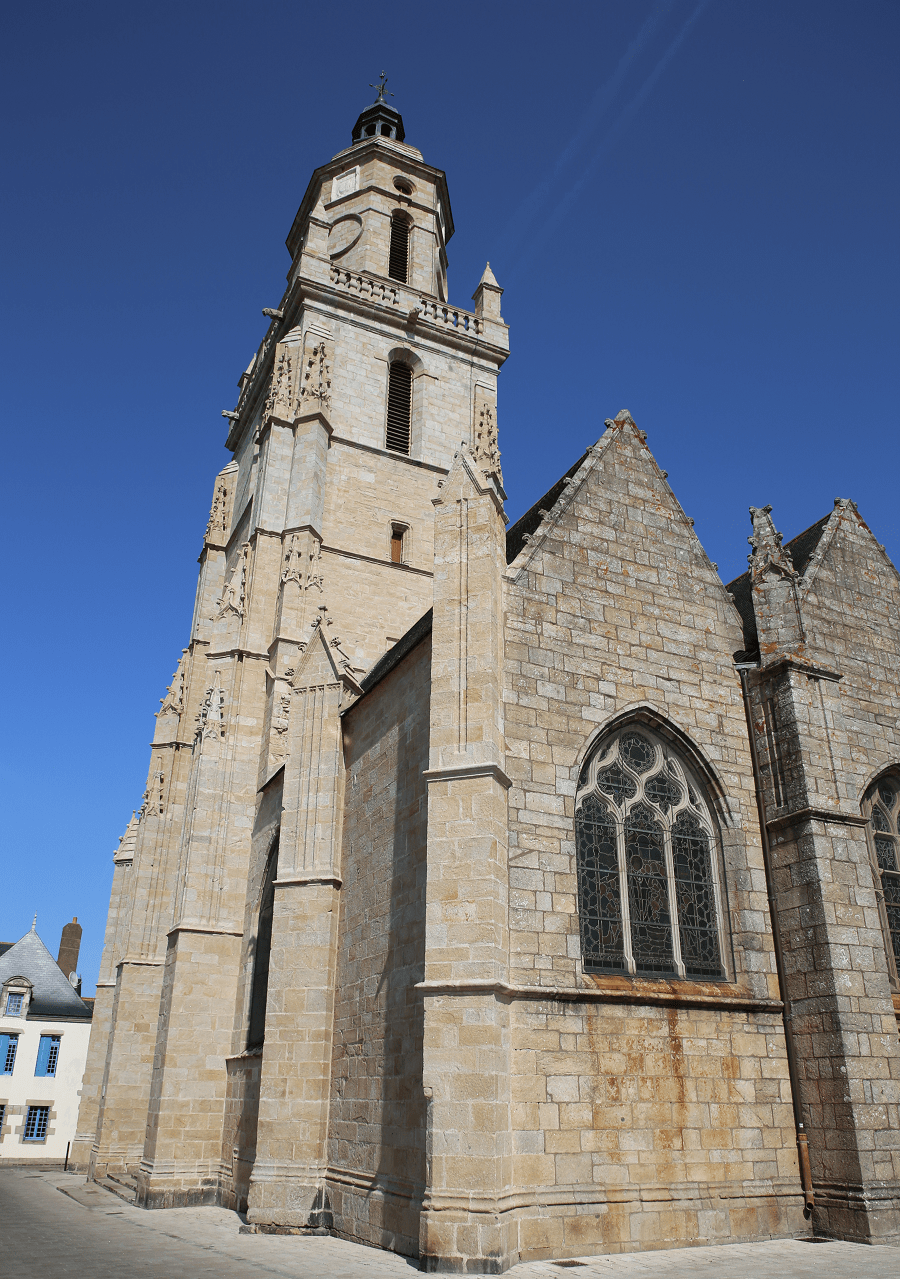 The Océarium du Croisic, located near the port of Croisic 400 meters from the sea, is one of the largest private aquariums in France. In an area of 1,700 m2, it exhibits more than 4,000 animals which are distributed among the 56 aquariums. Each year, it welcomes more than 250,000 visitors per year, making it the eleventh aquarium in France in terms of visits. It is also the third visit site in Loire-Atlantique.

For more than forty years, the Carnival of Le Croisic has taken place at the end of April, famous for the parade of floats and carnival riders and by the Auto-da-fé of Father Mathurin, a gigantic straw mannequin. May has seen, since 2009, the organization by the Arts et Balises association of the Tempo classical piano festival during four days from Ascension Thursday. 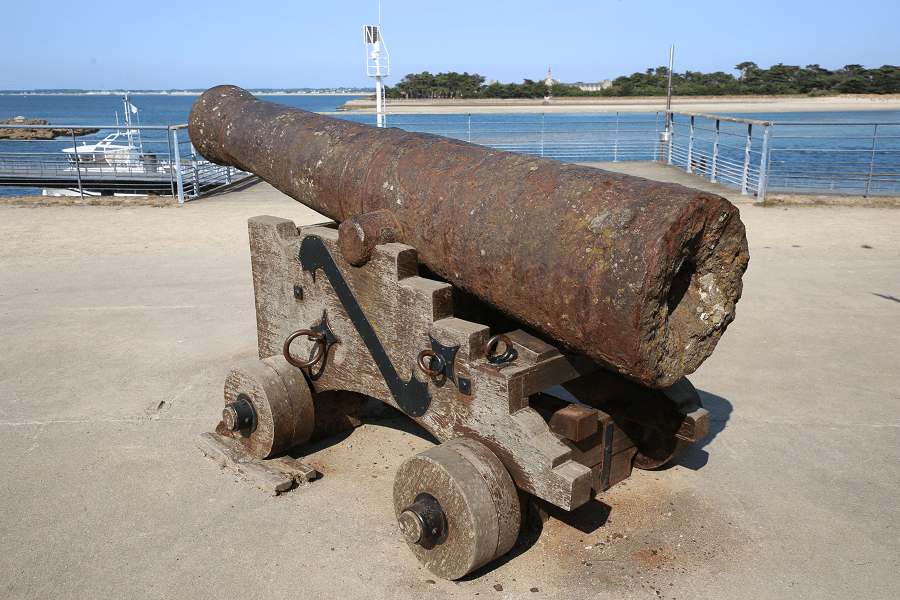 During the summer, every Monday evening of July and August, the quays of the port welcome street artists, in parallel with a night market. August is marked by a sea festival, which is a local celebration more than a century old (1893) and held in memory of the protection Virgin Mary gave to fishermen.

September is placed under the sign of literature, since it hosts the book fair Plumes d’Équinoxe, presenting in particular regional authors.

Finally, since 2006, the Film festival De la page has been organized in October. 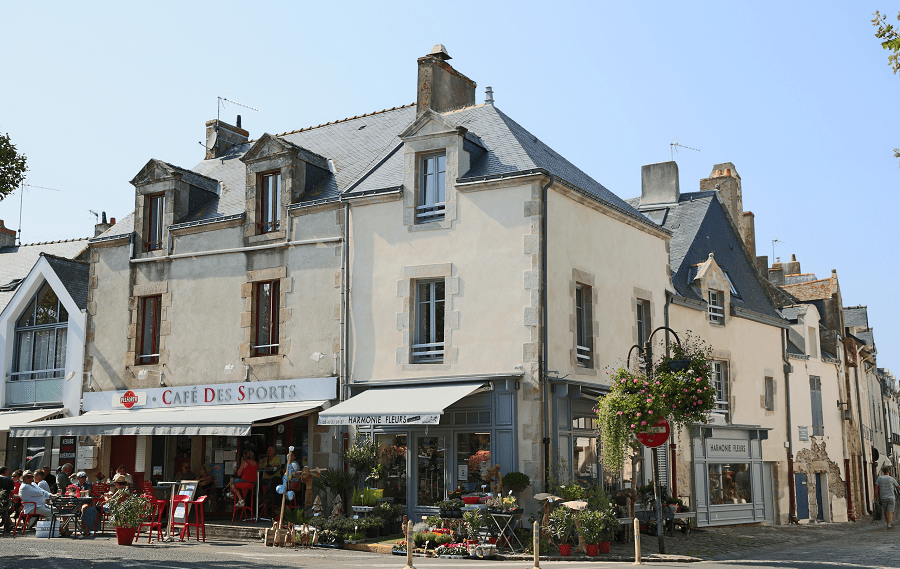 Port-Lin Beach in Le Croisic is the main beach of the resort. Located on the road to the Wild Coast, on the south coast of the peninsula, it is named as the best beach in Le Croisic. Surrounded by stunning villages, the sandy beach runs over 100 meters. Rocky interventions on both ends hide some small coves. 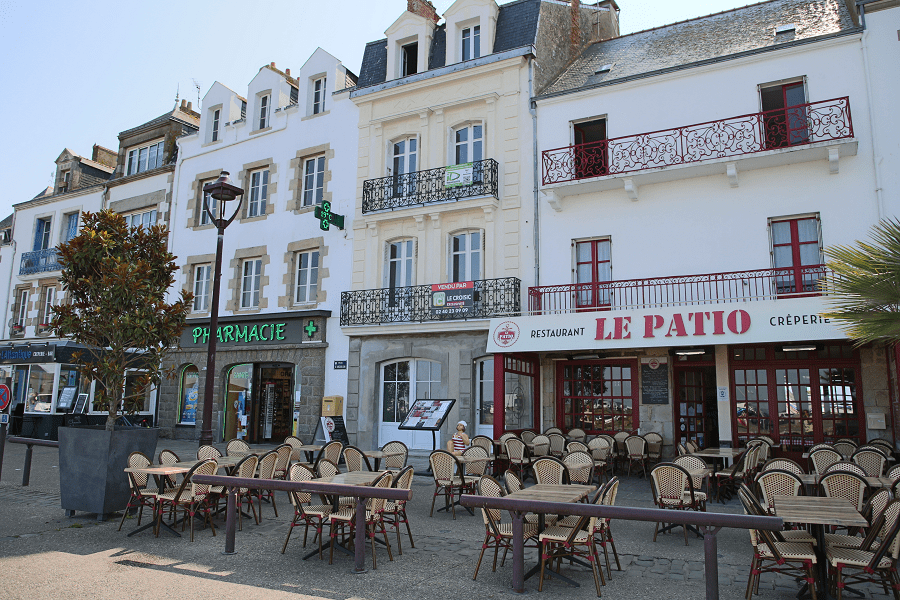 There are five Michelin list restaurants in the city: 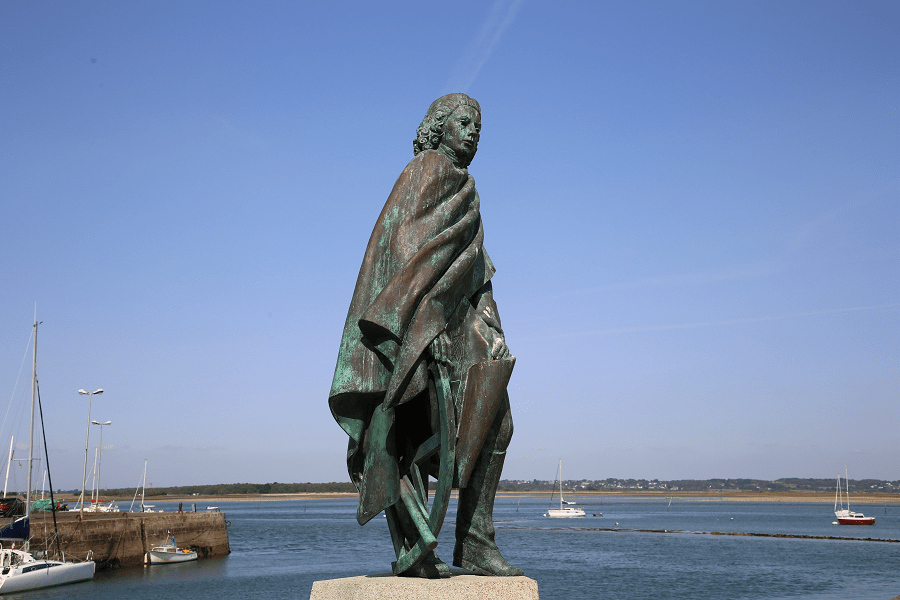 The town has its own SNCF station, terminus of the line from Saint-Nazaire, an extension of the line from Tours; it is currently served by the TER Pays de la Loire, the TER Interloire and the TGV from Paris-Montparnasse in particular. 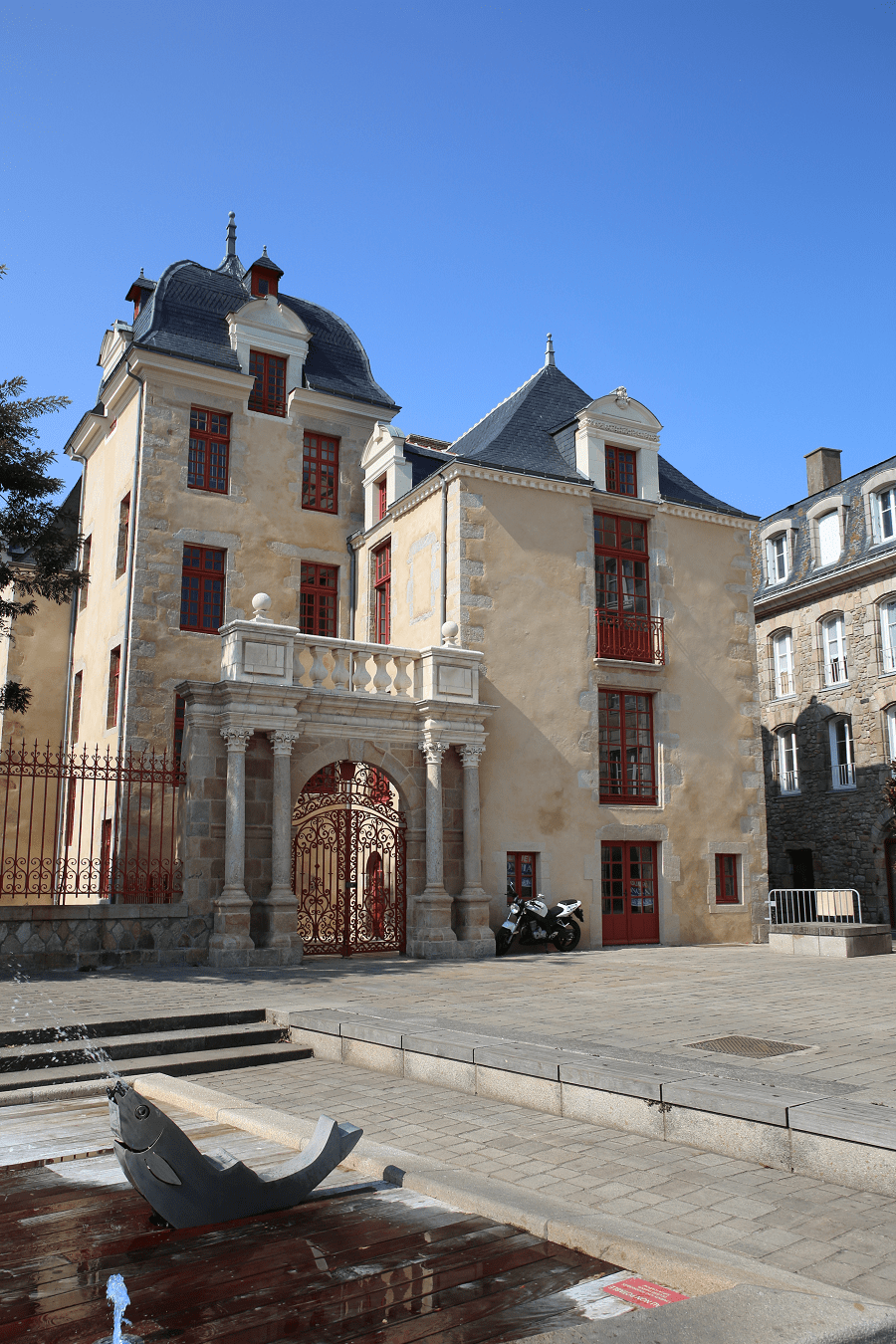