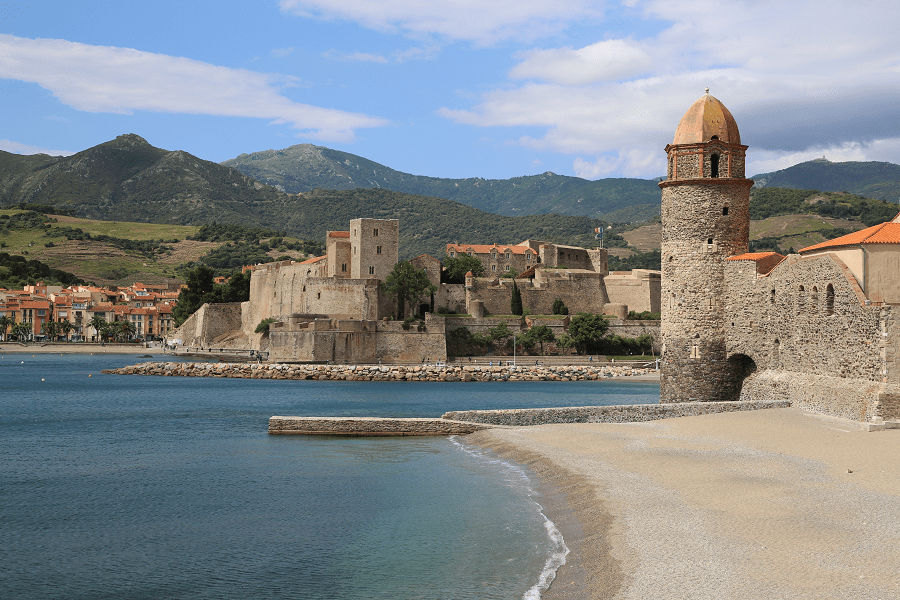 Collioure (in Catalan: Cotlliure) is a town, head of the commune of the same name, of about 3000 inhabitants, of the region of Roussillon, in the Northern Catalonia.

Nowadays, along with the towns of Argelès-sur-Mer, Port-Vendres, Banyuls de la Marenda, Cervera de la Marenda, Palau del Vidre and Sant Andreu de Sureda, it is part of the canton number 5 of the Vermillion Coast (new grouping of municipalities resulting from the cantonal restructuring carried out on the occasion of the cantonal and departmental elections of 2019), with a capital in Argelers. 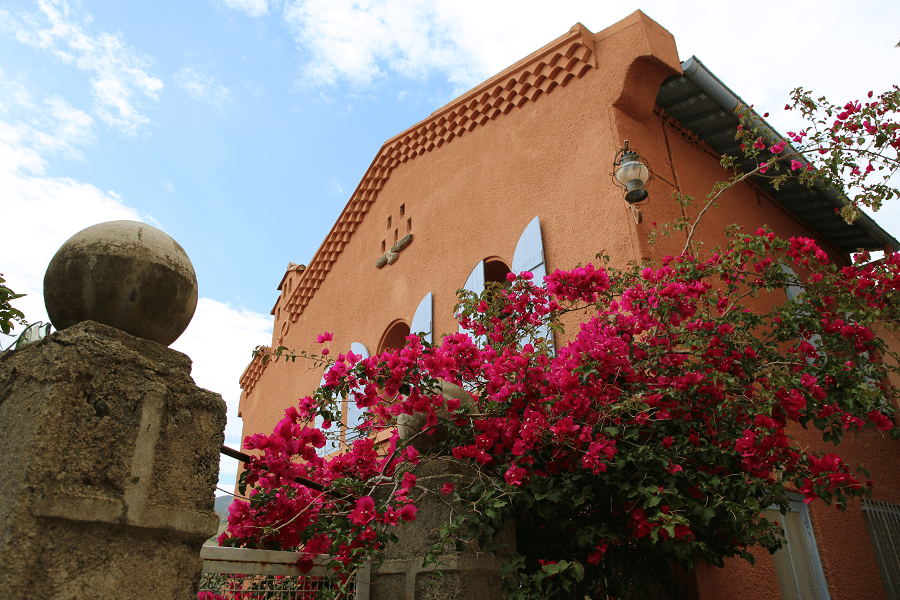 Former fishing and wine-growing village, known for its anchovies, Collioure has also been an inspiration for painters such as Matisse, Derain, Chagall, Gris, Braque, Picasso, Dufy and Dalí, among others, who portrayed its castle, its alleyways or the picturesque bell tower of its church by the sea. 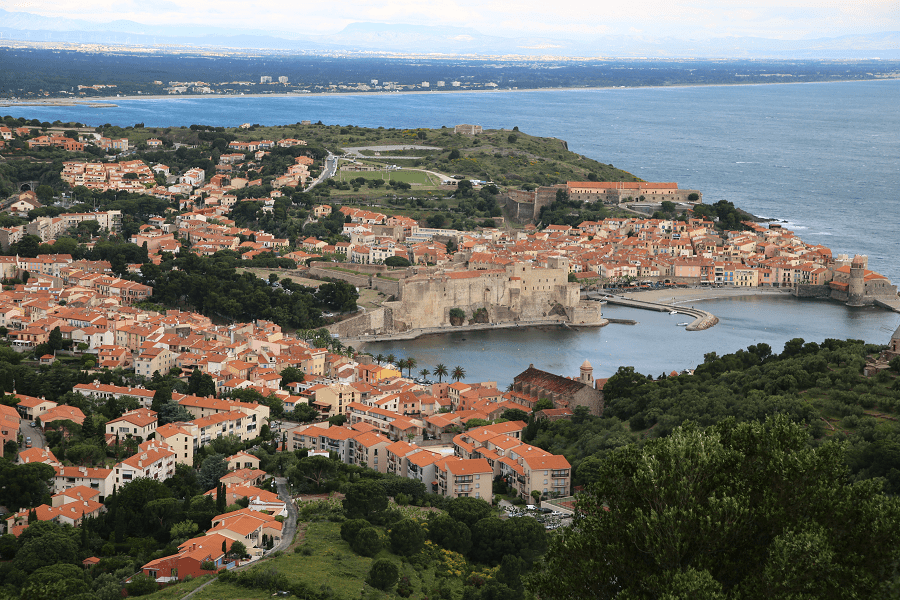 On the cemetery of Collioure there are the tombs of Antonio Machado and the novelist Patrick O’Brian, who lived there between 1949 and 2000.

The nickname of the people of Collioure is ganxeros or conyics. The saying goes: “It is good to live in Collioure, and in Argelers, if you have money.” 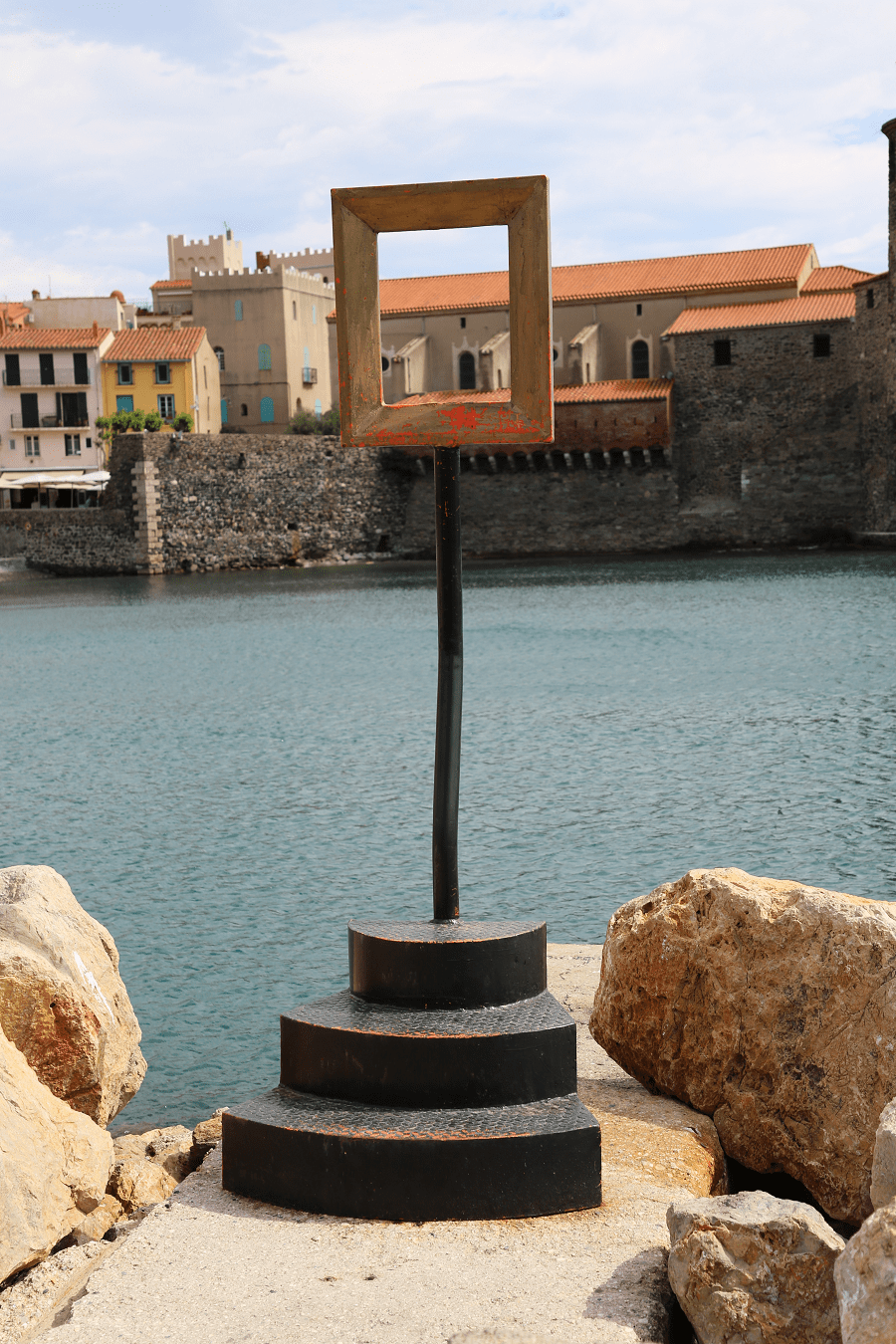 The primitive Old Town of Collioure disappeared with the extension of the fortifications of the Royal Castle carried out by Vauban. From then on the former fishermen’s neighborhood located between the left bank of Duí and the church of Santa Maria dels Àngels de Collioure, also built by Vauban, became known as the old village. It had been walled, and it conserves three old portals, two of them facing the sea and a third facing the mountains, which in modern times found itself within the urban center, as well as the wall tower which was converted into a bell tower of the parochial church. This is what is called Port or Platja d’Amunt. 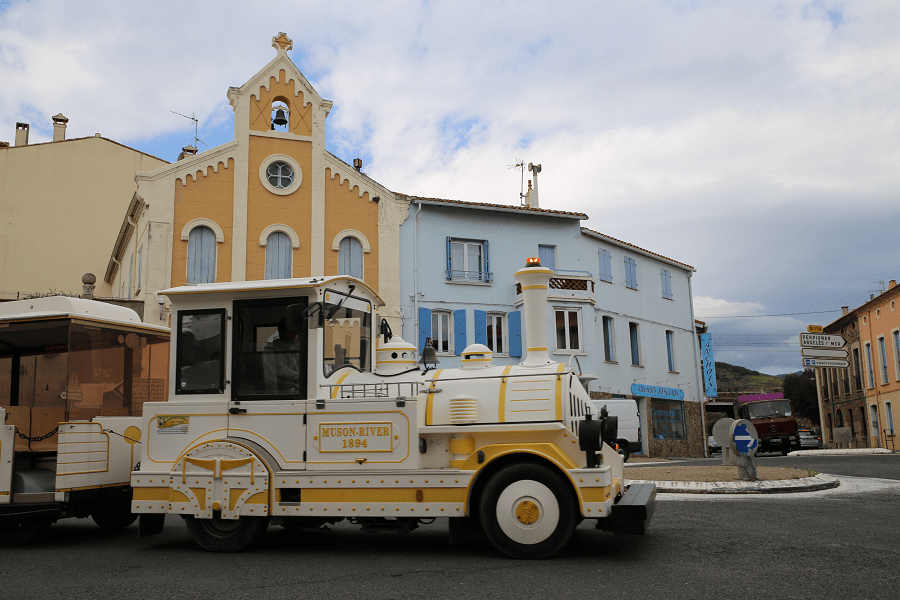 The town of Collioure retains ancient parts, such as Plaza de la Meria and arcaded street of Sant Vicenç. At the northeast end of the current old town, on the old island of Saint-Vincent, the baroque chapel of Saint-Vincent of Collioure is located. Inside the old town there is the chapel of Our Lady of Good Luck, erected on a balcony above a portal of the old curtain wall, located at the top of the street of Saint-Vincent. In the northern part of the old town, the neighborhood of Morer was formed, which used to have the church of Saint Sebastian of Morer, or Punta. 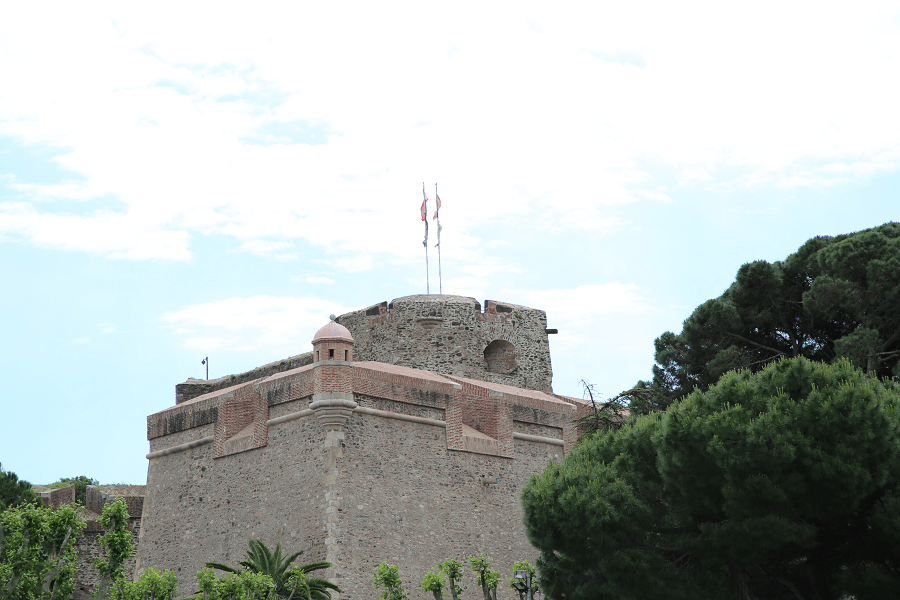 In the central area of the village, close to the west side of the Royal Castle, there is the old Cemetery, with the old tombs, including those of Antonio Machado and his mother and that of Patrick O’Brian. The town’s growth has caused the old cemetery to be insufficient, and the New Cemetery has been built further west, by the new road D-914, in the Creueta zone. In the highest part of this area of the town there is the important Protestant temple of the Lutheran and Reformed Church, one of the most important in Roussillon and renowned for its architecture. 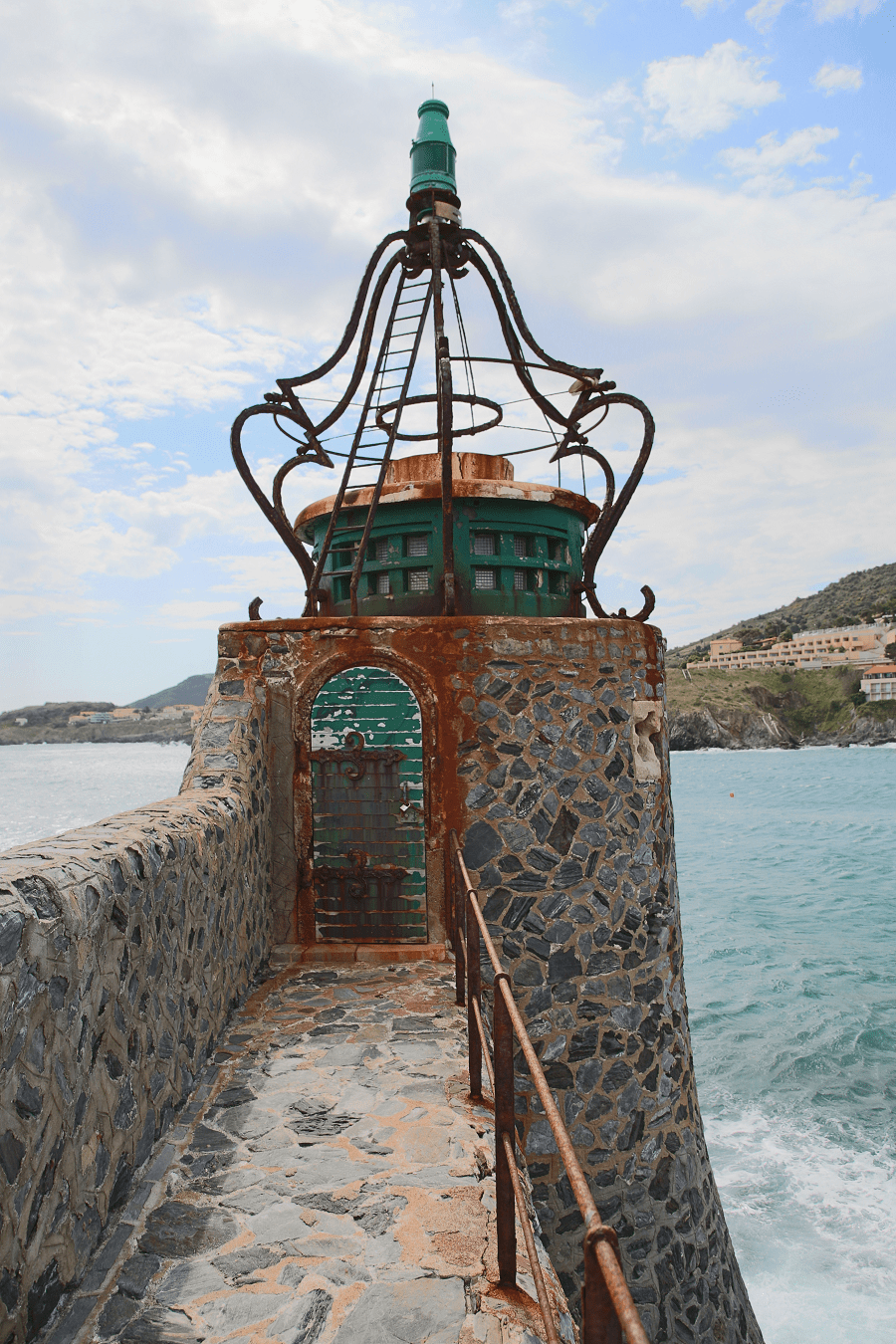 The town of Collioure extends in the form of a semicircle around its harbor. The, just described, old town shapes its north-west arm while the Raval shapes the other half, the southern and south-east one. Between the two rises the Royal Castle of Collioure. The Raval, formerly outside of the city walls, forms the Port or Platja d’Avall, and is dominated by a medieval tower that served as a lighthouse and as customs. At its feet, extends the wide beach of Collioure. 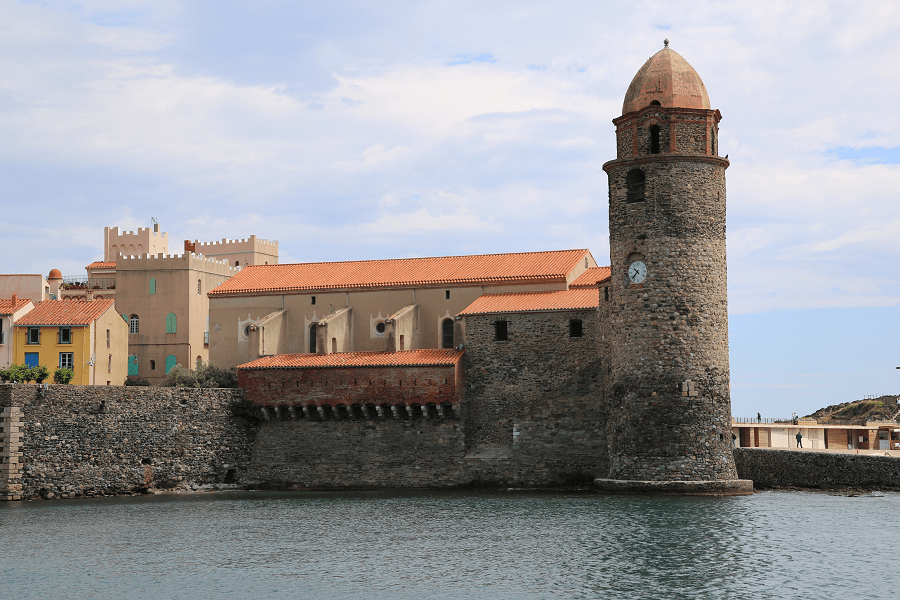 The streets layout of Raval is clearly medieval. At its east end is the old convent of Santo Domingo, erected in 1290, it had a live-in community until 1791. It is a beautiful building mainly from the 13th and 14th centuries; which currently houses the Museum of the Dominicans. Around it grew the neighborhood known as the Dominicans and by the sea the neighborhood of Voramar, from which the promenade located there takes its name. Other neighborhoods that existed since the first expansion of the town are those of Botiguer, Crist, Janota and the previously mentioned Morer. 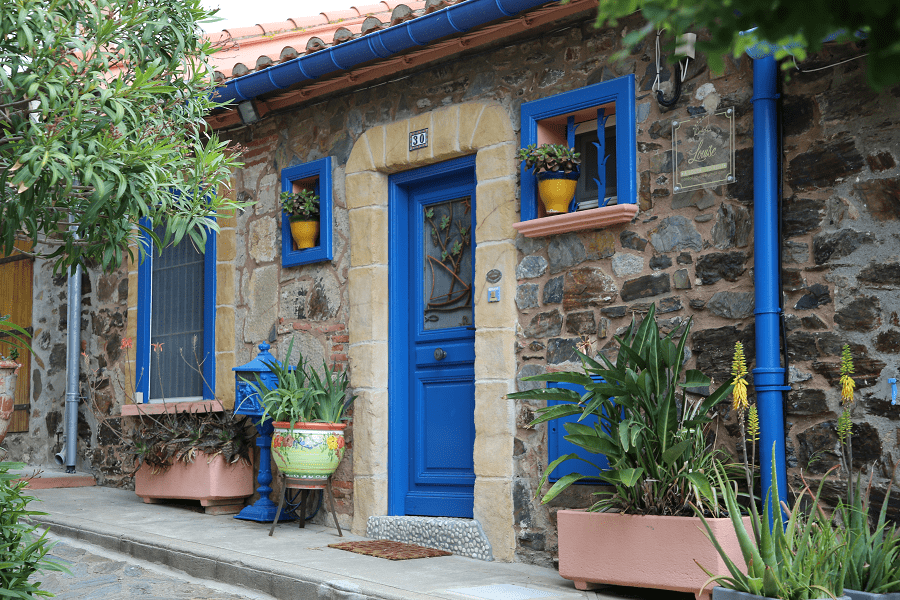 In modern times, Collioure has extended, especially up to the southwest, the only direction in which it can grow, with modern developments such as Balcón, La Valeta, Petit Consolació and the Residencia d’Ambella. Within these growth zones, on the north-east end of the district, on the west side of the Ansa of Reguers, a modern seaside rehabilitation center has been built (officially, CLINEA Centre de rééducation fonctionnelle Mer Air Soleil). 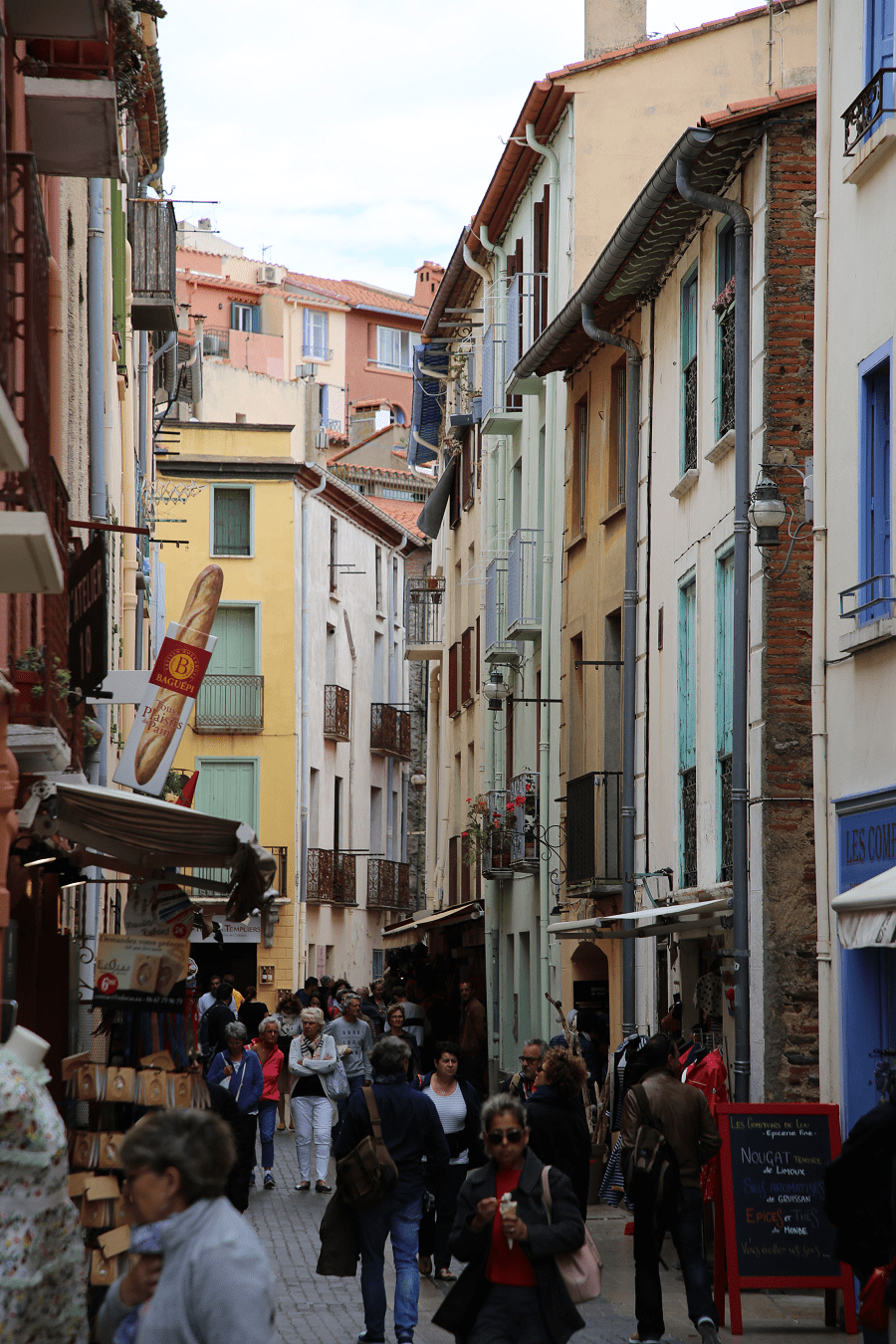 La Valette-du-Var is one of the sections that form the present urban centre of the town of Collioure. It is on the south-east part of the town, on the foot and over the road that follows the coastline in the direction of Portvenders. It is formed by a cloister of villas, usually with gardens, which form quite dispersed and not very coherent centre. It is inland, south-east of Ansa de la Valeta. 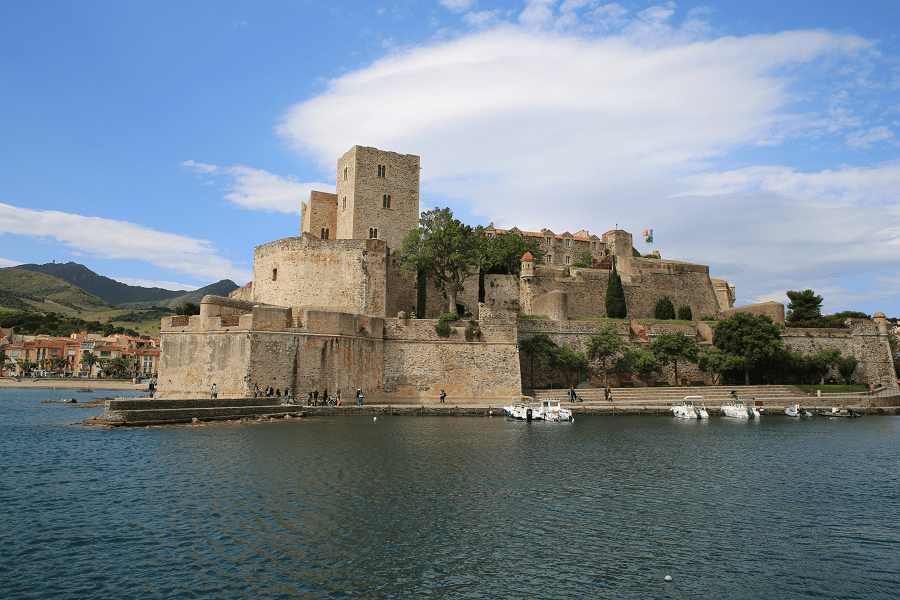 El Rimbau is an old rural neighborhood that is located on the western boundary of the municipality, on the right bank of Ravener stream and on the border with the municipality of Argelès-sur-Mer. Nearby is the Alarb Cave, which is very well preserved. 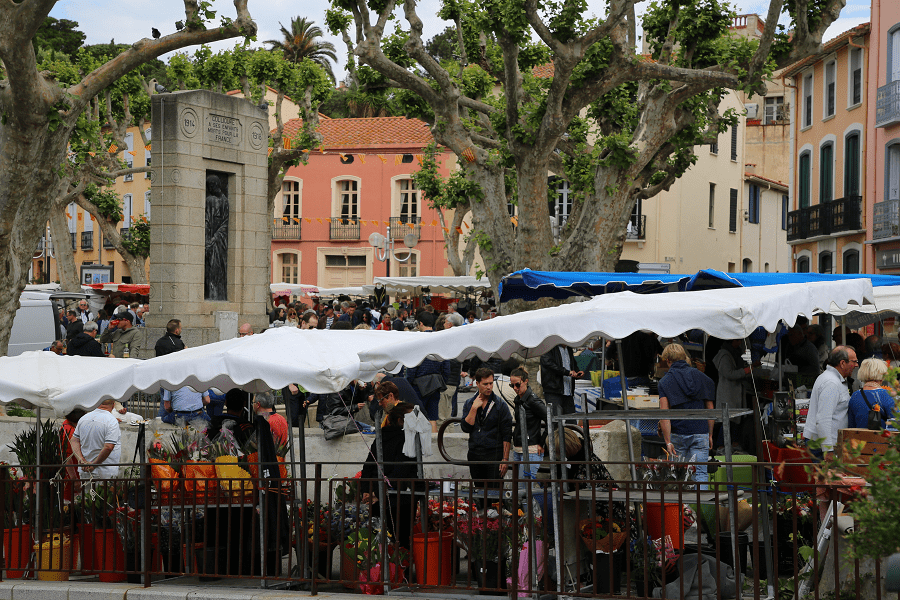 The chapel of Saint Vicent

The chapel of Saint Vincent of Collioure, from the 18th century, is situated at the foot of the sea, to the northeast of Notre-Dame-des-Anges.

The military fortifications of Collioure

The strategic location of Collioure created a landscape full of military fortifications of very different eras, from the Romans, such as the foundations of the Madeloc tower, to artillery batteries of the 20th century wars, like the batteries near the northeast end of the commune, almost bordering with Port Vendres. The most important ones are detailed below. 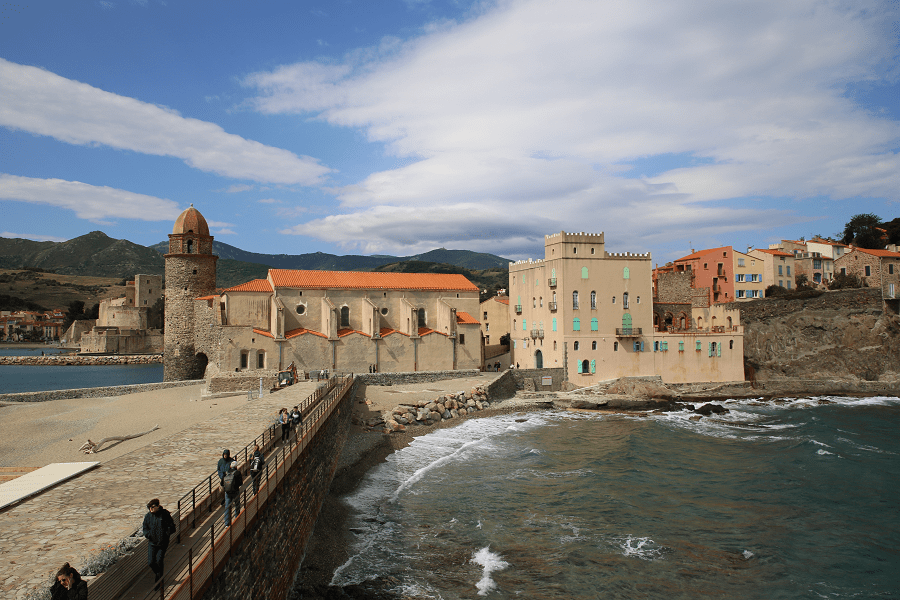 Disappeared castle, located near the Royal Castle of Collioure, which was donated in 1190 by Berenguer d’Orla to the Order of the Temple and was the center of the Templar command, after 1312 it belonged to the knights of Hospitaller, of Collioure, or Orla. Its dependencies included: Bompas, Orla, near Perpinyà, and Cosprons. The chapel of Santa Maria del Castell dels Templers is its only element that has endured. 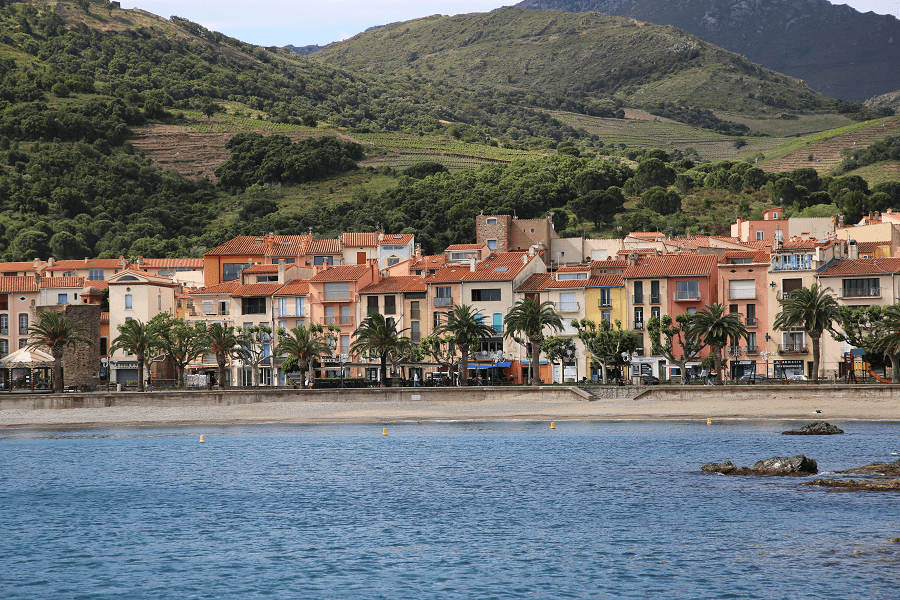 The Fort Mirador is located up on the northwest of the current old town of Collioure. It is another one of the fortifications built in the Modern Age as the northern defense of the town and castle of Collioure. It was built replacing the Fort of Santa Teresa, which previously had replaced the medieval tower of Puig Musart. 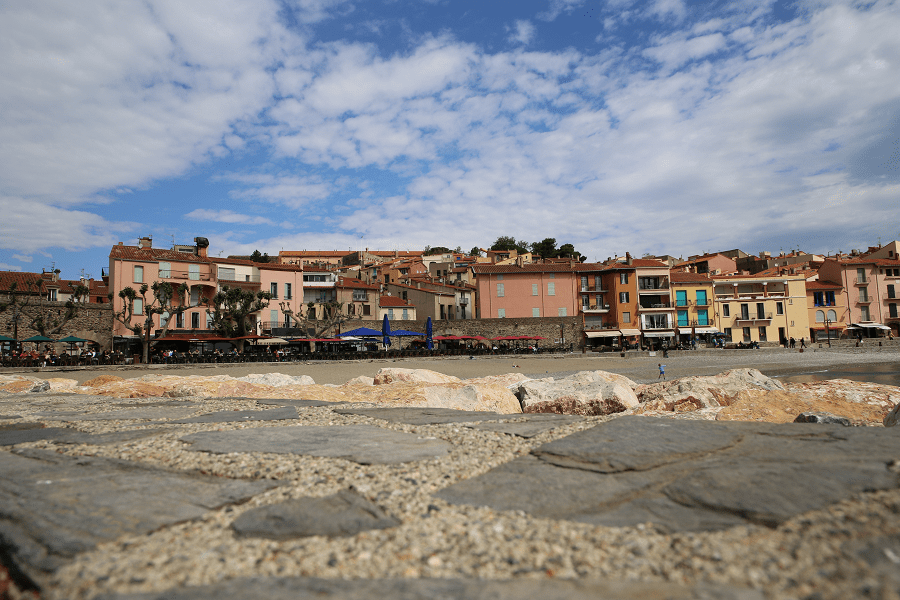 The fortifications of Carrat and Rodon, or Estrella tower, are two elements of the same bastion located to the northwest of the town of Collioure, close to the Fort Mirador, north-west of it. It is part of the set of fortifications built in modern times in order to defend the town of Collioure, its Royal Castle and its port. It is part of the defensive system of the Fort Mirador. 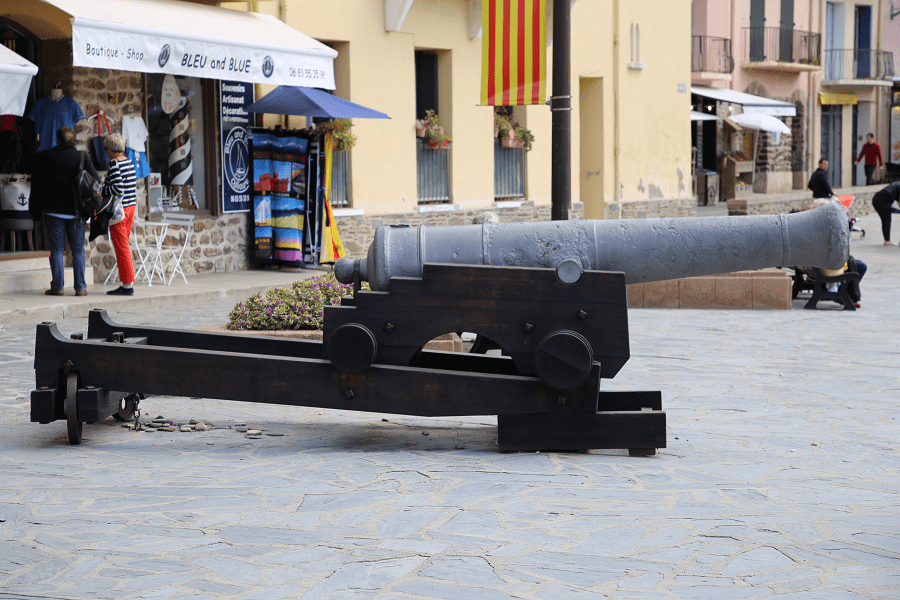 Dominating the village of Collioure, raised to the south of the town, on the top of a hill, is a Fort or Castle of Saint Elm. In the center of this fort there is the Watchtower, medieval, round tower, in the same style as the towers of Madeloc or La Maçana, the fort was built around it, in the second half of the 16th century, in the days of Philip II of Spain. 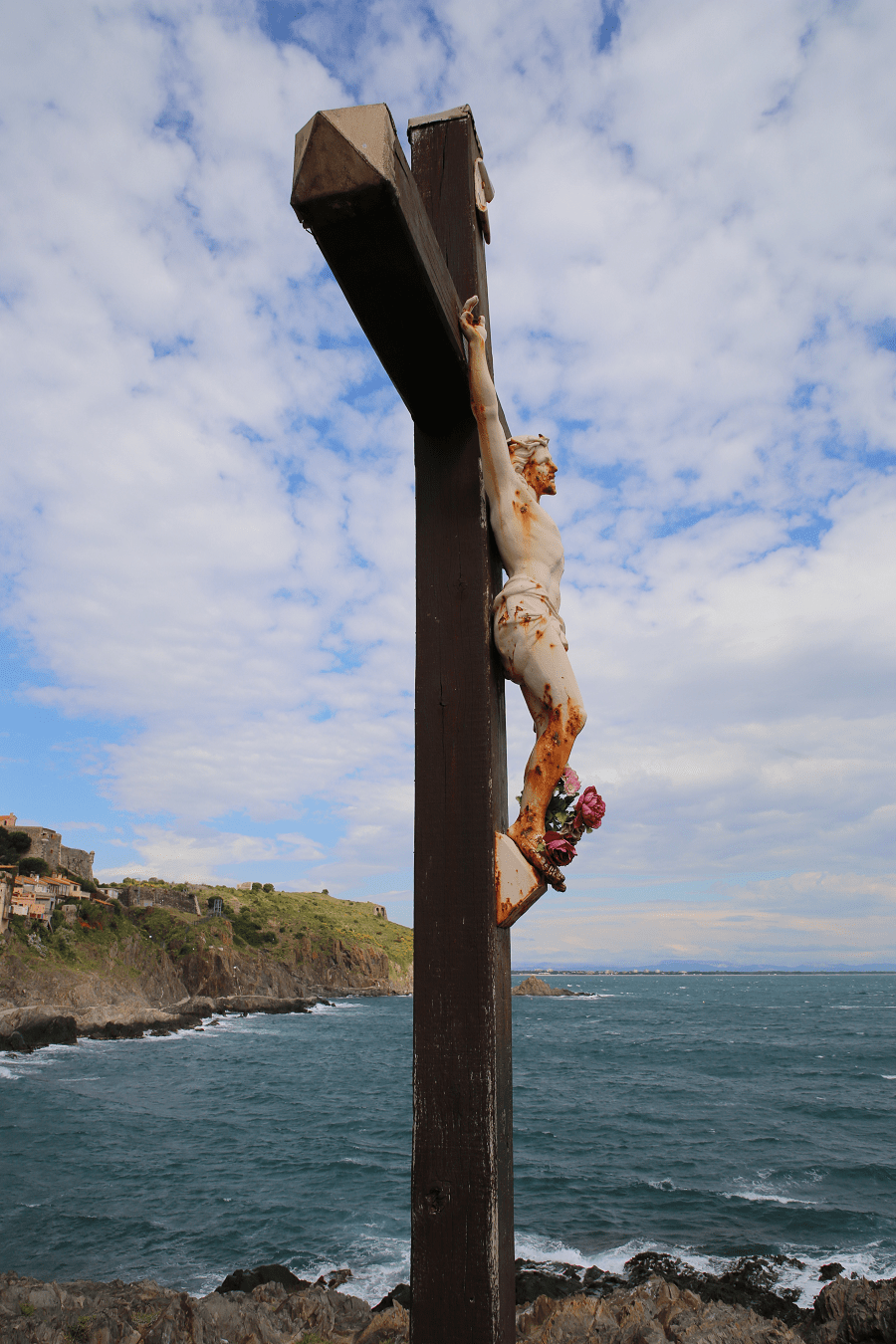 Fort Dugommier is located on a hill near the southwest of the Fort of Saint Elmo. Much smaller, it is currently in ruins. It was built between 1848 and 1851. 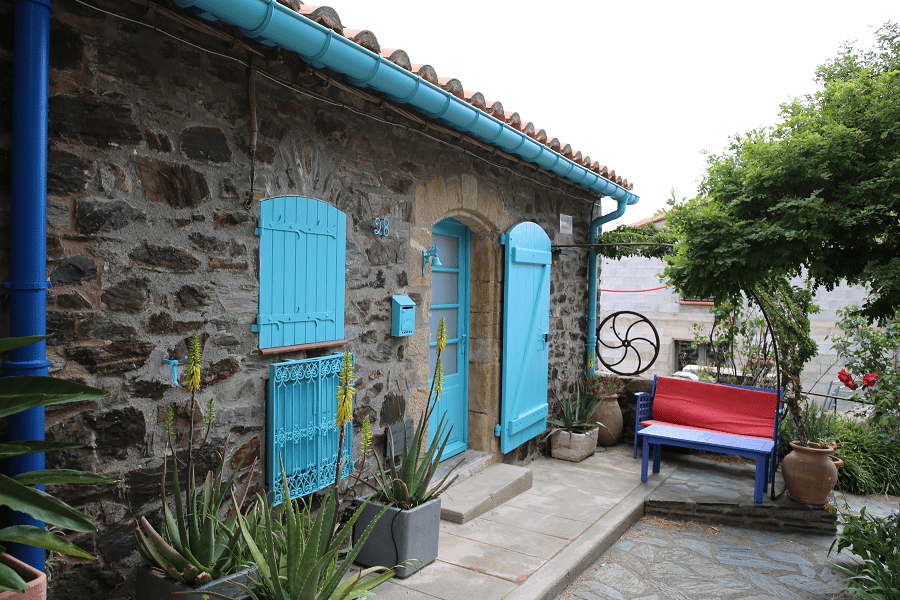 The old lighthouse of Collioure is an old tower that used to be part of the defense walls of the town. With the construction of the new parochial church of Santa Maria dels Àngels, replacing the old parochial church demolished in the 17th century, it became a bell tower of the parochial temple, without loosing, at first, its defense function. It is located at the far east of Port d’Amunt, at the south-east corner of the church.

Near the northwest of Villa Navarro, in the equally northwestern part of the periphery of Collioure, is the Torreta, a round tower of medieval origin. 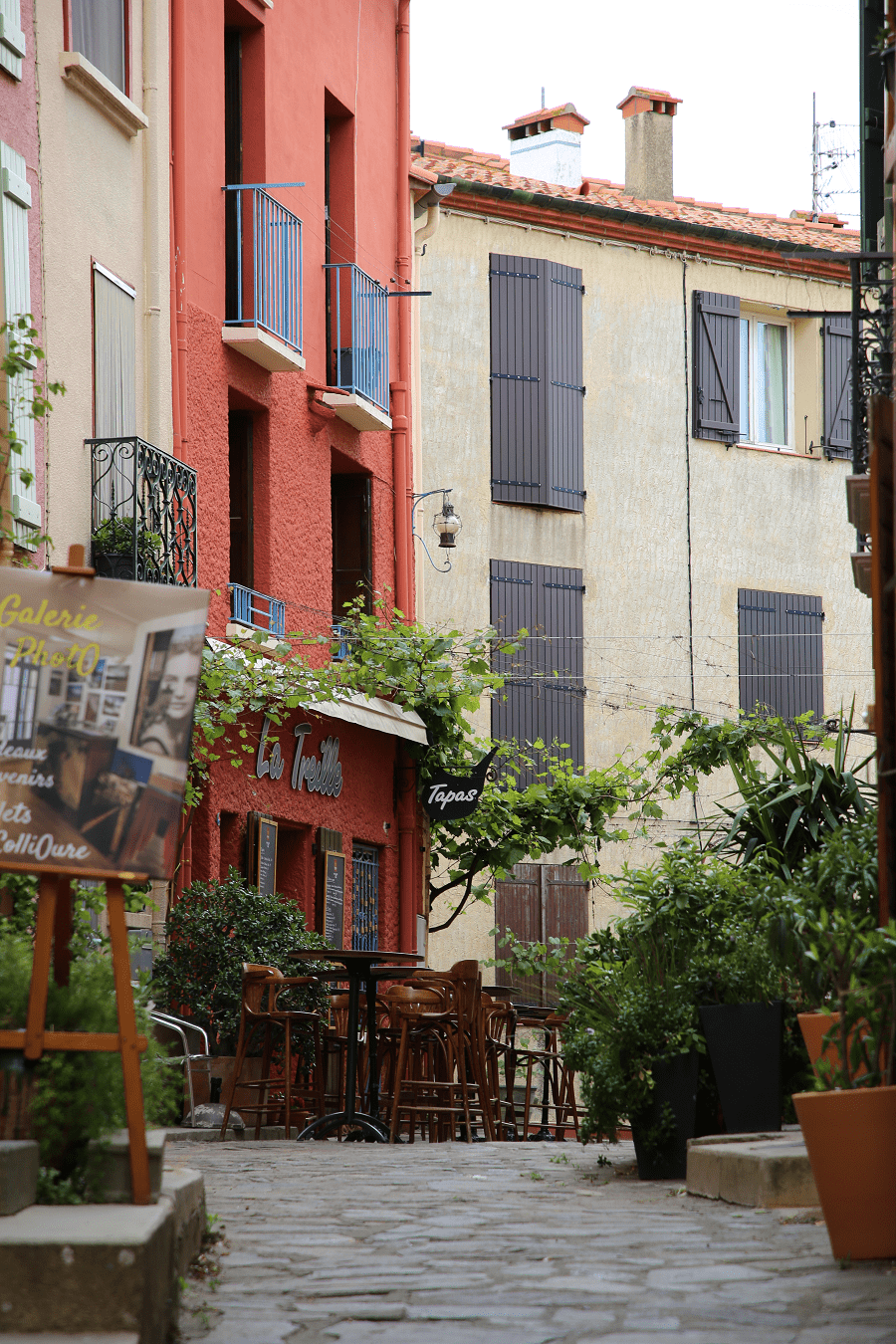 The coast and main beaches

The coast of the municipality of Collioure is very broken and articulated, like the whole Côte Vermeille. It begins in the north, in the eastern half of Platja de l’Olla (western half belongs to Argelers), at the mouth of Ravener stream. Heading south-east you will find the massif where the Fort Carrat and Fort Rodon are located, in addition, on the south-east end there is the Fort of Mirador, the latter already above the town of Collioure. Then, continuing to the southeast, you will find the Saint Vincent Beach and the port of Collioure, dominated by the town and the Royal Castle. 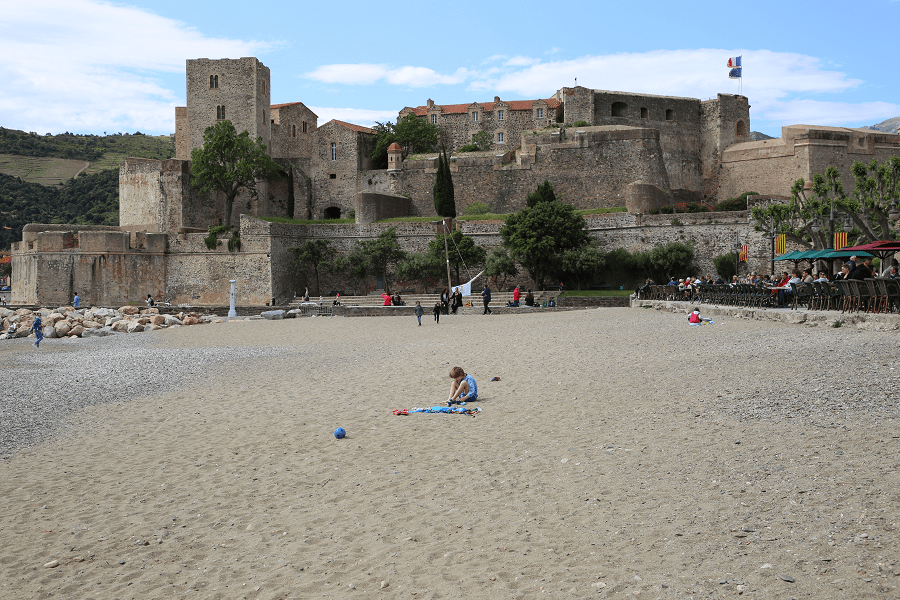 The coast follows north-east, through the Ansa de la Valeta, and forms another small head, before returning southeast forming the Ansa dels Reguers, which is closed to the northeast by Punta dels Reguers, with the old artillery batteries. Then, again to the southeast opens the Oli Beach, which borders with Port-Vendres: a little less than half of it belongs to Collioure and the rest to Port-Vendres. 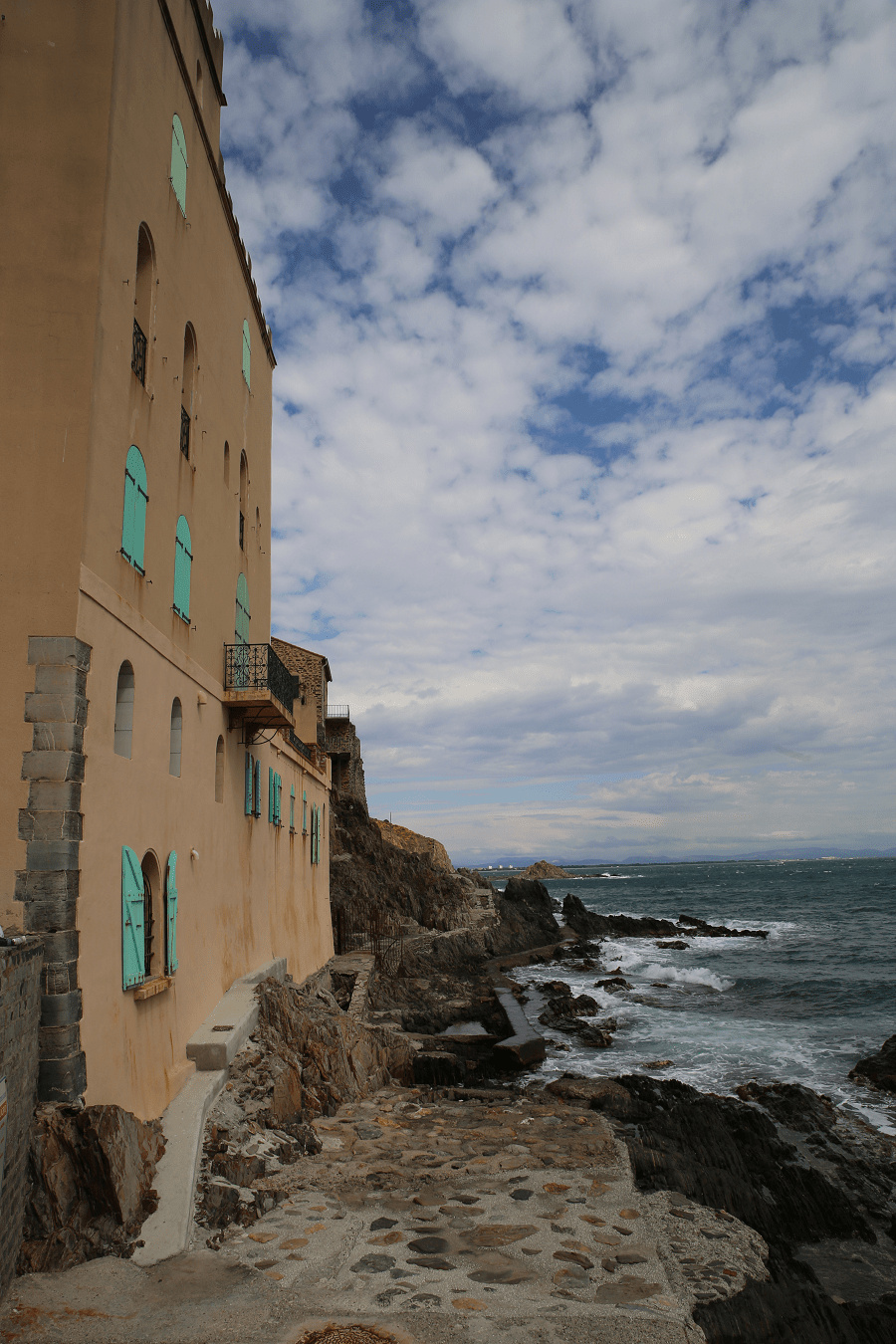 Its clean streets are full of art galleries, souvenir shops and chic boutiques. 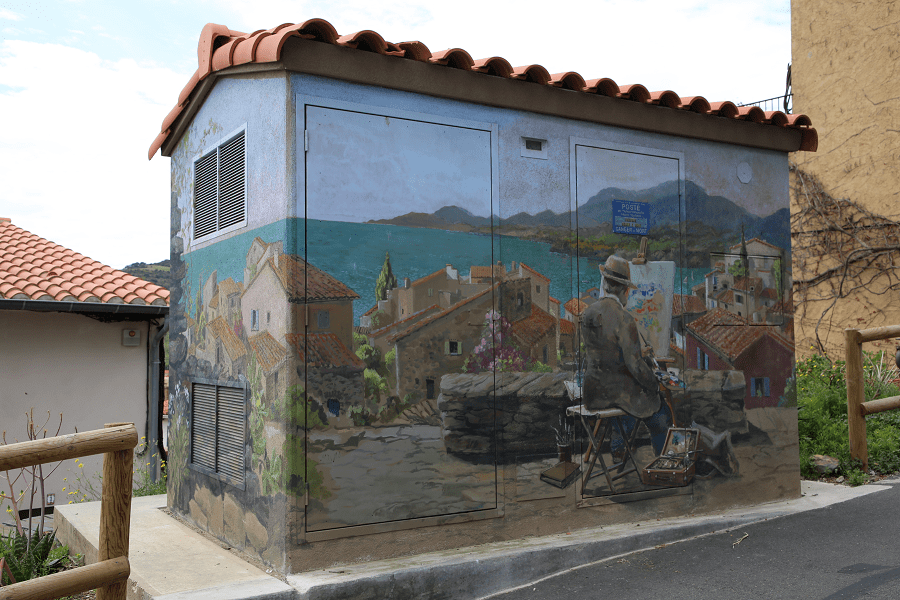