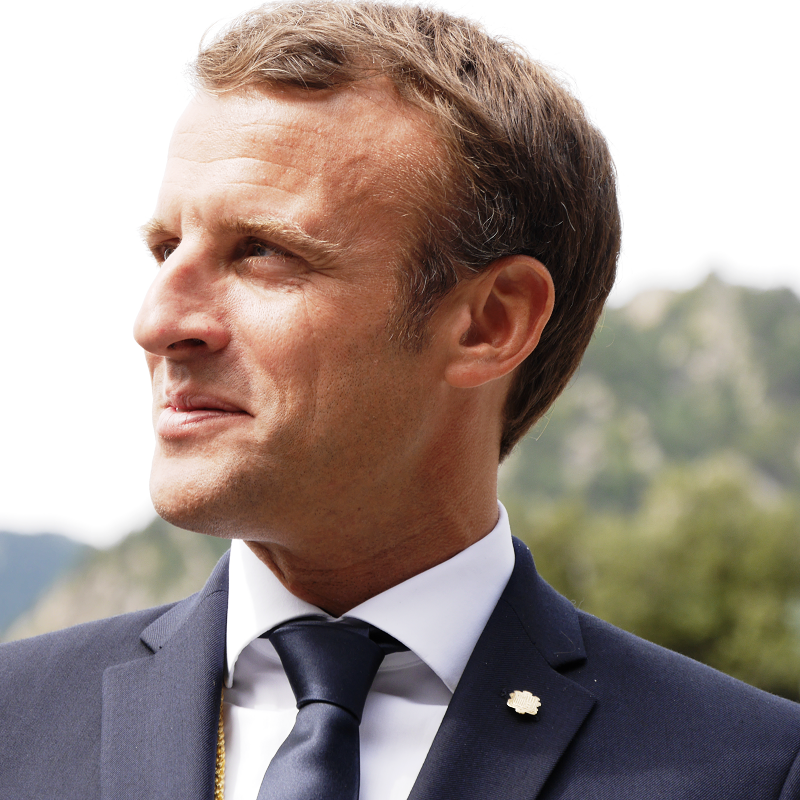 The stay of the President of France and Co-Prince of Andorra, Emmanuel Macron, on 13 September in Andorra has been programmed according to a tradition going back to the times of Charlemagne and implied a visit to the seven parishes. Emmanuel Macron began his visit at 9:15 a.m. at the parish of Canillo, and then its procession went to Encamp and afterwards to Sant Julià de Lòria (a parish neighbouring Spain).

Regarding the procession, the car of the President of France and Co-Prince of Andorra was a Renault Espace.

The safety protocol foresaw the blocking of the main roads of all the parishes for an hour, in accordance with the programme of the Co-Prince of Andorra in each of them. The shops in the main commercial roads closed a little bit earlier than usually. There were at many police officers with their costumes in the city as usual days but, in some places, there were also elite shooters serving.

Emmanuel Macron was in the company of the second Co-Prince, the bishop of Urgell Joan-Enric Vives, and the General Syndic of the General Council of Andorra, Roser Suñé.

The meeting of the two Co-Princes of Andorra was private in the old building of the old parliament of Andorra, la Casa de la Vall, where from time to time the applauses of the Andorran parliamentarians attending the meeting were heard.

Afterwards, the visit to the Casa d’Areny-Plandolit in Ordino was programmed. The commission had lunch in the parish of La Massana and, finally, came back to Andorra la Vella, capital of the Principality, where Emmanuel Macron held a speech of half an hour in the square Plaça del Poble. The access to the square was open to everyone.

The visit of Emmanuel Macron was more like a documentary with magnificent shots of beautiful indoors and outdoors with people dressed very elegantly. It’s amazing to see that no communication was held with the press, nor local or foreign. Therefore, all the articles and reports were “official” and as if they had been programmed in advance.

The day before, I officially contact the press office of the Champs-Élysées to ask for a blitz interview with Emmanuel Macron and I received the following response by mail: “the busy schedule of Emmanuel Macron does not involve any interview”.

Emmanuel Macron shook hands with Andorrans and tourists during all his stay on 13 September, signed autographs and took selfies with all the abundant audience. I was among them while I took pictures of all this beautiful process. Emmanuel Macron shook hands with me, and then I went to the opposite site, waiting for him again and continuing with my photo-reportage. I must say that the President has an incredible facial memory: among thousands of faces and about ten other photographers, he recognised me and said: “hello again, I just saw you”. What a shame that our communication ended there and did not become an interview.

Because of his “communication with the audience”, the work schedule of Emmanuel Macron was postponed for 45 minutes. He finished his speech when Andorra was plunging into darkness.

I remember the visit of François Hollande in 2014, as Co-Prince of Andorra. He was much more concise and less emotional.

Judging by his gestures and facial expressions of Emmanuel Macron, he really liked this visit all during the day. He was received with a lot of love in Andorra, where the kids, waving flags, shouted: “Welcome to your home!». Local media called him “our charming Co-Prince” and his popularity in the Principality has been compared to the popularity of an “international football celebrity”.

The public speech of Emmanuel Macron was interrupted several times by applauses: particularly when he was speaking about democracy and freedom of choice of Andorran citizens; about the French educational system and the will of France to continue investing in the French education in Andorra; about the need to ease the Andorran students’ access to the neighbouring French universities; about the improvement of the road connecting Andorra and France (a very painful problem for Andorra); and also about the development of tourism and affairs between Andorra and France.

The Andorran Co-Prince also mentioned the decriminalisation of abortion, confirming that it is “a matter of choice for the Andorran citizens themselves” and that France would not interfere in the abortion conflict.

Andorra is one of the last European states where abortion is a crime that can be punished with up to six months of prison.

During his speech, Emmanuel Macron addressed several times the audience as “My friends”, named the Andorran people as “mountain people fraternity” and he emphasised that Andorra is a strong nation with a strong economy.

One of the last subjects of Emmanuel Macron’s speech was the matter of the partnership agreement between Andorra and the EU. Complex negotiations are taking place to sign the corresponding agreement and Emmanuel Macron exhorted Andorran people to not fear the change and to trust him, the Co-Prince of Andorra, the “guarantor of independence” of its citizens.