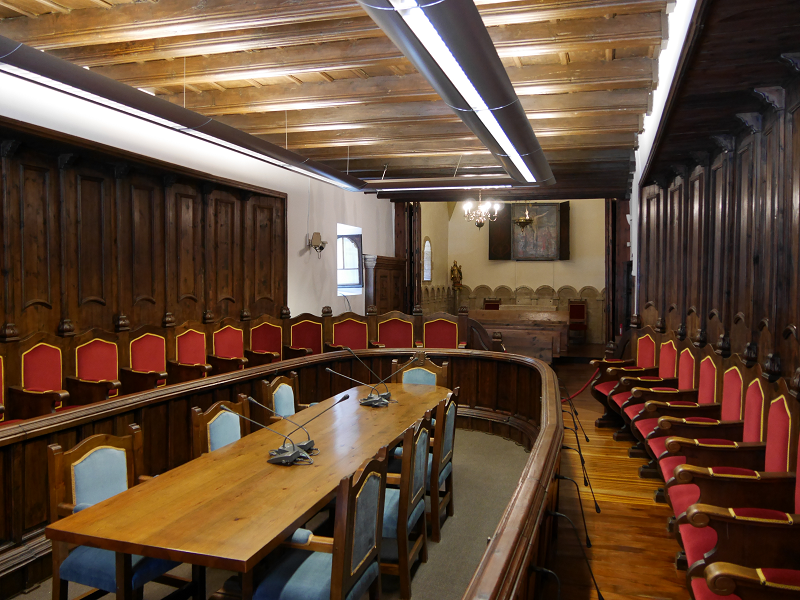 The official name of the country is the Principality of Andorra. Nowadays Andorra has a status of being a legally, democratically and socially independent country. On May 14th, 1933 the referendum over the first Constitution was held. That Constitution was approved by the majority of the citizens. According to this document a parliamentary principality was considered to be the basis of the state political regime. The form of government is a Parliamentary Principality.

Historically, the Co-princes of Andorra as well as the Head of the State possess general and inseparable powers and can represent the Principality at the highest level. As stated in different versions of “Pariatge”, the decree of the co-Princes of the State is personal and inseparable and belongs to the bishop of La Seu D’Urgell (Spain) and to the President of France. According to the same decree, the bishop of Urgell and the President of France guarantee the stability of Andorra’s political system. The Co-Princes are also in a position to solve controversial issues of the Principality and participate in the process of taking decisions by the governmental and constitutional powers.

According to the new Constitution of 1993, that was adopted as a result of the work of a three-party commission (the representatives of joint rulers, General Council (Parliament) and Executive Council (Government)), the joint rulers keep on governing the state affairs, but the Head of the Government keeps executive power. These two joint rulers keep equal authorities that, nevertheless, do not include the veto right in response to the governmental decisions. Both are represented in Andorra by the delegates, though since 1993 France and Spain have got their own embassies in Andorra.

In accordance to the World Bank report of 2016 showed that among 34 OECD members (Organization for Economic Cooperation and Development) Andorra took 5th position  in accordance to “political stability”.

The General Council represents the opinions from the general population of the country. The minimimum amount of general councillors is 28, and the maximum is 42. Half of them participate in general elections; another part is elected from the national lists. Consequently, each of the 7 administrative divisions is represented by an equal amount of councilors. The councillors are elected for a 4-year period by the citizens of Andorra on the basis of equal voting rights. The General Council (Parliament) possesses legislative power, approves the budget of the country, controls the political activity of the Government, and elects out of its staff members the representative who will perform the functions of General Sindic or the Head of Council.

The Government of Andorra consists of the Head of the State; elected by the Parliament and ministers and appointed by the President.

All Andorran citizens aged 18 and above may use their general election right to vote. The judicial system is independent. The courts of Andorra implement general laws. Civil cases are heard at the Tribunal Court (Tribunal de Corts) by a group of 4 judges (Batlles). The appeals are heard at the Appellate Court. The highest judicial body is the Supreme Court, which consists of 5 members.

Andorra has no military forces, only its small internal police. All the male population who own firearms should serve in the army on a non-material basis, although the Andorran army consists exclusively of officers. Currently, the main function of the army is to present the national flag at official events. The army of Andorra hasn’t taken part in any conflicts or wars for 700 years. During WW2 Andorra also took a neutral position, giving shelter to a large number of refugees.

Since 1975 there have been 5 political parties in Andorra. Although 3 out of 5 parties that dominated the political arena in the previous years, broke apart at some point during their power. The Liberal Union changed its name to the Liberal Party of Andorra. Later on, the liberals became the basis of a reformist coalition. Another political union was born under the aegis of a socially-democratic party of Andorra with the purpose of unifying the parties oriented for socialist ideals. Taking into consideration the amount of political parties and their sizes, it is not easy to get a majority vote at the General Council. Consequently the legislative majority emerges by means of coalitions.

Starting from 1993, 3 coalition governments have been formed in Andorra. According to election results data, in April of 2009 the Social-Democratic Party took 14 seats in Parliament, the Reformist Party took 11 seats and “Andorra for Changes”, supported by the Party of Democratic Renovations, took 3 seats. Meanwhile, results from the preliminary elections that took place on April 3rd, 2011 show that the Party “Democrats of Andorra” received 55.15% of votes in the national lists, winning in all 7 administrative divisions. The Social-Democratic party took only 34.8% of votes and consequently lost 6 seats compared to 2009. Thus, the Party “Democrats of Andorra” got 21 seats out of 28 and its leader Antoni Marti became the head of the Government for the next 4 years.

As Antoni Marti put it “the Party is willing to be open for any dialogue and is ready to correct all the previous mistakes. The Party also welcomes the development of new business forms, tourism and migration to Andorra. The cornerstone of the Party’s policy is not only to allow foreign investments in the country, but to lure it by all possible means.”

Members of the government of Andorra

Full list of parties of the parliament of Andorra

Official results of the parliamentary elections in Andorra on March 1, 2015 here

The Constitution of Andorra gives full freedom to the media. There are 3 daily printed newspapers in the country (“Diari D’Andorra”, “El Periodico” and “Bondia”) and a wide range of internet newswires. There is also an Andorra TV channel and several radio stations.

At present, the Principality of Andorra forms part of 25 international bodies:

Direct contacts of all embassies of Andorra worldwide

Look here for all politics news