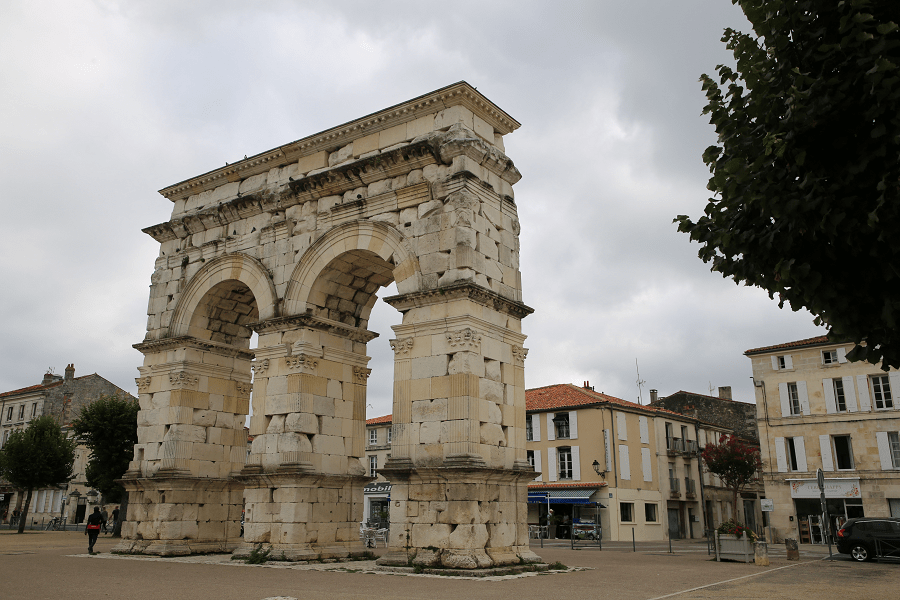 Saintes (Fr. Saintes) is a commune and historic town in western France, in the Charente-Maritime department of which it is a sub-prefecture, in Nouvelle-Aquitaine.

Because of its noteworthy Gallo-Roman, medieval and classical heritage, Saintes is a tourist destination and a member of the French Towns and Lands of Art and History since 1990. 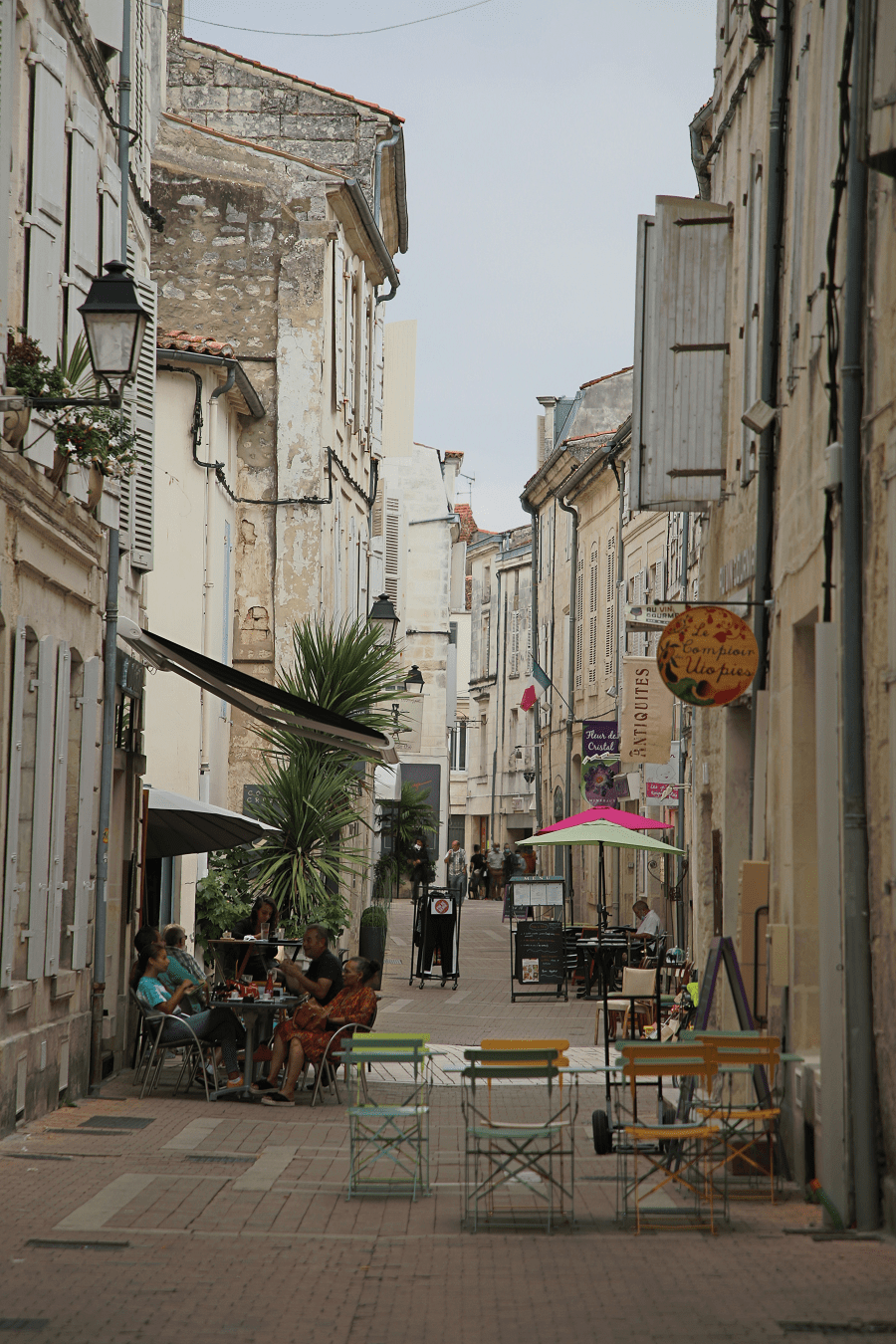 The oldest monuments of the city were erected during the High Roman Empire, a prosperous period that saw the consecration of the city as the political capital of the Roman province of Aquitaine.

The Arch of Germanicus was built around the year 18 or 19, under the principate of Tiberius, by a notable Santon named Caius Iulius Rufus. This votive arch owes its name to the dedication inscribed on the frieze of the entablature, which honours the imperial family: the Emperor Tiberius, his son Drusus and his adopted son General Germanicus.

Originally located at the entrance to the ancient bridge, it was saved from demolition in the nineteenth century, thanks to the intervention of Prosper Mérimée. 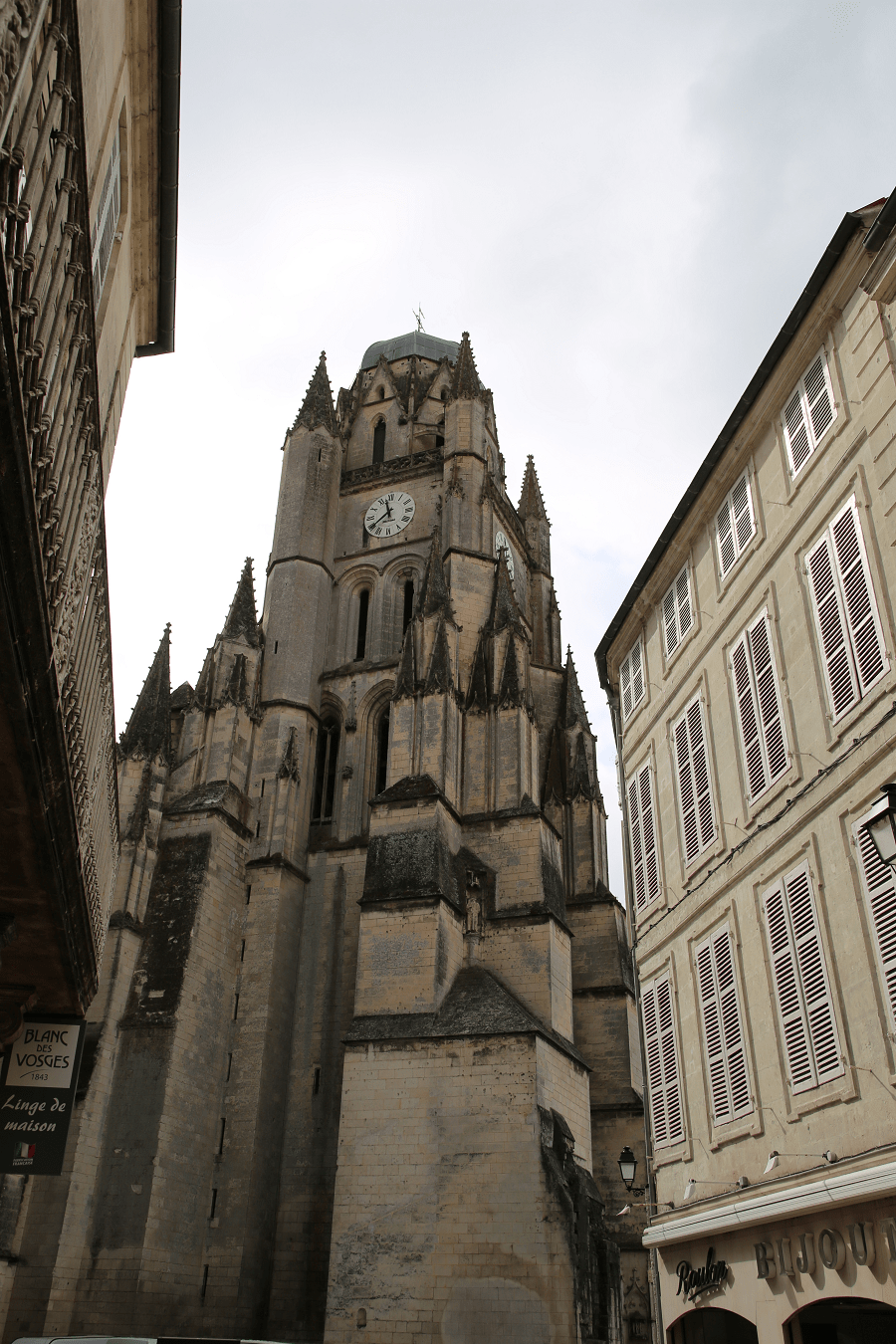 Another testimony of the Roman era, the amphitheatre was completed at the beginning of the reign of Emperor Claudius (41-54 AD).

Measuring 126 by 102 meters, it is recognizable by its particular structure, the cavea (Lat.) being supported on two slopes of the “Vallon des Arènes” and on an embankment. Wild animals and gladiators entered the arena through two vomitoria established to the west and east.

It is today one of the best-preserved amphitheatres in what was once the province of Gaul in Aquitaine. Despite the disappearance of most of the superstructures, the remains provide a true picture of what this amphitheatre could have been like at the time of its splendour. 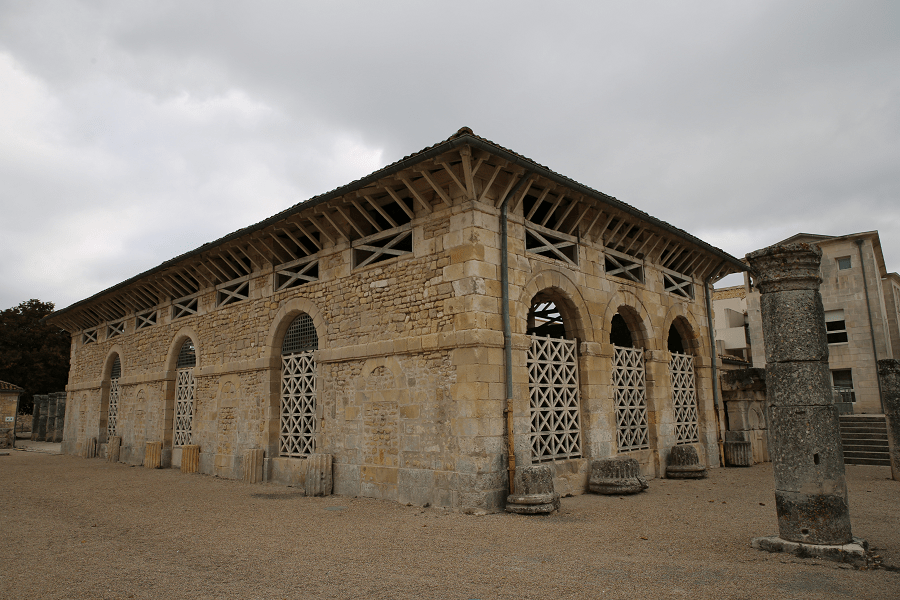 The thermal baths of Saint-Saloine are later than these two major monuments of the ancient city and seem to date from the second half of the first century. Only part of the walls of the caldarium remain today, inscribed in the ruins of an early Christian church which gave its name to the monument. Like the thermal baths of Saint-Vivien, which no longer exists, they were supplied by an aqueduct, sections of which are still visible to the north of the city and have been undergoing archaeological excavations since 2003.

Finally, the Place des Récollets hosts a few discreet remains of the ancient rampart erected at the end of the third century to protect the city from barbarian incursions.

Established at the top of the “Capitoline Hill”, overlooking the historic centre, the governor’s house is the only vestige of the old citadel designed at the start of the seventeenth century by Governor Louis de Perne. Housing hospital services until very recently, it has been awaiting reconversion since then. The eighteenth century saw the creation in the Faubourg Saint-Vivien of an ephemeral faculty of surgery under the leadership of Doctor Jean-Jacques Doussin, but it did not survive the revolution. 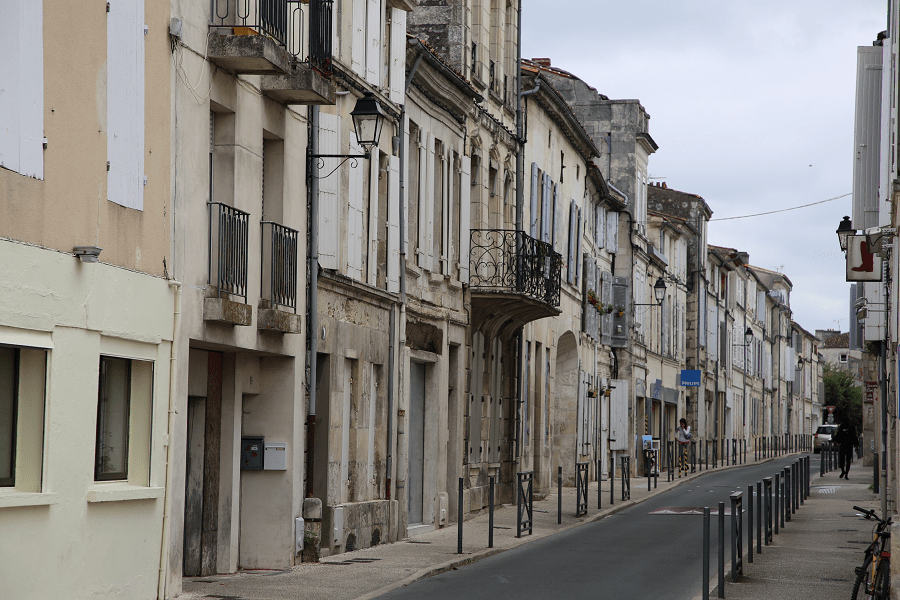 Among the oldest testimonies of sacred architecture in Saintes, the Saint-Eutrope basilica occupies a predominant place. Built in 1081, it was then a stopover for pilgrims on their way to Saint-Jacques-de-Compostelle. Its bell tower surmounted by a flaming spire dates from the fifteenth century and is due to the donations of King Louis XI. Its crypt or lower church is one of the largest Romanesque crypts in Europe. Since 1999, the basilica has been classified as a UNESCO World Heritage Site under the Routes of Saint-Jacques-de-Compostelle in France.

Located in a former suburb of Saintes, on the right bank of the Charente, the Abbaye aux Dames, place de l’Abbaye, is a monastic complex founded in 1047. The Sainte-Marie church, largely taken over in the twelfth century, is with a tripartite facade characteristic of the Saintonge Romanesque style; its pinecone scale bell tower appears as a legacy of ancient architecture. The adjoining convent buildings were completely rebuilt in the seventeenth century after a succession of devastating fires. 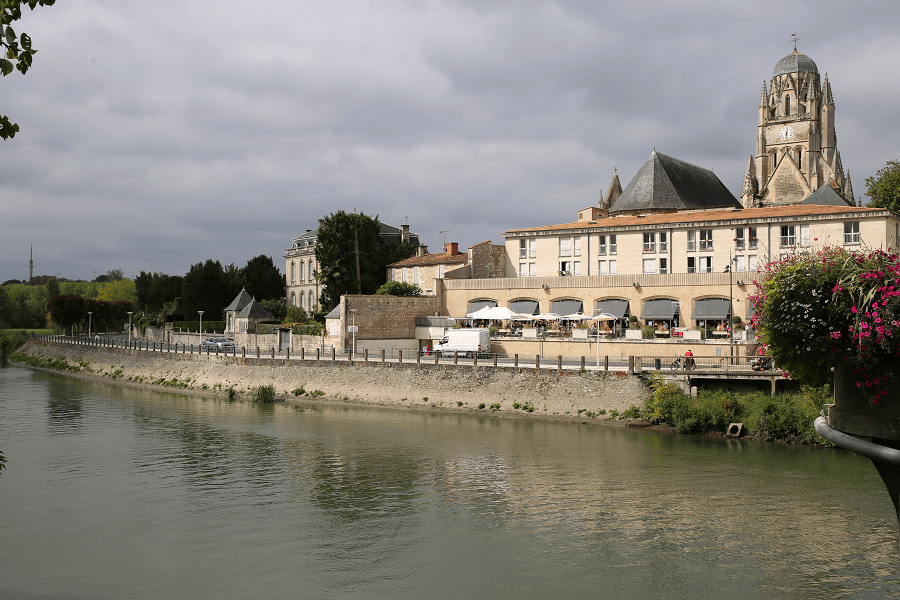 The historic centre of the city concentrates several medieval religious buildings. It is dominated by the massive silhouette of Saint-Pierre Cathedral, Synod Square, whose bell tower topped with a copper dome rises to 58 meters. The atypical architecture of the cathedral is due to the depredations committed during the wars of religion.

A few meters from the cathedral stands the former Jacobin convent, converted into a media library. It retains a flamboyant Gothic style chapel dating from the fifteenth century.

The counter-reform policy led to the installation of several convents during the seventeenth century:

Récollets convent, demolished in the 1960s and of which only a portal decorated with cherubs’ heads testifies. 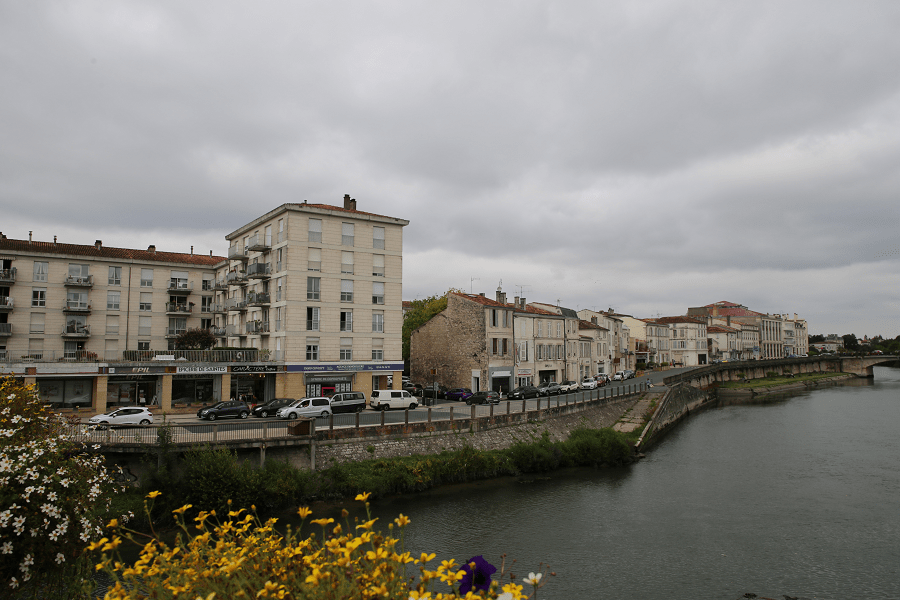 The Jesuit Chapel, built in 1610, suffered a similar fate. Only a few ruins remain near the cathedral, in the André-Maudet square.

Overlooking the Charente, the seminary of the Fathers of the Mission proceeds from the same desire to bring the Reformed back into the bosom of the Catholic Church. Built from stones taken from the old citadel, it is made up of a monumental building built from 1644. 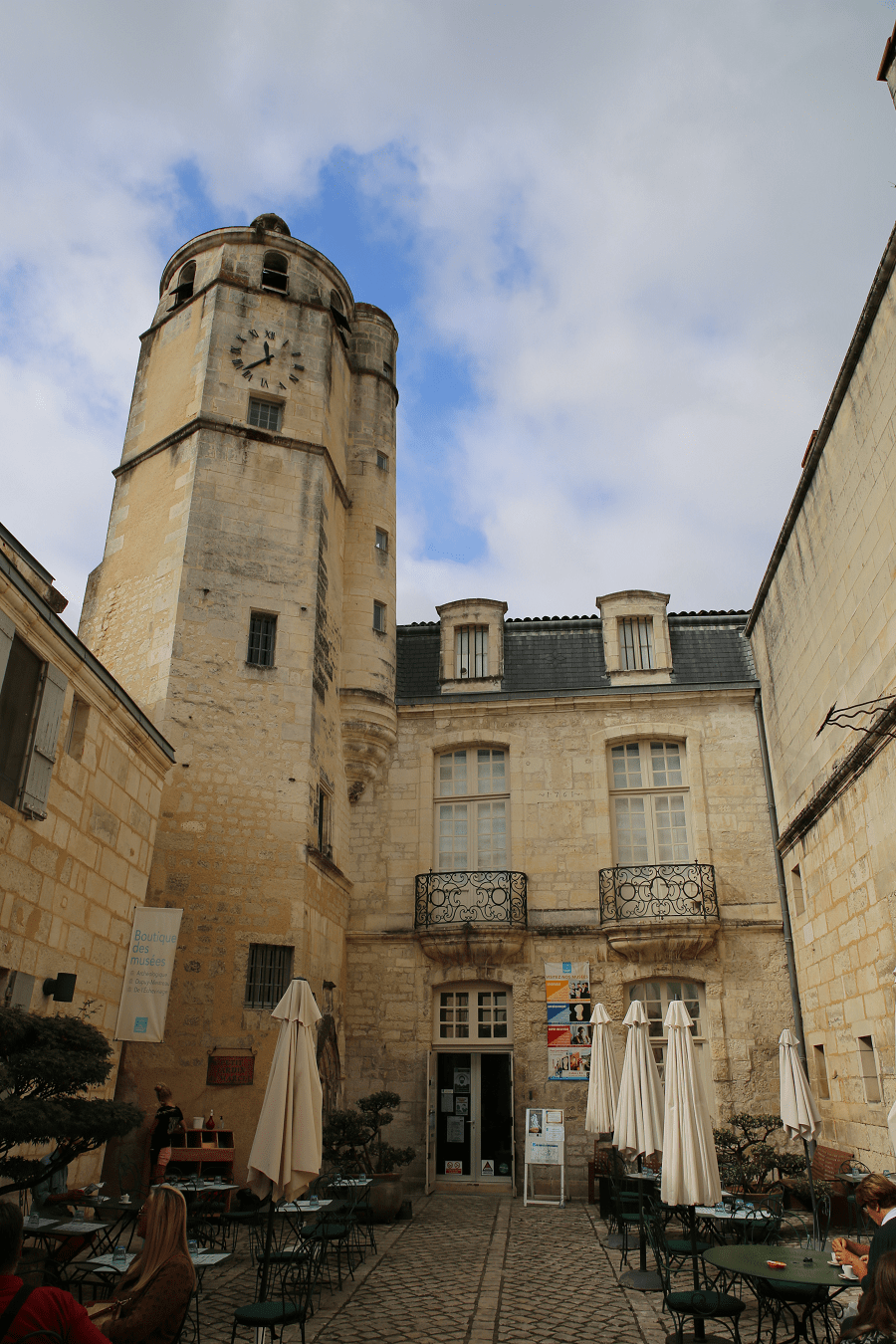 The College of Benedictines is the only testimony to eighteenth century religious architecture preserved in Saintes. Founded by the Jesuits in the seventeenth century, it was then entrusted to the Maurist Benedictines who began the reconstruction of all the buildings in 1780. The Jesuit chapel in rue Chapsal, erected in 1782, has a monumental facade in neoclassical style.

The nineteenth century saw the reconstruction of the Saint-Vivien church in a style inspired by neoclassicism. The Saint-Pierre chapel, built in 1870, the Saint-Louis church, which is six years later, and the Notre-Dame-de-Recouvrance church (1891) are characteristic of the neo-Gothic style. 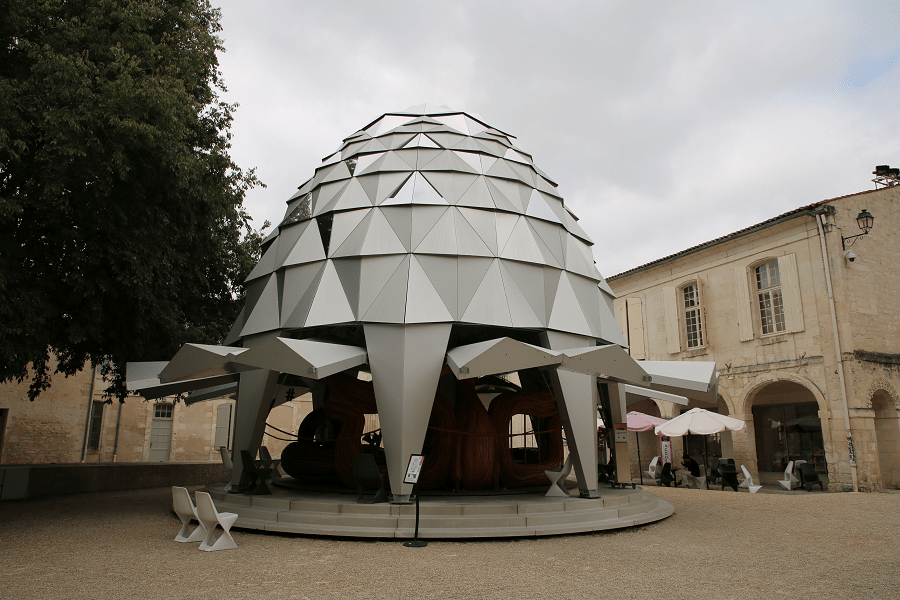 The Parisian architect Adolphe-Augustin Rey designed the Protestant Temple of Saintes, which was built between 1904 and 1906. It presents an architecture integrating neo-Romanesque, neo-Byzantine and art nouveau elements.

The city’s public museums are devoted to fine arts, archaeology, and ethnography. One of the most visited is the Presidial Museum, which features a collection of paintings spanning a period from the sixteenth to the eighteenth century. Among the major works to be exhibited there, an Allegory of the Earth by Jan Brueghel de Velours or an Allegory of Peace of Amiens by Pierre Lacour. The museum also houses Saintonge ceramics, a tribute to the master Bernard Palissy who discovered the secret of enamels and other “rustic figulines” in his Saintais workshop around 1540.

Another museum devoted to the fine arts, Le musée de l’Échevinage presents works of art of nineteenth and twentieth century romantic or regionalist artists. In addition to the works of Gustave Courbet or Joseph Bail, there is an important collection of porcelain from Sèvres. 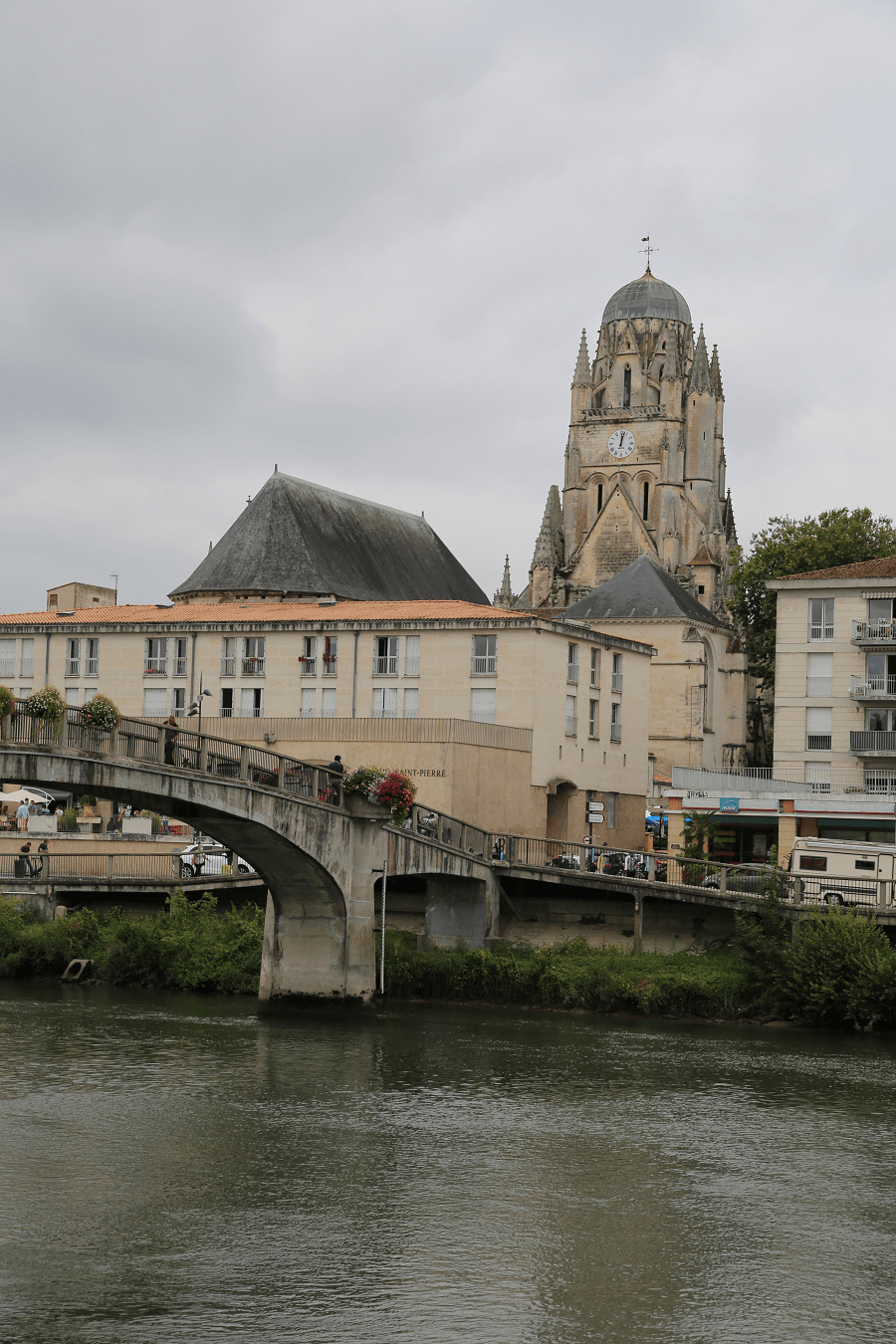 The Dupuy-Mestreau museum is devoted to the art and traditions of Saintonge, Aunis and Angoumois. Founded in 1920 by an individual named Abel Mestreau, it was bought by the municipality in 1992.

Located on the opposite bank of the Charente, the archaeological museum brings together a collection of lapidary elements dating almost exclusively from the Gallo-Roman period, a period which marks the height of the city and its consecration as the first capital of the Roman province of Aquitaine. Still on the right bank, near to the railway station, the Educational Museum of Prehistory is the only museum not owned by the municipality. Founded in 1959, it presents collections and educational documents devoted to this period.

The Peace Festival is an annual event that brings together traditional and folk music groups from several countries around the world. Concerts, street performances, traditional markets or even “peace gala” are among the main activities offered. The festival offers activities in several neighbouring towns such as Thénac, Saint-Porchaire and even Cognac. 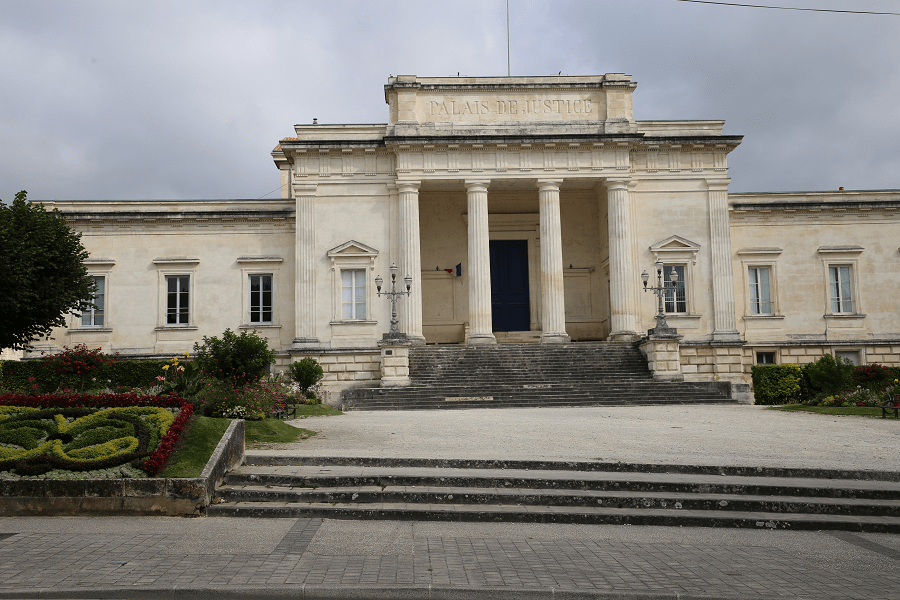 The festival of Saintes takes place every July and offers a classical music program originally in the abbey but increasingly in other places of the city. In 2009, aperitifs-concerts were organized alongside the festival until August.

Fan-shaped ears are a festival dedicated to “unusual music.” Organized over three days in partnership with local associations and social centres, it offers an offbeat program. Concerts, parades, performances by street artists and plastic art exhibitions are the main highlights of this festival.

The Coconut Party is a cultural event dedicated to contemporary music (indie-pop, young talents and Métis music). Evening concerts are organized in the grounds of the Geoffroy-Martel theatre. Since 2013 the Coconut Party has also become the Coconut Music festival which takes place at the Ladies’ Abbey on the second weekend of September.

The New Year’s Eve cavalcade is a pedestrian race traditionally organized on the evening of December 31. Main activity of the winter season, it is extended by a flower parade punctuated by the performances of bands strolling in the streets of the city centre. 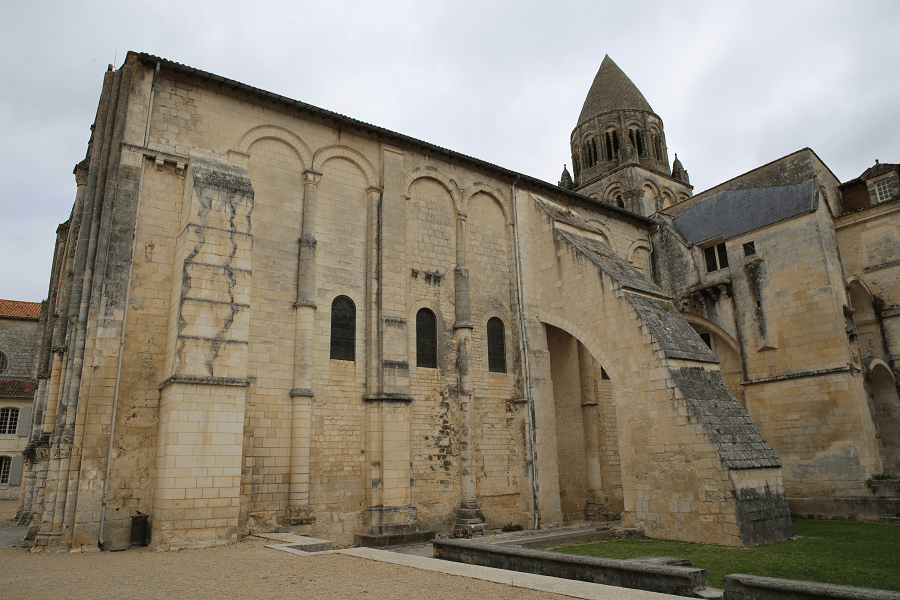 Saintonge gastronomy is mainly focused on three types of products: products of the land, seafood and vine products.

Preparations based on pork meat occupy a preponderant place in regional cuisine: thus gratons or crickets, kinds of rillettes made from hash browns and confit in their fat, gigorit, a civet mixing blood, throat, liver and onions, or worse, a sauce made from fressure, onions and white wine from the country. 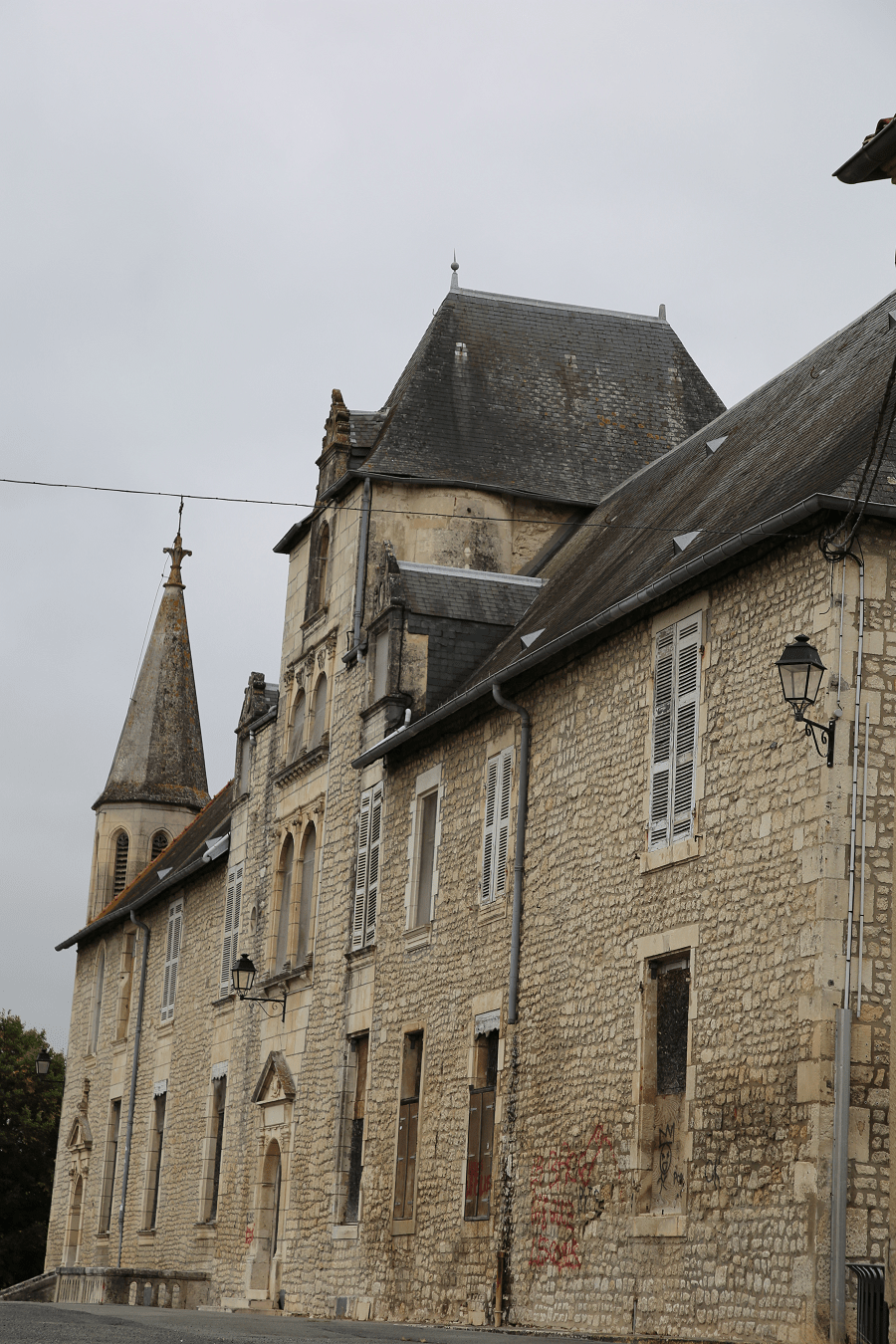 Saintonge cuisine naturally incorporates many recipes based on “cagouilles,” the local name for the squirrel snail. The guardian animal of Saintonge is notably cooked “charentaise”; that is to say cooked in a court-bouillon decorated with white wine, garlic and breadcrumbs.

Among the other local specialties, it is also worth noting the mouclade, a dish based on mussels, pibales (eel fry caught in the Gironde), oysters from Marennes-Oléron, sardines from Royan, “thyeusses de gueurnouilles” (frog legs) or “sanglette,” a pancake made from chicken blood and cooked onions.

The region’s vines are used to make famous eaux-de-vie, such as Pineau des Charentes and even more, Cognac.

In Saintes, you easily can find cosy looking boutiques selling everything from artisan drinks, to handmade clothes, to high-end fashion.

The city is equipped with halls, which are located in the city centre, in the immediate vicinity of the cathedral. Markets are held from Tuesday to Sunday at various points in the city: Tuesday and Friday mornings along the Cours Reverseaux, Wednesday and Saturday mornings on Cathedral Square, Thursday and Sunday mornings in the district Saint-Pallais. Every Thursday is also held a weekly market in the district of Bellevue. 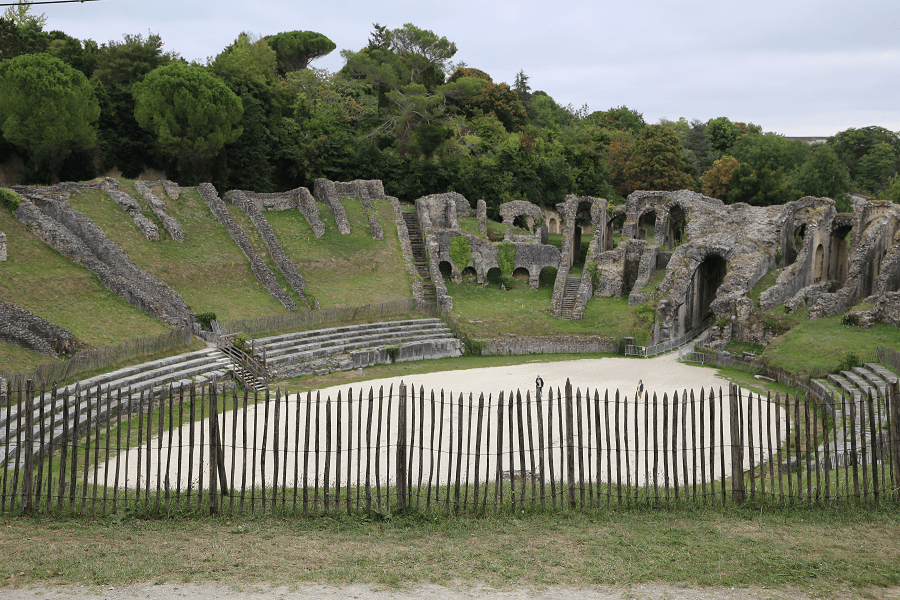 The fair of Saintes takes place every first Monday of the month. Visited by nearly 40,000 people, it remains one of the largest in France. Formerly primarily intended for the sale of agricultural products, it now presents a wider range of products.

The agglomeration of Saintes does not have an airport, it is 35 km from Rochefort-Saint-Agnant airport which offers flights to several European destinations (the British Isles in particular), and about 80 km from La Rochelle – Ile de Ré airport. About 125 km to the south, Bordeaux – Mérignac international airport connects the region to many cities around the world.

The Gare de Saintes (train station) is at the focal point of five railways that link the agglomeration to Nantes (by La Rochelle), Bordeaux, Angoulême, Niort and Royan ; the trains are mainly part of the regional rail network TER Nouvelle-Aquitaine and the network Intercités.