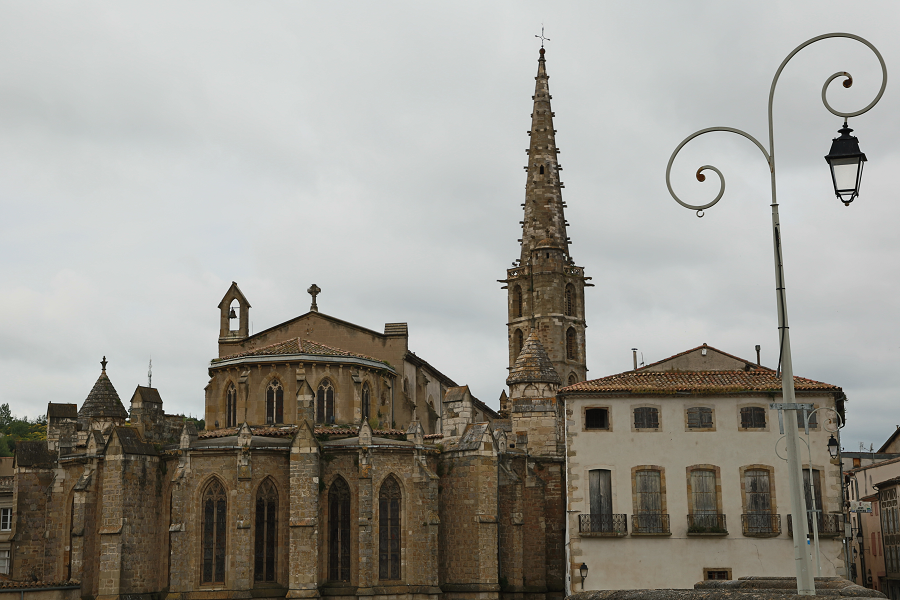 Limoux is a commune and sub-prefecture in the Aude department in the South of France (Occitania), named after the river of the same name, and also known as the “Cathars country”. The town is located about 30 km south of Carcassonne.

They established Limoux originally on Flassian Hill and then moved to the Aude bank. Presumably, the town arose in the VIII century and it belonged to the abbey of Saint-Hilaire initially. At first, Limoux was under the power of the Narbonne Archbishop, and then, in the X century, the town came under the control of Count Razes (Comte du Razès), who enjoyed royal privileges. The town has since flourished actively thanks to the fabrics and leather trade.

Limoux was located in the heart of Catharism and in the 13th century, during the Crusade (1209-1229), initiated by the Catholic Church against heresy, Simon IV de Montfort (the fifth Earl of Leicester, the French nobleman and leader of the Albigensian Crusade, later killed during the Toulouse siege in 1218) took it without much resistance.

They destroyed the town fortifications and the town passed into the power of Lieutenant Lambert de Turry, who became Lambert de Limoux.

Catharism took place in Limoux until the XIV century: Cathars made up about 15% of the population.

The town began to flourish again in the 14th century thanks to the clothing and leather industries. The Aude River’s right bank is a tannery area called the Blanquerie.

Black Death flared up in Limoux in 1348.

The Prince of Wales (traditionally the eldest son of a British ruler) ordered the Black Prince, Eduard Plantagenet, (otherwise known as Black Eduard, who received such a nickname due to the color of his armor) to plunder the town in 1355.

There was a great confrontation between Catholics and Calvinists, which grew into a 30-year civil war, again destroying the town’s industry in the XVI century. Catholics led by Jean de Lévis besieged and devastated Limoux in 1562.

The plague broke out again in Limoux in the 17th century.

The municipal institutions marked the 18th century. Industry revived and trade with Spain began to flourish.

The French revolution did not affect the town’s economic growth.

The textile industry declined in the 19th century but the footwear industry replaced it. Wine production was developing in parallel.

The town introduced the universal suffrage on April 23rd, 1848.

They established the Limoux firefighting company on November 11th, 1860.

Several residents of Limoux died because of severe flooding in 1891. The water level in the Aude River exceeded 7 meters.

Limoux winemakers took part in the revolt of winegrowers and demonstrations against the “wine crisis” in Carcassonne and then in Montpellier in 1907.

On August 19th, 1944, the town was liberated from the German occupation forces that conquered Limoux on November 28th, 1942.

Limoux is part of the Limouxin and Saint-Hilairois communities association today. The town has its own gendarmerie, seven public pre-schools and elementary schools, one private elementary school, a public college (collège Joseph-Delteil) and a well-known private institute (Institut Saint-Joseph de Cluny), as well as a public lyceum (lycée Jacques-Ruffié). There are no higher educational institutions in the town.

With regard to medical infrastructure, the town has four medical centers, two hospitals and a clinic (Clinique des Tilleuls). Limoux does not have its own maternity ward. The main medical center is in Carcassonne.

Limoux is considered to be the birthplace of sparkling wine. At least most wine historians claim that monks from Saint-Hilaire Monastery, adjacent to Limoux produced the first sparkling wine in 1531.

The first mention of Blanquette de Limoux sparkling wine dates from 1544. Since then, it has had an excellent reputation among winemakers in France.

Limoux is also famous for Pinot Noir wine production on the red soils of the Haute Vallée de l’Aude.

All high-quality Limoux wines are becoming more and more popular among experienced connoisseurs of this drink.

Traditions and the Main Limoux Carnival

Limoux is known for its carnival, which lasts for about three months. The festivities begin about 12 weeks before the Rameau Catholic religious holiday (Palm Sunday).

Carnival participants dance traditional dances under medieval arcades in Place de la République every weekend. According to legend, the Limoux carnival dance comes from the gestures of winemakers who crush grapes with their feet to collect the juice.

They have celebrated Carnival since 1604. It was originally a millers’ celebration, who roamed the city, snapping whips, throwing flour and candied almonds. They danced the farandole (Provencal folk dance), playing hautboy and percussion instruments.

Limoux Carnival is considered the longest in the world. They organize fairs throughout the carnival selling a large number of local products.

The printing house museum shows the history of printing. It introduces the printing workshop at the time of Johannes Gutenberg, the German and European first printer.

The museum hosts seminars for students on writing, drawing, caricature drawing, printmaking, the art of binding, calligraphy, lithography, as well as offset and 3d printing.

The Petiet Museum invites visitors to discover a collection of paintings from the 19th and 20th centuries, made in the academic and post-impressionist styles.

Marie Petiet and her father, Dujardin-Beaumetz, who was a military artist and renowned divisionist painter, founded the museum.

They opened the museum in 1880; it exhibited paintings from the Petiet family collection. The municipality’s numerous acquisitions enriched the collection significantly later on.

The Piano Museum is a unique collection that spans two centuries of piano history. The museum is located in the St. James chapel (1324). It is the only piano museum in France. The museum has a 120-seat auditorium where you can listen to live music. The museum was opened in 2002.

The Automatic dolls Museum is a unique place, interesting for both children and adults. This is a private museum, which Martine Morand and Jean-Jaques Achache created, and their daughter Judit Morand inherited. The museum displays about a hundred units as exhibits and about 60 more characters are here in the studio.

We advise wine lovers to visit this place.

Cuisine and restaurants in Limoux

Most restaurants in the town offer traditional French and European meals. The most visited restaurants and cafes are La Taverne a Bacchus, Cafe gourmand chez Stephan, Le Vin Te Deux, and La Ciboulette.