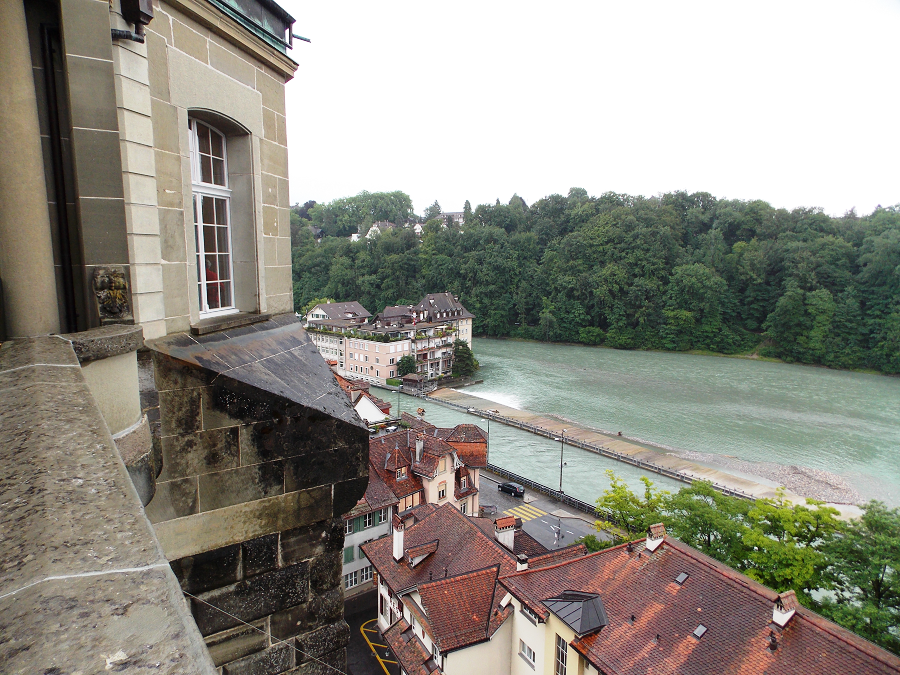 The country’s capital – Bern (Berne, Berna) lies in the central Switzerland western part and at the same time is the capital of the canton of the same name.

Bern is a tiny city despite its capital status (only 130 thousand inhabitants, together with its suburbs – about 300 thousand, so it is one of the smallest capitals in Europe), which has retained its provincial charm and a rather calm life rhythm. 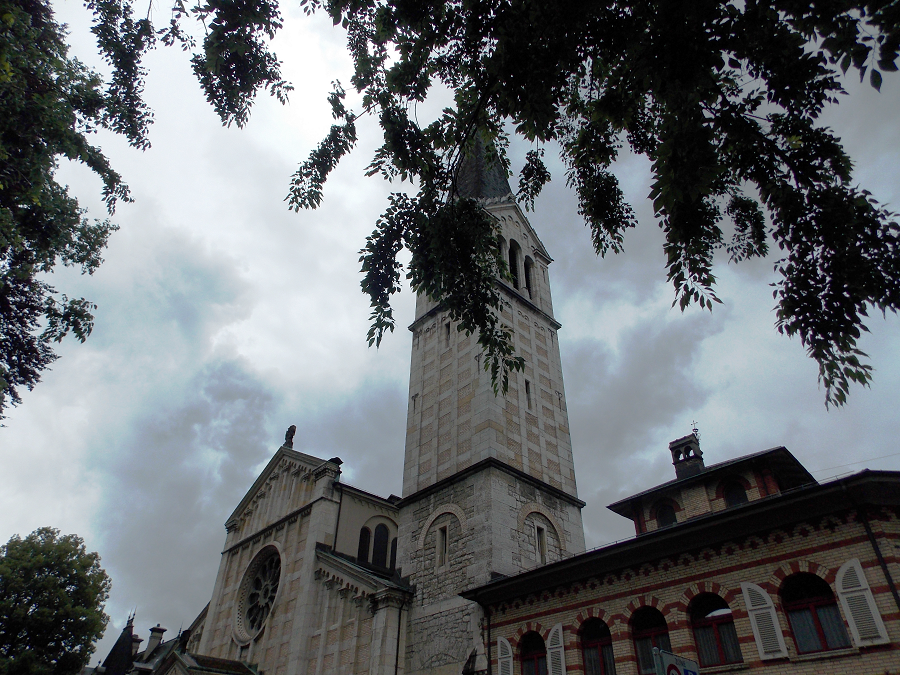 Bern was founded in the steep bend of the Aare River by order of the Duke Bertold V in 1191, he met a huge bear at this place during the hunt according to legend, the city got its name in the bear honor, it is also the official symbol of the Swiss capital. However, Roman chronicles indicate the Brenodor Celtic settlement presence in this place, it was sheltered securely by the banks of a wide river. However, it is precisely the Bern historical center, included in the UNESCO World Heritage List, lying in the Aare river channel loop, which is its main attraction. Despite the Old Town compact size, one can walk for days on its cobbled streets and alleys, and its characteristic arcades, street fountains, towers, and numerous cafes overlooking the river waters with their terraces attract thousands of visitors here. 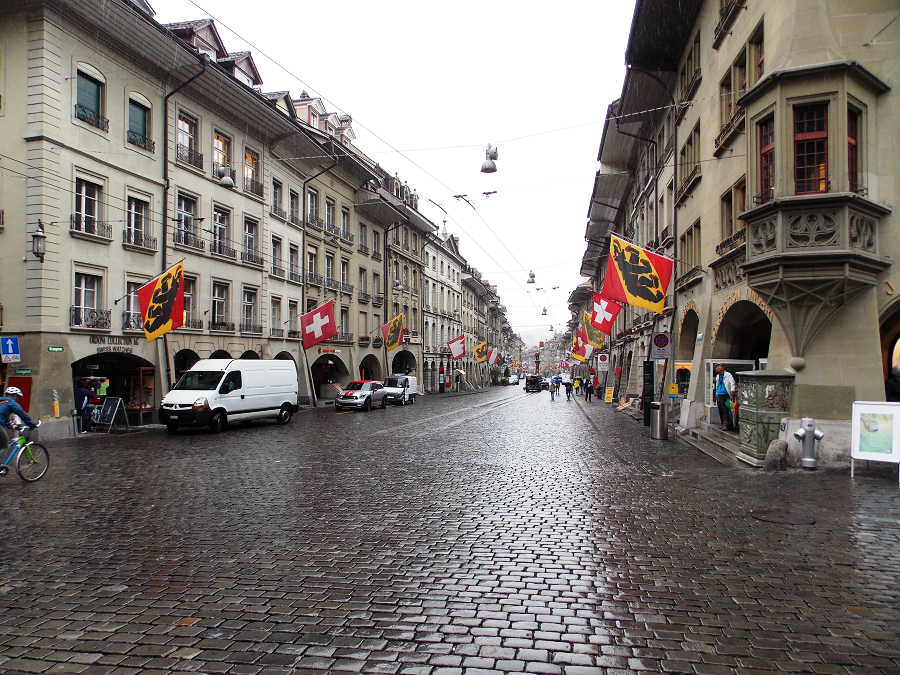 The Bern historic center is essentially formed by a chain of Spitalgasse, Marktgasse, and Kramgasse streets, abutting the Niederbrücke bridge. The main attractions are concentrated here, in the old center, – the Käfigturm or Prison Tower (1256) with a bell tower (1643), as well as the famous street fountains (XVI century). You can’t help but visit the city hall (1406) with a large reception hall, wooden ceilings of the 15th century, as well as the Bear Pit that gave the city its name (Barengraben, there are two bears from Russia living here now). The famous Clock Tower (Zeitglockenturm or Zytglogge, 1191) with a gate is the same city symbol, like the bear, it is considered the Bern center – all distances in the canton are measured from it. Well, a huge astronomical clock (1527-1530) with moving figures, occupying almost half of the tower height, is one of the three oldest watches in Switzerland. 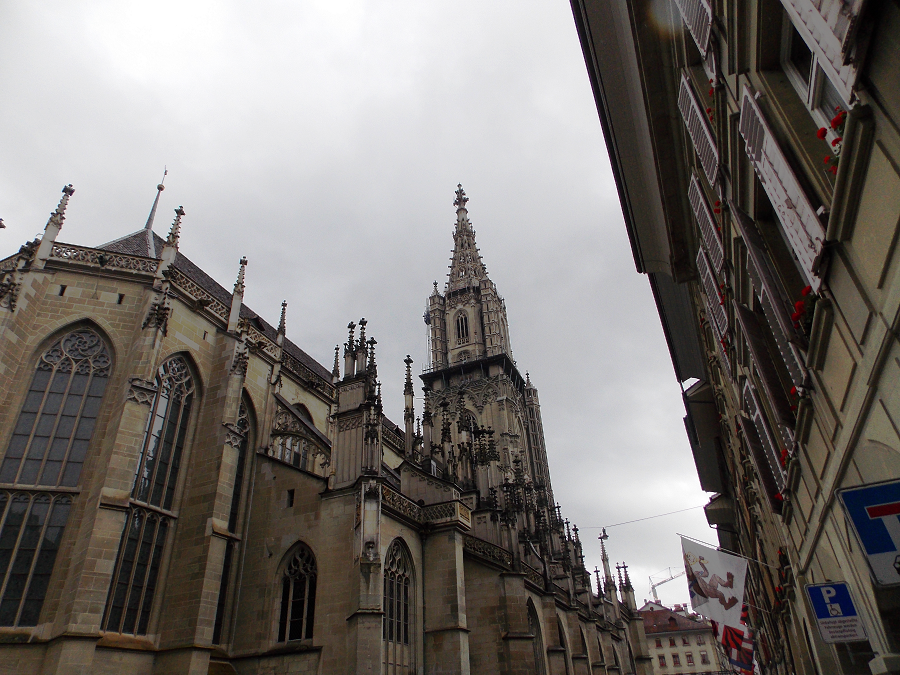 The Bern late Gothic cathedral or Bern Minster (1421-1893) is unmistakably recognizable from any city point by its characteristic spire, dominating the quiet quarters. This is the tallest church in Switzerland (100 m). Elegant internal spans (1572-1573) with a number of small chapels, numerous statues (XVI century), the main portal by sculptor Küng (1457), and stained glass windows (XVI-XIX centuries) only emphasize the rather gloomy interior of the cathedral. You can climb on a narrow spiral stone staircase of 254 steps to the bell tower (4 francs), which offers absolutely stunning views of the city and surroundings. On the church’s south side is the of the Munsterplattform supporting terrace (XIV-XV centuries) – during the Reformation, many icons and ornaments were brought here from the cathedral and thrown, and later it was planted with chestnuts and furnished with elegant baroque pavilions, so now it is one of the most beautiful promenades of the city stretching directly above the Aare waters to the Kirchenfeldbrucke bridge (Kirchenfeldbrucke). 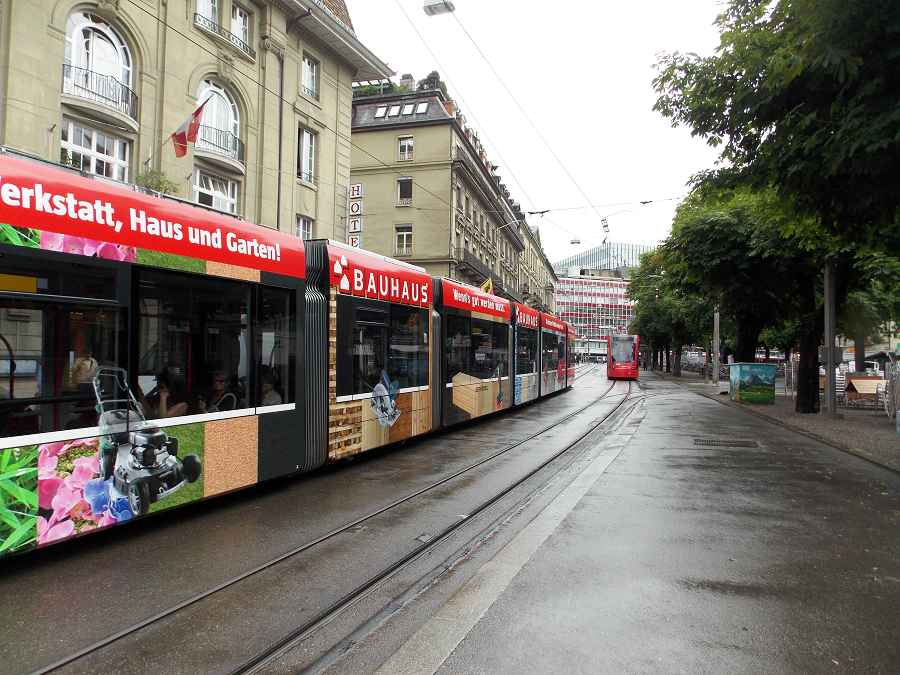 The Niedegg Castle was located in ancient times in the very east of the peninsula, on the site of which the church of the same name (Nydeggkirche, 1341-1346 now stands, that is, in its modern form it was already built on the ruins of a castle destroyed by the townspeople in 1268) with a bell tower (1480- 1483). Nearby you can find the oldest city bridge – Untertorbrücke (that is “Bridge at the lower gate”). The wooden bridge built in 1256 was destroyed by the flood of 1460, and the townspeople began to build a new stone passage just the next year, but the process lasted for 29 years. It was the only permanent bridge within the city limits in general for a long time – it even had its own chapel of the Holy Virgin Mary (Mariakapelle, 1467), only in 1840 did the Nydeggbrukke bridge finally be erected a little to the south. 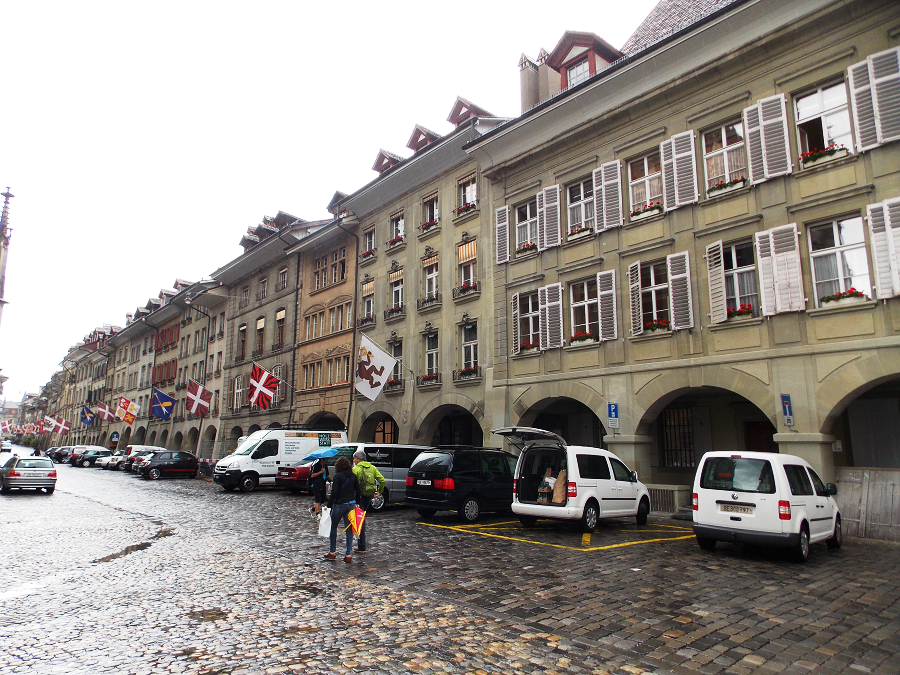 The Matte quarter located in the very south of the peninsula is one of the most attractive Old Town areas. It has been separate artisans and dockers area for centuries they have long maintained their own dialect. You can find many places completely unchanged from the Middle Ages here now. The river still flows into the open canal between Schifflaube and Wasserwerkgasse, built up with many characteristic semi-stone buildings. It is interesting that, despite the ancient appearance, these colorful mansions host mostly the high-tech companies’ offices and architectural bureaus, as well as restaurants and nightclubs, including the most popular Wasserwerk club. 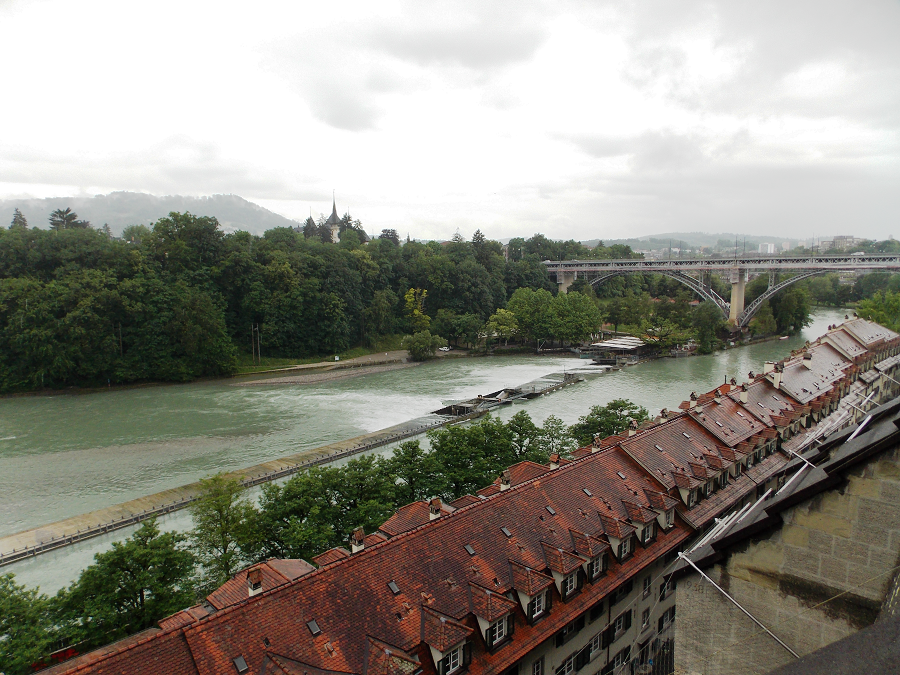 The most famous commercial area lies in the Old Town western part at Marktgasse and Spitalgasse. Numerous shopping galleries and boutiques stretch as much as 6 kilometers that is almost the old quarters’ entire length, the local travel agency advertises as “the longest indoor store in the world”. Moreover, retail outlets are so carefully built into the city’s architecture that it’s worth taking a step aside from under the roofs and awnings, and you can feel the 16th century Bern atmosphere. 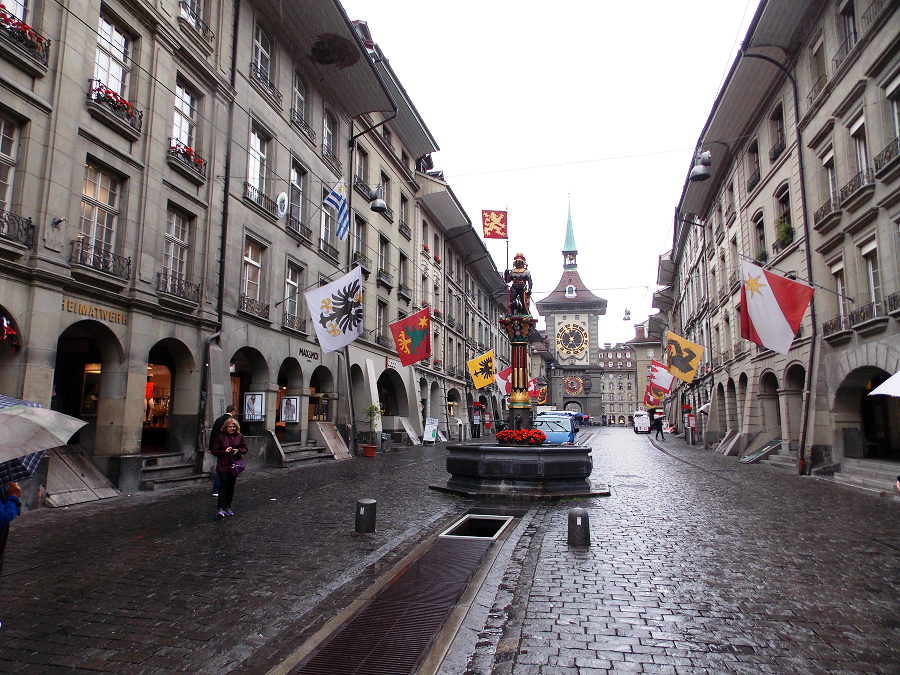 Bern fountains (Berner Brunnen) can be considered as quite an independent attraction. They are just wells equipped in the 16th century with pressure mechanisms and decorative design for the most part. Each of them is not like the others and has its own history and design. Few fountains fulfill a decorative function only out of the more than hundreds of city fountains, while the rest still work fine, although they were built in 1542-1546 according to the project of the sculptor Hans Gieng. The most famous are the Zähringerbrunnen fountain (1535) built in memory of the city founder, Mosesbrunnen (XVI-XVIII centuries) on Cathedral Square, Läuferbrunnen (XVI-XIX centuries) near the Niedegg church, Vennerbrunnen (XVI century) in front of the town hall, Gerechtigkeitsbrunnen (1543, it is interesting that there are 5 this fountain exact copies in the country), Simsonbrunnen (1544), and others. 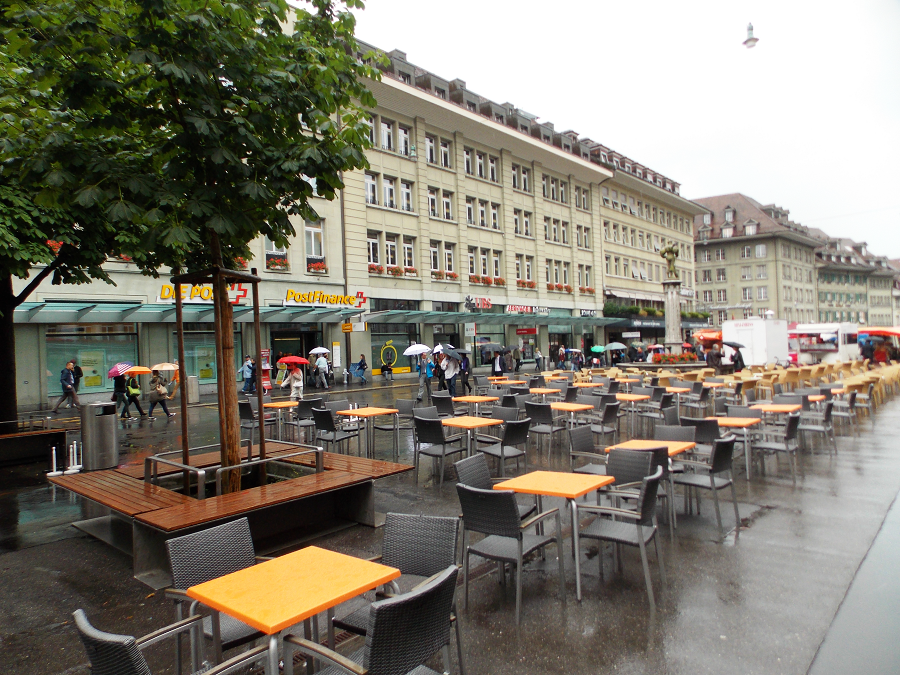 You can also visit the Federal Palace in Bern (Bundeshaus, 1857-1902 – the national parliament, the government, and part of the federal administration are located here now, but access is possible as part of an organized tour), a cascade of fountains in front of the palace (2004), an Albert Einstein house-museum (Einstein-Haus) on Kramgasse 49, Rose Garden (Rosengarten) built on the ancient cemetery site, the University of Bern Botanical Garden (Botanischer Garten der Universität), any of the 6 Bernese theaters, visit the Federal Treasury, the Federal Archives, and the Swiss National Library complexes. And, of course, you can go to museums – there are more than two dozen of them in the city. 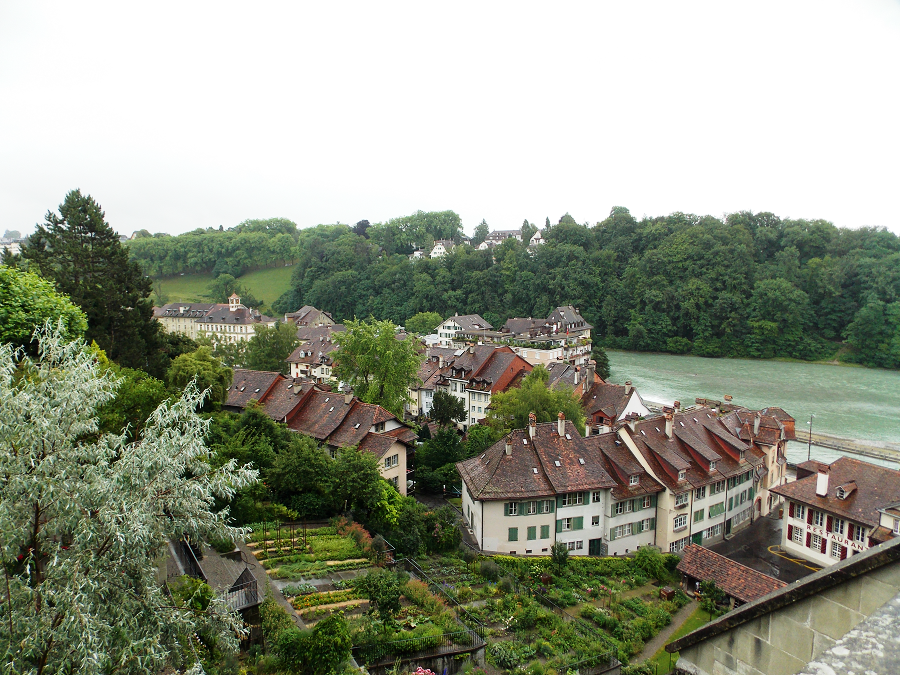 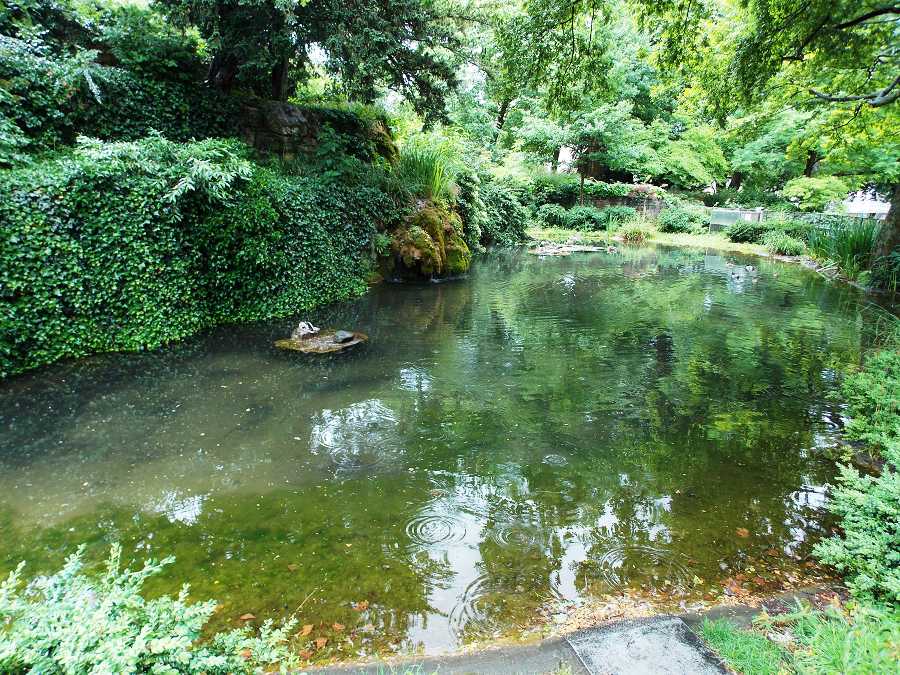 Starting in June, tourists in Bern can purchase a Museum Card discount card worth 28 francs (27 euros) for 24 hours and 35 francs (33.5 euros) for 48 hours. Its owners get the opportunity to visit 30 museums and galleries in the Swiss capital at no extra cost.

The public transport in and around Bern is operated by BERNMOBIL, which is integrated into the fare network libero with coordinated timetables, which in itself covers the area of canton of Bern and Solothurn. The fare network includes any mode of public transport, such as any kind of train (including the urban S-Bahn), PostAuto buses, trams, buses (either trolleybuses or motorized buses) and others. Fares are based on the number of zones crossed during a specified time and are independent of the mode of transport or the number of connections. The central part of Bern, excluding Bümpliz, Betlehem, Bottigen, Brünnen, and Riedbach in the west of the municipality, is part of the fare zone 100. 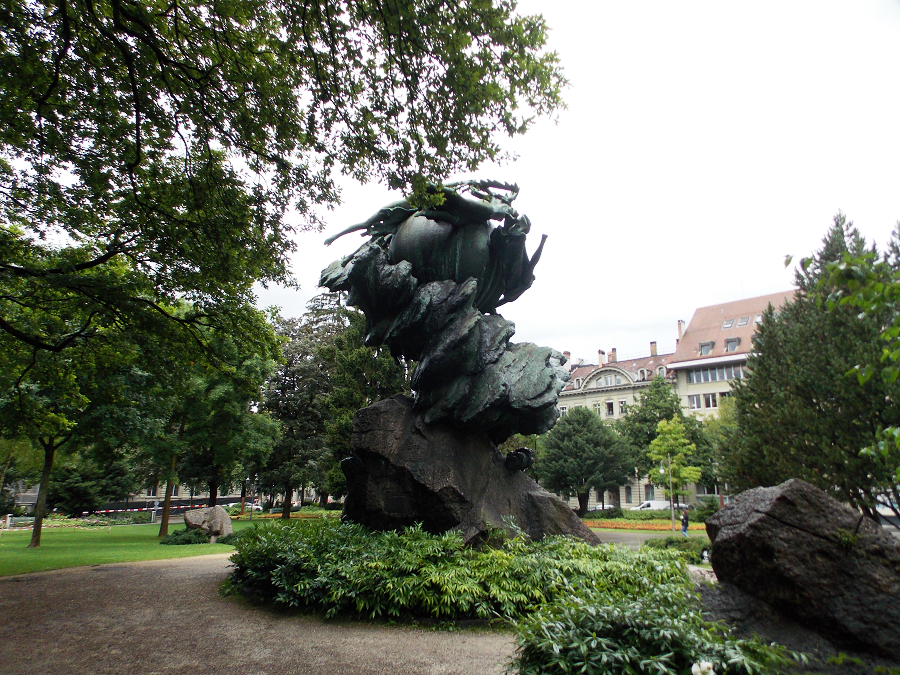 Bern’s central railway station Bahnhof Bern) (formerly known as Hauptbahnhof Bern) is not only the central network nucleus of Bern, but also of the whole urban and inter-cantonal region. It connects the city to the urban, national and international railways network and is Switzerland’s second most busy railway station (202,600 passengers per working day in 2014).

A funicular railway leads from the Marzili district to the Bundeshaus. The Marzilibahn funicular is, with a length of 106 m (348 ft), the second shortest public railway in Europe after the Zagreb funicular.

Several Aare bridges connect the old parts of the city with the newer districts outside of the peninsula.

Bern is well connected to other cities by several motorways (A1, A12, A6). 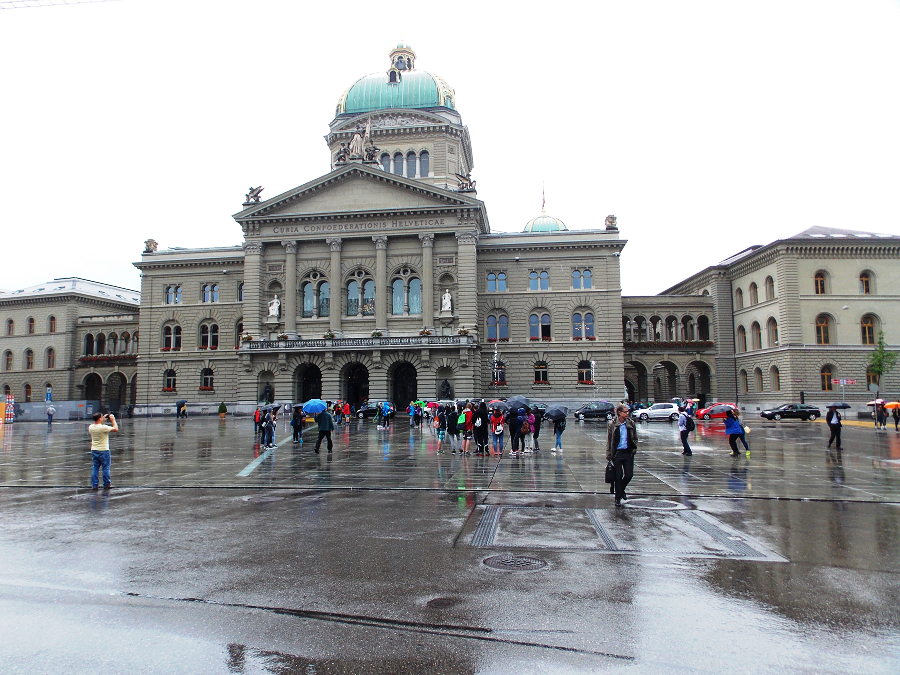 Bern is also served by Bern Airport, located outside the city near the town of Belp. The regional airport, colloquially called Bern-Belp or Belpmoos, is connected to several European cities. Additionally Zurich Airport, Geneva Airport and EuroAirport Basel Mulhouse Freiburg also serve as international gateways, all reachable within less than two hours by train or car from Bern.

Another way to save money during your vacation in Bern is Bern Ticket. It is free for all tourists staying in Bern hotels. The ticket gives the right to use public transport for the entire stay in the city. 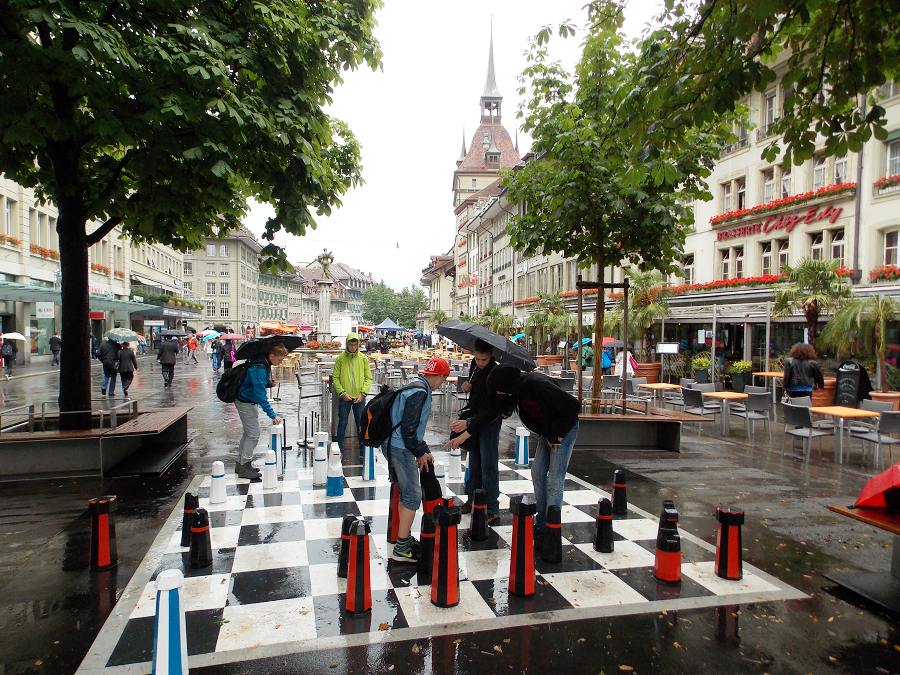 Bern’s 6 km of arcades (Lauben for the locals) are one of the longest shopping miles in Europe. Fashionable boutiques, exclusive jewelers, antique dealers and traditional markets. Everything is within easy reach, on foot and also under the cover of the arcades. 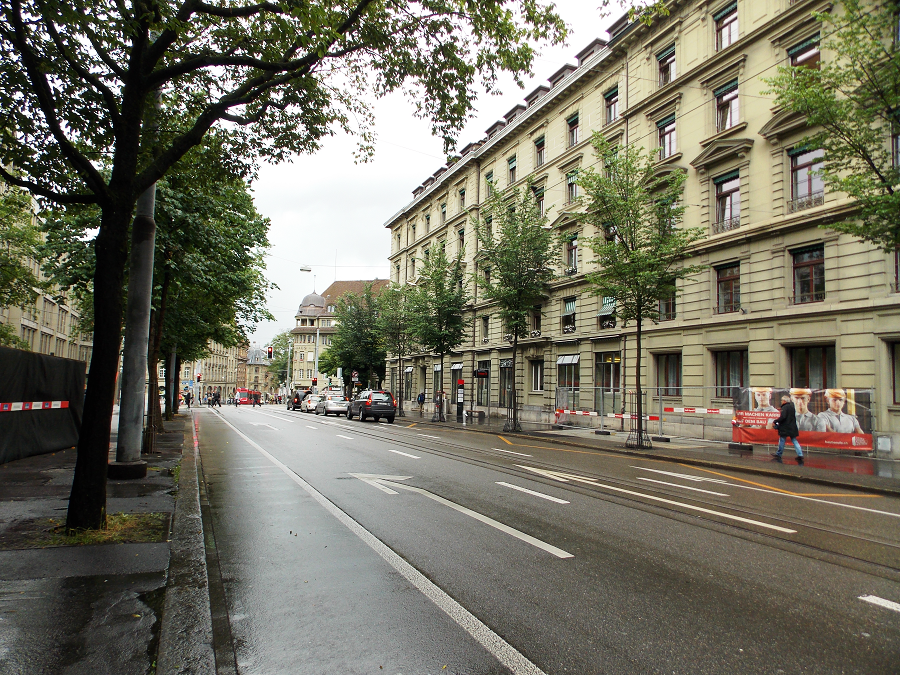 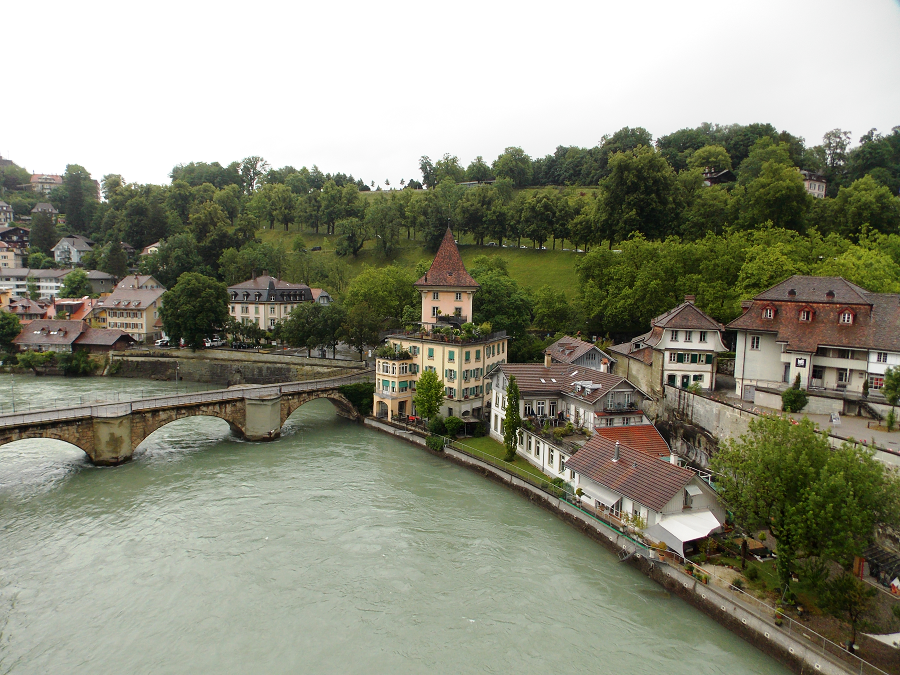 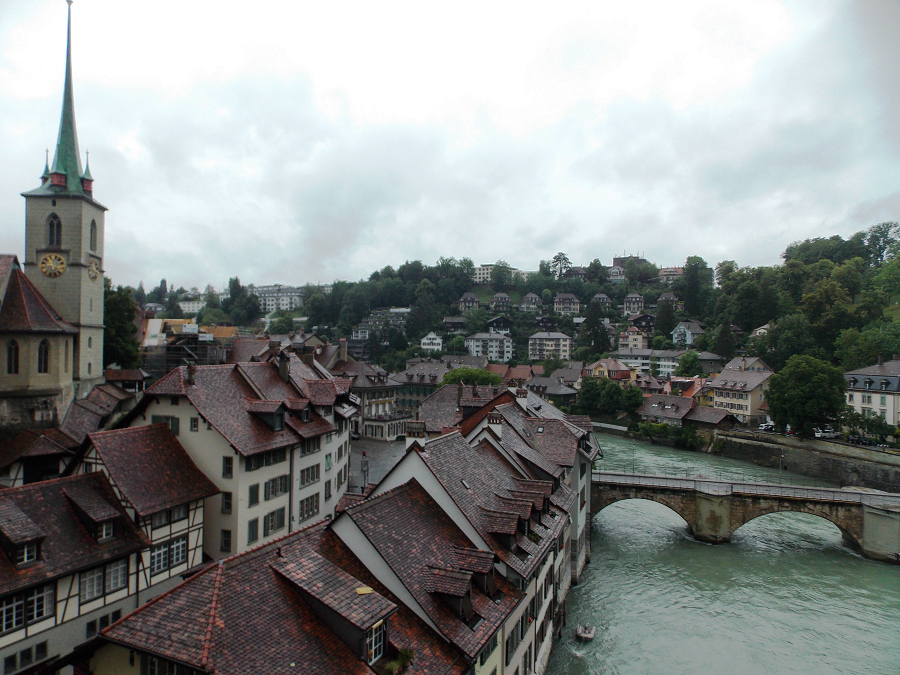