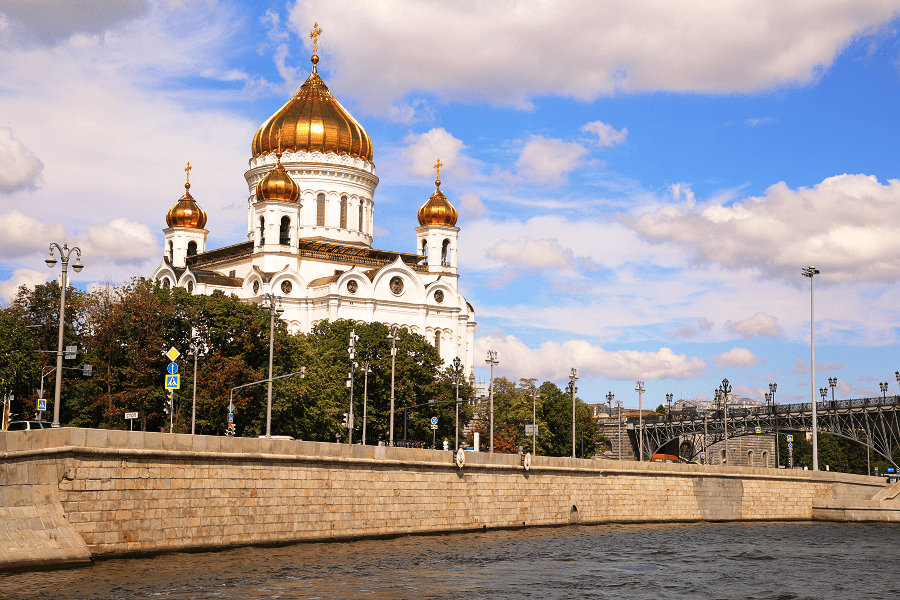 The Cathedral of Christ the Savior, or the Church of the Nativity of Christ, is the cathedral of the Russian Orthodox Church, located in the central part of Moscow on Volkhonka Street on the Prechistenskaya embankmentt of the Moskva river. The existing building, designed in the 1990s, is a reconstruction of the temple of the same name, destroyed in 1931.

The temple is located on a hill, surrounded by a small park with a complex of buildings and structures for religious and secular purposes. The temple complex also includes two small churches: a stone church of the Intercession of the Mother of God and a log church-chapel of the Sovereign Icon of the Mother of God, which is the forerunner of the modern Cathedral of Christ the Savior.

Emperor Alexander I immediately decided to build the first church in honor of the victory over Napoleon in the Patriotic War of 1812. However, in 1825, work was stopped, and the architect and other members of the construction commission were accused of financial embezzlement.

The architect Konstantin Ton was appointed the author of the new project. On September 10, 1839, the solemn laying of the cathedral on Volkhonka began. Construction began two years before and was completed in 1860, after which the exterior and interior decorations were created. On May 26, 1883, the first temple was consecrated.

The temple building was destroyed on December 5, 1931,because of the Stalinist reconstruction of Moscow. It was planned to usethe site to construct the Palace of Soviets, but in the end, the Moskva pool was created on this site. The building of the temple was recreated on the plinth using other building materials in 1994-1999.

The temple has the status of a patriarchal courtyard and is a collective cenotaph of the soldiers of the Russian Imperial Army who died in the war with Napoleon.The names of officers who fell in the war and foreign campaigns of 1797-1806 and 1813-1814 are inscribed on the walls of the temple.

The Cathedral of Christ the Savior is the largest cathedral of the Russian Orthodox Church and can accommodate up to 10,000 people.

Its total height reaches 103 m, which is 1.5 m higher than St. Isaac’s Cathedral in St. Petersburg, the height of the inner space is 79 m, and the thickness of the walls is about 3.2 m. The size of the main cross is 8.5 m, and the other crosses are 6.5 m. In plan, the temple looks like an equilateral cross about 80 m wide. The appearance of the temple repeats the traditions of the Russian-Byzantine style, which enjoyed the support of the emperor at the time of construction. The painting inside the temple occupies about 22,000 m², of which 9,000 m² are covered with gold leaf. The volume of the building is 524,000 m³.

The upper church is the Cathedral of Christ the Savior. It has three altars: the main one is consecrated in the name of the Nativity of Christ and the two side ones in the choirs are consecrated in honor of Nicholas the Wonderworker (southern) and the holy prince Alexander Nevsky (northern). Consecrated on August 6, 2000;

The lower temple is the Church of the Transfiguration, which was erected in memory of the women’s Alekseevsky monastery located on this site. It has three altars: the main one was erected in honor of the Transfiguration of the Lord and two small chapels were built in honor of Alexy, the man of God and the Tikhvin Icon of the Mother of God. It was consecrated on August 6, 1996.

The stylobate part houses the museum of the temple, the hall of Church cathedrals, the hall of the Supreme Church Council, refectory chambers, as well as technical and office premises.

Under the temple, there is a two-level underground parking for 305 places with a car wash, above which, near the temple, there is an observation deck and a complex of auxiliary buildings for religious purposes. During the descent, a small temple of the complex was built – the Church of the Intercession of the Mother of God – with the central temple in the same architectural style and a single ensemble included with it. The temple complex also includes a log temple, which is the forerunner of the main temple – the temple-chapel of the icon of the Mother of God “Sovereign”, located in the park part of the complex.

The observation deck of the Cathedral of Christ the Savior is a long terrace that consists of four open galleries located between the bell towers. Passages connect the galleries and a roof protects them from the sun and rain. Thus, they go out on different sides, that is, they give a good all-round view of the central part of the city. There is a forged fence around the perimeter.

The observation deck of the Cathedral of Christ the Savior is 40 meters tall. Entrance tickets are sold at the box office, which is located near the temple on the side of the Patriarchal Bridge. 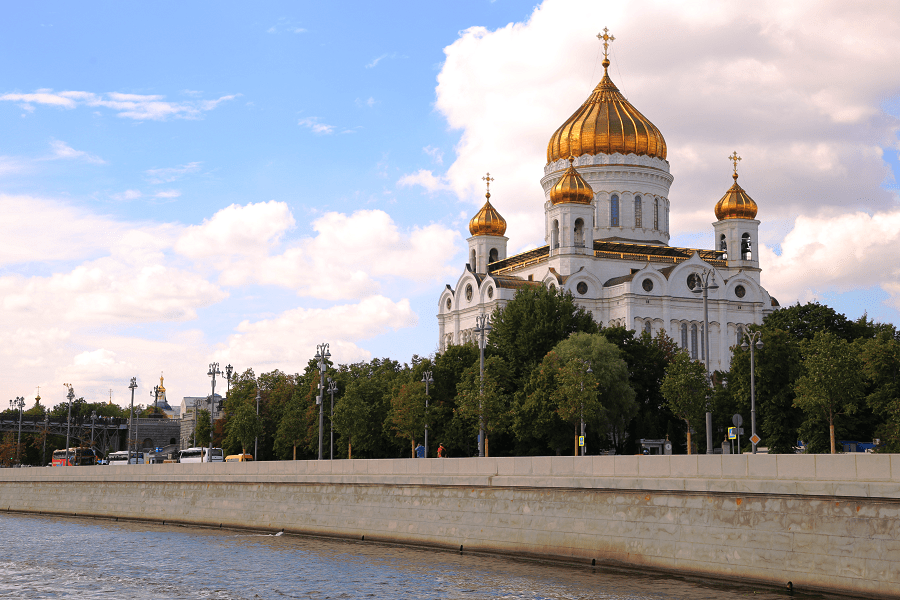