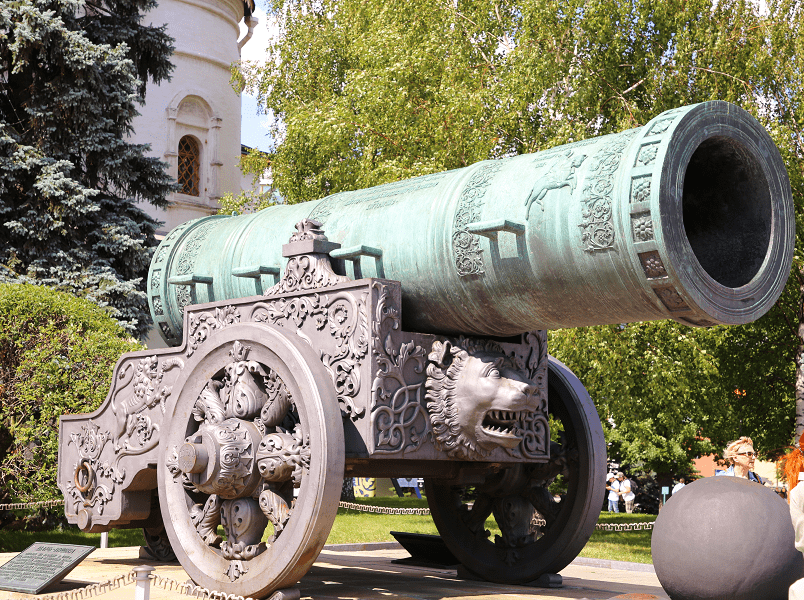 Tsar Cannon is a nominal artillery gun of the Russian Tsardom (Empire), a monument of Russian foundry art of the New Age.

A masterpiece of heavy fortress artillery of its time, the most significant work of Russian gunsmiths, and one of the largest guns in the world. The cannon was cast in 1586, and the carriage and decorative cannon balls were cast in 1859. Originally installed at the Execution Ground, at the beginning of the 18th century, it was moved to the courtyard of the Arsenal. In the 1830s, along with other cannons, it was exhibited at the facade of the Armory as a museum exhibit. Currently, it is an exhibit by the Museum of Artillery Guns of the 16th-19th centuries in the Kremlin ensemble (Moscow). 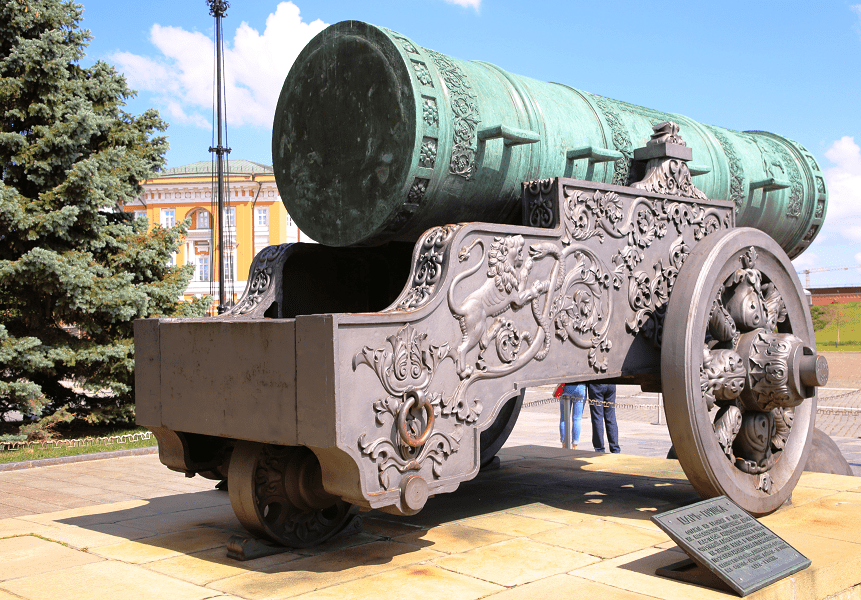 By order of Tsar Fyodor Ivanovich in 1586, master Andrei Chokhov cast Tsar Cannon from bronze. The author of the idea was the tsar’s brother-in-law Boris Godunov, who at that time ruled the state. According to one version, Tsar Cannon got its name in honor of Fyodor Ivanovich, but most researchers believe that the name is associated precisely with the size of the gun.

By order of the tsar, the cannon was installed next to the Execution Ground on Red Square to make the podium attractive when the sovereign spoke and when his decrees were read aloud. The cannon symbolized the military power of the Russian state, symbolically guarded the Pokrovsky Cathedral and the Spassky Gates and contributed to the popularity of Boris Godunov. 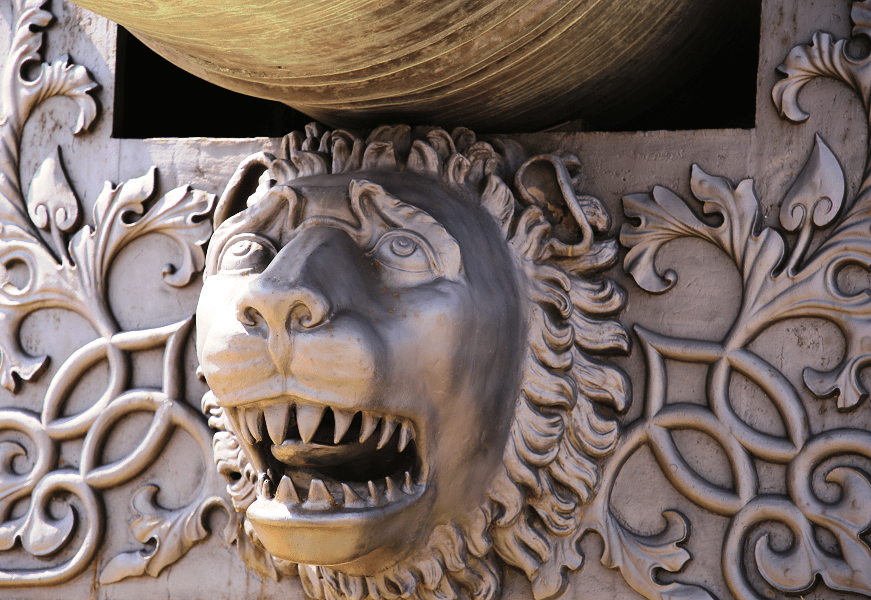 Although the cannon was cast as a full-fledged military weapon, it was never fired. The only time she was put on alert was in 1591, along with the rest of the capital’s artillery, when the troops of Kazy-Girey approached Moscow. It was installed in Kitay-Gorod to protect the main Kremlin gates and the crossing over the Moscow River.

In 1843, Tsar Cannon and several other guns were moved to the old building of the Armory, which was later converted into a barracks. It stood at this place for more than a hundred years, until the barracks were demolished in 1960 and the construction of the Kremlin Palace of Congresses began in itsplace. At this time, Tsar Cannon was transported on a truck to the northern facade of the belfry of the Ivan the Great Bell Tower, where it is still located, and on the opposite side of it stands the Tsar Bell. 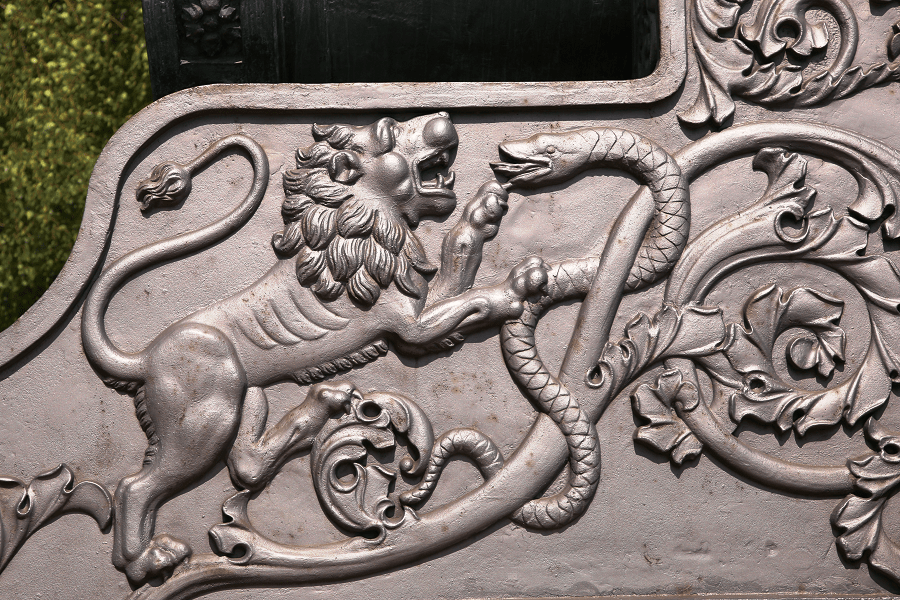 The outer diameter of the barrel is 1200 mm, the diameter of the patterned belt near the muzzle is 1340 mm, the caliber of the gun is 890 mm, and the weight is 39,312 kg. The unique dimensions do not allow the cannon to be classified as a strictly defined class of artillery pieces: the ratio of caliber to barrel length is 6, and according to the modern classification, the cannon is a mortar, but in the 17th-18th centuries, the length of the mortar barrel was no more than 3.5 calibers. Structural features make it possible to attribute it to the class of shotguns. 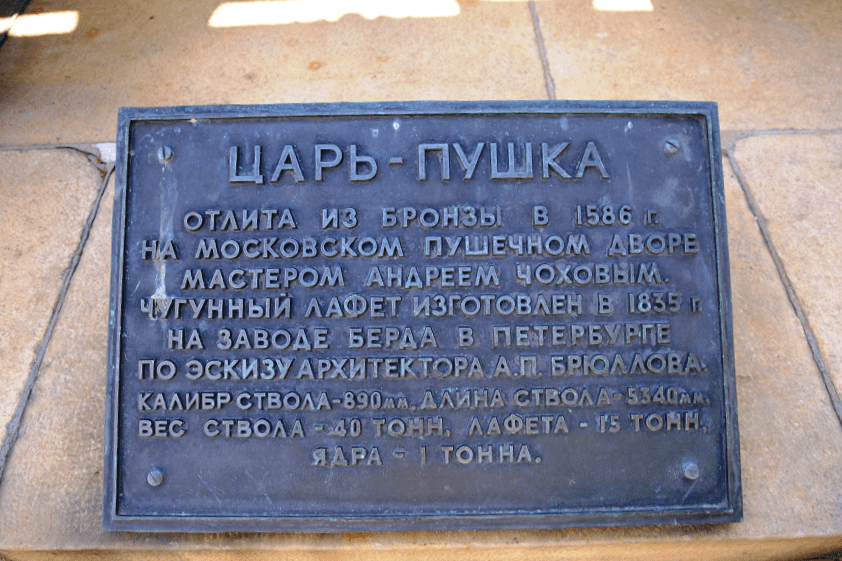 The barrel of a cannon has a canonical form, and on the front part, it is decorated with reliefs depicting Tsar Fyodor Ivanovich, sitting on a horse.

Tsar Cannon is listed in the Guinness Book of Records as the bombard with the largest caliber. Tsar Cannon remained the largest caliber gun (890 mm) in the history of artillery until the middle of the 19th century when the 914 mm (36 in) Mallet mortar was made (and even fired). In 1941, long-range railway guns “Dora” and “Gustav” of 800 mm caliber were created in Germany, surpassing Tsar Cannon in size and weight, andfired high-explosive and concrete-piercing high-explosive shells. In 1945, an experimental mortar “Little David” with a caliber of 914 mm was made in the USA. 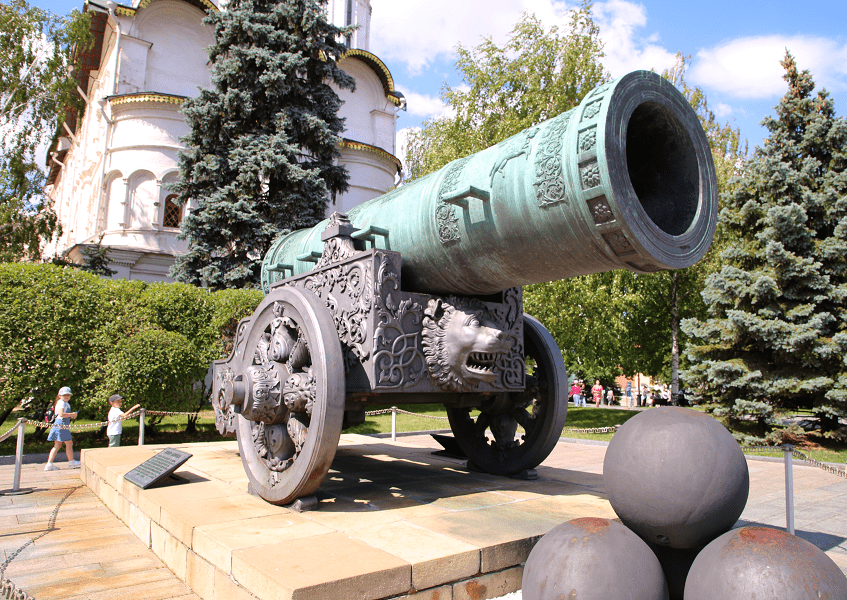