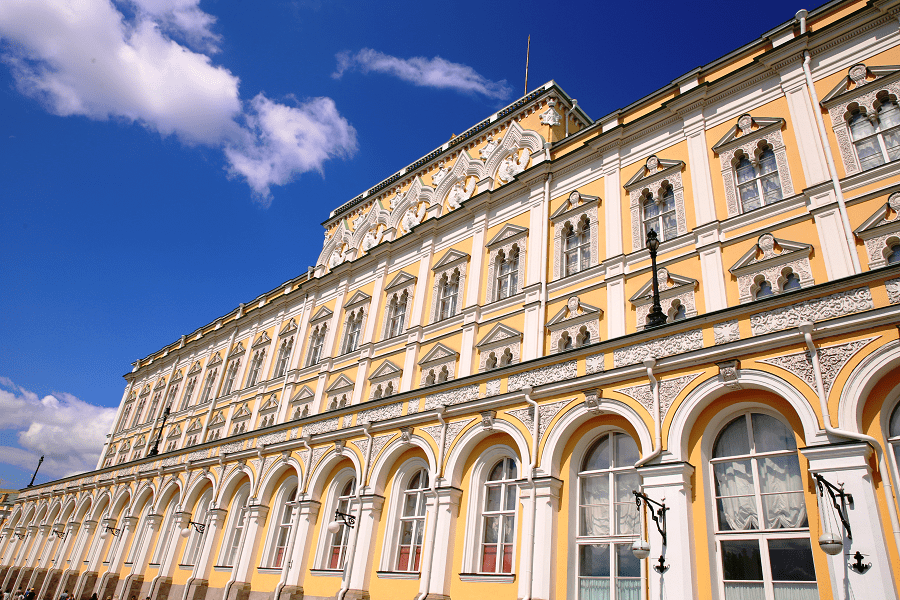 The Armoury Chamber is a Moscow treasury museum, which is part of the Grand Kremlin Palace complex. Organizationally, the museum functions as the Research and Storage Department “Armoury Chamber” of the Moscow Kremlin Museums. 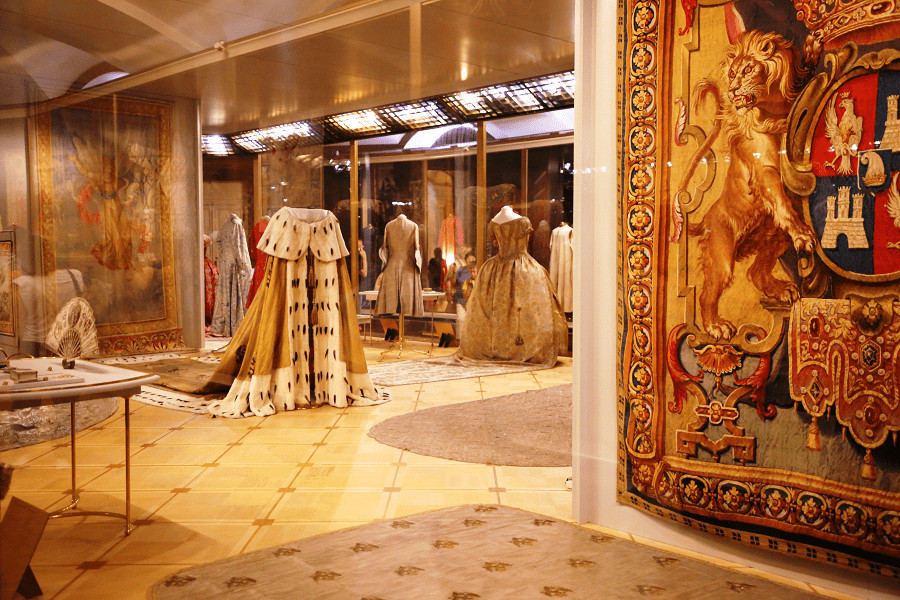 Since 1806, the treasury has functioned as a museum. The basis of the museum collection was made up of precious objects kept in the royal treasury and the patriarchal sacristy for centuries, made in the Kremlin workshops, as well as gifts received from the embassies of foreign states. 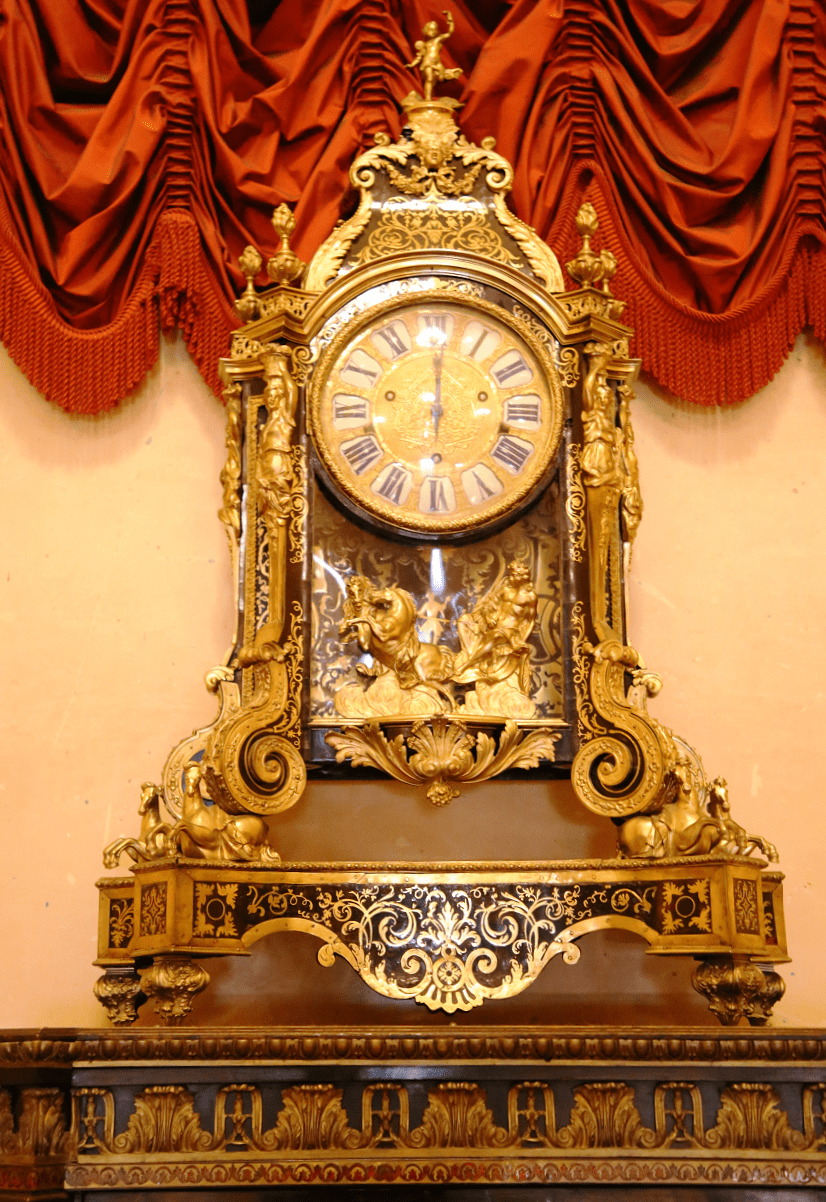 In 1851, a building in the Russian-Byzantine style was built on the territory of the Kremlin to accommodate the collection of the Armoury Chamber. Since 1960, the Armoury has been part of the State Museums of the Moscow Kremlin. 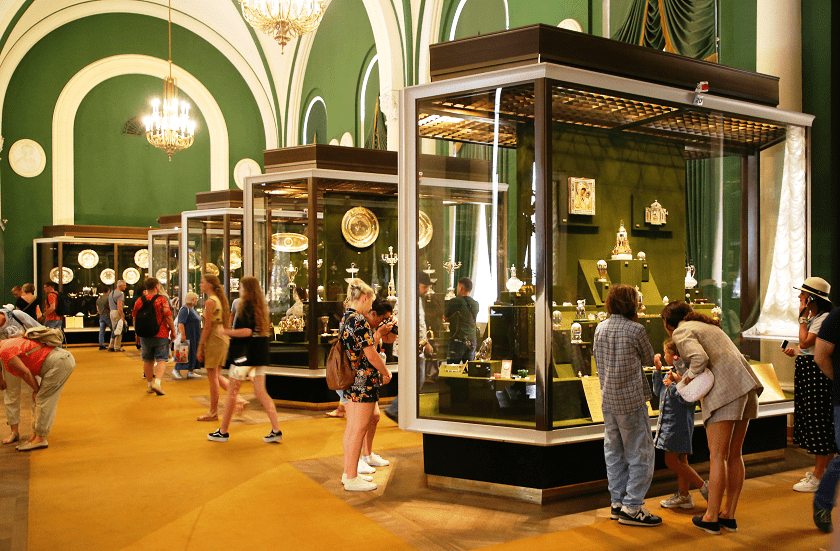 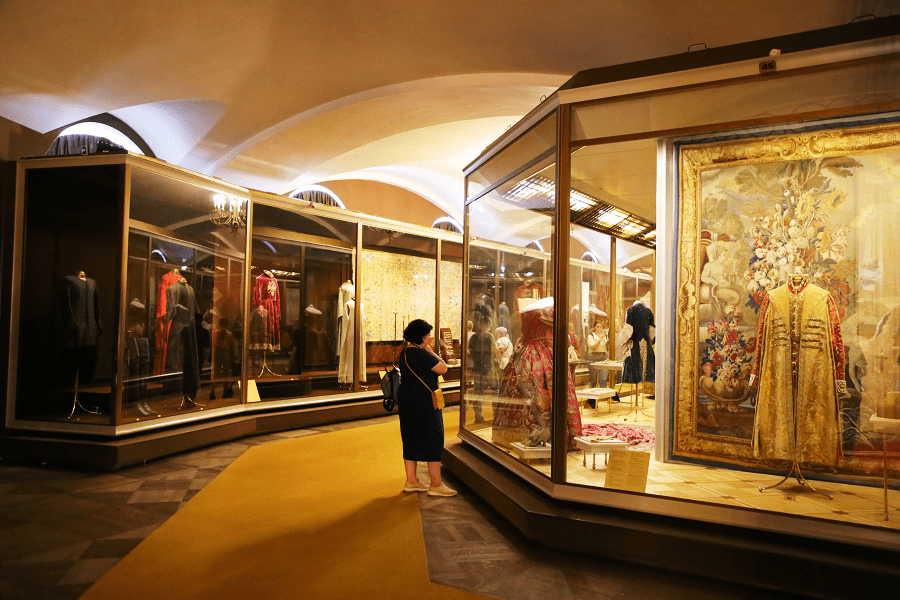 The collection of the Armory began to take shape as early as the 14th century as a private treasury of the great Moscow princes and tsars. As the Russian state expanded its territories, the treasury also increased: by 1484, to store objects, a separate building was built with a pyramidal roof between the Archangel and Annunciation Cathedrals. 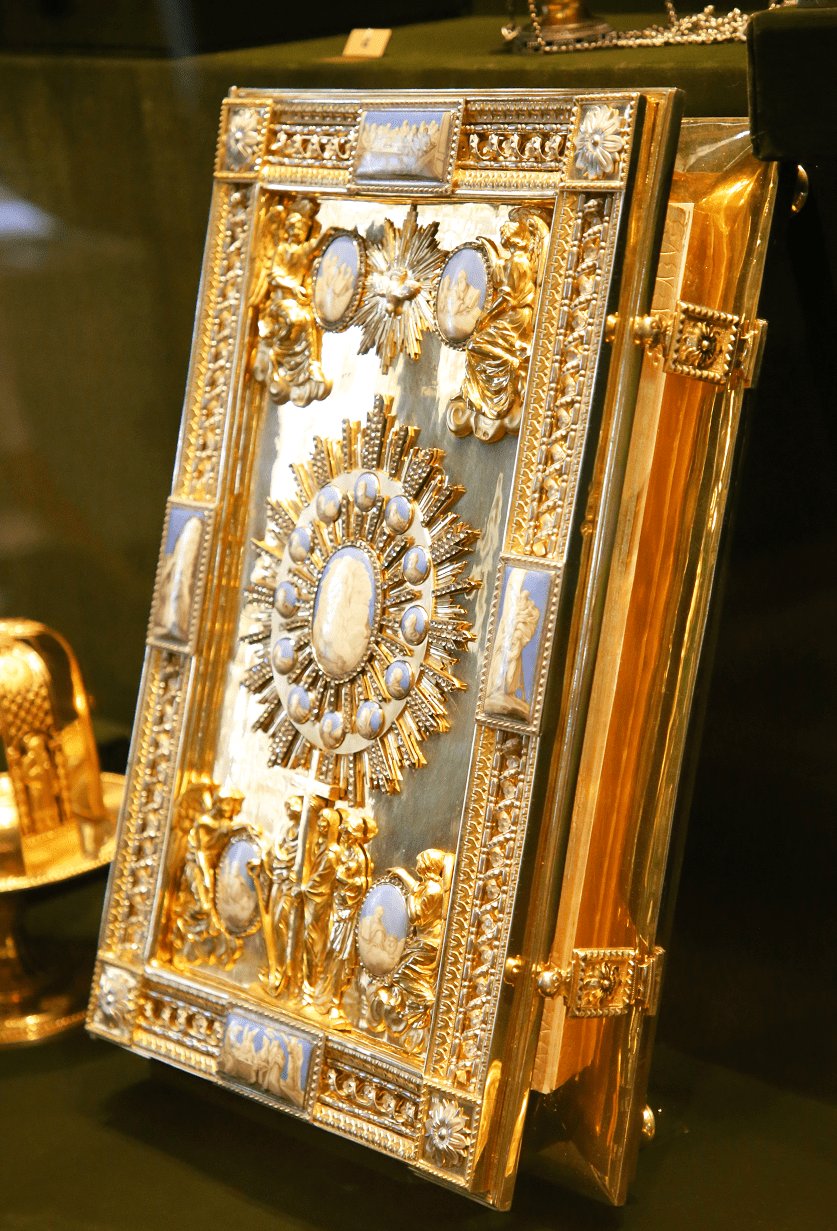 From the same year, the institution began to be called the Treasury Yard: all the treasures of the Moscow princes and the gold reserves of the Moscow Kremlin cathedrals were transported here. The treasury also lost the status of personal property and began to function as an official state repository. 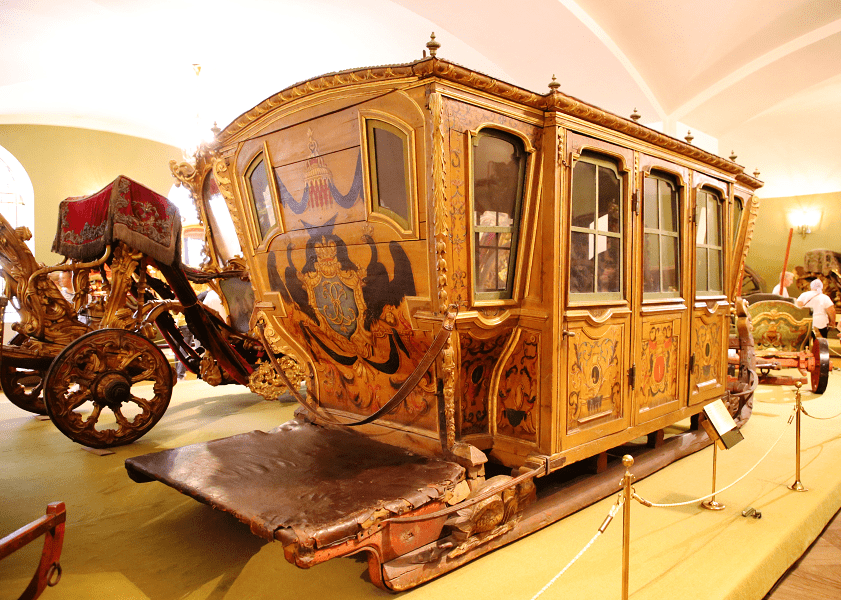 In the 15th-18th centuries, objects from the repository were often used at state events: royal weddings, embassy receptions and royal funerals, and were often given to foreign rulers. At the same time, there was a constant replenishment of the treasury due to the expansion of territories – valuables were brought from the annexed cities and principalities – and due to the property of disgraced boyars and gifts received from foreign ambassadors and patriarchs. 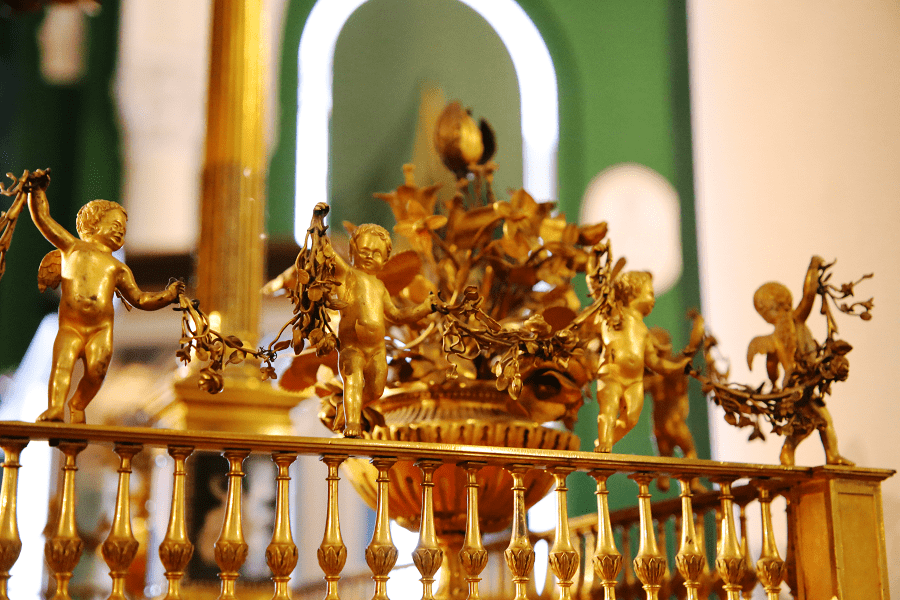 The Armory was first appointed as a special repository of weapons from the rest of the Sovereign Treasury in 1508 when Grand Duke Vasily III established the special rank of a gunsmith. 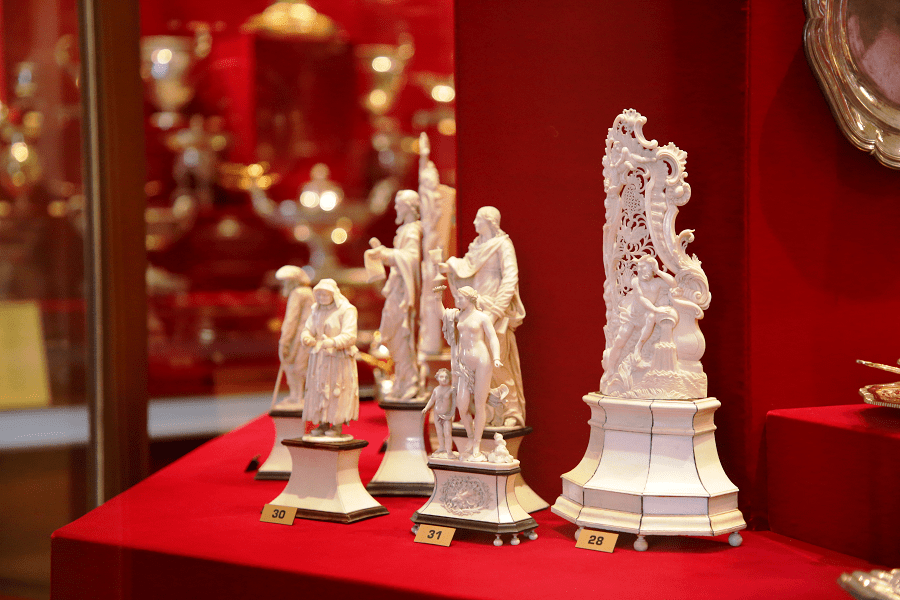 Another source of replenishment of the treasury was the workshops of the Moscow Kremlin, which existed at the royal court. The workshops were called “chambers” and were located in stone rooms. The armory was located in a three-story building next to the Trinity Gate and occupied the top two floors. The first mention of it refers to 1547 when one of the chroniclers described the wedding of Ivan the Terrible and the Moscow fire of 1547.

Painters worked alongside the armor masters, including Simon Ushakov, Fyodor Zubov, Bogdan Saltanov, Ivan Bezmin, and Vasily Poznansky. Their task was to paint the royal mansions, the Kremlin’s cathedrals, and icons. 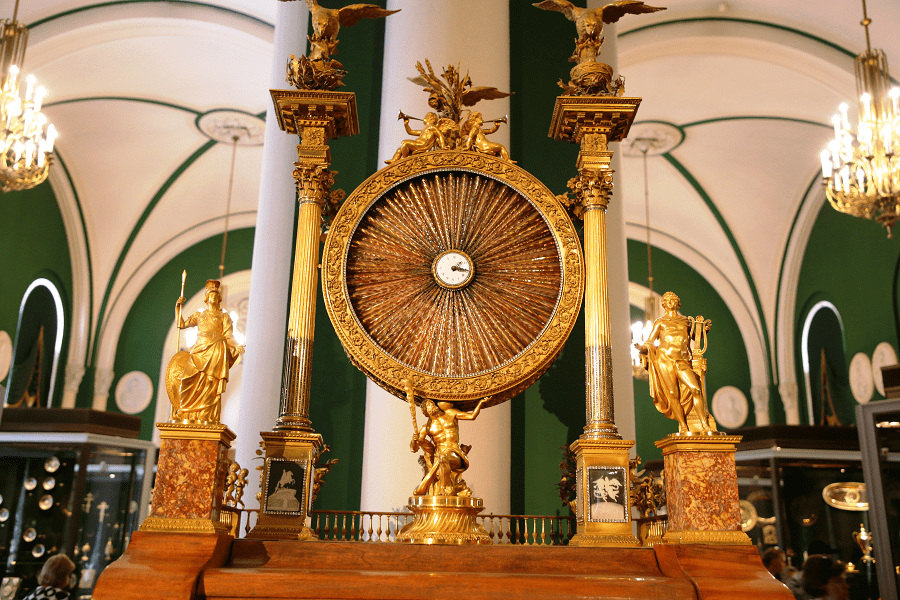 The heyday of the Armoury came at the beginning and middle of the 17th century, when, because of the centralization of the Russian state, many craftsmen from Novgorod, Vladimir, Suzdal, Murom, Kazan, Veliky Ustyug were brought to Moscow. Moreover, thanks to the policy of Alexei Romanov, the army was reorganized in a European way, which made it possible to improve the production of weapons. 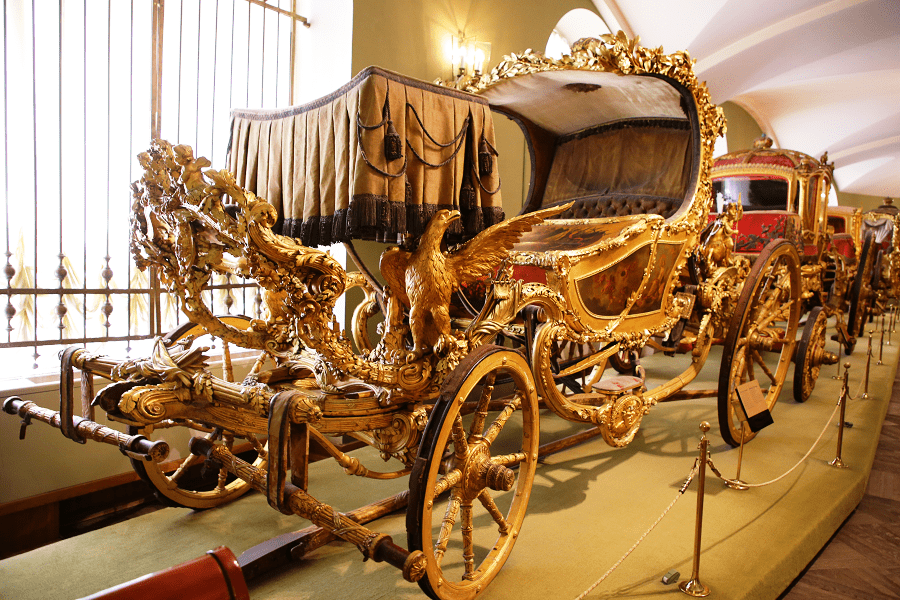 The employees of the Armoury also provided armaments for the armed forces and concluded deals for the supply of armaments to Russia. Thanks to the constantly updated base of workers, a variety of ornaments and shapes distinguished the objects produced. 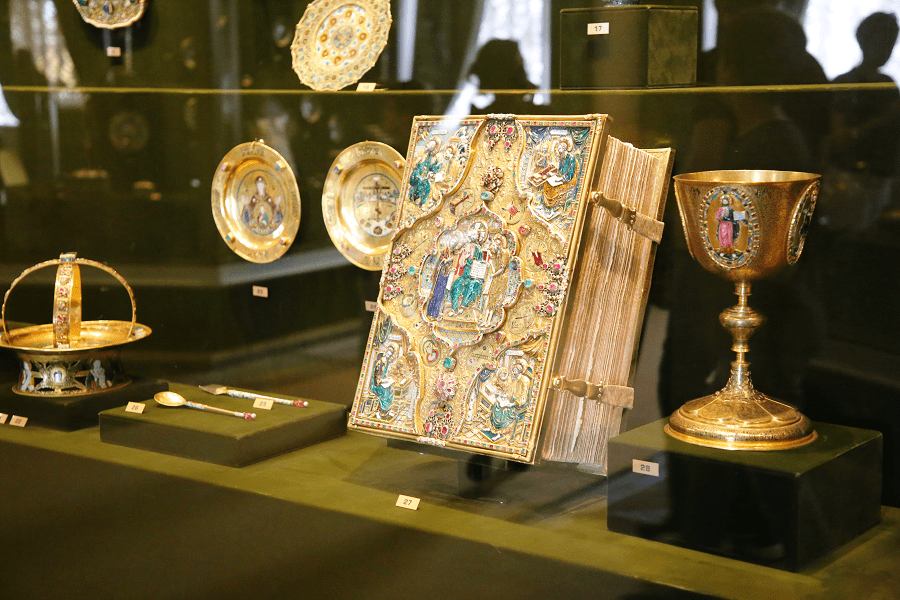 In 1806, Alexander I issued a decree on the formation of a palace imperial museum based on the collection of the Armoury and the construction of a building on Senate Square to transfer the collection to it. The project was prepared and implemented by the architect Ivan Egotov in 1807. 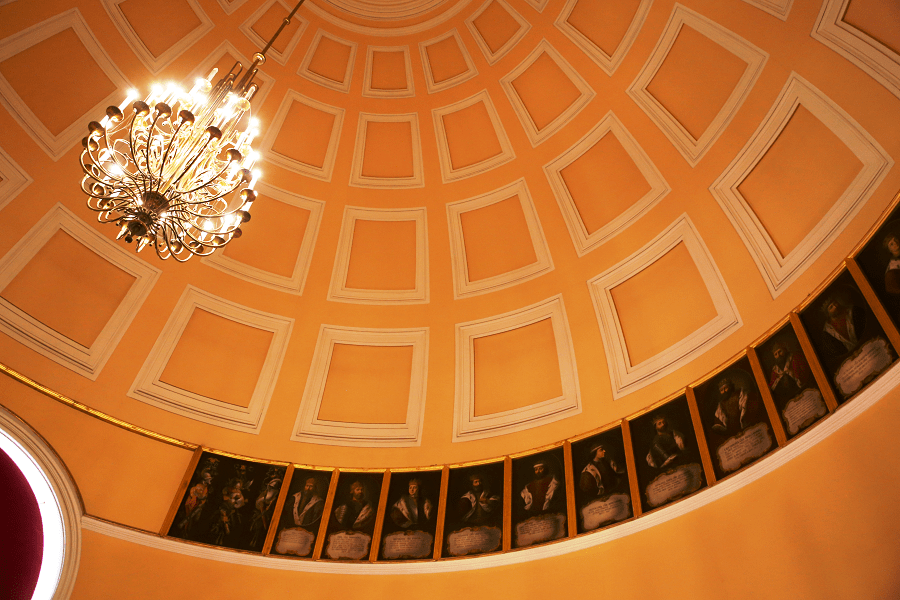 The building was located on the site of the former chambers of Boris Godunov. However, due to the laid masonry and the increased risk of fire, the heating system was not installed in the house. This negatively affected the safety of things: due to high humidity, many items deteriorated from dampness and cold. 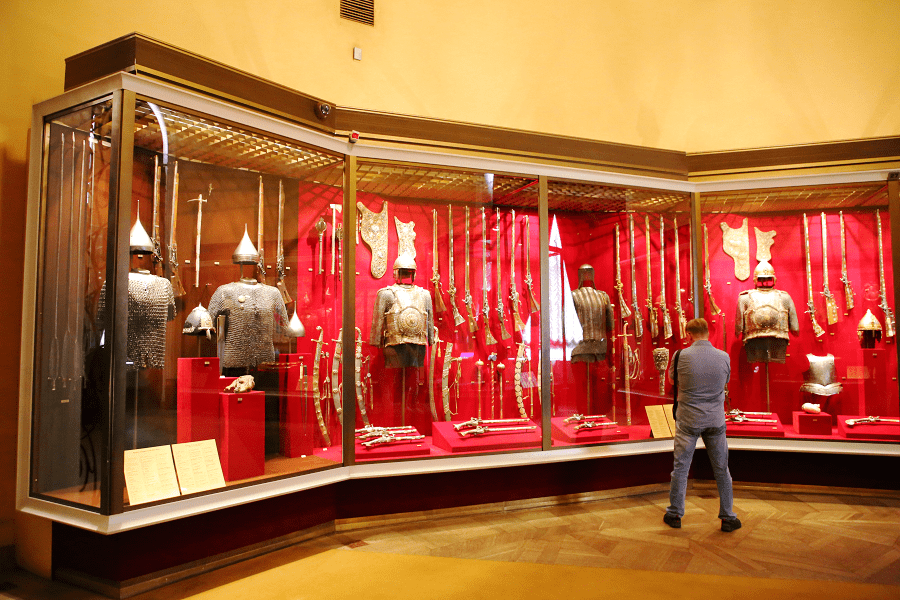 The exposition was open to the public in 1813-1814, but only for representatives of the nobility and merchant circles. 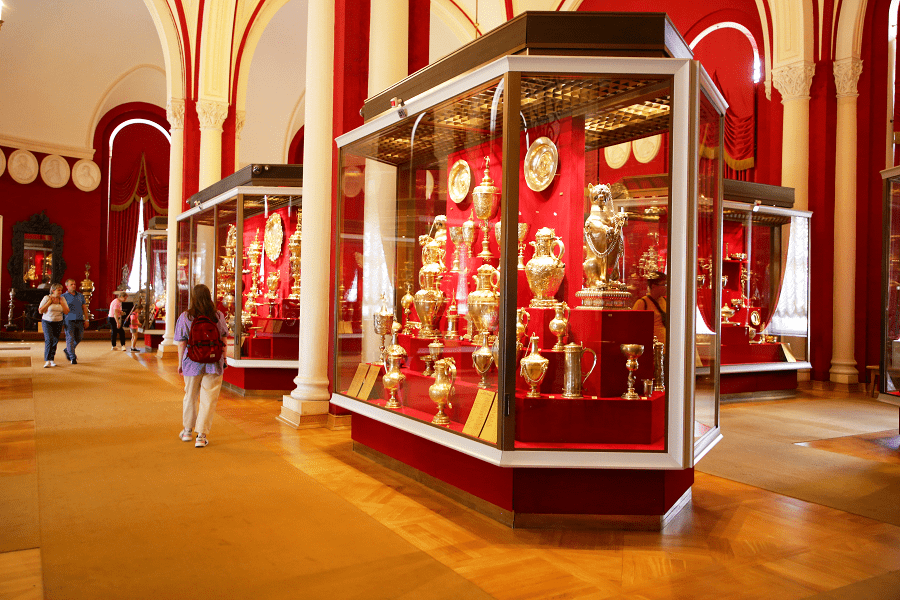 To preserve the collection of the Armoury, in 1849 the government commissioned the architect Konstantin Ton to design a new building on the territory of the Kremlin, suitable for the needs of the treasury. 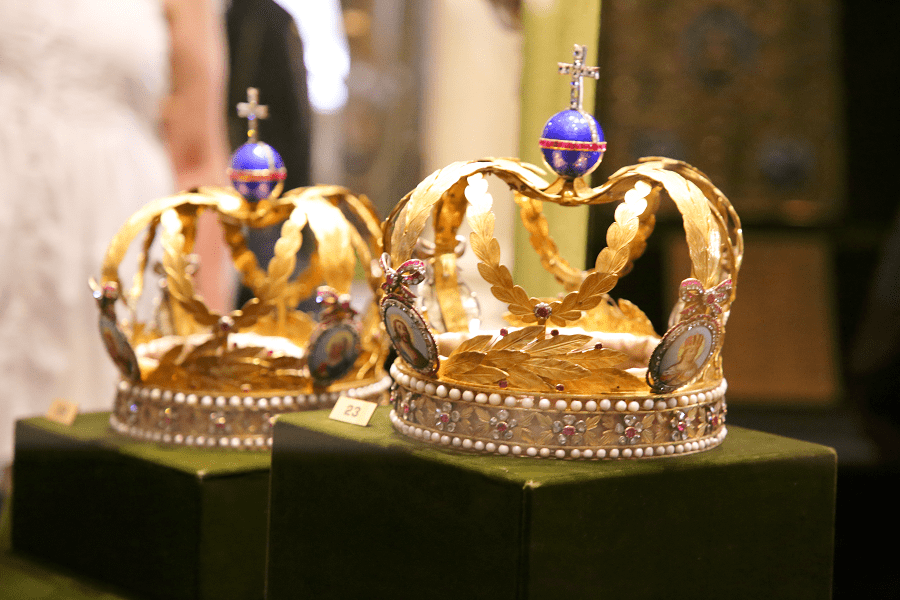 In 1849, the Moscow Palace Office began the construction of a new building of the Armoury on the site of the former Stable Office.

The lead architect of the building was Konstantin Ton; architects Nikolai Chichagov and Vladimir Bakarev and assistants Pyotr Gerasimov, Mikhail Trubnikov and Ivan Gorsky were engaged in the development of interiors and individual details of the building. The building was designed in 1851 in the Russian-Byzantine style as part of the Grand Kremlin Palace complex. 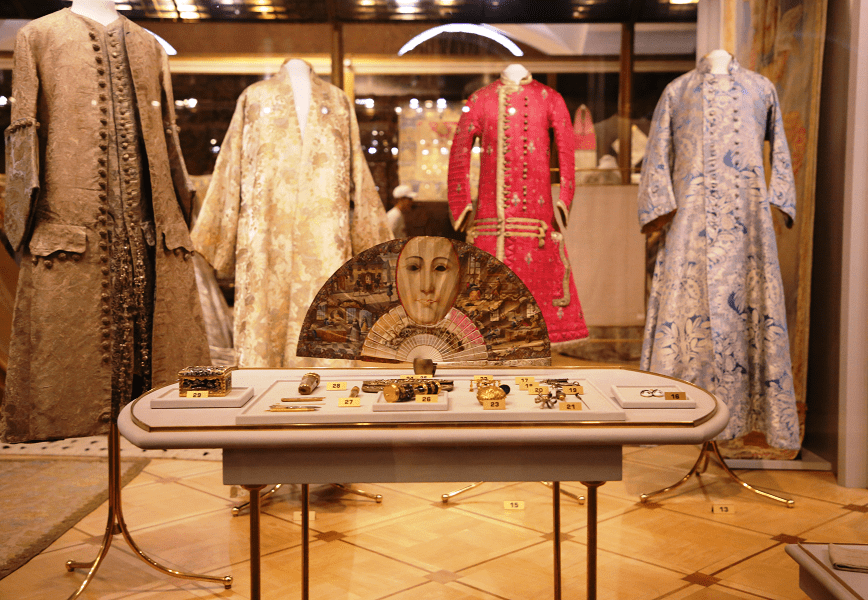 The house was placed on a high plinth and its external outline repeats the outlines of the Stable Order. The upper floor of the Armoury is decorated in the spirit of the architecture of the late 17th century with carved white stone columns and window casings with hanging weights; the lower floor is decorated with pilasters. 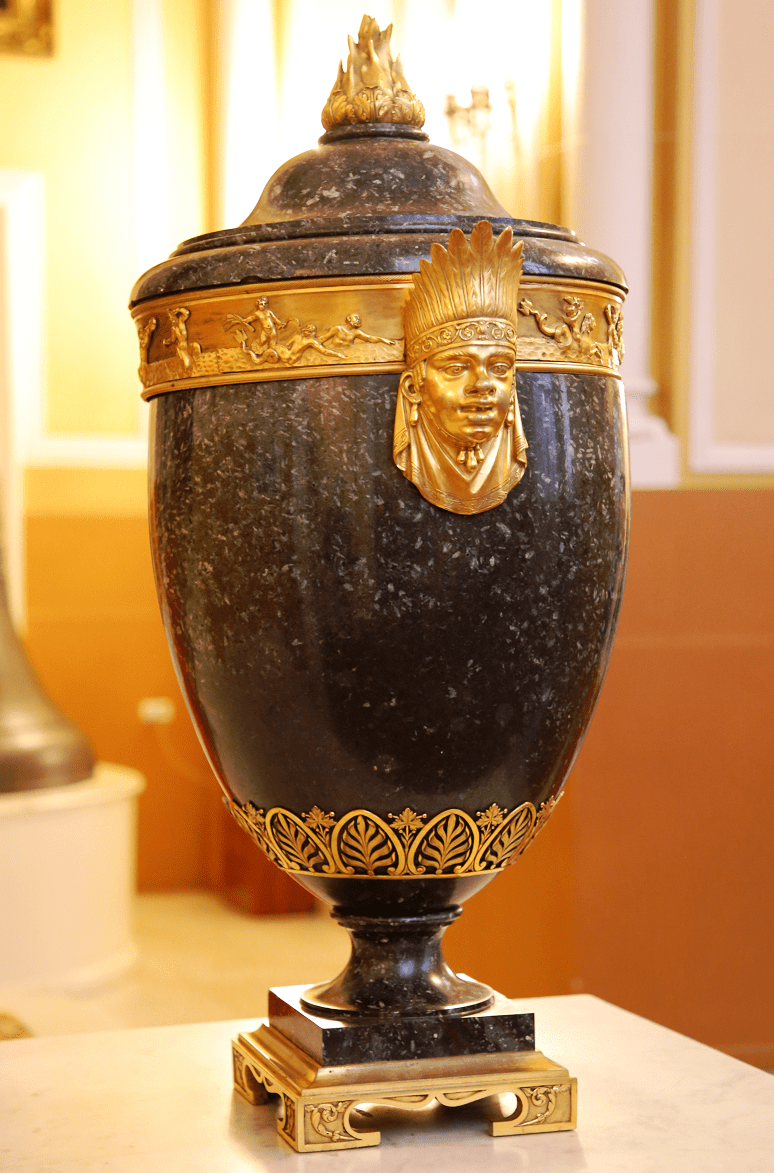 Between 1774 and 1775,the sculptor Fedot Shubin decorated the walls of the building with marble medallions featuring images of Russian princes and tsars, which he made for the Chesme Palace. The cast iron grate between the Armoury and the Grand Kremlin Palace, which Ivan Mironovsky designed, was installed in the 1840s. 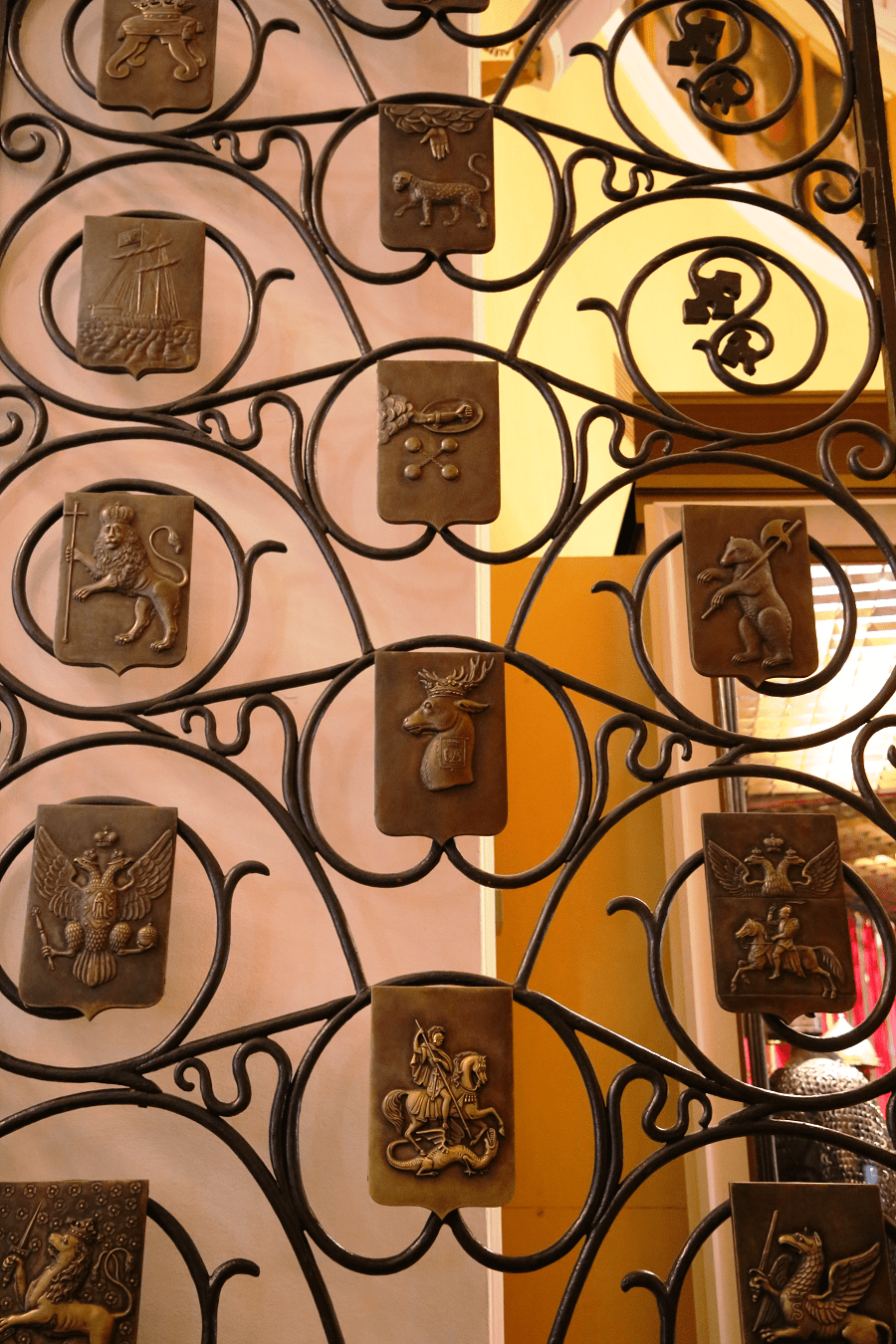 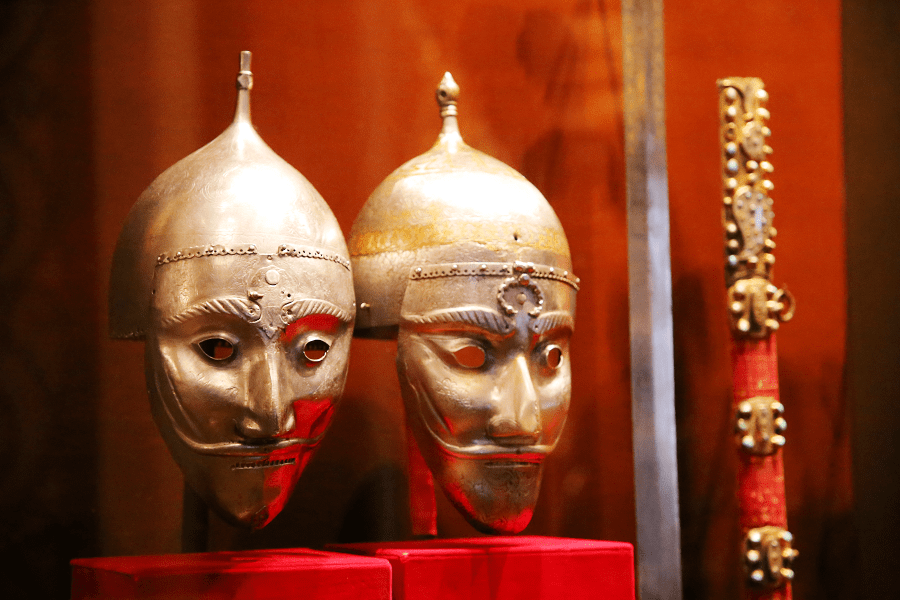 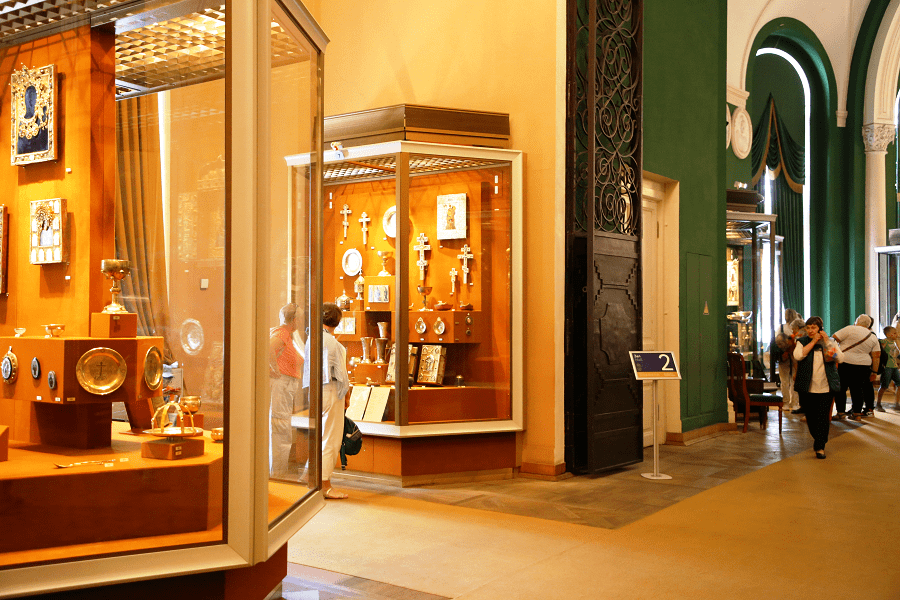 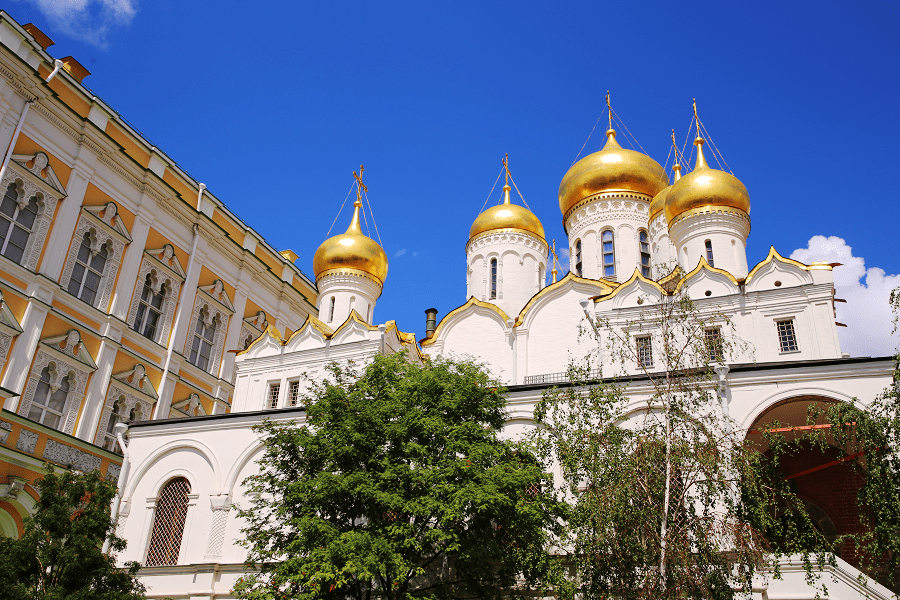