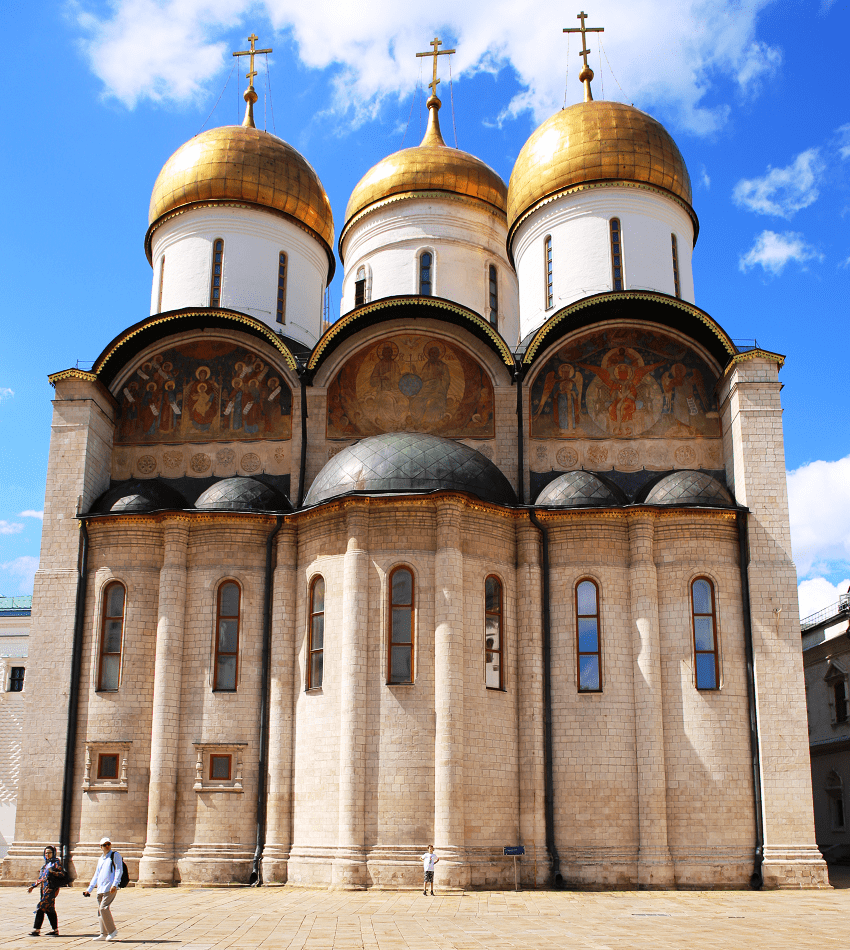 The cathedral is the oldest fully preserved building in Moscow, as well as the earliest of the Italian structures in the Kremlin. It was built in 1475-1479 under the direction of the Italian architect Aristotele Fioravanti.

It was the main cathedral of Russia until 1917. It is the tomb of all the Moscow patriarchs of the first patriarchal period, except for Nikon and Ignatius.

The first Assumption Cathedral in Moscow was founded on August 4, 1326, under Ivan Kalita, and consecrated on August 14, 1327. The Metropolitan of Kiev and All Rus’ Peter, who transferred his throne from Vladimir to Moscow founded it. Initially, it was a single-domed white-stone three-apse temple, crowned with kokoshniks, to which side chapels were later added. In style, it resembled the Vladimir-Suzdal buildings of the early 13th century, in particular the St. George’s Cathedral in Yuryev-Polsky. The temple was built in the technique characteristic of that time: masonry of roughly processed squares of white stone was combined with smooth-hewn elements of architectural decoration. The icon of the Mother of God Hodegetria, brought from Byzantium, was kept in the cathedral. 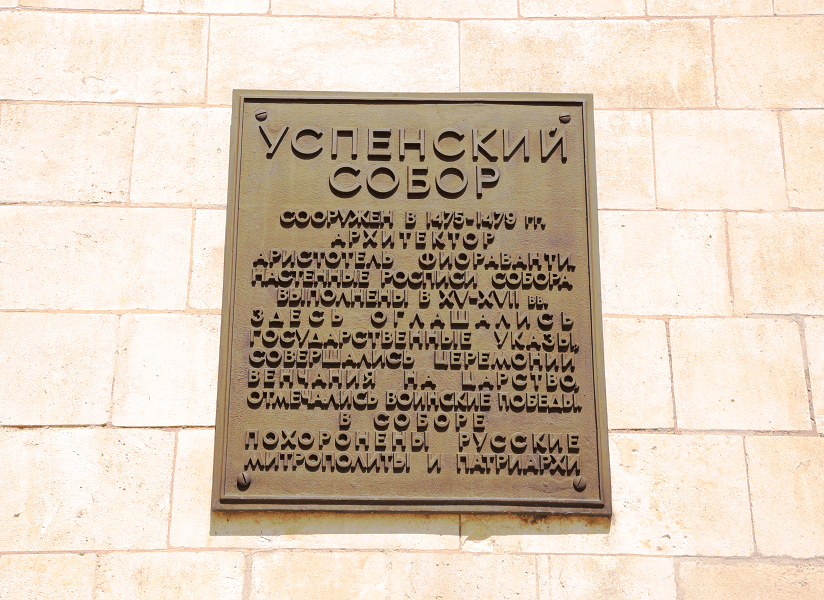 During a major fire in 1470 that raged in the Kremlin, the northern aisle of the temple collapsed.

Metropolitan of All Rus’ Philip functioned as the initiator of the renovation of the cathedral. The reason for the restructuring was also the change in the status of Moscow, which became the political and spiritual center of the Russian state. To raise funds, all monasteries were taxed, and the laity and clergy were asked for donations. The project was entrusted to the masters Krivtsov and Myshkin, Vladimir Grigoryevich and Ivan Vladimirovich Khovrin, as well as Vasily Yermolin, who supervised the work. Under Ivan III in 1472, a solemn ceremony of laying the foundation stone of the temple took place. As a model of construction, the Assumption Cathedral in Vladimir was chosen. A temporary wooden church was built inside the building, in which Ivan III married Sophia Paleolog.

The construction that had begun was not completed: the temple, erected to the vaults, collapsed after the earthquake that occurred in Moscow on May 20, 1474. 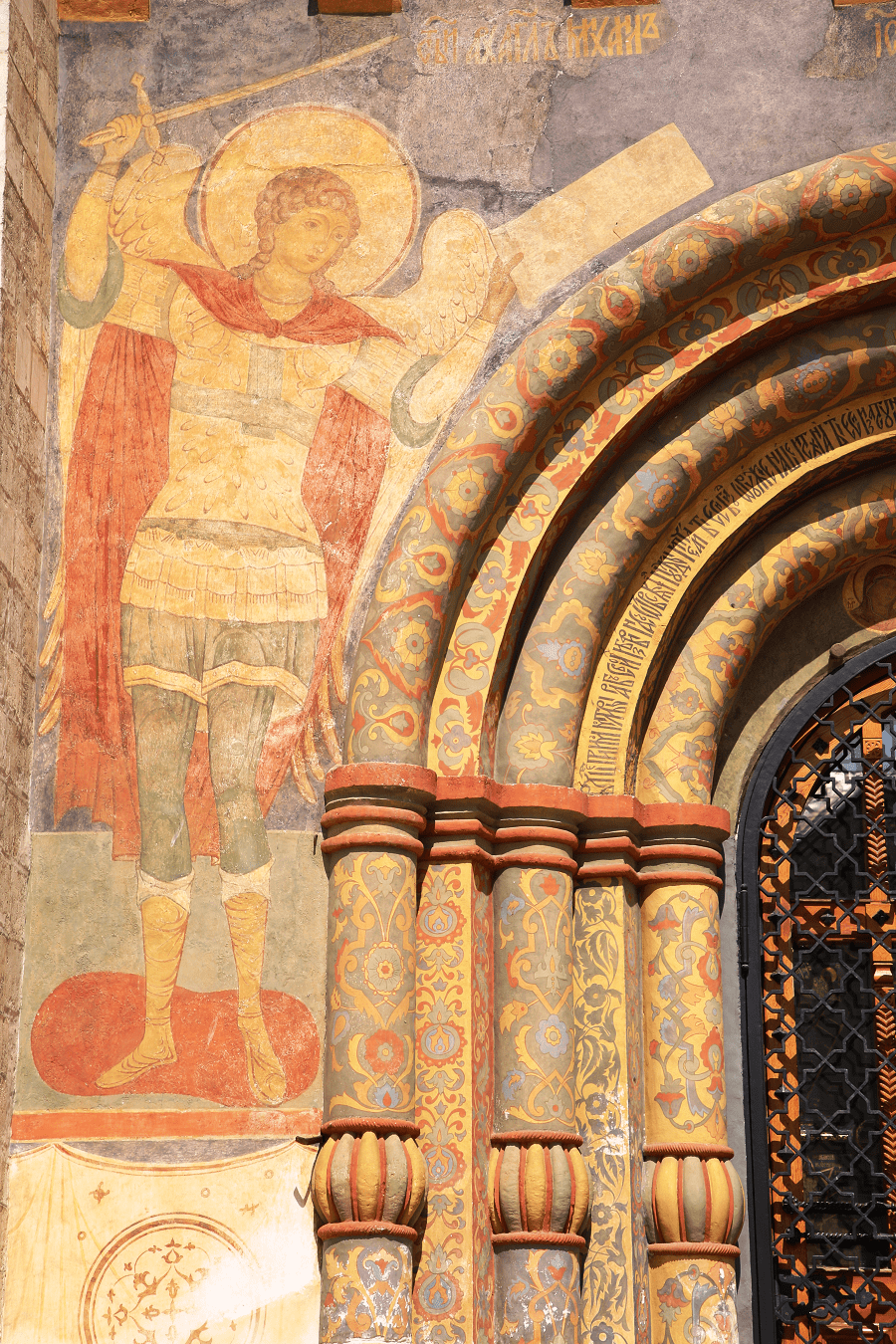 To complete the construction, the Italian architect Aristotele Fioravanti was invited to Moscow. According to his project, the cathedral was erected from hewn blocks of white stone and brick. Iron piles were installed to strengthen the walls. The facades were divided into vertical ledges. In the southeastern part, two aisles called Dmitrievsky and Pokhvalsky were arranged with a low wall separating them. Metropolitan Gerontius consecrated the temple on August 12, 1479. In 1481, the icon painter Dionysius and his disciples painted the cathedral. At the same time, a three-tiered iconostasis was built and the temple was completely painted by 1514-1515.

The Trinity fire of 1737 damaged the frescoes of the cathedral and the integrity of the walls. Repair work was conducted during the reign of Elizabeth Petrovna under the guidance of architect Ivan Michurin. The restoration of the murals began in 1767. In 1775, by order of Prince Grigory Potemkin, icons from the Armory were transferred to iconostases near the northern and southern walls of the cathedral.

During the French occupation of Moscow in 1812, the Vladimir Icon of the Mother of God, the robe of the Lord, the Korsun crosses and other valuables were taken out of the cathedral. 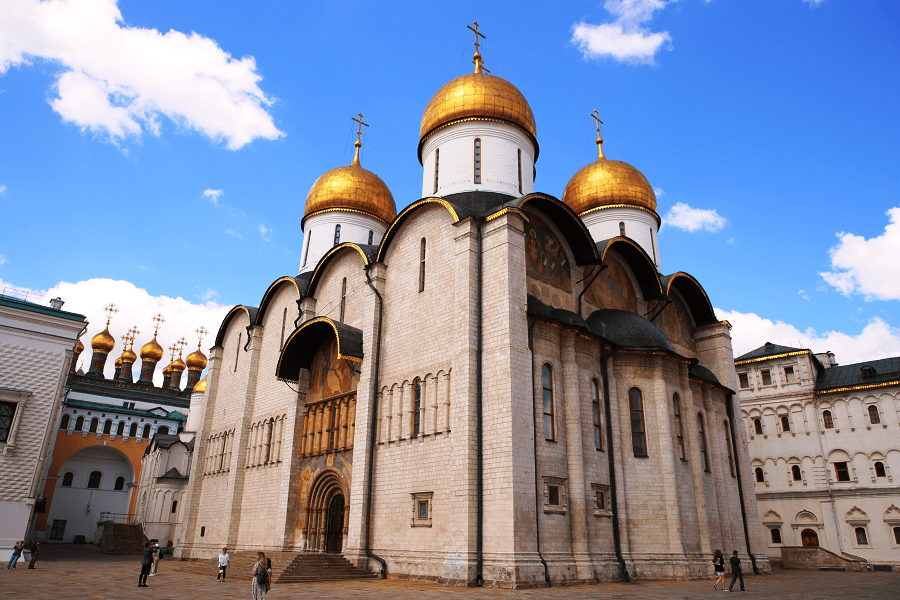 Once again, the cathedral was restored in 1896 before the coronation of Nicholas II.The icon painters were Grigory Chirikov and Mikhail Mikhailovich Dikarev, and the architect Sergei Rodionov supervised the work. During the restoration, frescoes from the middle of the 17th century were uncovered, icons were restored and ceilings over the apses were replaced. The windows in the arched belt were reduced to the size of the upper ones and decorated with semicircular lintels.

According to the work done at the end of the 19th century, it was decided to conduct a complete disclosure of ancient paintings. In 1910, a commission was created to monitor the work. As a result of the work, the restorers completed the plots, the backgrounds of the images were gilded and the painting with poppy drying oil was strengthened.

The next restoration work in the temple began shortly after the Great Patriotic War. Icons of the 14th century were cleared: “The Mother of God Hodegetria”, “The Apostles Peter and Paul”, “Trinity” and “Praise of the Mother of God with an akathist”. In the summer of 1955, the cathedral was opened to the public as a museum, and in February 1960 it was transferred to the Ministry of Culture of the USSR. 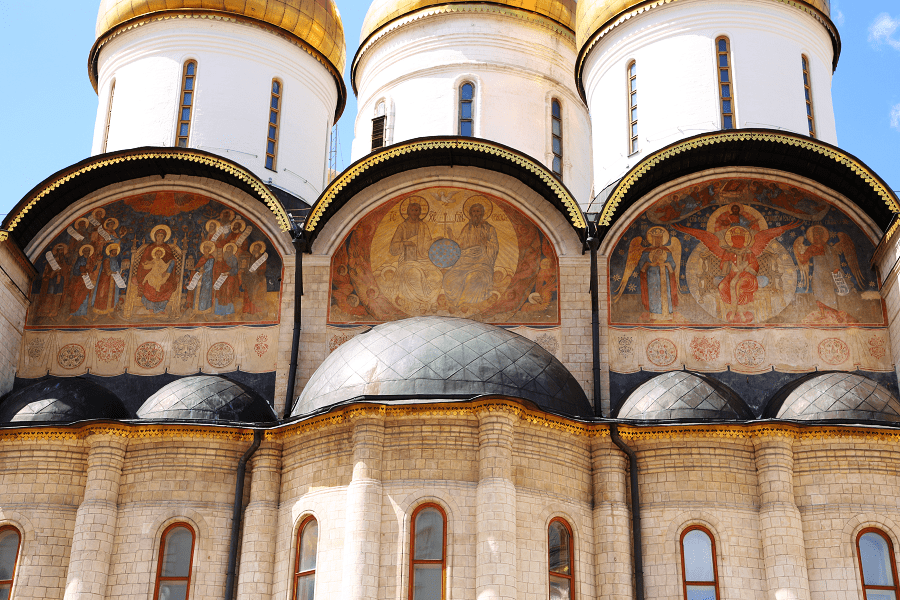 Dormition Cathedral is a tremendous six-pillared building with five apses and five domes. It was modeled after the Assumption Cathedral in Vladimir, made extensive use of limestone masonry on a high limestone base and was laid out as a three-nave church with a vaulted cross-dome. It is built of well-trimmed white-stone blocks. However, Fioravanti did not use cantilever vaults as was common in Russian architecture but introduced groin vaults and transverse arches. For the upper part of the building, he used specially made bricks that were larger than the standard Russian size, which reduced weight and allowed for more slender arch supports. Thus, the easternmost pair of columns in front of the apses are typically Russian in the use of massive rectangular open piers, while the remaining four are simpler Corinthian columns. The slim shape of these columns contributes significantly to the light, spacious effect of the interior.

Inside, the church fresco painting dominates its decoration. The huge iconostasis dates from 1547, but its two highest tiers are later additions from 1626 and 1653/1654 under Patriarch Nikon. In addition to its liturgical function, the iconostasis also served as a sort of trophy wall, in that Russian Tsars would add the most important icons from cities they had conquered to their collection. One of the oldest icons with the bust of Saint George dates from the 12th century; Tsar Ivan IV transferred it to Moscow on the conquest of the city of Veliky Novgorod in 1561. 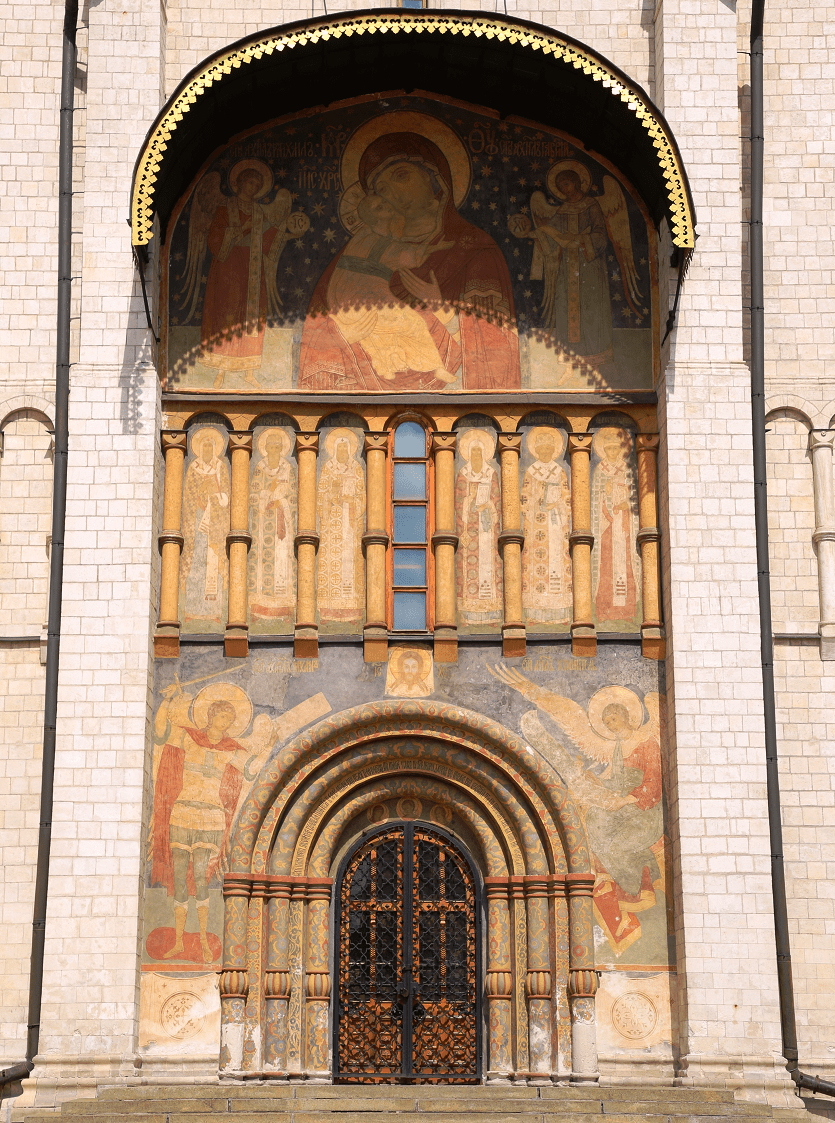 However, one of the most important icons of the Russian Orthodox Church, the Theotokos of Vladimir kept at the cathedral from 1395 to 1919 is now in the Tretyakov Gallery.