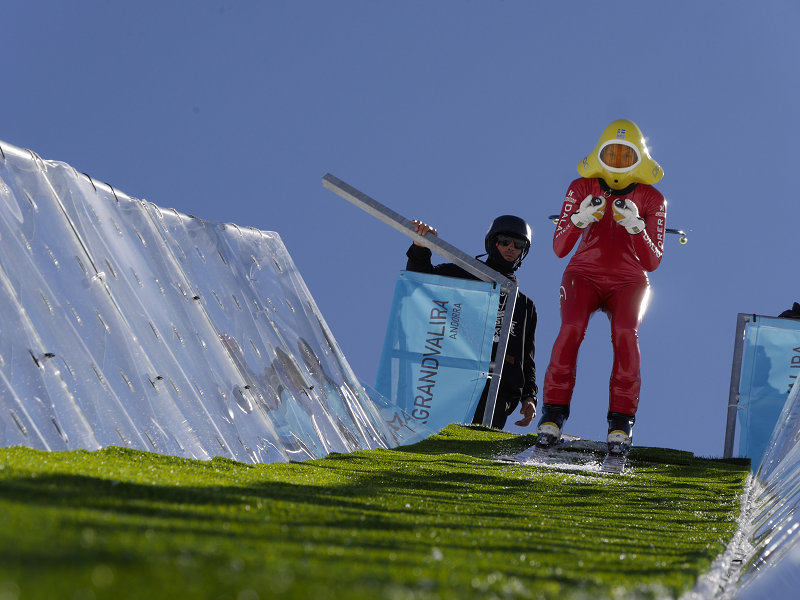 1. Andorra is the sunniest ski resort in Europe, which gives it many great advantages over the Alpine resorts, where cloudiness prevails during the entire ski season. The ski season here starts on December 1 and lasts until mid-April, as in the resorts of France, Germany, Austria, Italy and Switzerland.

At night, in winter, the air temperature is usually below zero, and during the day it rises to + 10C, the snow depth varies from 50 to 300 cm. The Andorran winter feature is that there is snow in the mountains, and below, for example, in the capital Andorra La Vella ( 10 minutes from the ski resorts) at this time flowers bloom.

2. Andorra has the largest territory of ski slopes in the Pyrenees (3100 hectares and about 350 km of slopes) and two ski resorts. Resorts are located in the territories called GRANDVALIRA (Grandvalira) and VALLNORD (Vallnord). Andorra also has a cross-country skiing station called NATURLANDA – la Rabassa (Naturlandia).

According to the World Ski Awards, resorts in Andorra were in the TOP 15 world resorts in the world which are able to accept more than 1 million skiers annually.

Together, the ski resorts of Grandvalira and Vallnord have the highest percentage of ski lift systems per square meter in the world with a capacity of about 160 thousand people per hour.

3. Andorra is one of the safest countries for tourists.

A limited number of open ski slopes led to large concentrations of people near the ski lifts and triggered an increase in accidents. The problem recurred in February – due to the high daytime temperatures and the lack of snow, most ski slopes again became bare. Snow cannons do not work on all the slopes.

Thus, planning a trip to Andorra in advance could lead to coming across bad skiing conditions.

2. The Principality does not have its own airport or railway station and you can only get to Andorra by bus or private transport. This means that, for example, from London, taking into account a two-hour flight, waiting for a bus and a four-hour journey to Andorra, takes a whole day.

At the same time, the price of a bus from Barcelona to Andorra is much higher compared to similar destinations within Europe due to the monopoly the Principality has on these routes. The price for a one-way ticket is almost 35 euros for 200 km, and, for example, the fares of the Spanish Alsa company to travel from Barcelona to Madrid (more than 600 km) is only 16 euros.

Andorra has faced a transport crisis in recent years. Only two roads connect it with the rest of the world: N145 leads from Spain and N22 from France. The road from France is a “serpentine”, it has not been modernized for many years, and therefore it is often blocked in winter even when there has only been a few centimetres of snow because of the danger of avalanches. Therefore, the French themselves often prefer to get to Andorra via Spain on the N145.

The increased number of day tourists to Andorra for cheap tobacco and alcohol provokes many kilometers of traffic jams at both borders. During the 2019-2020 season, about 15 serious traffic jams were recorded, some of which stretched out for almost 15 km and led to many hours of downtime at the border. As a result, hundreds of tourists were late for flights from Barcelona airport and local residents complained about the contamination levels due to the increase in the amount of harmful emissions into the atmosphere.

For example, getting to the ski resorts Masella and La Molina (nearest to Barcelona) is only 2 hours by bus, car or train. At the same time, tourists are unlikely to come across traffic jams, since they do not need to cross the border.

Transport inside Andorra is also not to be shouted about. The Skibus only goes to one ski resort – Vallnord (Pal-Arinsal and Ordino-Arcalis) and only three times a day. Along the ski slopes of Grandvalira, there are only regular buses that run at a cost of at least 2 euros (even if you only need to go one stop). At the same time, during the opening and closing hours of the lifts, the number of buses does not increase, they are often overcrowded, which leads to an accumulation of tourists at bus stops waiting for the next bus with empty seats.

There are no electronic boards with information about routes or delays at bus stops. Information about transport is available only via the Internet, however, there is no free wi-fi at the bus stations.

3. Five years ago, prices for ski passes in Andorra were relatively lower than, for example, in the Alps, but now the prices are more or less the same. At the same time, Andorra cannot compete with the ski resorts of the Alps due to the limited number of tracks (about 350 km).

4. Night skiing has not been developed at the Andorran resorts. However, in Masella it has become a major attraction.

In Andorra, there is no nightlife or entertainment events even at the major ski stations. The only après-ski bar in the country closes at 21.00.

5. Shopping in Andorra, which was previously a mandatory part of the tourism program and its great advantage over the Alps has lost its attractiveness in recent years.

Currently, Andorra maintains competitive prices only for tobacco, alcohol, perfume and cosmetics. At the same time, the limits on the export of goods from Andorra are very strict (for example, no more than 1 litre of strong alcohol can be taken across the border).

6. The classification of hotels in Andorra is subject only to its internal rules. In Andorra, the criteria for stars in hotels are overestimated by one to two stars compared with the European system.

In addition, in Andorra, there are practically no five-star hotels near the lifts. The main standard of hotels in Andorra is of two or three stars.

7. Restaurant infrastructure: in Andorra, it is difficult to find many traditional, family restaurants located along the slopes like in the Alps. In the Principality, there are mainly only self-service restaurants with typical dishes available.

In addition, the high cost of supermarket products is the reason for overpricing in restaurants with a low quality of service.

There are no Michelin star restaurants in Andorra.

During the ski season of 2003/2004 Grandvalira Pas de la Casa – Grau Roig and Soldeu – El Tarter resorts signed a commercial agreement to launch a unified ski zone “Grandvalira”. Thus, besides the fact that Andorra has got the largest skiing area in the Pyrenees, it is also one of the principal ski resorts in Southern Europe.

Mountain ski resort of Grandvalira is divided into 6 sectors: Pas de la Casa, Grau Roig, Soldeu, El Tarter, Canillo and Encamp, encompassing an area of 1,926 hectares with 112 slopes and with a capacity of 100,700 skiers per hour.

During the ski season of 2004/2005 the resorts Pal – Arinsal and Ordino – Arcalis merged their commercial interests under the name of Vallnord. With a universal ski pass visitors have access to the slopes of both resorts. Today the resort VALLNORD encompasses an area of 67 slopes and has the capacity to hold 55,690 skiers per hour.

In 2015 the World Ski Awards gave the title of the best ski resort in Andorra to Vallnord for the second time.

Naturlandia – La Rabassa: cross-country ski resort. Family ski resort Naturlandia is located in Sant Julia de Loria. It occupies over 100 hectares and is divided into two sectors, which are located at an altitude of 1,600 and 2,000 meters respectively. The themed ecopark offers 15 km of marked slopes and alongside this there are zones for family leisure and activities. The choice of activities is extremely wide: highlands tours, several cycling routes, quad biking, pony riding, mushing.

A new attraction AIR-TREKK was launched a few years ago. Unifying a sense of thrill and adventure, the construction consists of ten towers and 3 levels of varying height, linked rope elements and wire lines. Air-Trekk is the largest and highest attraction in Europe.

The park also has the longest alpine toboggan in Europe (Tobotronc). Its length is more than 5,300 meters with 400 meters of altitude differences. The system has 1,700m of ascents and 3,600m of descents. The ride takes about 30 minutes.

The Animal Park (Annimalier Parc) was created in Naturlandia to diversify the touristic offer. Here, visitors can enjoy watching bears, wolves and birds.

Hotels near the slopes