The Linguistic Policy Service has edited the work of Xavier Planas and his team that received the Lidia Armengol Vila Language Research Assistance 2013 • All PYRENEES · France, Spain, Andorra 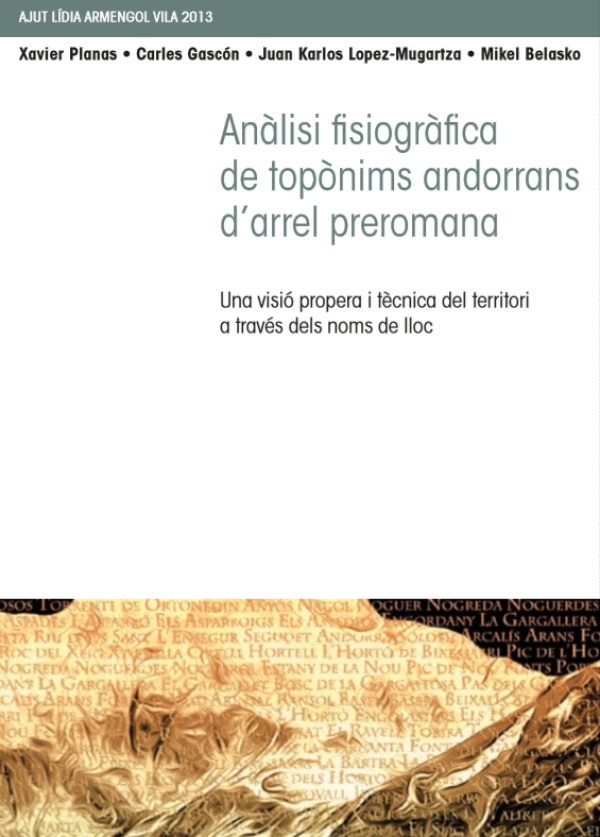 The Linguistic Policy Service has edited the work of Xavier Planas and his team that received the Lidia Armengol Vila Language Research Assistance 2013.

“Physiographic analysis of pre-Roman root toponyms” addresses the study of place names based on a multidisciplinary methodology that is based on comparative physiographic analysis (landscape, geological, etc.), the historical and linguistic knowledge of the territory and the comparison with the Basque country.

In October 2013, the aid selection committee evaluated the Planas proposal as a high-quality project and emphasized methodological innovation, specifically the multidisciplinary approach to working on the topic of pre – an unusual aspect, because the approach is usually carried out from a specific scientific field and does not include geography, history and language.

Xavier Planas is a geologist and currently works as a natural risk technician at the Ministry of Territorial Planning of the Government. He has collaborated with Carles Gascón, a geographer and historian, and the Basque philologists and specialists in toponymy Juan Karlos Lopez-Mugartza and Mikel Belasko.

The work can be purchased at bookshops at a price of 12 euros.

Of the 4,240 entries of the Nomenclator of Andorra, place names that can be considered presumably of pre-Roman root are less than 10%. Of the eighteen individualized and analyzed groups, at least three (including toponyms such as Canillo, Bartra and Seig / Xeig) seem to have an etymology and a logical explanation through Indo-European. The authors have also detected a group of non-Indo-European place-names with more or less Basque-born affinities.

lthough there are signs that lead us to a pre-Roman stage near the Basque, they recognize that, at first glance and in general terms, Andorran toponymy seems quite opaque from the point of view of Basque linguistics. Plausible toponymic continuers are, for example, Hortó, which does not present impediments to correlate with Basque lurte (‘landslide’); Rat, with harrate (‘mountain harbor’), or Baser, with baxa (‘cliff’). Similarly, there are other toponyms such as Andorra, Arcalís, Anyós and Bixessarri in which Basque linguistics, despite recognizing that there is an affinity or a certain hierarchy, or are not of clear interpretation for this language, or the physiographic interpretation that is made (‘important source’, ‘landslide’, ‘rocky protuberance’ or ‘place with a lot of rocks or rocks’, respectively) does not facilitate a direct conception.

The Government summoned a grant aimed at encouraging study and research in the field of language in 2001. That first year fell into the work ‘Uses and Social Representations of Catalan in Andorra; Delimitation of variables that favor the use of Catalan in Andorra’ by Ernest Querol Puig. They followed the interrelation between the cultural identity of the Andorran population and its linguistic uses (Josep Manel Ballarín, 2002), description, analysis and adaptation of the language model (s) used in the oral media of Andorra (Marina Solís and Laura Puigdomènech, 2003) and bilingual dictionaries Czech-Catalan and Catalan-Czech (Jan Schejbal, 2014).

In February 2006, the Language Policy Service proposed that Lidia be given the name of Lídia Armengol Vila, because it represented a good opportunity to remember and pay homage to the figure of a person who had been at the forefront of the country’s cultural development. The first Lídia Armengol Vila was for young people and languages of Andorra (Alexandra Monné Bellmunt, 2006). Subsequently, the awardees were The Andorran Speech of the 17th and 18th Centuries: Analysis and Prospection (Xavier Rull Muruzàbal, 2007), Systemic Model of the Evolution of the Use of Catalan in Andorra (Catalan Language Research Group at the University of Barcelona ‘Andorra, 2008), The sociolinguistic scenario of the school population of Andorra (Estel Margarit i Viñals, 2010), Physiographic analysis of pre-Roman root Andorran place-names (Xavier Planas Ambatlle, 2013) and Use of Catalan terminology in Andorra : characterization and analysis in the field of winter sports (M. Amor Montané March, 2015).