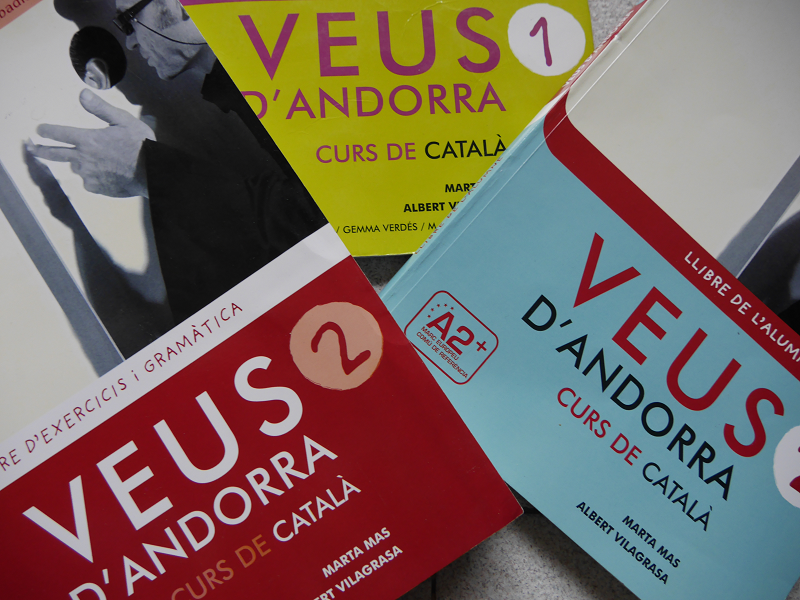 What language is spoken in Andorra?

Catalan is one of Romanic languages. It is spoken by the citizens of 4 countries: Andorra, Spain, France and Italy. On the territory of Spain it is Catalonia or Principate, a greater part of Valencia, Balearic Islands and a small stripe of land in the east of Aragon. In France it is Eastern Pyrenees department (Languedoc-Roussillon province), that is often called “Northern Catalonia”. Catalan is also spoken in Alger city (Sardinia, Italy). In Andorra Catalan has ever been a state language. In 2015 for the first time for many years Catalan language is considered to be the most often used among the population of Andorra. According to the research which is conducted every 5 years, 49% of respondents speak Catalan, read and write – 46% of respondents respectively. Look for details here

Starting from XIII century Catalan, which at that time didn’t differ a lot from Provençal, started to establish its positions as a separate language. This is a period when Great Chronicles appeared, at this time philosophic and imaginative writings of Ramon Llull saw the light. In the period of Pere el Ceremonios reign translation activities were flourishing. Most popular workings of that time were translated in Catalan.

The Golden Age of Catalan literature started from the end of XIV century and attained its peak in XV century. Francesc Eiximenis, Bernat Metge and Antoni Canals gave life to outstanding Catalan prose. Andreu Febrer and Jordi de Sant Jordi wrote their poetry in the language that every other time wenrt further and further from Provençal. One of the brightest and unsurpassable masters of poetical language of the Middle Ages was,  no doubt, Ausias March. In the genre of novel the palm is shared between Joanot Martorell with his famous “Tirant lo Blanch” and the work of unknown author “Curial and Guelfa”. The second part of XV century is related to the names of such eminent masters of words as Jaume Roig and Rois de Corella.

The period of literature language grandeur coincided with the period of economic crisis that gave way to Spanish language infiltration and further dissemination. Day after day it strengthened its positions in all spheres of life of Catalonia. This process also touched upon Roussillon where French but not Spanish took the leading position after the moment the land was annexed by France (1659). The spiritual life in Catalan was paralyzed for almost 3 centuries (XVI-XIX). This period is marked in history as a period of decadence.

The process of Catalan language normalization – the major topic of I International Congress of Catalan language and literature (1906)—gained double meaning. From one side, merely linguistic (language normalization and standardization, orthography reform), from the other side – the demand to officially acknowledge Catalan, teaching it at schools and at institutes, usage at radio and TV what meant restoring lost positions both in social and in private life. Orthography reform of Catalan was related to the name of Pompeu Fabra that was considered to be the inspirer and developer of “Catalan orthography norms” together with the Institute of Catalan researches, described by him in 1913 and later on mentioned in the “Grammar of Catalan language”.

During the dictatorship of Franco Catalan was persecuted and was exempted from spheres of Spanish citizens, keeping its positions only in Andorra and in Southern-East France. After the dictator died the first newspaper in Catalan was edited only 1976. In 1977 after 38 years passed, Generality (the Autonomous Government of Andorra) was reestablished and Catalan was again proclaimed national language. In 1978 it was officially restored in educational system first in Catalonia and later on Balearic Islands and in Valencia.

Look for more information about Andorran literature: Essay «Literature of the world. Andorra: History and the modern days» by Albert Villaro, professor of Catalan literature, lecturer at the University of Andorra, writer, awarded of the literature prize Bertran 2015

Look for more information about multilingualism in Andorra: Blog of Clare Allcard “Welcome to multilingual Andorra — the country where speaking 3 languages is normal”