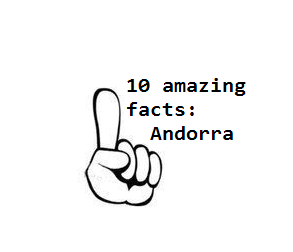 Fact 1. The Principality of Andorra is a small country that could be attributed to the group of European diminutive states together with Liechtenstein, Monaco and San-Marino. Alongside with that, Andorra is the biggest out of this group. The area of Andorra makes up 468 km2.

Fact 2. Andorra – is 14th oldest country in the world. The first settlements in the territory of what would later become Andorra began in the Ice Age, but there were no large groups inhabiting this territory until after the retreat of glaciers. Archeological excavations demonstrate that from 3500-2000 BC small groups of people lived in valleys near the Rio Valira and in caves in what would later become known as Andorra.

Fact 3. Historically, Co-princes of Andorra as well as the Head of the State possess general and inseparable power and can represent the Principality at the highest level. In accordance to different versions of “Pariatge” decree the title of co-Princes of the State is personal and inseparable and belongs to Urgell bishop and to the President of France. In accordance to the same decree Urgell bishop and the President of France guarantee the stability of political system of Andorra. Co-Princes are also in a position to solve controversial issues of the Principality and participate in the process of taking decisions by the governmental and constitutive power.

Fact 4. The capital of Andorra – Andorra la Vella – is the highest capital in Europe. Altitude above sea level: 1013 m.

Fact 5. Andorra – is the only country in the world where 3 systems of preschool and school education function officially: French, Spanish and Andorran.

Fact 6. In accordance to the UNO data Andorra is the second in the world for life span that is estimated to be 81,6 years

Fact 7. There is no army in Andorra. In case of a conflict the country is guarded by Spanish and French military forces. Andorra is safeguarding its neutrality for the last 700 years of history

Fact 8. The crime rate in Andorra, including street crimes – pickpocketing, car theft and disorderly conduct, almost at zero point. Andorra is at the list of the safest countries in the world. According to the World Bank’s report, Andorra ranks fifth in the world in terms of “political stability” and “no criminality” (index 1.32). For example, neighboring Spain is on the 31st place (index 0.01).

Fact 9. More than 15% of the Andorran territory is a national park under protection of UNESCO.

Fact 10. In accordance to International living index, Andorra takes the 12th position in the world for its living standards