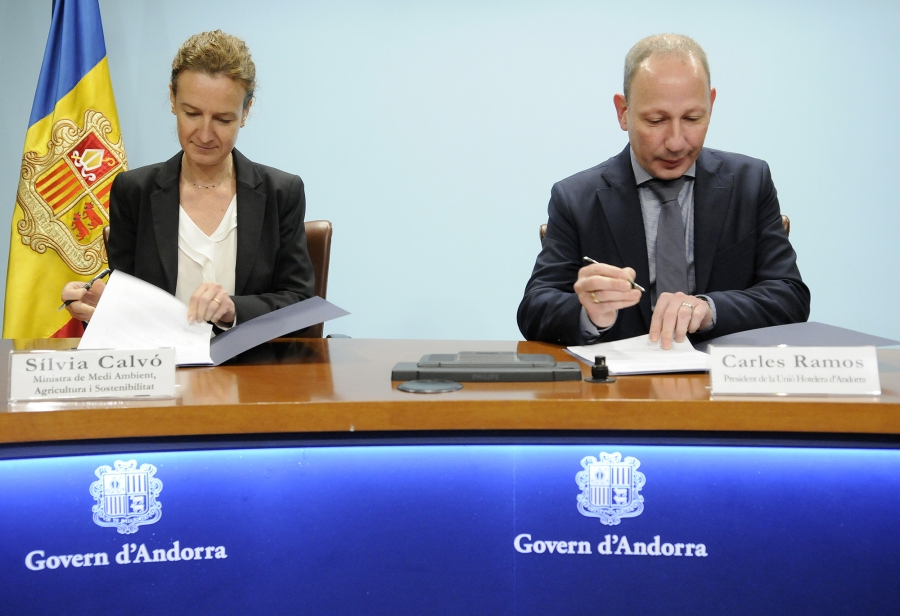 The Minister of the Environment, Agriculture and Sustainability, Sílvia Calvó, and the President of the Hotel Union of Andorra, Carles Ramos, signed a collaboration agreement between the two entities on Tuesday. The agreement aims to promote and disseminate different environmental aspects such as waste prevention and recycling, saving and efficient water consumption, the introduction of renewable energies and energy efficiency.

The Hotel Union of Andorra encompasses about eighty hotels and fifty restaurants, and it is the body that participates in any contact or negotiation with this group. Thus, given the interest in collaborating in the prevention and recycling program promoted by the Government within the National Waste Plan, it has been considered appropriate to establish a framework agreement that allows collaboration in many other environmental areas.

The Minister of the Environment, Agriculture and Sustainability highlighted the importance of having the collaboration of this sector that has a great impact on the actions of respect for the environment since it produces about 50% of the waste which is generated in the country and consumes 20% of the electrical energy. In fact, the hotel sector is a key player in achieving the objectives set out regarding waste recycling, and the Government in 2008 approved the Decree that declared the hotel sector as the singular producer of packaging waste, glass, cardboard and vegetable oils, which obliges these establishments to make a selective collection.

Calvó pointed out that thanks to the involvement of this sector, the percentages of selective collection have increased, which is why it has been considered beneficial for the Hotel Union of Andorra to be involved in the dissemination, among its partners, of others good environmental practices.

In the same vein, the president of the Hotel Union of Andorra, Carles Ramos, thanked him for having counted on them in this initiative and he assured the will to become a speaker throughout the sector to achieve great goals in favor of the environment.

Thus, the UHA will promote collaboration projects between the Ministry and the Hotel Union related to the prevention of waste and the promotion of the recycling, with the saving and the efficient consumption of the water and with the implantation of renewable energies and energy efficiency, among others. Likewise, for each of the specific projects of collaboration, a specific agreement will be signed.

One of the specific initiatives in which it has begun to work on is the creation of a sign for establishments that adhere to the sustainability project. To make this possible, all establishments will be visited individually to inform them about the project and to be able to promote good environmental practices. In fact, the Minister recalled that another person was also incorporated into the new Sustainable Andorra project to specifically focus on the dissemination and contact with the business sector and that it has been decided to start with the hotel sector due to its impact.