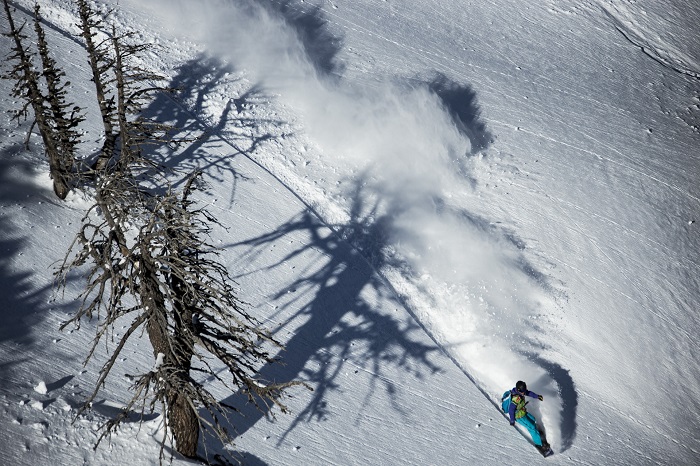 February 9, 2017 – Vallnord-Arcalís, Andorra – Freeride fans were finally treated to a phenomenal show today on the explosive first stop of the 2017 Swatch Freeride World Tour. Competitors gave it their all as the fifty-two riders made their way to the Pyrenean freeride capital for an action-packed competition on the feature-dense Serra de Balma venue.

Technical riding defined today’s event on the competition face situated at 2450m – known by riders as “Smoothy’s Garden” in honor of Sam Smoothy’s 2015 groundbreaking run – and located within the Vallnord-Arcalís resort.

The five-hundred vertical meter venue benefited from a multitude of line options, from powerful straightlines to technical cliff sections, with a gentle yet playful runout zone. Tumultuous weather over the past week deposited fresh snow in the Pyrenees, with brilliant blue skies finally making an appearance for competition day and offering optimal riding conditions for competitors.

The first place position on the ski podium was reserved for Drew Tabke (USA), who made the venue his easel as he painted a fantastically artistic line down the face starting with a massive and committing air to an improbably relaxed backflip. Kristofer Turdell (SWE) discovered a bold and powerful double-air which he capped with an impressive line and riding style, earning him second place. Perhaps the most full-throttle line of the day is credited to Spaniard favorite Aymar Navarro (ESP) as he pulled off a large air at the top of the venue that he transformed into a highly technical double-hit.

“We have been waiting to compete since Verbier since ski men didn’t compete there. Standby in Verbier a year ago, stand-by in Chamonix…it’s the hugest relief ever to ski after all the waiting. I am very happy with today. This week is about two events so there is still some work to do!” Drew Tabke, 1st ski men.

Arianna Tricomi (ITA) demonstrated a mastery that no other female skier could match with a powerful line that integrated more airs than any other skier in the field, earning her first place. Jaclyn Paaso (USA) combined commitment and power into her line but was not able to clinch the first place position due to some minor technical errors. Opening her line with a demanding air that she then combined with impressive riding, Kylie Sivell (CAN) earned third place.

Sammy Luebke (USA) earned first place by taking every opportunity to grab his board and throw impressive spins, all while integrating his patented “snowboarder’s” style. Thomas Feurstein (AUT) edged into second place with an impressive line featuring two three-sixty degree spins and precise riding. Despite a biking injury over the summer, Ralph Backstrom (USA) initiated his line in a committing section of the rider’s right side of the venue, taking third place.

« I feel great, I have been in Europe for two weeks and I haven’t had many days of riding because of the conditions but now conditions improved, the sun came out and I was able to put down a run, I am super happy. I changed out my run a little last minute but I think it was for the better and I think I just had to tell myself to go for what I think is a winning run” Sammy Luebke, 1st Snowboard Men.

Anne-Flore Marxer (SUI) earned the win by taking advantage of the phenomenal conditions and selecting an aesthetic line complimented with several well-landed airs. Commitment was the theme of Nicola Thost’s (GER) second-place run which featured the biggest airs of the day in the category but was marred by a moment of loose riding. The calculated and methodical line of Mikaela Hollsten (FIN) earned her third place with a run that was defined by consistency.