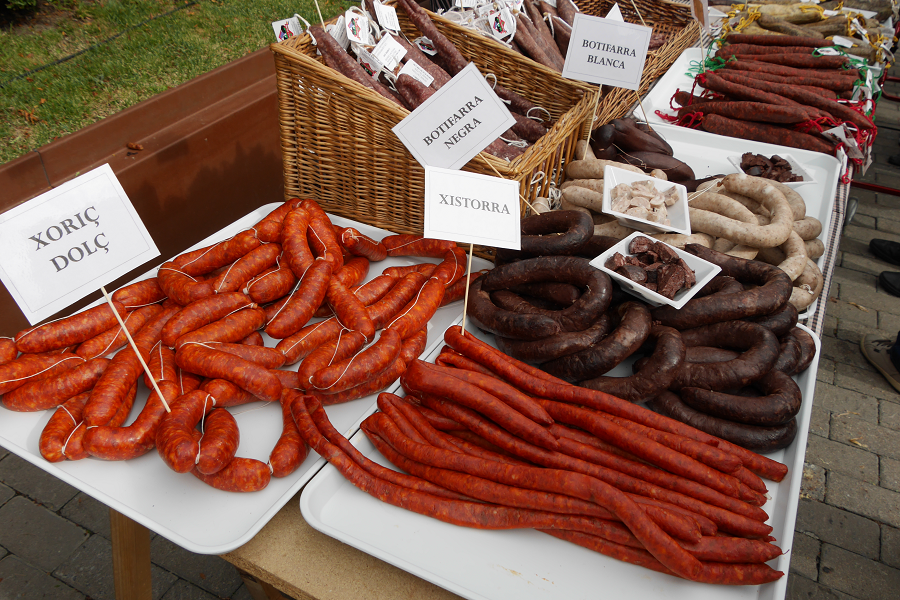 Botifarra is a type of sausage made by stuffing intestine of pork with minced and marinated meat from the same animal.

These sausages, also called botifarra vermella, roget or simply botifarra, must be cooked before eating them, often on a pan or on a grill, and they are served whole as a meal with some accompaniment. In Catalonia, botifarra with beans is very typical. They are those that are used on the botifarrades.

They are red before cooking and pink once cooked. They usually contain some pepper, often also garlic and parsley. Sometimes the minced meat is roasted or mushrooms are added before stuffing it in the intestine. It is also known as botifarra crua (eng. raw) or llonganissa in some parts of the Catalan Countries. 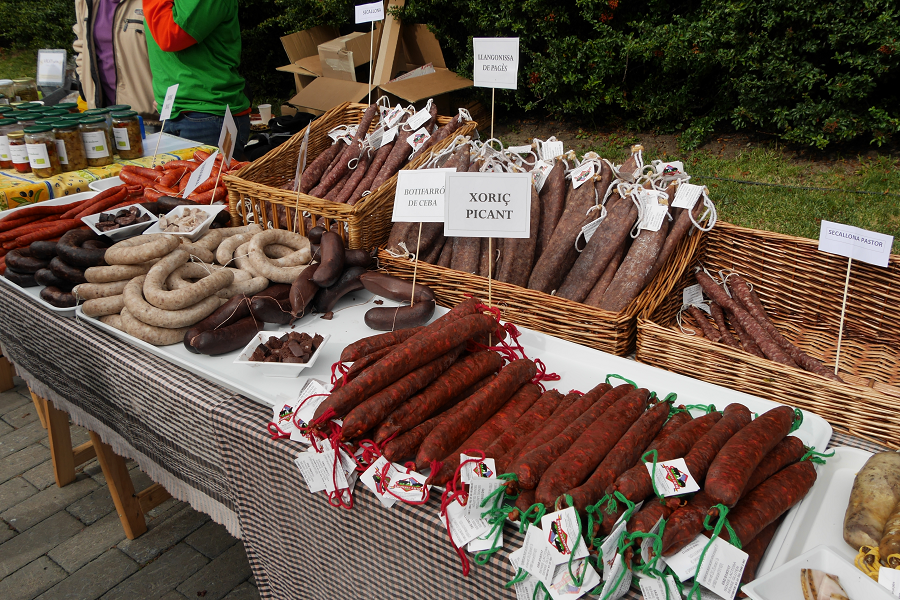 In the Valencian Country, except for the blanquet, a white botifarra, the botifarra is always black, dry or raw, and it is made with pork blood, lean meat, bacon and in some cases with some meat from pork head. There are varieties of it, with meat, onion and rice. Usually it is eaten fried or roasted, with the fat that drains out, and it is also eaten raw when dried. There are cooked varieties such as botifarra cuita or botifarró. Another typical one is the catalana with truffle, a sausage to eat in a sandwich or as tapas. The city of Ontinyent is known for the preparation of its typical Valencian sausages, although since Requena has become part of the Valencian Country in the 19th century, its sausages have become very popular. The fresh botifarra is known as llonganissa and is knotted with cords every 10 or 15 centimeters, making portions. It was called roget in the past and still, in some places, the fresh chorizo sausage for roasting or frying is called so.

In Occitania there are fresh sausages from Toulouse, very similar to Catalan raw butifarras. Fuet is made with the dried and cured botifarra vermella. In Girona. With very thin and narrow botifarras, dried and cured sausage called “cigala de gat” or “cigala” is made. 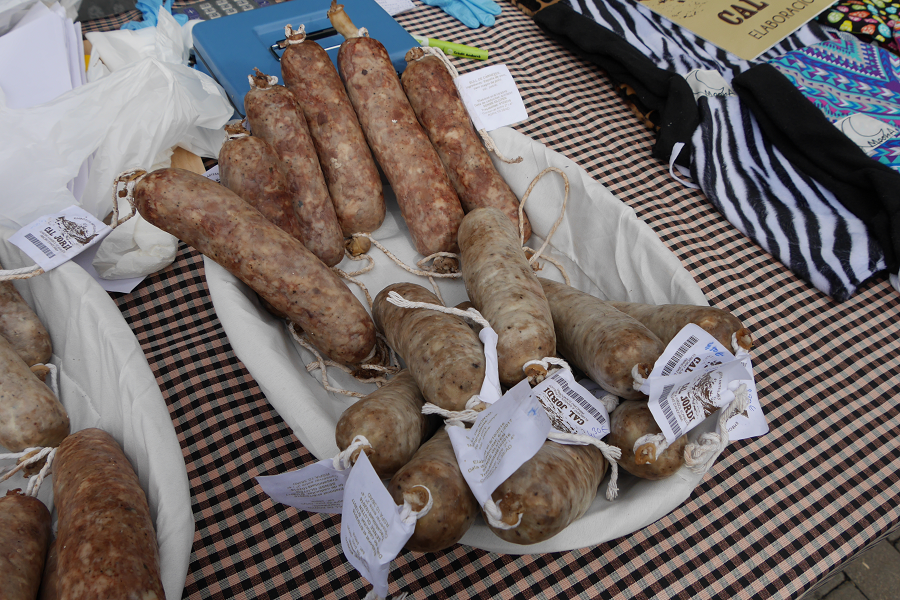 If we take into account that the names to call the same meat product vary, such as the botifarra vermella or roget in great part of Catalonia and the llonganissa in the Valencian Country or the Balearic Islands, it seems that they are derived from the making process and ingredients used in the making of the embotit (dry cured sausage) in question.

If we consider that there are records of the word llonganissa or sausage used already in the 15th century or earlier, we can not agree that the word llonganissa could have been taken from Spanish; rather it can be said that the word “butifarra” has replaced the word “llonganissa” in certain registers and areas in the linguistic domain of Catalan, especially in those that describe the raw and bloodless product. There is a curious Catalan saying: Where there is no blood, the butifarras are not made. 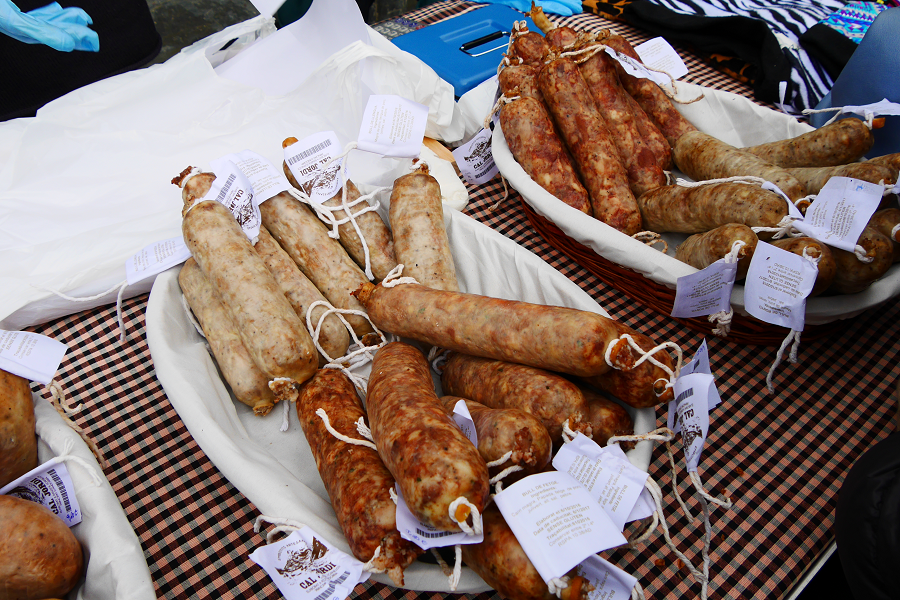 ● Baldana de sang: lean meat, bacon and blood. Made in Terres de l’Ebre
● Botifarra de carn: In the Valencian Country it is made with lean meat, blood and pieces of ear and cheek of pork. Similar to the baldana de sang.
● Mondongo or lamb botifarra: With lamb, blood and spices. Made in the counties of Tarragona.
● Botifarra traïdora: Made from of cuttings and fried pieces of meat that are first heated before making them into the sausage. Original from the northwestern regions of the Pyrenean.

The cooked (or cured) botifarras are considered embotits and are eaten cut into thin and raw slices, as a side dish or in a salad, although they can also be added to soups (such as escudella) or stews (such as faves ofegades ). The main difference between these botifarres and the raw or fresh ones (vermella, dolça, etc.) is that they are heated once or twice in water. The resulting juice is called brou bufat (eng. blown broth) and is used to make other dishes such as farro.

● White Botifarra or blanquet: Its main ingredient is lean meat and it does not contain any blood. In Catalonia, it’s typical to eat it on Fat Thursday. It is also used to make carn d’olla. Typical also in the Valencian Country where it is used as an ingredient in some typical dishes such as Putxero, Olleta (Escudella) or baked rice.
● Botifarra catalana: Made with greasy meat. It often contains truffles. In certain contexts, it is called simply catalana, and thus it appears in many sausage shops.
● Botifarra dolça: It contains sugar and lemon and it has a very sweet taste. When it is cooked it leaves a caramel like juice.
● Botifarra d’ou Contains eggs with meat. Its color is between whitish and yellowish. It is the most typical one for Fat Thursday.
● Botifarra negra or negret (black botifarra) The one in which pork meat and blood, when cooked in a boiler, turns black. It is used in carn d’olla. Also eaten for fat Thursday. In the Valencian Country, this type of embotit is usually referred to as botifarra cuita, dried, and botifarró.
● Botifarró: in Catalonia it is like the botifarra negra, but with onion, and it is cooked in a boiler. In Mallorca it is black butifarra but with meat often spiced with pine nuts and fennel seeds.
● Potrota: In Ontinyent (Valencia), it is made with lean pork and pork head and tongue, cooked and seasoned with black pepper and nutmeg, and for casing it uses the largest parts of the pork intestine.
● Bull or paltruc: it’s a very thick sausage stuffed in the pork’s tender intestine. It comes in varieties such as: bull blanc (or d’ou), bull negre, bull de llengua, bull de ronyó, bull de fetge and bull de donja o gras with characteristics such as those of botifarras with the same names. There are different opinions about the origin of the name. Some say that the name “bull” comes from the Latin name botifarra botulu. Others claim that because their components are the tongue, and other internal organs that take longer to cook, they were formerly boiled (bullir in catalan) in a pot over high flame before making them into embotits.
● The bisbe, bisbe negre and bisbot are botifarras that are rich in blood (not as much in the case of the bisbe blanc) and very similar to bull. While the normal bull is made with the pork’s large intestine, the bisbe is made with the stomach or with the appendix of the pig’s gut, which is said to be the reason why it took the name bisbe. Other opinions say that it has this name because it is a very rich and exquisite meal, worthy of a bishop. Traditionally in Catalonia, when a bishop visited the town, people brought the best food to his table in a welcome sign. From this custom comes the old expression: “He menjat com un bisbe” meaning “I’ve eaten like a bishop”.
● Botifarra terregada made from pork offal, onions, garlic, almonds and red wine, inspired by Terregada, the traditional dish of the cuisine from Terrassa.
● Botifarra de músic made with nuts and dried fruit (hazelnuts, almonds, walnuts and raisins) and flavored with a touch of sweet wine. This type of sausage was created in Terrassa on the occasion of the 30th anniversary of the Jazz Festival of the city, and it is only on sale during the festival week.
● Rice Botifarra or baldana d’arròs: it is the most typical product of Terres de l’Ebre, due to the abundance and quality of the rice that is grown in the area. In addition to lean meat, it contains cooked rice and spices, also blood is added in order to tie the mixture and give it flavor. It is very good served hot, fresh from the boiling water or grill, or as an ingredient in different dishes made with this typical product.
● Baldana de ceba or onion botifarró. Variation of the previous one, with onion. Likewise, in Valencia, the onion botifarra is made with lean meat, bacon and pork blood.
● Other varieties include botifarra de perol or parracs, donegal, botifarra de fetge (liver), botifarra d’ou i fetge (egg and liver botifarra) and botifarra de barrilla. 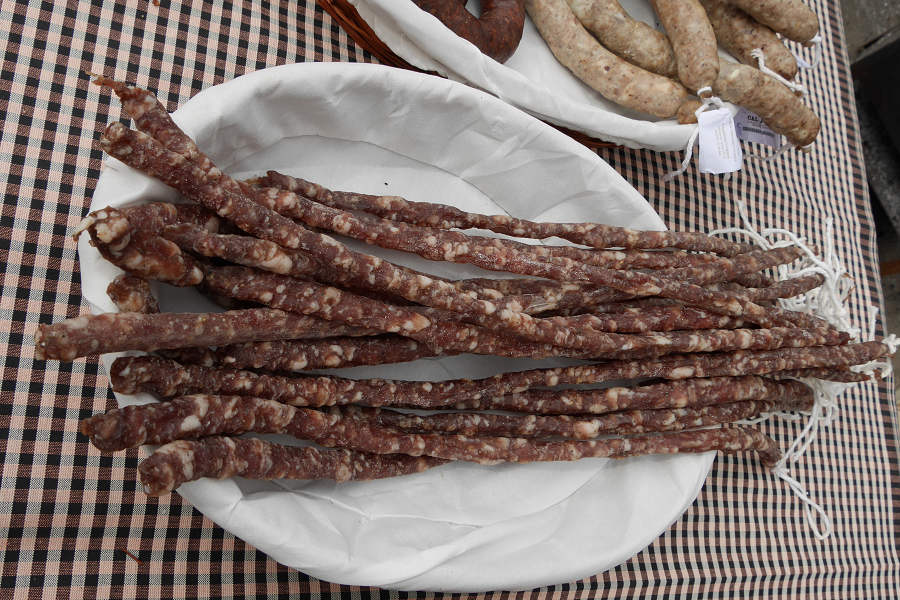 Catalan botifarra is different from other sausages as it is made only with lean pork (usually loin and cuttings), to which some bacon can be added as a condiment, although it is not necessary. The meat is finely chopped, salted and a pinch of black pepper is added. Each producer has its own recipe, where what changes and gives the special taste of each botifarra is the condiments and, sometimes, some other added products, which, depending on the type of sausage, can be mushrooms, pork liver or foie gras, garlic, parsley, honey, etc. The ingredients are mixed by kneading with hands and than they are stuffed in the large pork intestine. They are separated into portions of about fifteen centimeters by twisting each botifarra. They are left to rest for one morning or one afternoon on a clean cloth or absorbent paper and stored in the refrigerator.

If instead of stuffing it in the large intestine, the thin one is used, Catalan sausages are obtained.

The botifarra is usually fried in a little oil, grilled on a pan, or barbecued. Before cooking, it is necessary to puncture the skin with a fork several times. It can also be cooked in the oven, or in a casserole, you can add it whole or cut into pieces into escudella and vegetables or beans dishes, you can undo it to use it to stuff squid or vegetables, to season macaroni, etc.

The botifarra with beans or “botifarra amb seques” is a typical and emblematic Catalan dish.

Pieces of botifarra (black and white) are one of the essential ingredients of the Escudella and carn d’olla and with broad beans of faves a la catalana.

With white botifarra cut into slices an omelette or truita of botifarra can be made.

Botifarrada takes place when a group of friends and family meet to make grilled sausages. It’s a common custom to have a botifarrada in a group where everyone can have a good time chatting, eating and drinking. There are also large botifarradas organised during festivals.