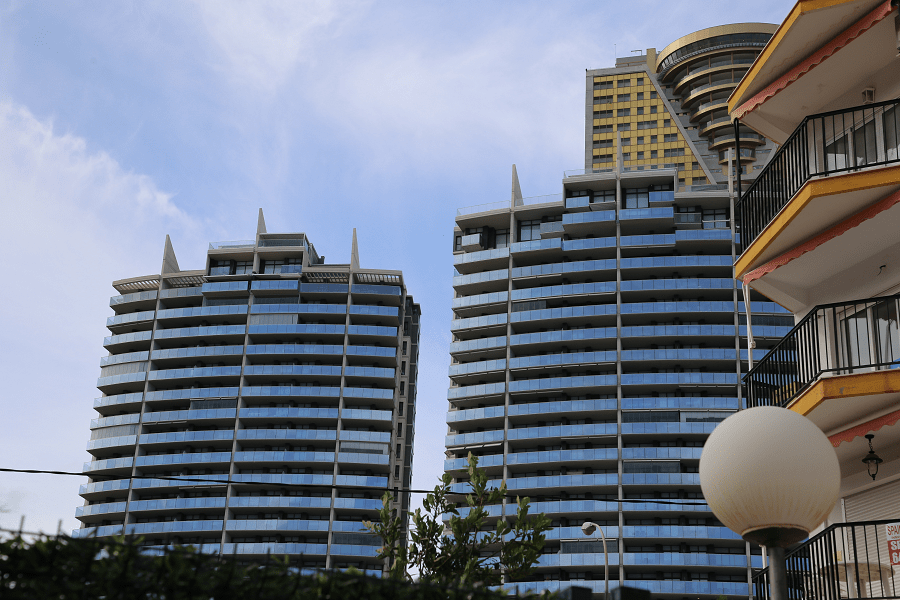 It’s a popular part of the Costa Blanca of the Mediterranean resorts of Spain thanks to its beaches and nightlife, reaching 400,000 inhabitants in summer. Benidorm is the third city with the most hotel beds in Spain after Madrid and Barcelona.

Benidorm is the first Spanish city to receive the Smart Tourist Destination certificate, awarded by the Institute for Tourist Quality in Spain (ICTE) thanks to innovation, accessibility, digital transformation and its vertical model that allows a better use of the resources. 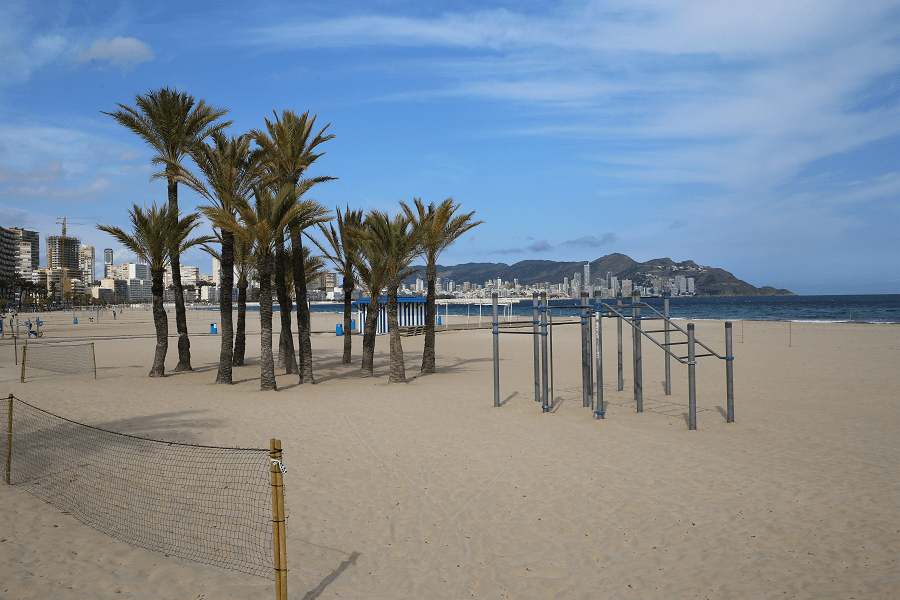 The tallest building in Spain is located in Benidorm – Gran Bali, whose height is 210 m.

Tossal de la Cala (3rd-1st centuries BC). It is a Roman settlement that is a part of the activity of the Benidorm area as a commercial exchange point since ancient times. 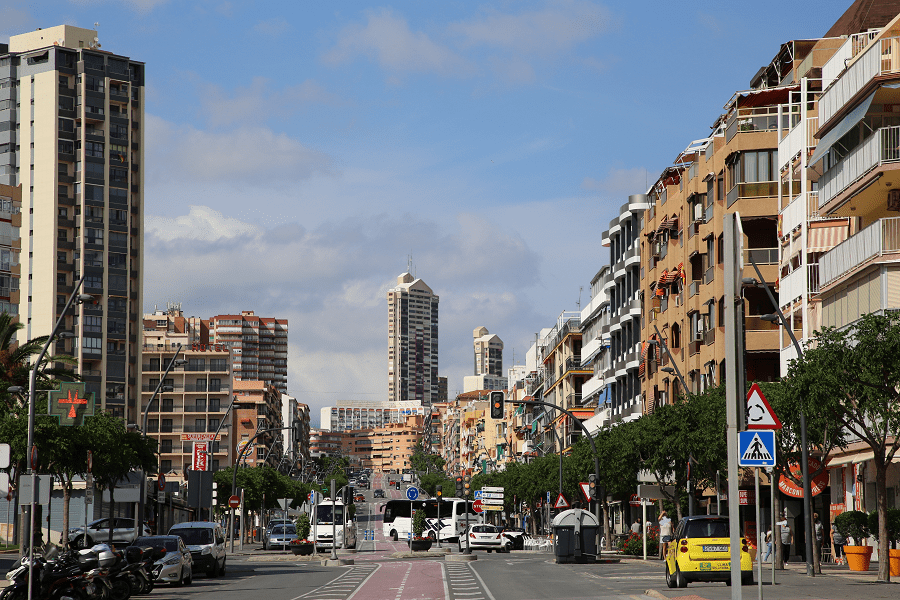 The Mirador de la Punta del Canfali. The fortress that served as a defense against the incursions of Algerian and Barbary pirates in the 14th, 15th and 16th centuries stands on the large rock that divides the two beaches. Later the Castle was abandoned, and today only some remains of the walls remain on the rocks of the viewpoint, also known as the Mediterranean balcony.

Church of San Jaime and Santa Ana. It is located in the upper part of the old town, on top of the Canfali hill. It was built between 1740 and 1780 after the discovery of the Virgen del Sufragio, patron saint of Benidorm. 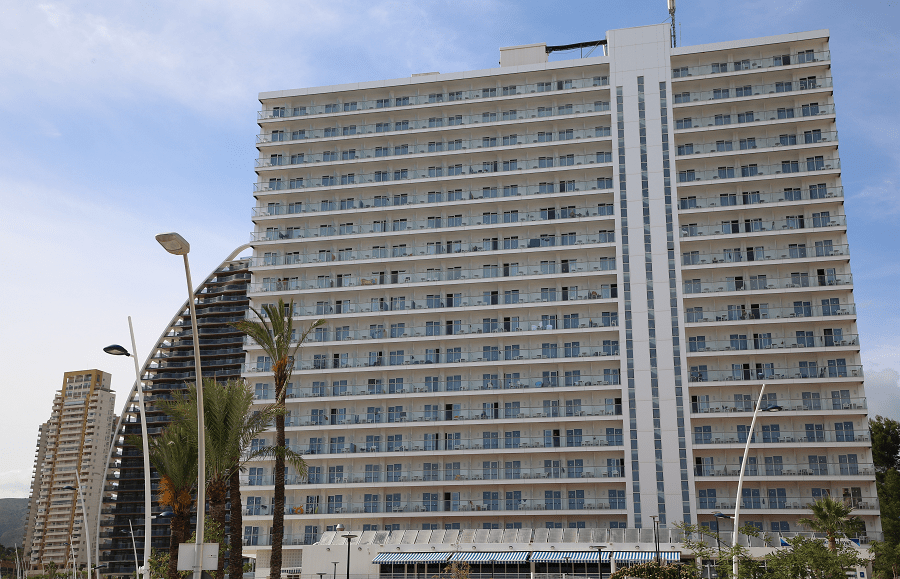 Benidorm Island. Closing the bay there is a triangular island, called L’Illa and also Isla de los Periodistas. The island of Benidorm forms a rocky mass of triangular appearance (seen from the beach) and of about 6, 57 ha, with a maximum length of 350 m and a maximum width of 260 m. It presents an abrupt relief that reaches 73 m in height and is separated from the coast by about three km of sea. It is made up of limestone and marly rocks from the Cretaceous.

The cross. The completion of an evangelizing mission in 1962 that culminated in a cross at the top of the Serra Gelà in protest at the withdrawal of the ban on bikini on the city’s beaches. The panoramic view of the five beaches of Benidorm from La Creu, is one of the most famous and an essential image in all Benidorm tourist brochures. 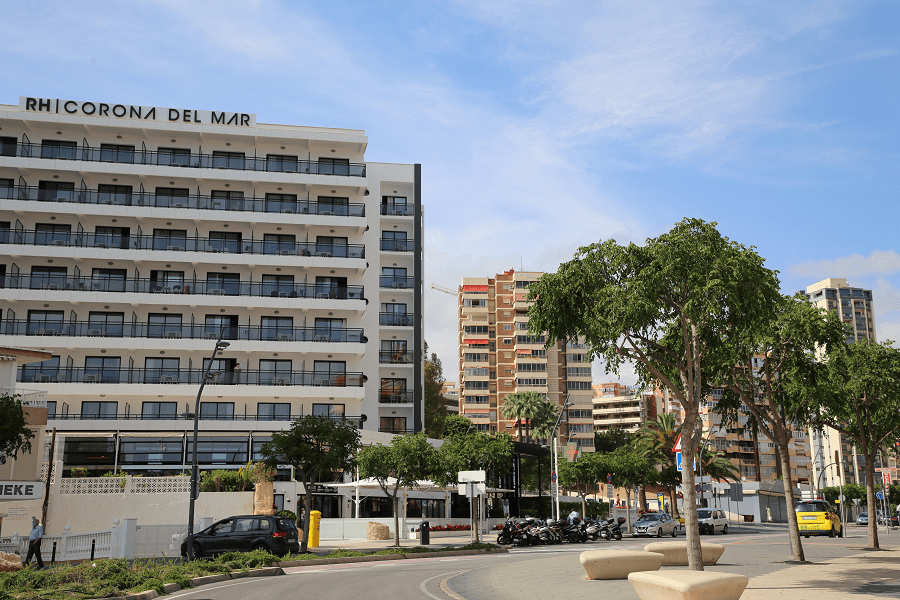 One of the most popular shopping places in Benidorm is La Marina trading center, located in the Finestrat area.

The biggest and most popular market in the city takes place every Wednesday and Sunday. Also known as ‘El Pueblo’ because it takes place next to Hotel Servigroup Pueblo on Avenida de L’Almirall Bernat de Sania, it proposes clothes, bags, shoes, souvenirs and house decorations. Like most markets, El Pueblo opens early in the morning (8am) and closes around lunch time before the hottest part of the day. 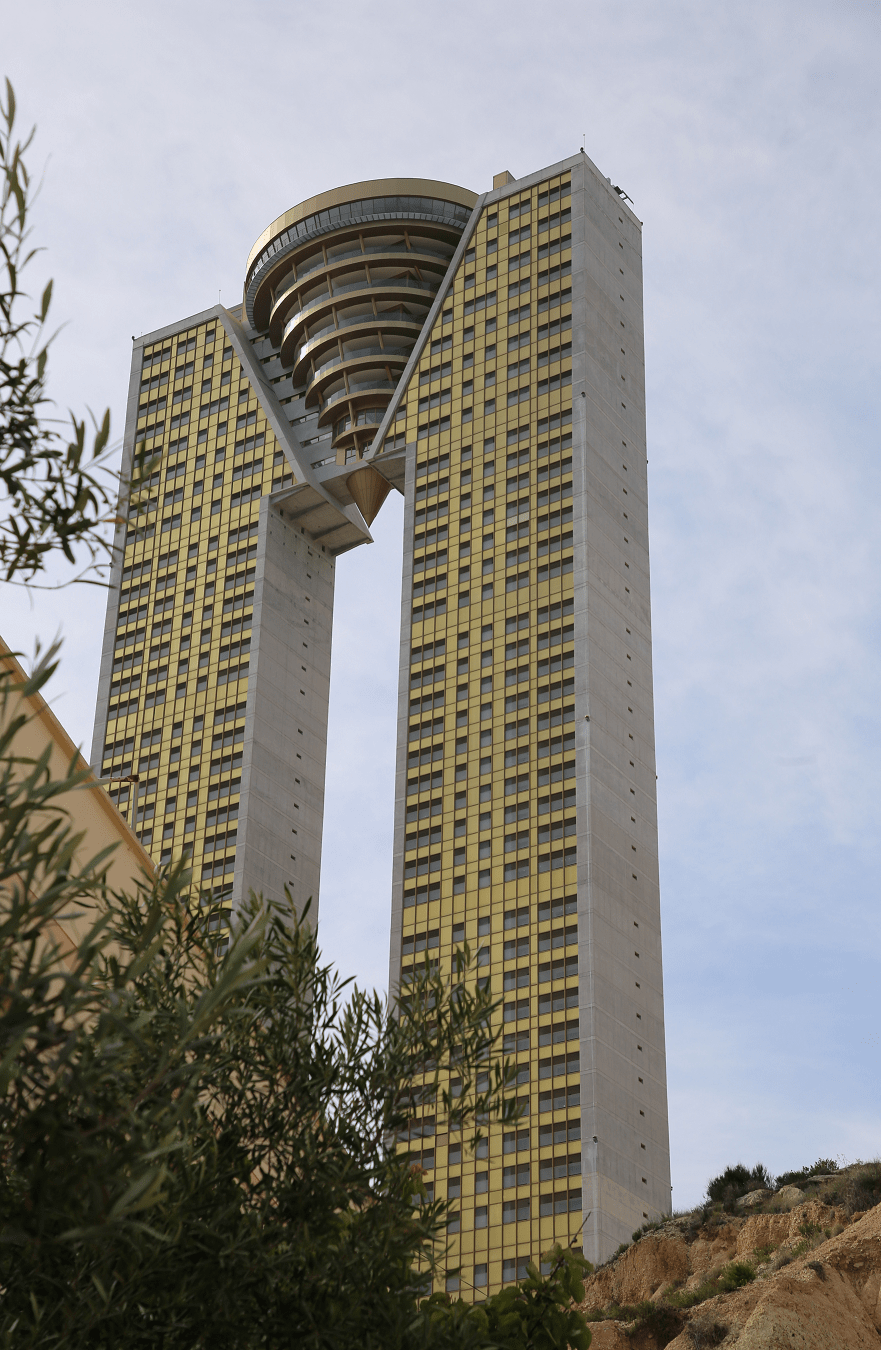 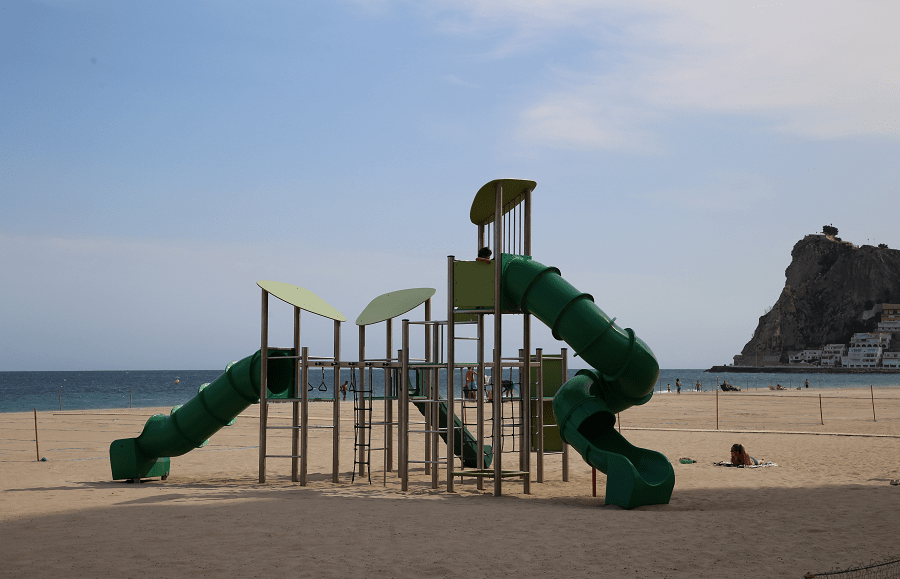 Benidorm can be accessed by vehicle via the N-332 road and the AP-7 motorway, which has two exits in Benidorm, the Poniente-Terra Mítica (65A) and the Levante (65).

It can also be accessed by intercity bus from Alicante, Valencia, Madrid, Cantabria, the Basque community, Navarre, La Rioja via the bus station located at the Levante de Benidorm exit in front of the fire station, the Palace of Justice, the “Illa de Benidorm” sports center and the “Salto del Agua” Educational Complex. 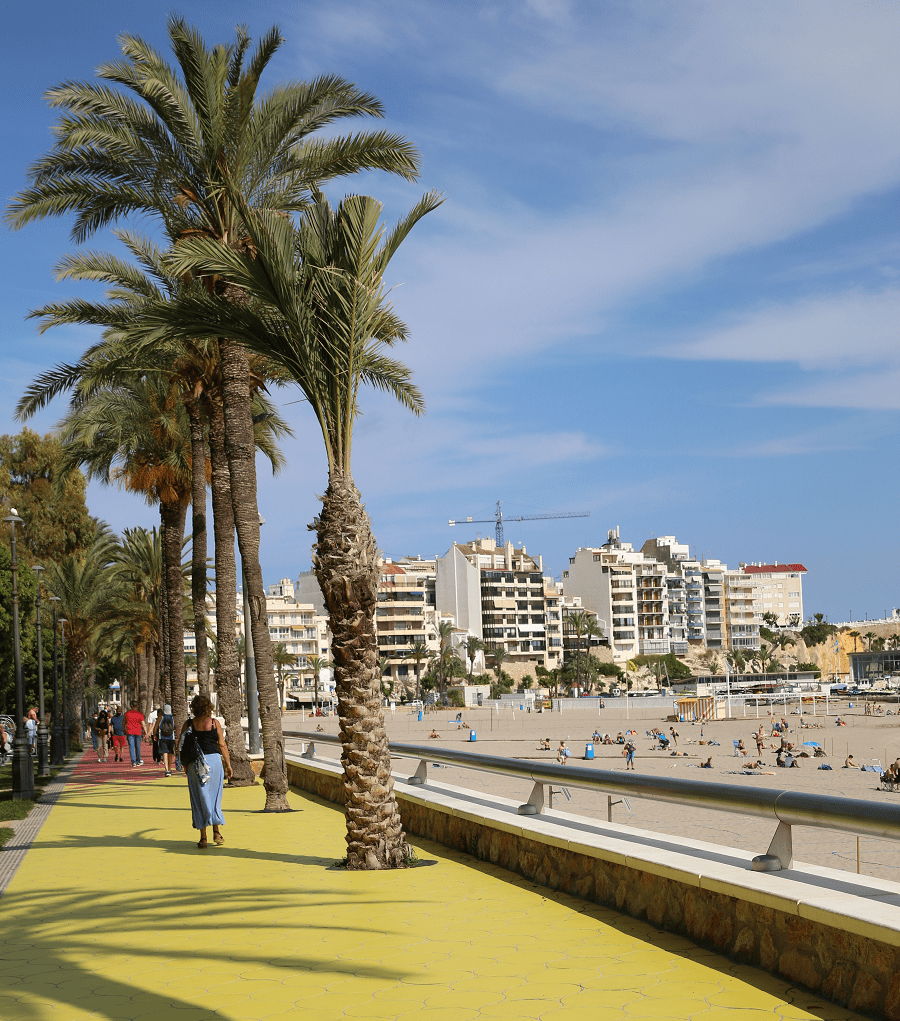 There is the possibility of accessing from Alicante or Denia, as well as from the towns located on the route, by train with the Alicante Metropolitan TRAM, formerly the Marina train.

Main transport in Benidorm are the taxi and the bus. In Benidorm there is an urban and interurban bus service (concession dependent on the Generalitat Valenciana) provided by the company Avanzabus, popularly called gua-gua, which covers the towns and surrounding areas such as Altea, Villajoyosa and the Castle of Guadalest. 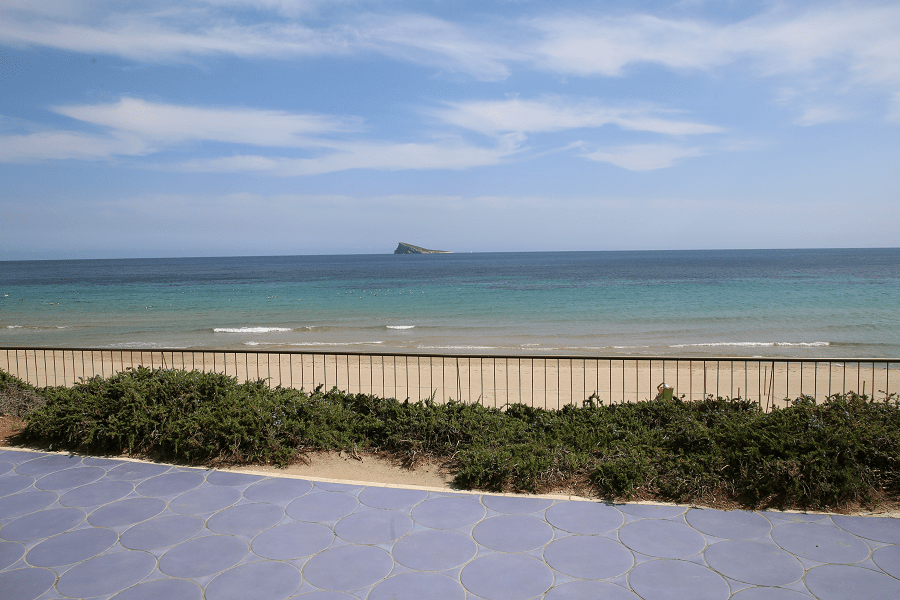 The port of Benidorm is located halfway between the Levante and Mal Pas beaches on one side and the Poniente beach on the other. 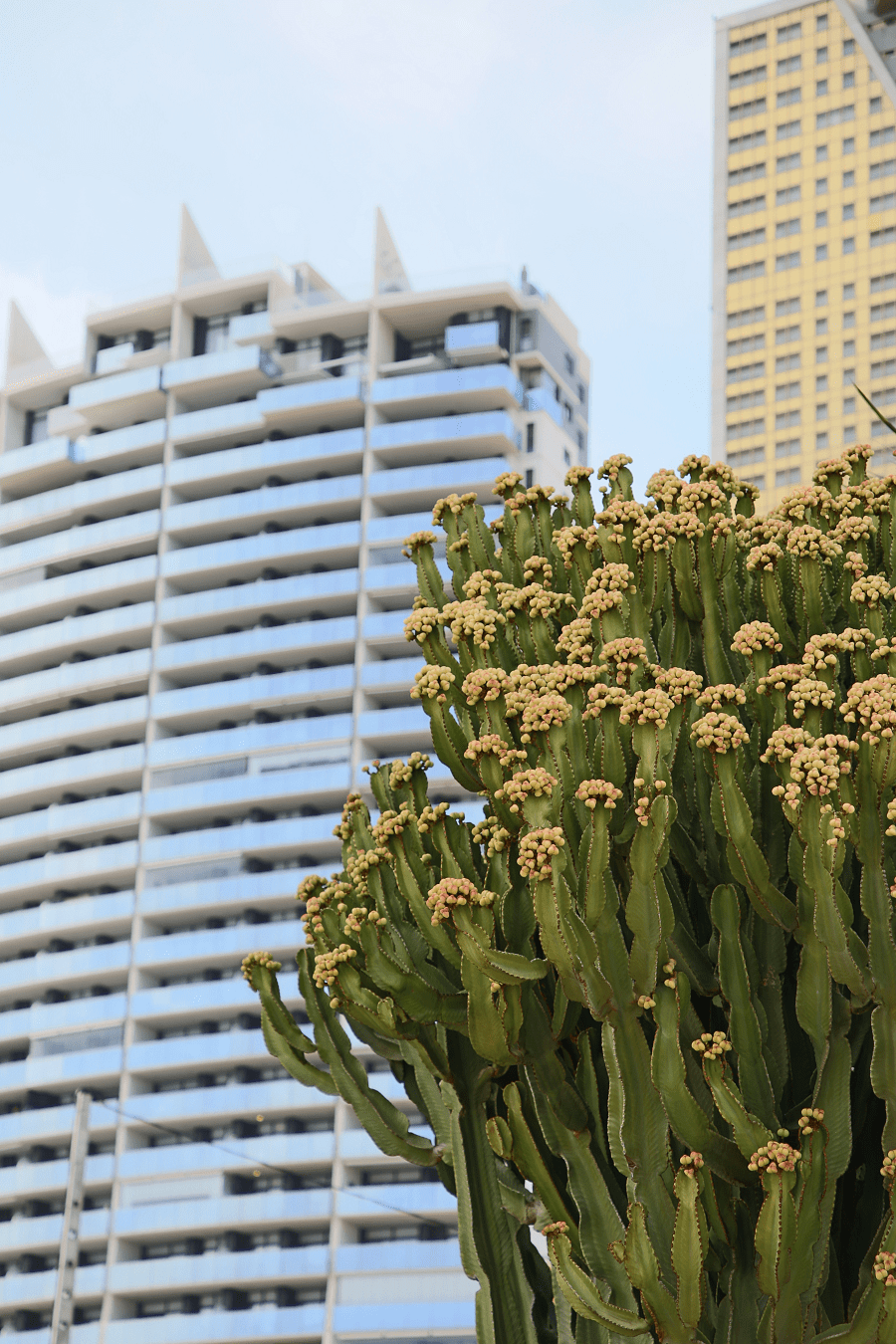 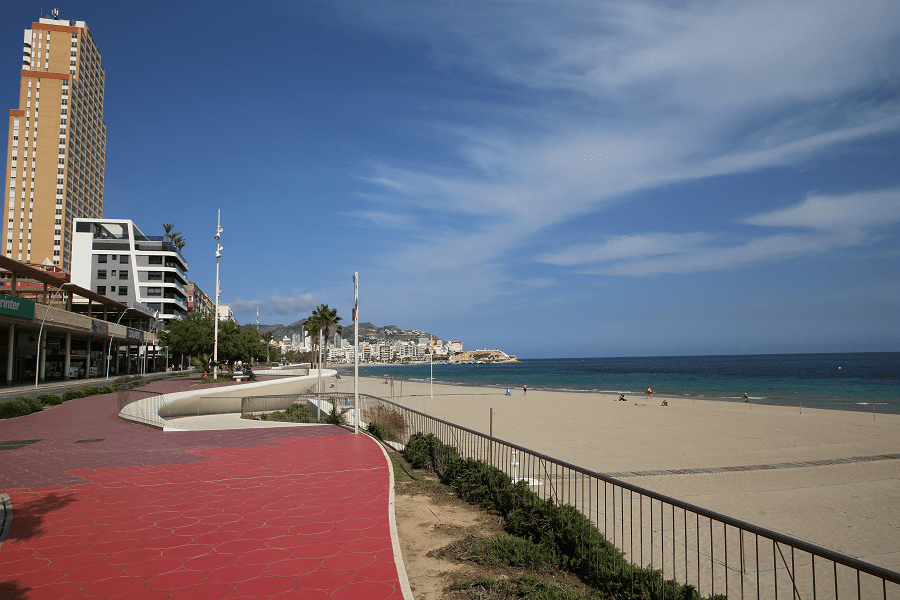