Andorra supports the principles of developing a "green" economy, paying great attention to the rational use of natural resources, said Olga Gelabert during 39th General Conference of UNESCO • All PYRENEES · France, Spain, Andorra 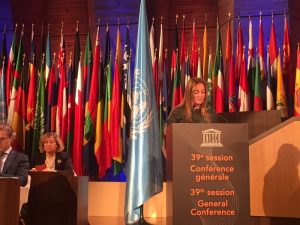 The Minister of Culture of Andorra, Olga Gelabert, took part in the 39th General Conference of the United Nations Educational, Scientific and Cultural Organization (UNESCO), which was held in Paris on 2d November. The Andorran delegation also included Ambassador of Andorra in France, UNESCO Permanent Delegate Cristina Rodríguez and Secretary-General of the UNESCO National Commission for UNESCO in Andorra, Jean-Michel Armengol.

The Minister spoke in the presence of the representatives of 195 Member States of UNESCO, indicating the priorities of Andorra in the field of education and culture and demonstrating Andorra’s commitment to the development of multilateral cooperation. The Minister also noted that Andorra supports the principles of developing a “green” economy, paying great attention to the rational use of natural resources.

Olga Zhelaber mentioned UNESCO projects in Andorra. Among them: the development of ecological tourism in the valley of the Madriu Perafita Claror, which is a natural UNESCO monument, the fight against doping in sport, and the organization of an art studio in Andorra, once every two years, with the participation of artists from around the world.