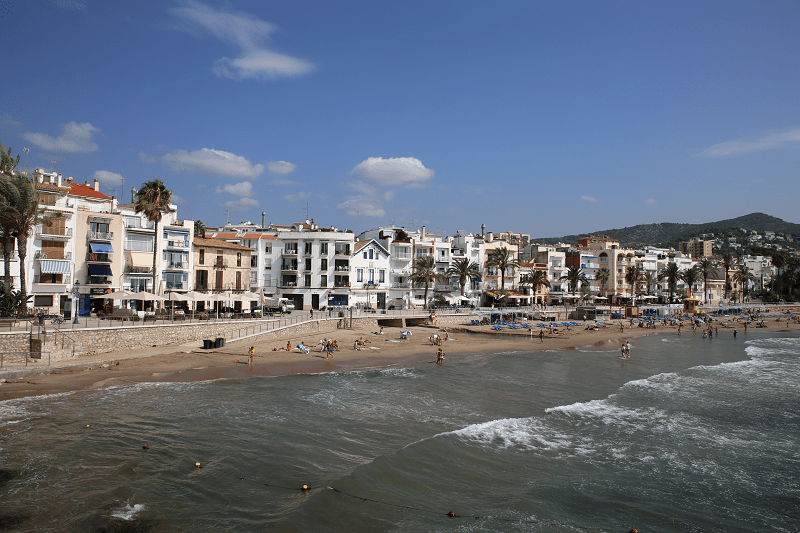 Sitges is a city and municipality in Spain, is part of the province of Barcelona as part of the autonomous community of Catalonia.

It’s a popular part of the Costa del Garraf of the Mediterranean resorts of Spain.

Sitges belongs to one of the oldest settlements of the Iberian peninsula. The first mention of the settlement of the Iberian tribes dates back to the 4th century AD. Since the 12th century, power in the surrounding settlements was in the hands of the dynasty of Sitges, from which the city received its name. The economic potential of this Spanish region was mainly based on winemaking and wine trade with other cities in Spain and other European countries.

Over the past 20 years, the population of Sitges has almost doubled and acquired the features of “cosmopolitanism and multinationalism”: 35% of residents are citizens of Great Britain, the Netherlands, France and, most notably, the richest country in Europe (where the highest standard of living is registered) – Scandinavia.

At present it is the most beautiful Catalan seaside town. For this reason, already in the 19th century and the beginning of the 20th century (until the 70’s) it was Sitges that was chosen by the Barcelona aristocracy as a destination to spend the weekend by the sea. 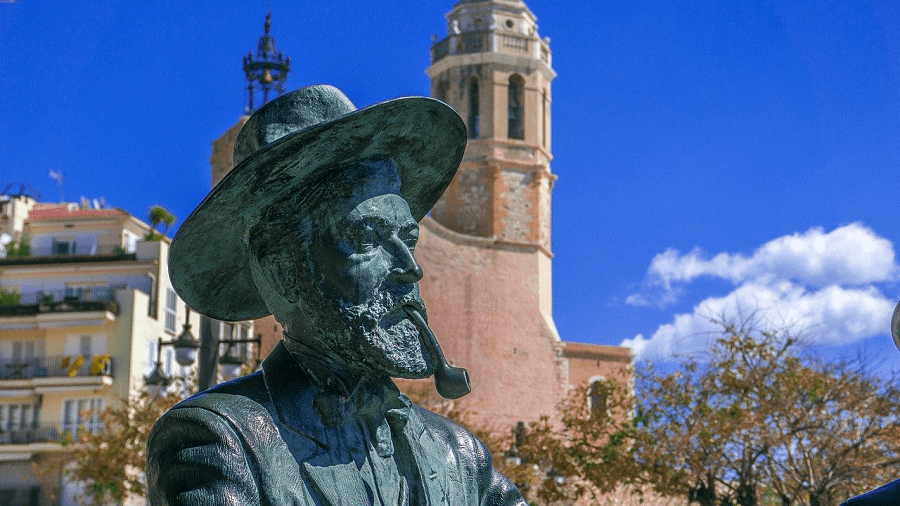 In 2018, the New York Times called the beaches of Sitges – the best beaches in Europe.

In addition, in recent years Sitges has become in fact the “resort” cultural capital of Catalonia: for example, now Sitges is the headquarters of the International Film Festival in Catalonia, one of the most important events in Europe’s film scene.

The best and most fashionable artists of Europe today have opened their galleries and shops in the city.

The basis of the Sitges’ economy – tourism. In Sitges, there are more than 4,500 hotel rooms. Half of them are high-class services provided by at least four-star hotels. This distinguishes it from the “cheap” Salou – the most popular and visited resort city of Catalonia, located just south of the province of Tarragona.

The quality and, most importantly, the style – the business card of Sitges – allows them to keep the brand and use the market of business tourism. This has turned the city into a five-star venue for business meetings, scientific conferences and elite corporate parties.

Since the 1990s, Sitges is one of the centers of gay tourism in Europe. You can also find a nudist beach.

Sitges has been referred to as the Saint-Tropez of Spain, with property prices approaching those of the most expensive European cities, the main reason for this being the setting by the sea and the surrounding Parc Natural del Garraf.

Sights, attractions and what to see

Casa Bacarol – shows the history of a famous brand of rum. You can participate in the preparation of the drink.

The Museum of Romanticism is located in the house of one of the wealthiest families of Sitges. Of interest are the decoration and interiors, as well as the famous collection of porcelain and rag dolls.

Cau Ferrat Museum – a museum dedicated to the work of the artist Santiago Rusinola. Here you can also find the work of Picasso or El Greco. 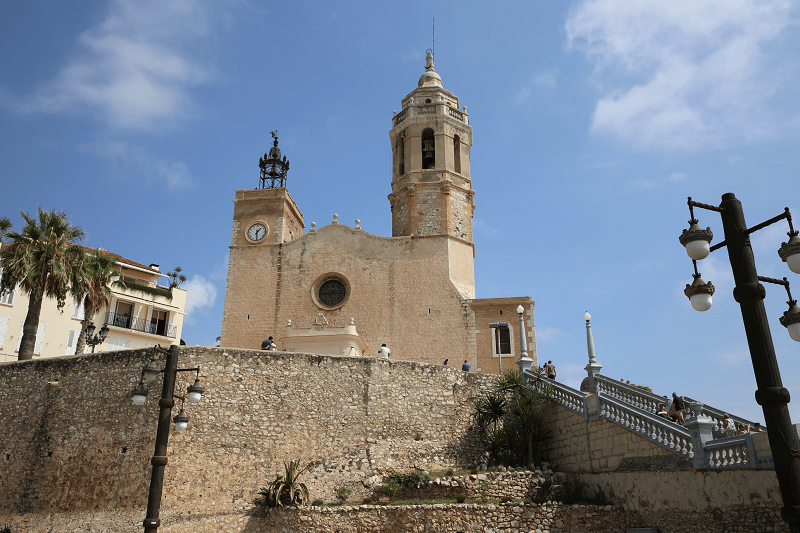 The Marisel Museum (Museu de Maricel) is famous for its collections of works of art from many eras, including Catalan art. In addition, the Marisel Museum showcases products made from precious metals, as well as ceramic and porcelain creations. The largest collection is the Vila de Sitges. The marine collection (miniatures, engravings, maps, tackles) is also of interest.

On the outskirts of the city is one of the symbols of the city – the church of St. Bartholomew. The church was built in the 17th century and has an extraordinary pinkish facade, which looks particularly beautiful in the evening. The best observation deck on the sea and the city in both directions adjoin the church. 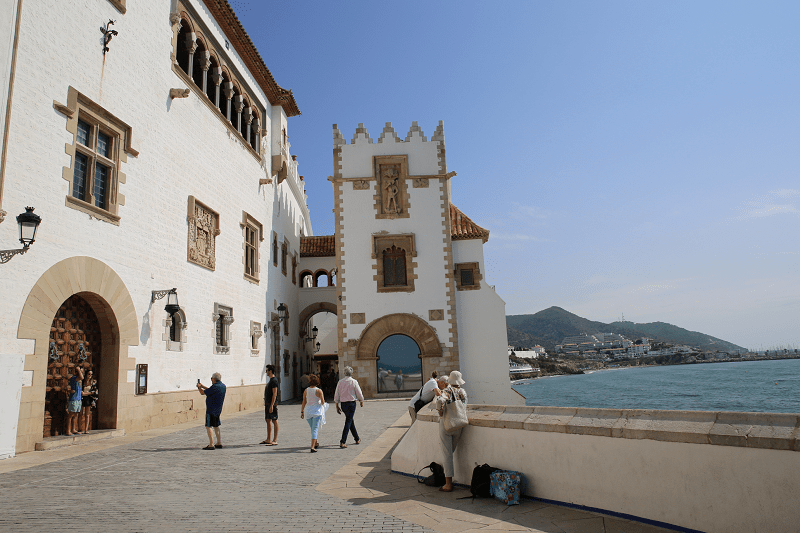 The main port of Sitges is Port d’Aiguadolç. It is located behind the church of Sitges, behind the last of Sitges’ beaches. This area of the city is considered the most elite, as it is here that most of the five-star hotels are located. Along the port there is Passeig del Port d’Aiguadolç. Huge palms protect tourists from the heat and make a walk along the coastal path comfortable even in the midday sun. 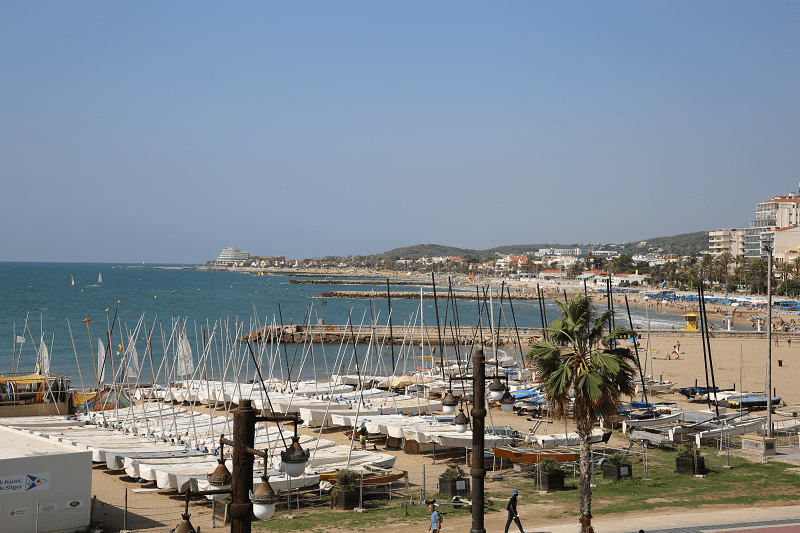 Beaches of Sitges or where to swim

Altogether there are more than 15 beaches in Sitges. The main beaches are: 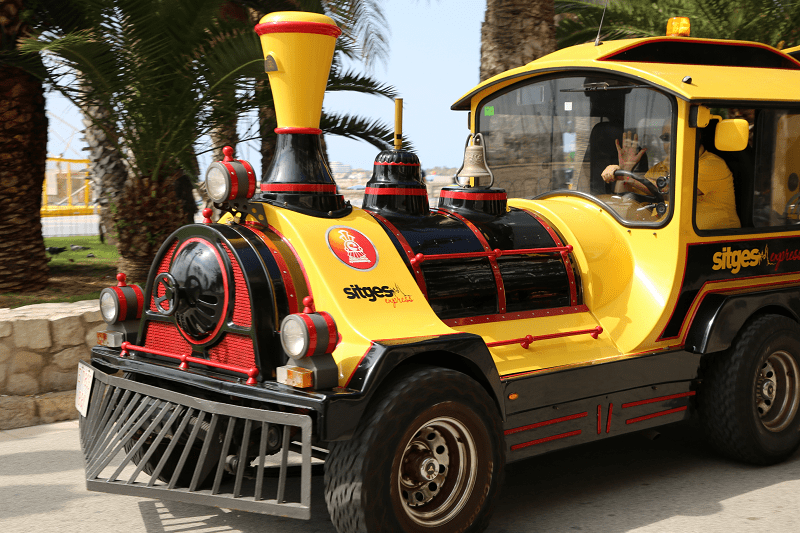 At night, on the main streets until the morning, music does not stop – it is here that the most famous nightclubs of the city are located: among them the famous Pacha and Atlantida network clubs. Small disco clubs are available on the beaches. One of the informal names of Sitges is “continental Ibiza”. Among the most popular places is Calle Montroig, where most of the nighttime fun takes place. Among the locals, the street is called “Carrer del Pecat” or “Street of Sin”.

How to get to Sitges?

The nearest international airport is El Prat in Barcelona. It is about 35 km away. To get to Sitges from the airport directly (without crossing through the center of Barcelona) it is possible: Monbus has more than 20 trips a day to Sitges. The first starts at 6.50, the last – 23.50. The journey takes about half an hour. Reservation in advance is not required. 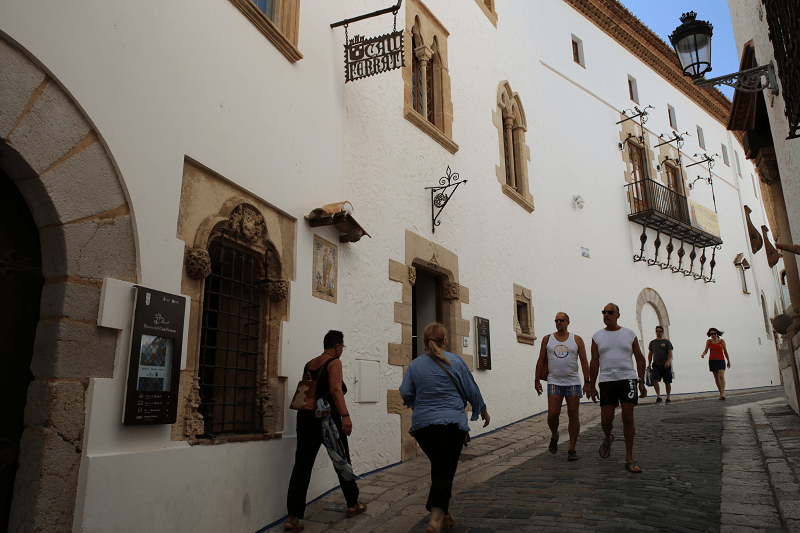 If you have a night flight, then you can get to the resort only by taxi (they are on duty at the arrival terminals 24 hours a day), or by ordering a transfer in advance. The advantage of transfers over taxis is that your driver will be waiting for your arrival. Prices for taxis and transfer, as a rule, do not differ.

From Barcelona, it is best to get to Sitges by train. In this direction there are electric trains from all the train stations in Barcelona (Estación de Francia, Passeig de Gracia, Sants). Booking of tickets is not required. The trains run throughout the day every 20 minutes. The journey takes about 35-50 minutes.

By car – the best way along the coast with delightful sea views is by going along the N-340. 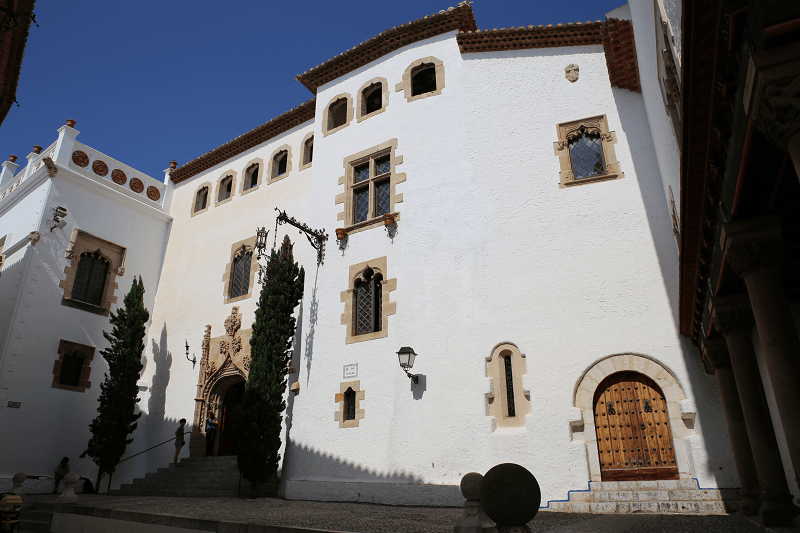 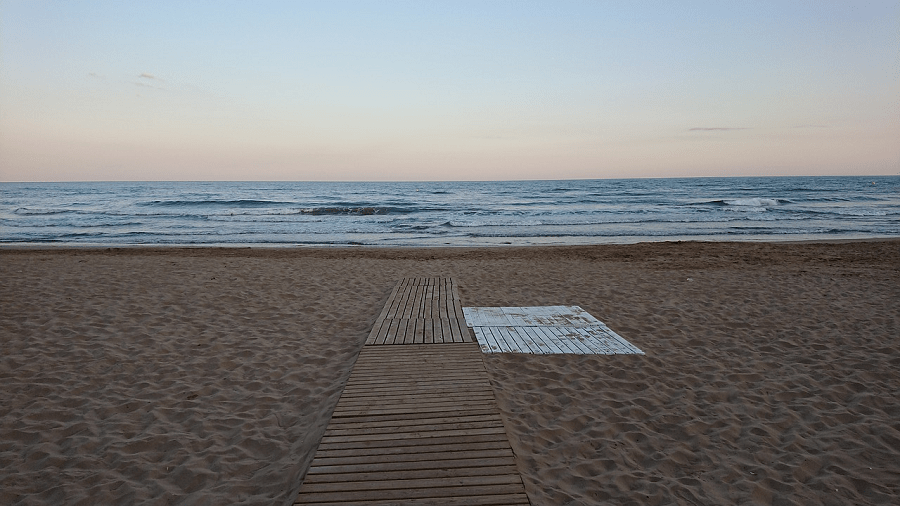