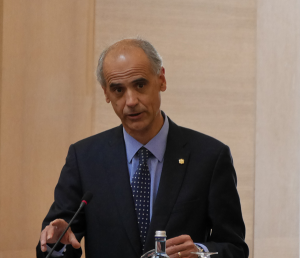 The Prime Minister of Andorra Antoni Marti participated in the conference “Global economy prospects”, which took place in a Spanish city of La Seu D’ Urgell near the border of Andorra with Spain. The conference, held on 17th June, was also attended by former managing director of IMF Michel Camdessus.

During his speech, Antoni Marti made a small historical digression, demonstrating the economic transformation of Andorra since 2011, when the first negotiations about cooperation with the EU started. He recalled that Andorra changed the law on foreign investment, opening the economy of the Principality for international capital, and also made adjustments to the tax code, imposing an income tax for residents. In addition, Andorra signed the agreements on the avoidance of double taxation with France and Spain.

Antoni Martí recalled Andorran banking crisis of 2015, which occurred in consequence of the scandal with BPA (Banca Privada D’Andorra), and how the government resolved this issue by restructuring and sale of the new structure Vallbanc to American investment company.

The head of government of Andorra also noted that in the autumn of next year, the Andorran Parliament would ratify the agreement on the automatic exchange of tax information with the EU and the OECD.

Antoni Martí said that Michel Camdessus had a great influence on the modernization of the economy of Andorra. “Report of Michel Camdessus, written in 2005 and dedicated to Andorra, turned out to be prophetic,” – said Antoni Martí.

Michel Camdessus, in his turn, expressed his respect for “the government of Andorra for the fact that the Principality embarked on the path of reforms, turning from protectionism and stagnation in the direction of openness and competitiveness.”