The secretary of the International Club John Pinnell speaks about the project of the public defibrillator towers installations in La Massana:

“The Andorran Red Cross has been trying to raise money to install defibrillator towers in key public spaces in the parishes of Andorra. Their initial plan was for seven – one for each parish, but with no funding available the reduced the initial target to three, for the two central parishes of Andorra la Vella and Escaldes Engordany and for the parish of La Massana, where the Consol Major (mayor) had already expressed an interest in having one installed.

The International Club of Andorra found out about this project and agreed to dedicate all the funds it raised in its summer event at Pal ski station, “[email protected]”, to this cause. On Sunday September 11, the sun shone and lots of people came to “[email protected]” to have fun and buy food and drink. A total of €5,000 was raised on the day and members made individual donations for this project of another €3,000 – enough to enable the Club to present a cheque for €8,000 to the Andorran Red Cross to fund two of the three defibrillator towers.

At the same time the Board of the Club agreed to dedicate another €4,000 from the proceeds of the annual Fira Benèfica to be held on November 27 in la Massana to fund the third defibrillator tower. 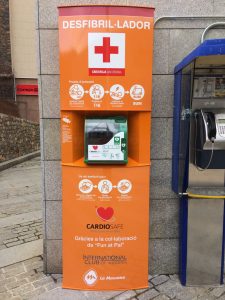 Look here for the full blog of International club of Andorra

The International Club of Andorra has a new Clubhouse

Charity Fair raised over €13,000 from which €7,500 will be donate to Fundació Privada Tutelar

[email protected] event got €3,500 for equipment for the Special olympics swimmers from Andorra

Fira Benèfica for 2016 held on November 27 at La Closeta, the parish community halls, in La Massana

Carisma – the evolution of a charity shop

The International Club is a non-profit association registered in Andorra that seeks to welcome all international residents of Andorra, says the secretary of the organization John Pinnell