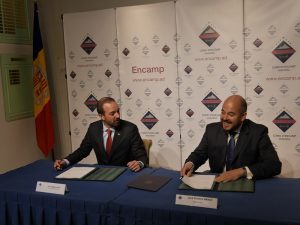 The government of Andorra will spend 2 million euros for the heliport construction. The project is planned to be completed in 2019, said the Minister of Territories of Andorra Jordi Torres during the signing of the agreement with the mayor of Encamp Jordi Torres Arauso on the transfer of land located in the administrative district of Encamp.

The project will be implemented in three phases: the plan for preparing the land for construction, the urbanization of the terrain and the arrangement of the heliport’s infrastructure itself.

The next week there will be a contract competition. The authorities say that the work will start this year.

The agreement provides the transfer of the land on a non-reimbursable basis, and the government of Andorra will undertake the preparation and implementation of the construction of the heliport.

The minister and the mayor said “the Tresoles land for heliport meets all the requirements”.