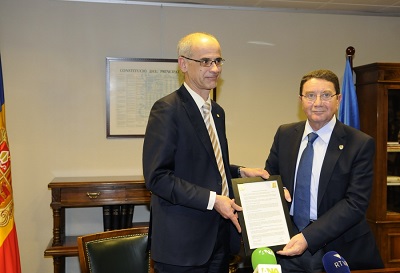 The General Secretary of the UNWTO (World Tourism Organization) Talib Rifai handed a welcome letter of  UNWTO to the head of government of Andorra Antoni Martí. Talib Rifai is in Andorra now in connection with the opening of the 9th World Congress of winter tourism. The official ceremony was also attended by the Minister of trade and tourism of Andorra Francesc Camp and the executive Director of UNWTO Márcio Favilla.

In its letter UNWTO urges governments to position tourism as an engine of economic growth, and also as a phenomenon contributing to the solution of many problems of the modern world.

Taleb Rifai congratulated the Prime Minister of Andorra with the success of the promotion of national travel ideas of the country. For his part Antoni Martí said that “today tourism is one of the main components of the economy of Andorra and an example of national cohesion”.

The World Tourism Organization (UNWTO) is the United Nations agency responsible for the promotion of responsible, sustainable and universally accessible tourism.

As the leading international organization in the field of tourism, UNWTO promotes tourism as a driver of economic growth, inclusive development and environmental sustainability and offers leadership and support to the sector in advancing knowledge and tourism policies worldwide.

UNWTO encourages the implementation of the Global Code of Ethics for Tourism, to maximize tourism’s socio-economic contribution while minimizing its possible negative impacts, and is committed to promoting tourism as an instrument in achieving the Sustainable Development Goals (SDGs), geared towards reducing poverty and fostering sustainable development worldwide.

UNWTO generates market knowledge, promotes competitive and sustainable tourism policies and instruments, fosters tourism education and training, and works to make tourism an effective tool for development through technical assistance projects in over 100 countries around the world.