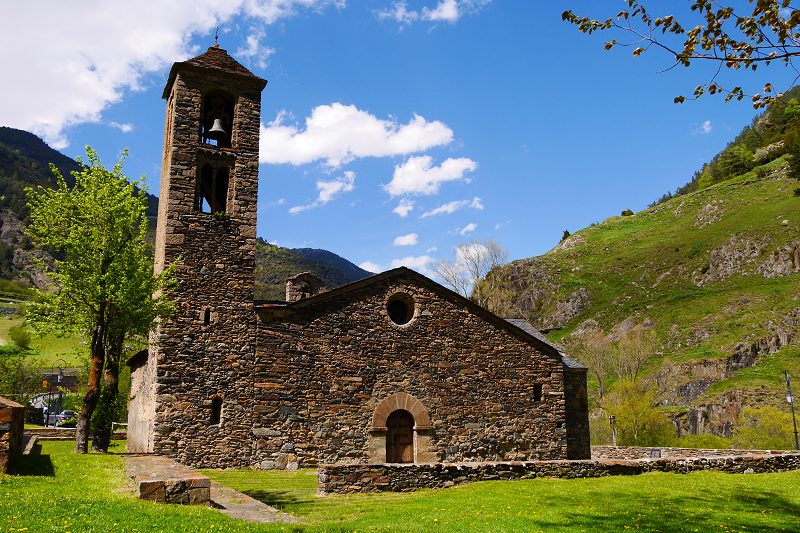 Best business to do in Andorra

After the adoption of the law 10/2012 “On Investments”, which allowed non-residents to become 100% owners of companies, Andorra joins the list of the best countries for doing business in. After only three years of the law being adopted, according to the International Living Index, Andorra is on the list of the 15 countries with best business conditions.

The rate of income tax for the population in Andorra is fixed at 10%, which is also one of the lowest in Europe. If the taxpayer’s income per family is not more than 24,000 euros per year, he may NOT pay income tax.

The State Secretary of the Government of Andorra on economic development, Josep Maria Misse, reported to all-andorra.com: “by 2016 the Government of Andorra had already received 1,380 applications for investments in the amount of 193 million euros. Applications worth 175 million euros were approved”. Some companies have already been established and have started working, and by now about 91,000,000 euros have been invested in the Andorran economy. The main investments, according to Josep Maria Misse, in the amount of about 60% came from Spain and France for the first 5 years. However, 20% of investments of this size began to come from Switzerland and Germany in 2015.
__________________

According to the Government, the main trends in Andorra’s economical development are apparant in investments in the opening of a casino in Andorra, the development of logistics through the construction of a heliport and the launch of commercial flights in an airport in neighboring Spain (10 km from the border with Andorra), capable of having international flights.

In addition, the Government of Andorra names the development of a system of “nanotechnology medicine”, IT technologies, know-how technologies (including “scientific clusters”) and private educational infrastructure.

Today Andorra is the best healthcare system in the world, according to the rating of the leading medical journal The Lancet.

Investments in education: in 2016 a branch of the largest international school of hotel business and tourism, Valel, was opened in the Encamp district of the Principality.

Currently, Andorra is the only country in the world whose experience is used in the educational program of GEFI (UNESCO) due to the presence in the country of 3 simultaneous systems of education – Andorran, French, Spanish.

To develop its own education system, the government of Andorra intends to gradually increase the funding given to the University of Andorra in the next 5 years by 30%.

One of the most promising investment opportunities in the economy of Andorra in recent years is investment in the class A office constructing sector. The rapid growth in the number of new companies has revealed a serious absence of quality office space.
__________________

Where to invest money? Best business ideas in Andorra

Andorra is one of the richest countries in the world. According to the World Bank, the principality is in the top 20 countries with the largest GDP per capita. This indicator in 2015 was 35,785.50 thousand euros (Statistics Department of Andorra). According to the International living index, Andorra ranks 12th in the world in terms of level and quality of life.

The modern economy of Andorra is built on 3 basic principles: high-tech banking services in the sphere of private banking, mountain skiing and tourism, shopping:

1. Private banking. Under the management of 5 banks of Andorra (with a population of about 70 thousand people), assets are currently worth almost 40 billion euro. According to various ratings, the banks of Andorra are included in the list of the highest-quality banks in the world in the field of private banking.

2. Alpine skiing and tourism. Andorra is the most visited country in the world in terms of the number of tourists per capita, according to World Bank data for 2016. Andorran ski resorts are included in TOP 15 best resorts in the world. In the summer, tourism in Andorra doesn’t die but it transforms into a cycling (including Tour de France), mountaineering and hiking destination (almost 30% of the country is made up of national parks protected by UNESCO). In total, Andorra, with a population of about 70,000 people, welcomes more than 8 million tourists a year.

3. Shopping. Currently Andorra has the lowest VAT rate in Europe (4.5%) which is valid for all types of goods and services. It is this reason that makes it the capital of European shopping, and more than 3 million Spaniards and French people visit Andorra every year on shopping tours.

In terms of Foreign Investment, a new Law 10/2012 was approved on the 21st of June 2012 which came into force on the 19th of July 2012. The Law permits 100% liberalization of investment in all sectors and simplifies the process of incorporating companies to accelerate the market in the short term and open the doors to talent and foreign investment, reviving and strengthening the economy of Andorra by way of diversification, competitiveness, promoting innovation initiatives and a wise use of tax differential.

This new competitive model as a strategic tax platform, has been created to attract foreign investment start-ups, create jobs and wealth, focusing on sectors and recruitment to those businesses that generate higher added value and growth.

This are the aims Andorra has for investments:

1. Provide a good service to established investments and potential investors, providing support to potential investors at all stages: pre-investment, investment and post-investment.
2. Promote an adequate investment climate that encourages investment, identifying the needs of potential investors and investors already established and suggesting measures to meet those needs, strengthening relations with associations and institutions related to foreign investment.
3. Disseminate and promote a competitive country image associated to Andorra, including a modern and innovative view, increasingly internationalized and provided with adequate human and technological resources to the process of globalization of markets and the economy.
4. Establish lines of collaboration with all institutions in the State (and also at a local level) which are focused on the promotion and attraction of investments to establish a network of leverage to achieve the above objectives..
__________
*It should be noted that for new external investments an investment project shall be submitted and will be analyzed by the Andorran government who will assess its suitability. If it fulfills all the necessary requirements, the investment will be authorized. However, this requirement does not exist for projects launched by residents in Andorra, whatever their category (active or non-profit) and country of origin is.
__________

All these social and legislative changes involve a number of structural changes that have already begun to develop:
— The Government is working on the project of construction, management and operation of the national heliport in order for it to be operative in the near future, and operating it with various regular lines connecting Andorra, Barcelona, Toulouse, Lleida (Alguaire) or La Seu d’Urgell.
— Andorra wishes to offer its tourists, visitors and citizens commercial offers of excellent quality and well positioned on a level with the major capitals of the world. In this regard, Andorra wishes to attract the leading international retail brands. Thanks to the new fiscal framework and its economic openness, once those leading brands are established in Andorra, it will become a hub of top level shopping in Europe.
— Initiatives that involve changes to the technical training of people linked to the transformation and improvement of tourism infrastructure. The new economic model and future demands of tourists, visitors and new citizens, These initiatives also involve changes to the technical training of people linked to these improvements.
— implementing the most advanced medical technology with no waiting lists and having at its disposal a network of technology – one of the new goals of the Andorran Government is driving Andorra towards the top of medical excellence emulating the Swiss model.
— Promotion of new training centers and high level international scope centers.
— Promotion of research, development and technology in all areas.
— Development of entrepreneurship in terms of recruitment and project financing of projects.
— Alongside initiatives to promote the development of multiple leisure options, special emphasis has been put on gambling so it brings added value. The first step was the Decree of 7th March 2012 which sets up the Agency of the Inter ministerial Commission of Gambling and which in turn has led to the creation of the Office of Gambling. Its aim is to analyze the strengths and weaknesses of this new activity and move on to a new law that includes gambling options like casinos, lotteries, online gambling and betting offline. The project of the gambling Law will be submitted to parliament during this year.

Source: Department of statistics of Andorra 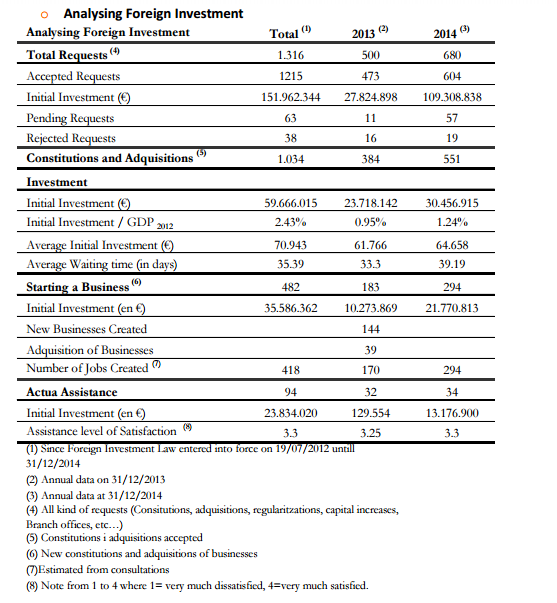 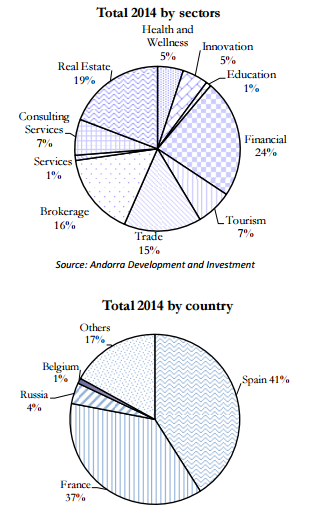 Since the entry into force of foreign investment law in July of 2012,
1,800 companies have been registered by foreign entrepreneurs, who declared an initial investment of € 190.6 million.

The average amount invested by foreign entrepreneurs is 106.000€.
Around 25% are existing businesses acquisitions and over 1,000 jobs have been created.