Caravaca de la Cruz, often shortened to Caravaca, is a town and municipality of southeastern Spain in the region of Murcia, near the left bank of the River Argos, a tributary of the Segura. It is the capital of the northwest Region of Murcia.

Besides being known by the Christian relic, it also has a festival in its honor between 1 and 5 May of each year, declared of International Tourist Interest in 2004. Along with processions and parades of Moors and Christians, the celebration of Horses of Wine is especially relevant, which now aspires to be the Intangible Cultural Heritage of Humanity by UNESCO. 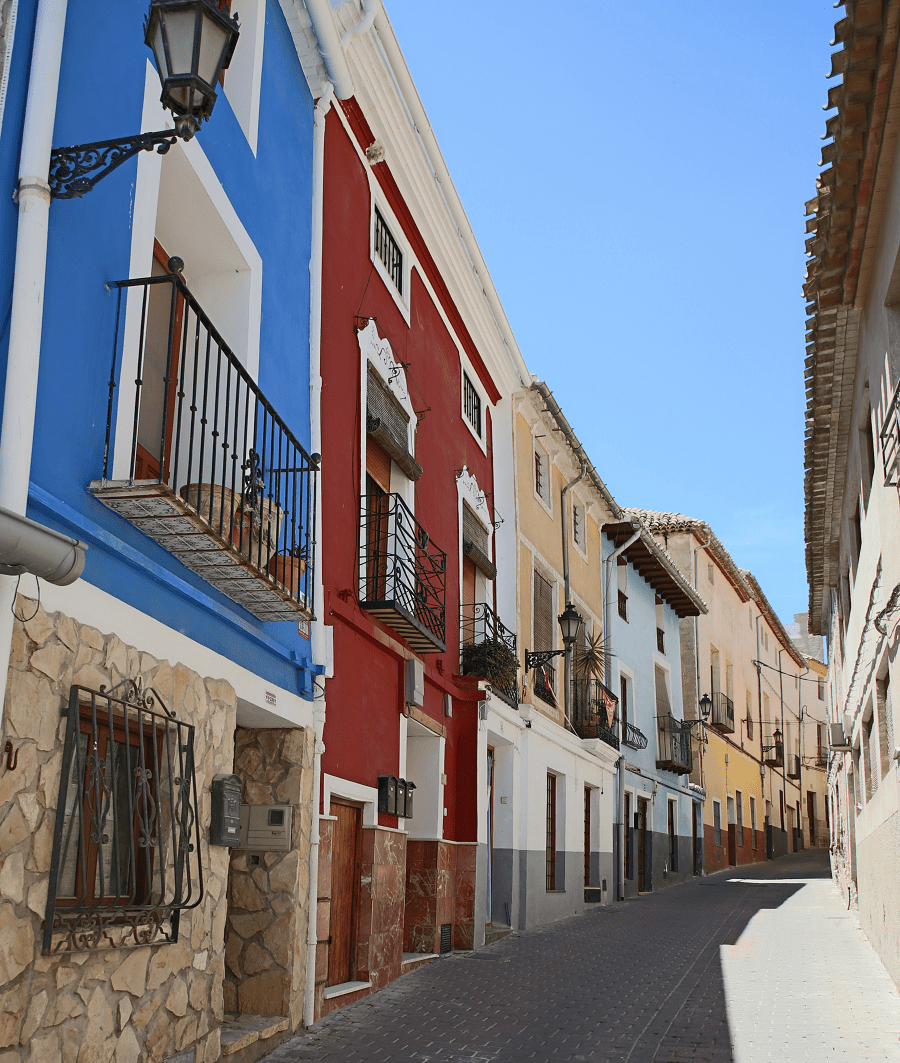 The Neoclassical painter Rafael Tejeo was born in Caravaca.

The Basilica of the Vera Cruz from the 17th century, designed by the important architect Fray Alberto de la Madre de Dios, with an 18th century façade, where the famous Caravaca Cross is venerated. Located inside the Real Alcázar, of Islamic origins (X-XI century); 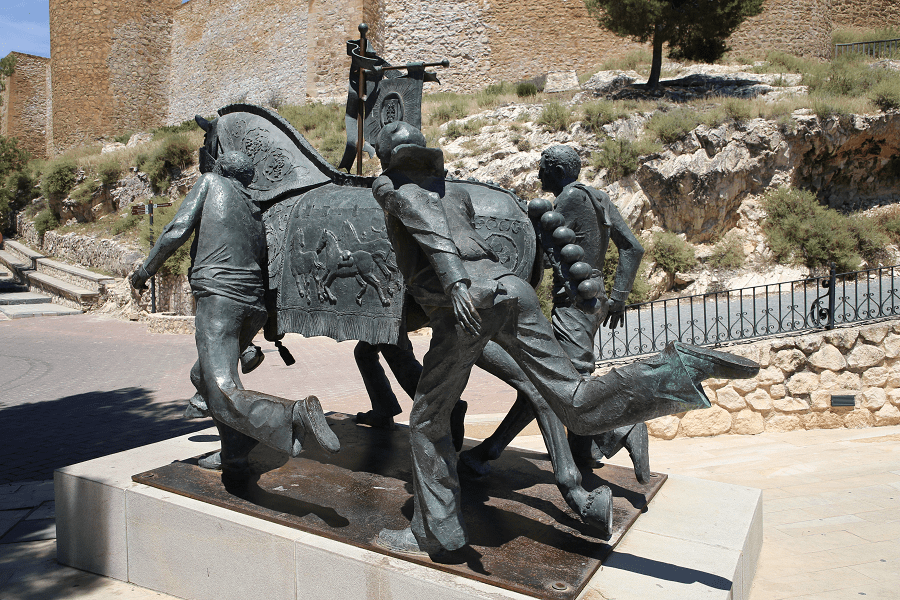 The Parish Church of El Salvador, one of the best examples of Renaissance architecture in the Region of Murcia, within the so-called columnar churches (16th century);

The Parish Church of La Concepción, whose bell tower is known as the Tower of the Shepherds. In its interior, the Mudejar polychrome wood coffered ceiling (16th century) as well as the altarpiece of the main altar that houses the image of the owner, the Immaculate Conception, the work of the Caravacan sculptor Francisco Fernández Caro (1792) stands out. 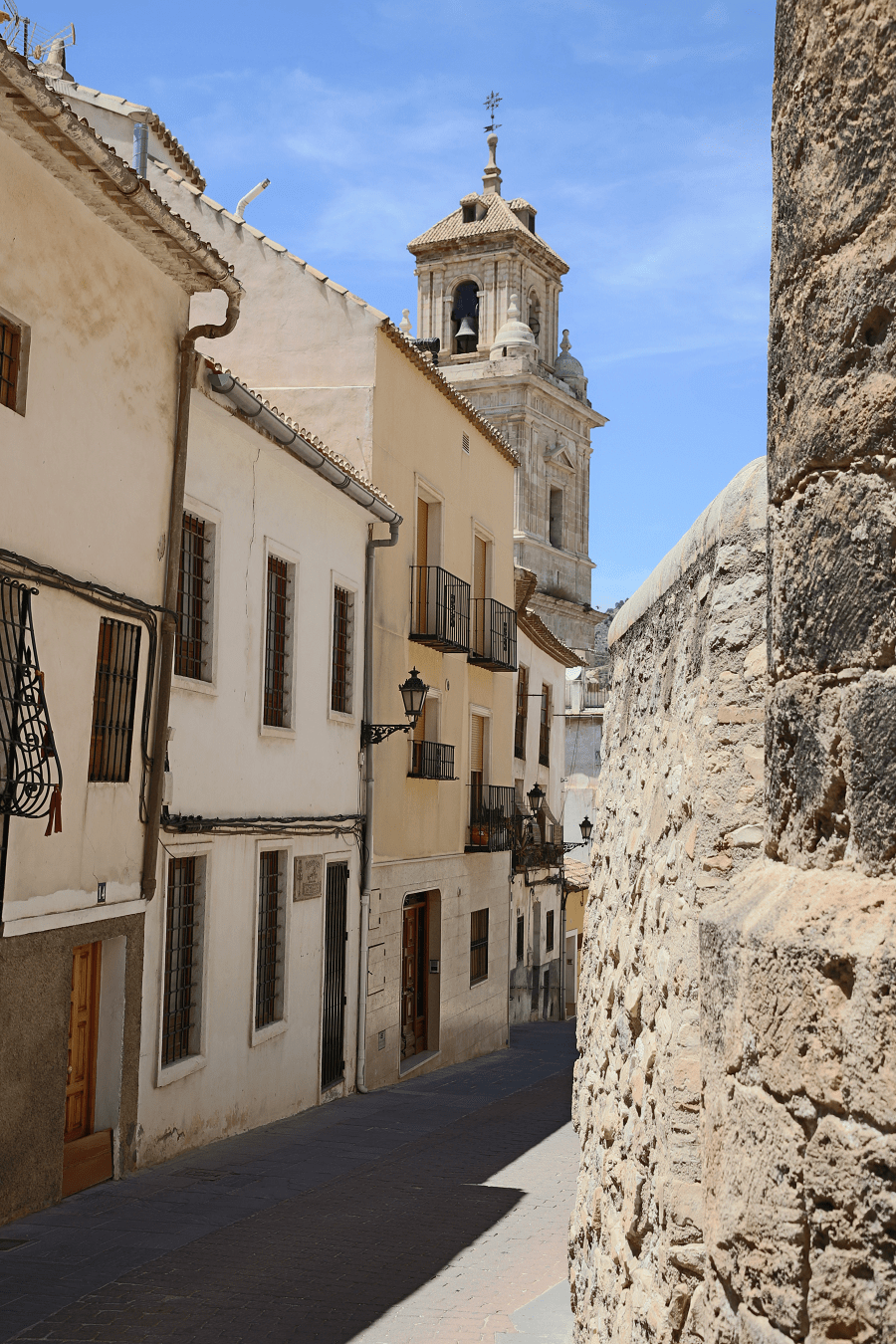 The Church of the Society of Jesus, completed in the 18th century, was owned by the Jesuits together with the annexed convent until its expulsion in 1767. From then on it went from a hostel to a garage. At present, the church is used as a municipal cultural center.

The Convent of Madres Carmelitas Descalzas and Iglesia de San José, founded by Santa Teresa de Jesús in 1576, has a Rococo-style convent church. The town is part of the Footprints of Santa Teresa, a pilgrimage, tourist, cultural and patrimonial route that brings together the 17 cities where Santa Teresa de Jesús left her “footprint”.

The Carmelite Fathers Convent of Caravaca de la Cruz, founded by San Juan de la Cruz in 1586, although built in the 17th century with a project by the architect Fray Alberto de la Madre de Dios. 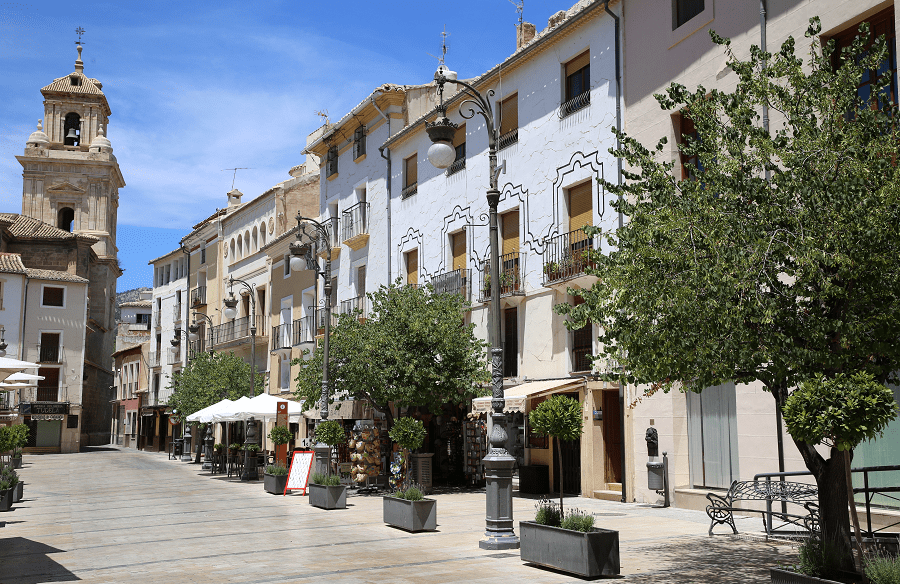 The Convent and Church of Santa Clara, founded in 1609 by Mrs. Catalina de Robles and Mr. Ginés de Perea, Mayor and Notary of the Holy Office of the Kingdom of Murcia. It has two clearly differentiated buildings: Church and Convent that were built in what was once the Hermitage of the Apostle San Bartolomé and the first site of the Society of Jesus in the City. The church, with very sober lines as corresponds to the Franciscan spirit, was completed around 1718.

The Town Hall, in baroque style, and whose original layout corresponds to Jaime Bort.

El Templete or Bañadero, a baroque-style building with a hexagonal plan inscribed in a circumference, in which the bath of the Santísima and Vera Cruz de Caravaca is celebrated every May 3, a ritual act that has been held since 1384.

The Plaza de Toros, built on an old Franciscan convent, which was inaugurated in 1880 and a neo-Mudejar façade was added to it, with the remodeling of 1926. 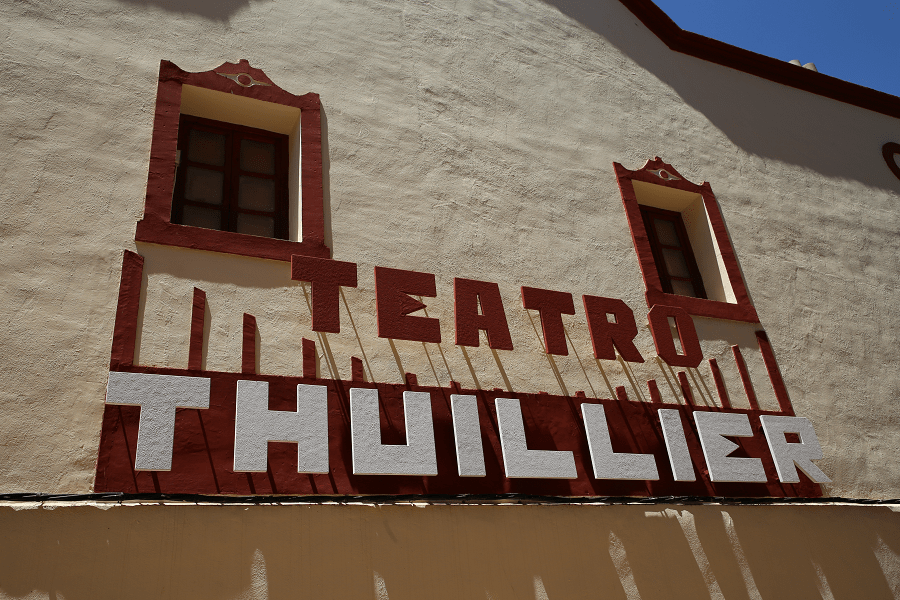 Around the Cerro del Castillo is the oldest neighborhood of Caravaca, the medieval quarter. From the 12th and 13th centuries is when a fortified nucleus of relative importance begins to form. The town used the north, east and west slopes of the hill for its situation, taking advantage of the softer part of the natural slope. The neighborhood has the typical irregular and disorderly structure in which narrow streets intersect, small squares open and dead ends appear. It was surrounded by a wall of which remains are preserved in some streets.

Around the streets Puentecilla, Mayor, De las Monjas, Rafael Tejeo, Gregorio Javier and the Plaza de los Caballos del Vino are located numerous emblazoned mansions (Palacio de los Uribe from the 16th century, Palacio de la Encomienda, etc.), of the time when Caravaca left its walls and expanded across the plain after the end of the border with Granada.

Hermitages of Santa Elena, San Sebastián and de la Reja: The first is located in the Plaza de los Caballos del Vino or del Hoyo presided over by a commemorative sculpture of this very particular festival. The last one has a magnificent viewpoint of the city. 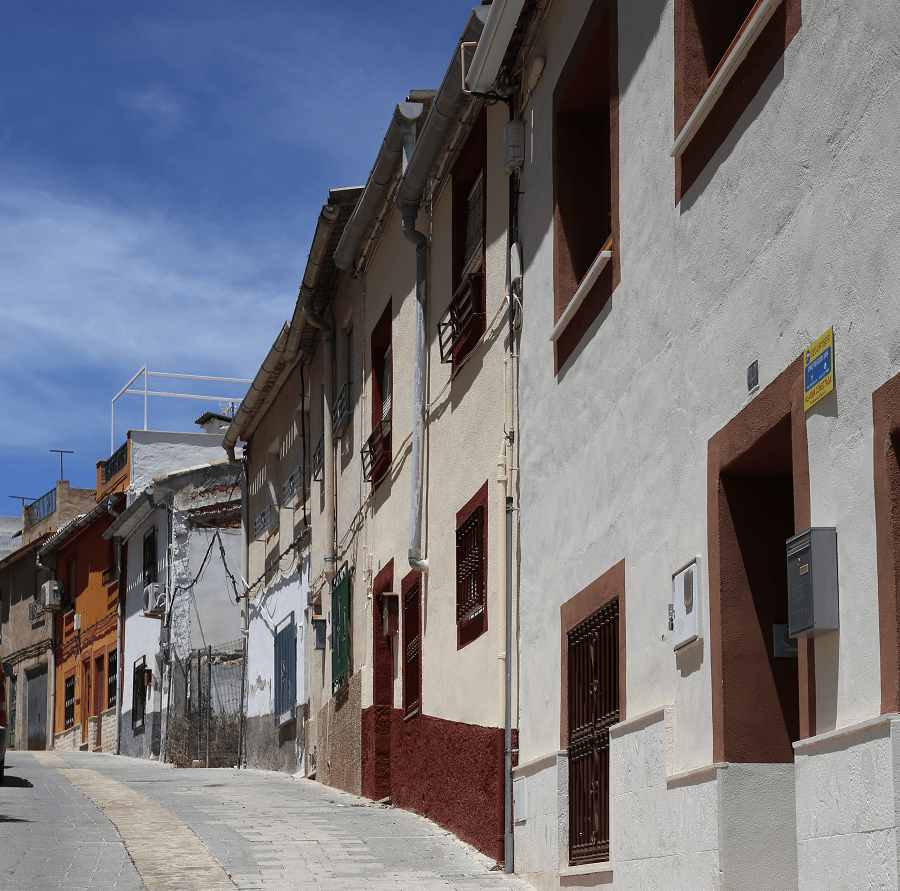 Torre de los Templarios, in the area of ​​Fuentes del Marqués, from the 16th-17th century, where the Cueva del Marqués is also located, some caves excavated by the Arab settlers for tanning skins or distilling aromatic plants. 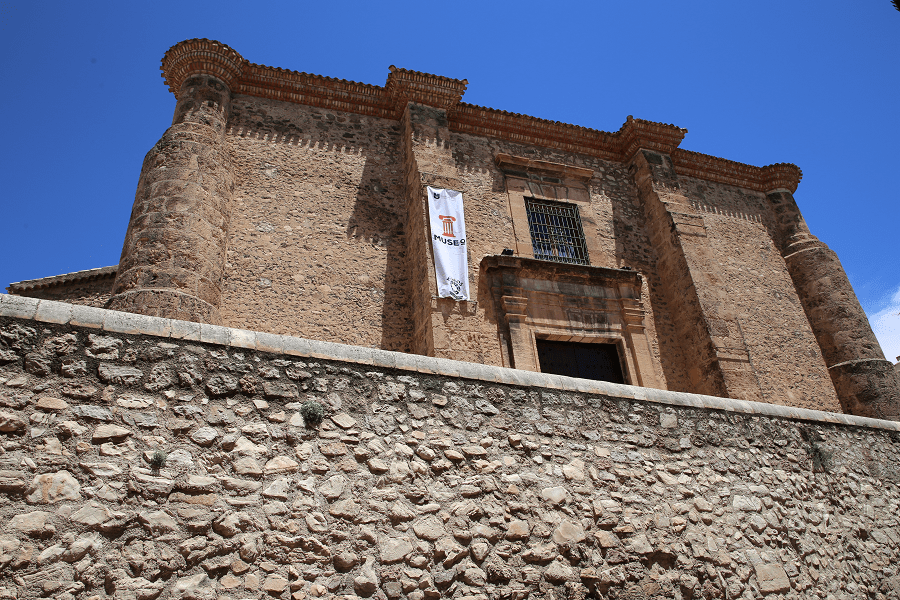 Festival Museum. Located in the old Casa de los Uribe, in C / De las Monjas 19. The costumes of the Christian groups and the Moorish cabal that parade in the festivities that, in honor of the Stma. and Vera Cruz, are celebrated from May 1 to 5, as well as the atalajes with which the Caballos del Vino are harnessed on the morning of May 2.

Municipal archaeological museum. Located on the Cuesta del Castillo, in the historic center and within a building of great heritage value, such as the old church of Ntra. Sra. De la Soledad. It collects pieces of great value, the result of the numerous finds made in the excavations carried out in various archaeological sites, especially those carried out in the Iberian-Roman complex of “La Encarnación”. 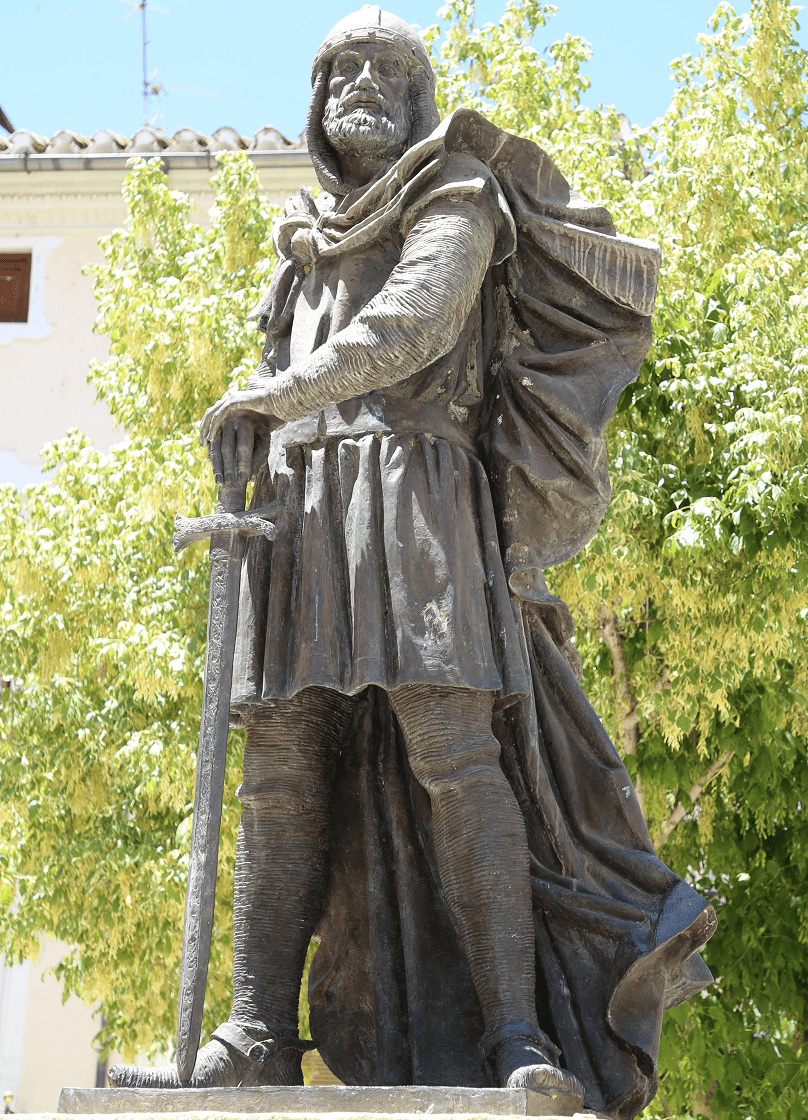 Barranda Museum of Ethnic Music. Located in the hamlet of Barranda. It houses one of the world’s most important collections of musical instruments, it contains artisan instruments from the five continents, manufactured, in most cases, by the instrumentalists themselves.

Carrilero Museum. Dedicated to the Caravacan sculptor José Carrilero Gil, National Sculpture Prize and Medal of the University of Rome. In various floors and rooms you can see the evolution of his artistic work. Outside the Museum, in front of the entrance, you can also see three figures of the sculptor. 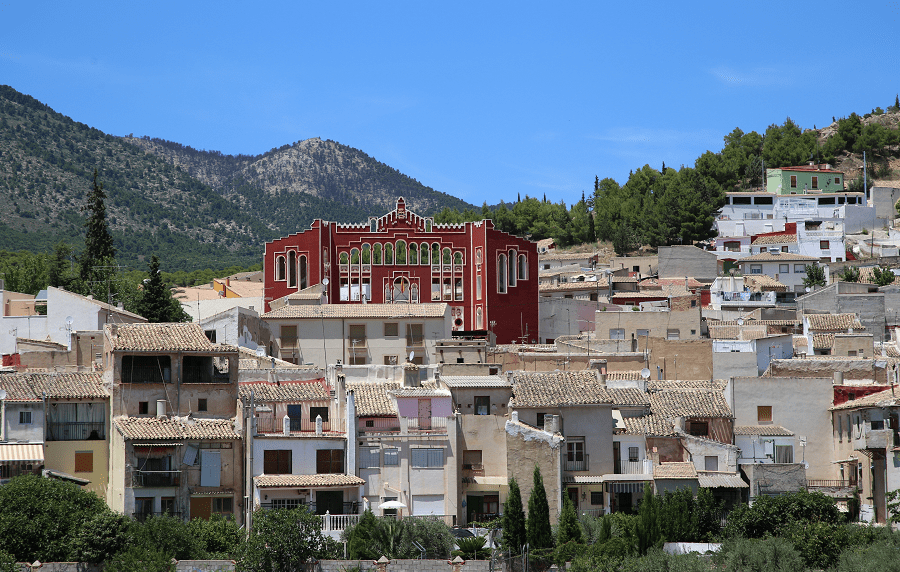 Wine Horse Museum. Installed in the old Muñoz Melgarejo palace from the 18th century, on Calle Gregorio Javier 21, through its various rooms and audiovisuals, the roots of the celebration of the Wine Horses, candidate for Intangible Heritage of Humanity, are disseminated.

Thuiller Theatre, built in 1843 on the old “Court of Comedy”. In 2006, after being closed several months, completed the last renovation of the building, reopening to the public in April of that year with the play El hombre de Central Park, by Carlos Larrañaga.

Besides this theater, the Culture House and the cultural center built in the Church of the Society of Jesus are the places where cultural activity centers, film and artistic community.

One of the most established cultural events is the Theatre Week Caravaca de la Cruz, who in 2010 reached its thirtieth edition. It is now done at the end of July each year in the Plaza de Toros in the town.

Since December 2010 is being carried out work on the Multifunctional Center and Auditorium of Caravaca de la Cruz, which has been controversial for its potential visual impact on the Old Town area, although from the drivers of argues that this work will be minimal and that the building itself will be a new attraction for the municipality. 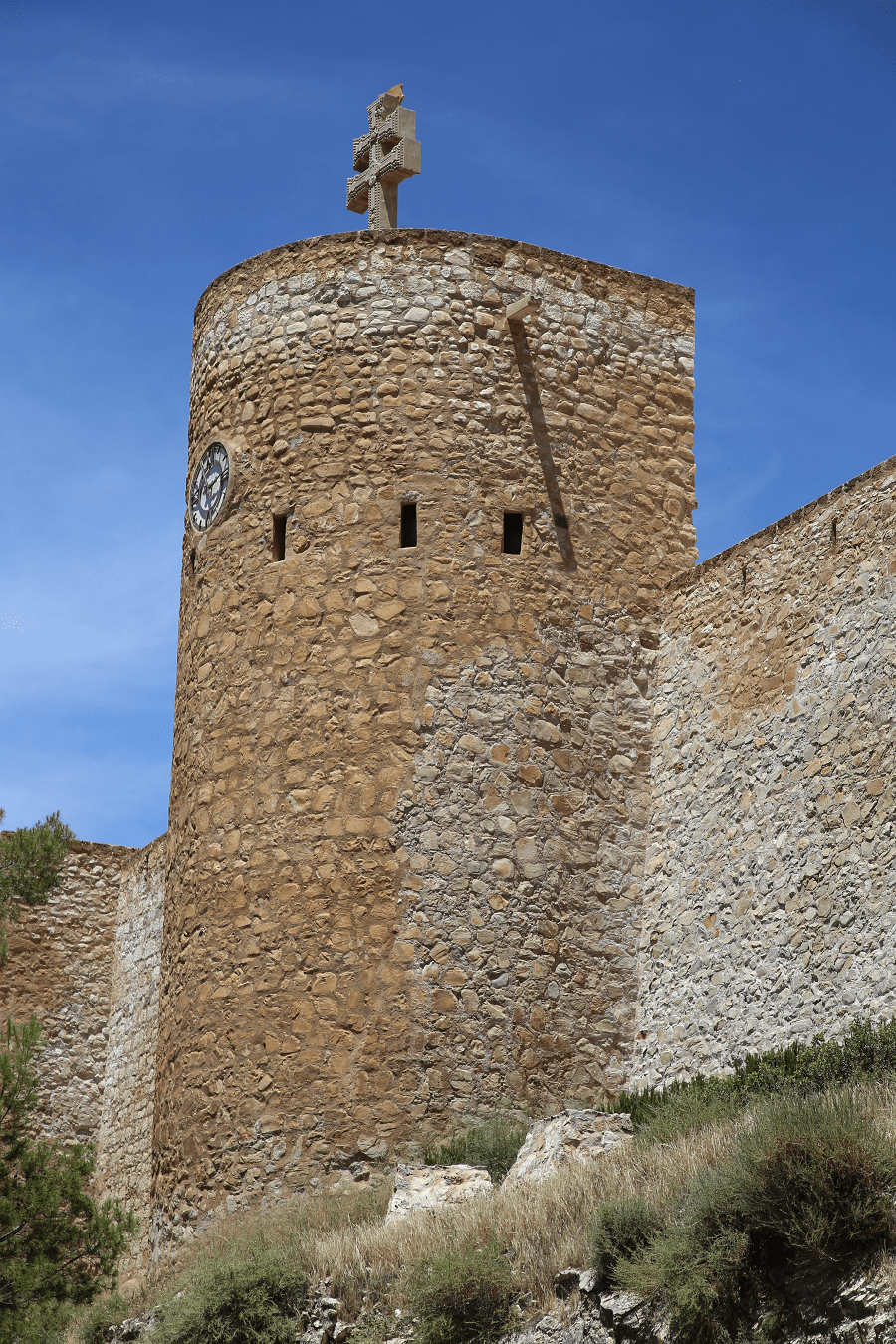 Caravaca’s cuisine is very varied and similar to the entire natural region that surrounds it, from Santiago de la Espada (Jaén), Nerpio (Albacete), Topares (Almería), La Puebla de Don Fadrique (Granada), and within the province of Murcia, towns such as Avilés and Coy in the municipality of Lorca, Moratalla, and Cehegín. The dishes and the way they are cooked find many similarities. These common elements have made foods such as flour crumbs, called migas ruleras in Caravaca, to be prepared in the same way. Common are the numerous types of stews, the rags, gurullos, roasts of lamb, sausages of the slaughter, etc. 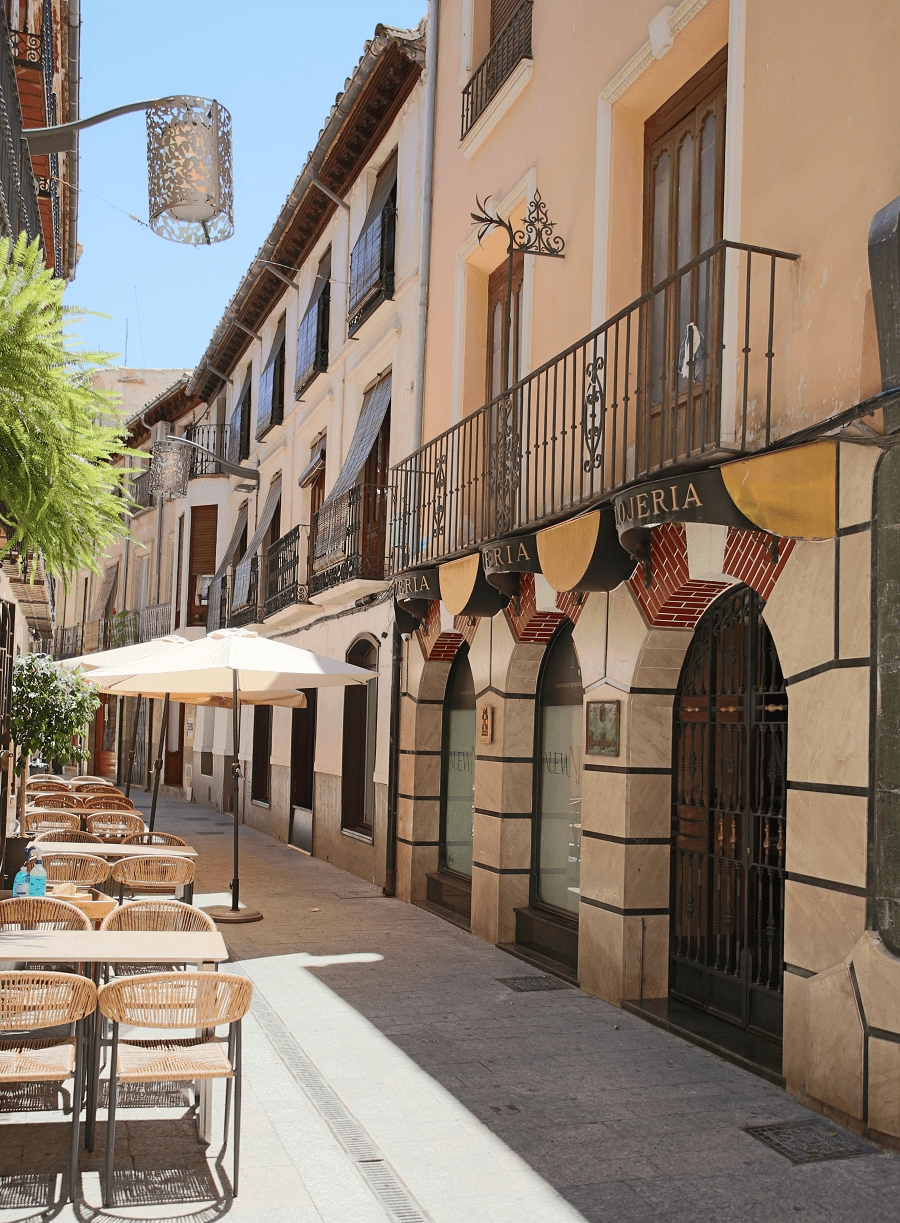 Particularly in Caravaca de la Cruz are typical the tartera (roast lamb in the oven, with potatoes, onion and pine nuts), the cobblestone (possibly the most typical dish of Caravaca made with rice, white beans and dried cod) or rice with rabbit and typical Murcian snails. Also typical is the country chicken rice, the marrana death pot (with beans, potatoes, chickpeas, turnips, blood sausages, ear, back bone and tail), rags (also very typical, it is made over low heat with flour, water , oil, black pudding, garlic, paprika and saffron), ajopatata (with potatoes, garlic, dry red pepper, salt and olive oil), numerous stews (the most typical are spinach, celery, gypsy, rice, etc. ) and migas (the best-known dish in Caravaca and throughout this area prepared with flour, water and olive oil).

The traditional sweets are the Caravaca yolks, an exquisite snack made with fresh egg yolks and sugar, this mixture is cooked, once cold it is divided into small balls, which are dipped in caramel or chocolate. The alfajor, sweet of Arab origin, made of honey, almonds, hazelnuts and wafers. 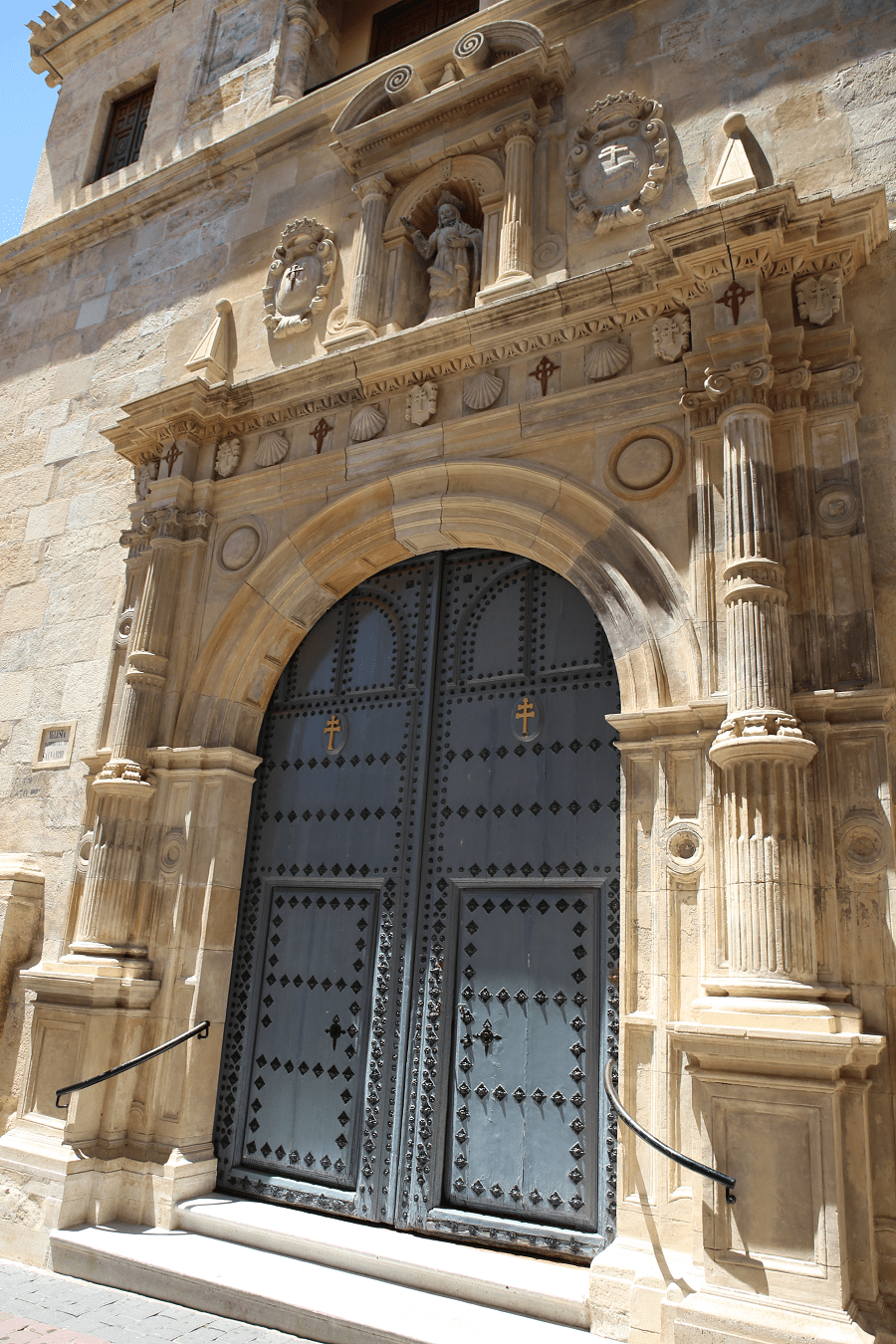