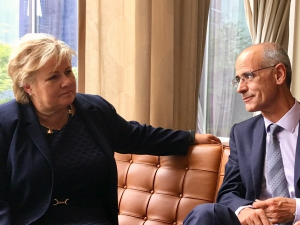 The Head of the Government of Andorra Antoni Martí plans to visit Norway for consultations on the functioning of the European Free Trade Association (EFTA). He made this statement after a meeting with Norwegian Prime Minister Erna Solberg, which took place at the UN headquarters in the framework of the General Assembly. The Minister of Foreign Affairs of the principality Maria Ubach will join the delegation of the head of the government of Andorra.

Norway, Liechtenstein, Iceland and Switzerland are part of The European Economic Area (EEA) and members of the European Free Trade Association. The Association Agreement, which Andorra and the EU intends to sign, is similar to the one that operates in these countries.