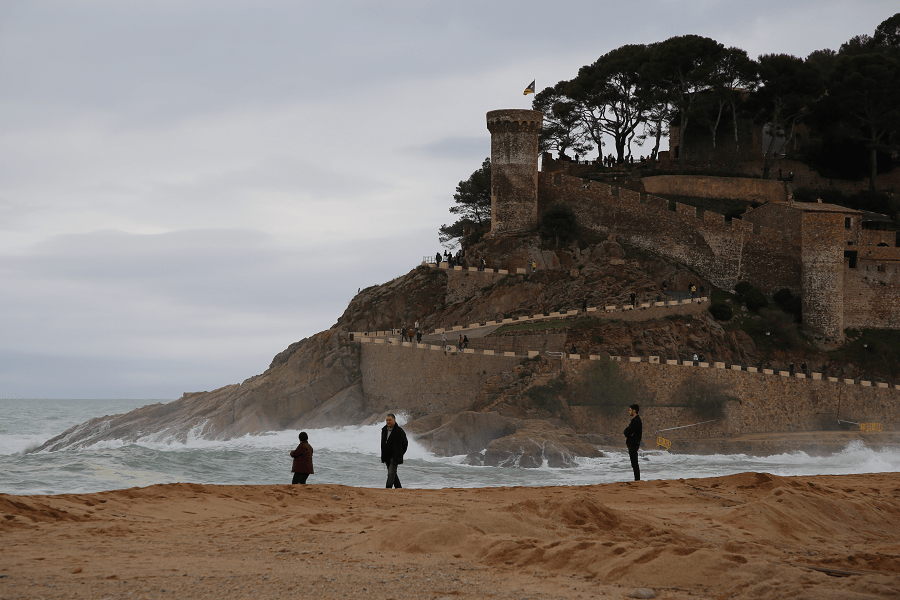 Tossa de Mar (cat. Tossa de Mar) is a town and municipality in Spain, the region of La Selva, Catalonia, simply called Tossa until 1985. It is part of the so-called Selva Marítima and borders with the counties of the Baix Empordà and Gironès, by the municipalities of Lloret de Mar, Vidreres, Caldes de Malavella, Llagostera and Santa Cristina d’Aro.

Tossa de Mar is one of the emblematic villages of the Costa Brava of the Mediterranean resorts of Spain.

The beauty of its beaches and forests and its historic and cultural heritage make this place a ‘must see’.

Together with Blanes and Lloret de Mar, they form a territorial and tourist unit that has more than 80,000 residents and welcomes over 1,500,000 tourists a year.

Tossa de Mar is in a valley, isolated from the neighboring municipalities by the tops of the Massif of Cadiretes – Ardenya, (Puig de Cadiretes of 519 m, Cerro de Rosell of 340 m and others) where it is fully integrated (more than 2,600 ha are within the scope of the PEIN -Plan of Natural Interest Areas of the Massif of Cadiretes). The relief is abrupt, with slopes grade greater than 20%, and the proximity of hills to the sea determines a steep coastline with many cliffs and small coves, many of which are difficult to access. 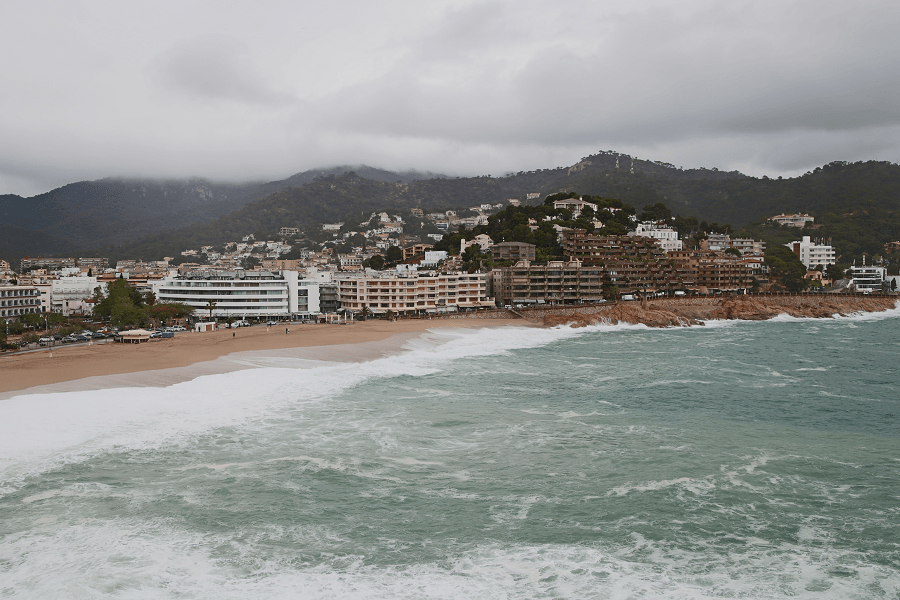 Tourism, attractions and places of Interest

The Roman villa of Ametllers is one of the most important in Catalonia. It is of large dimensions, and was founded in the 1st century BC and remained active until the 5th or 6th centuries AD. It consists of two parts. The upper part was the residential area, a luxurious mansion where the owners lived and which had its own terrains. There are mosaics from the 3rd-4thcentury, some conserved in situ and others in the Municipal Museum. 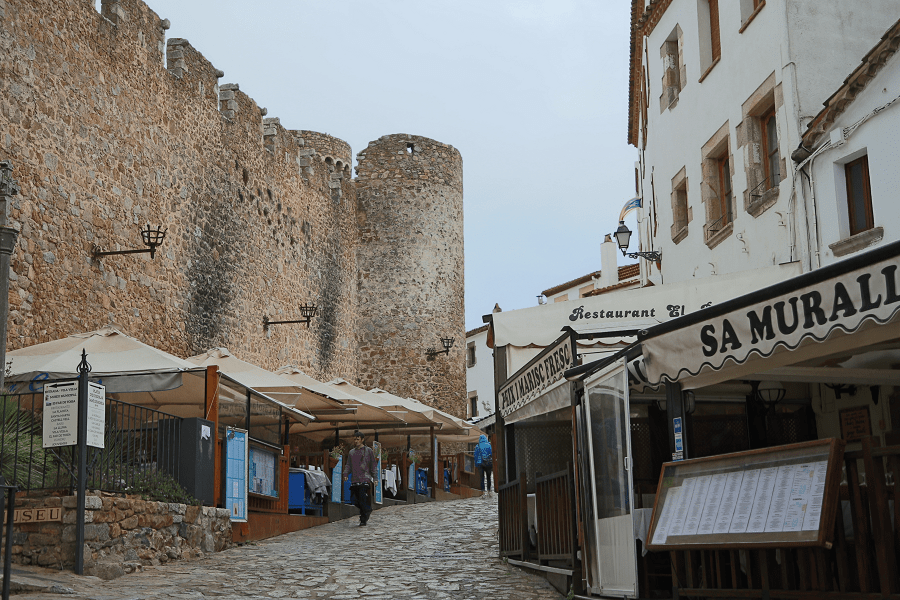 The lower part, separated by a five-meter wall, was the production area, with four wine presses and a cistern where the must was collected. Oil and salt, among others, were also produced there. It was discovered in 1914 by Dr. Ignasi Melé i Farré and several excavations have been carried out since. Through mosaics it is known that around the 5th century it was inhabited by Vitalis. There is also an inscription of the name Turissa, a predecessor to the current Tossa. In the Municipal Museum many finds from the excavations are on display, besides the valuable mosaics. 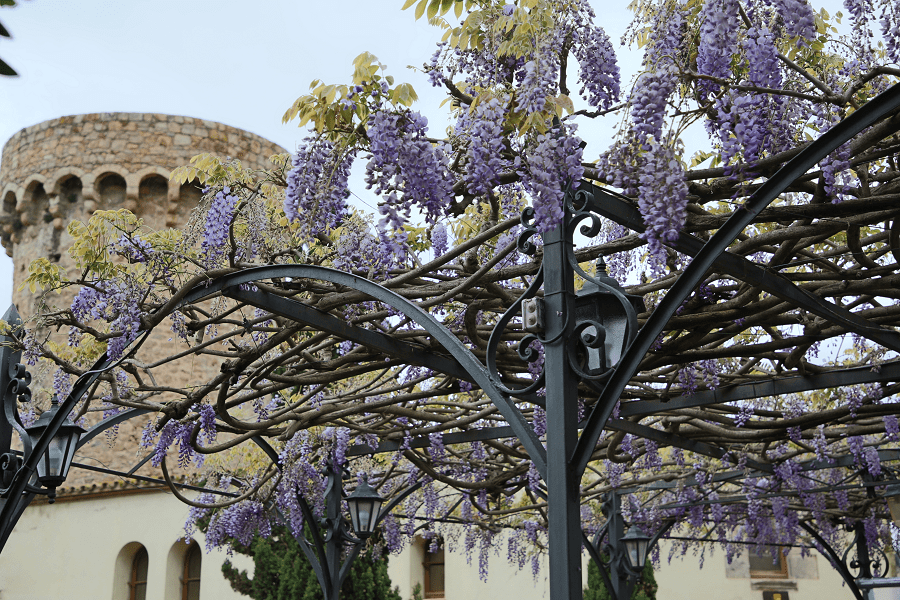 The Old Town of Tossa and its castle is the only example of a fortified medieval town that still exists on the Catalan coast. It was declared a National Historic and Artistic Monument in 1931. It is located within a walled site built between the 12th and 14th centuries as a defense from piracy, almost all of the original perimeter and three large cylindrical towers called Codolar, ses Hores and Joanàs are preserved. 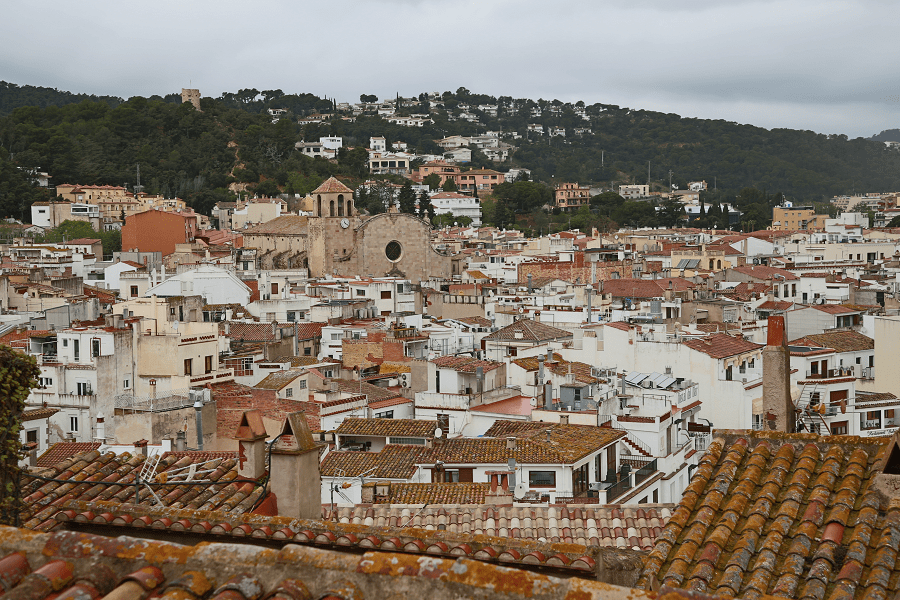 The Municipal Museum of Tossa (MMdT), in the Casa Falguera or Governador (14th century), one of the oldest contemporary art museums (1935), is located in Vila Vella. This museum contains works by great artists such as Marc Chagall, Jean Metzinger, André Masson, Georges Kars, Oscar Zügel, Catalans: Rafael Benet, Josep Mompou, Pere Creixams, Enric Casanovas, Emili Bosch-Roger, among others. Many of them lived periodically in the town, in the thirties, and some even in the post-war period, forming a kind of School of Tossa. 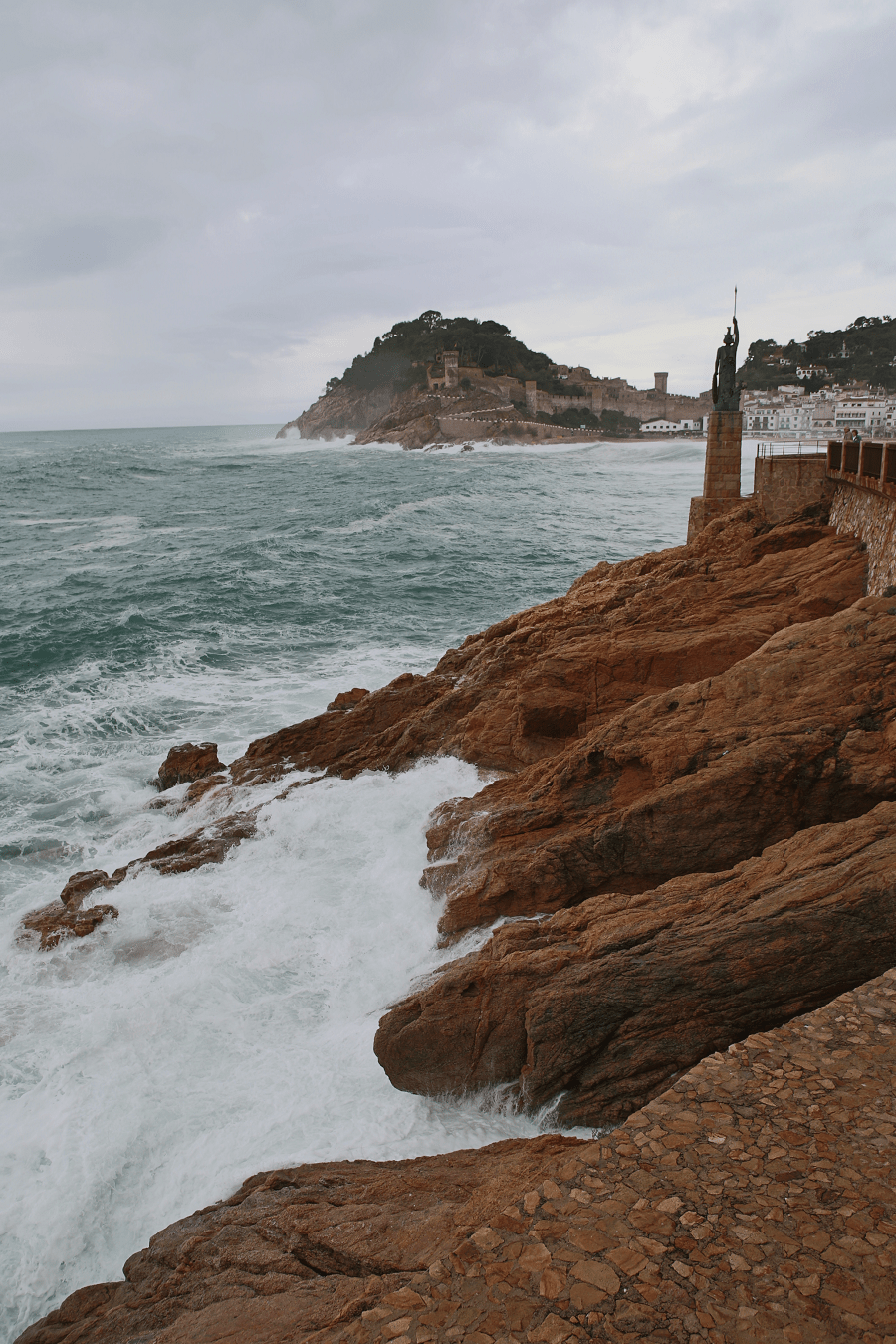 Developed in the 18th century, outside the walled enclosure, by the Roqueta neighborhood, right next to the entrance portal of the curtain wall. In this part stands out the parochial church, a monumental neoclassical building, built between 1775 and 1776, and former Baroque-style Hospital, now the headquarters of the Casa de Cultura. 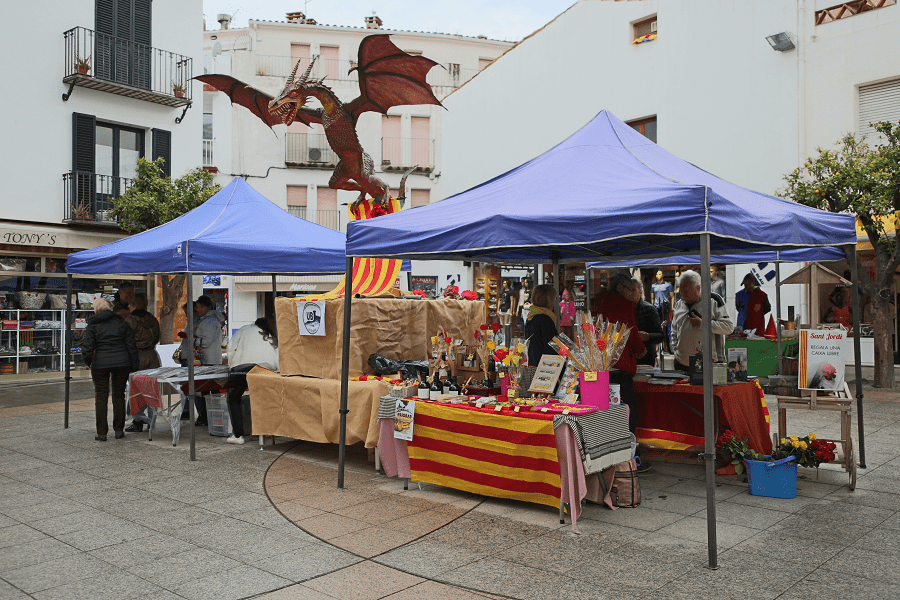 The sanctuary of Sant Grau d’Ardenya rises on the slopes of the Cadiretes massif presiding over the coastline and dominating a splendid panorama of the Mediterranean. Mentioned already in 1411, when Bishop Bernat de Pau (1436-1457) confirmed that an anchoret named Jaume Corbera restored an existing hermitage. Its origin, however, presents several questions: Joseph de Monpalau refers the legend that Saint-Guerau d’Orlhac himself, already dead, appeared to the inhabitants of Tossa inviting them to fund a hermitage in that place to guard his remains. 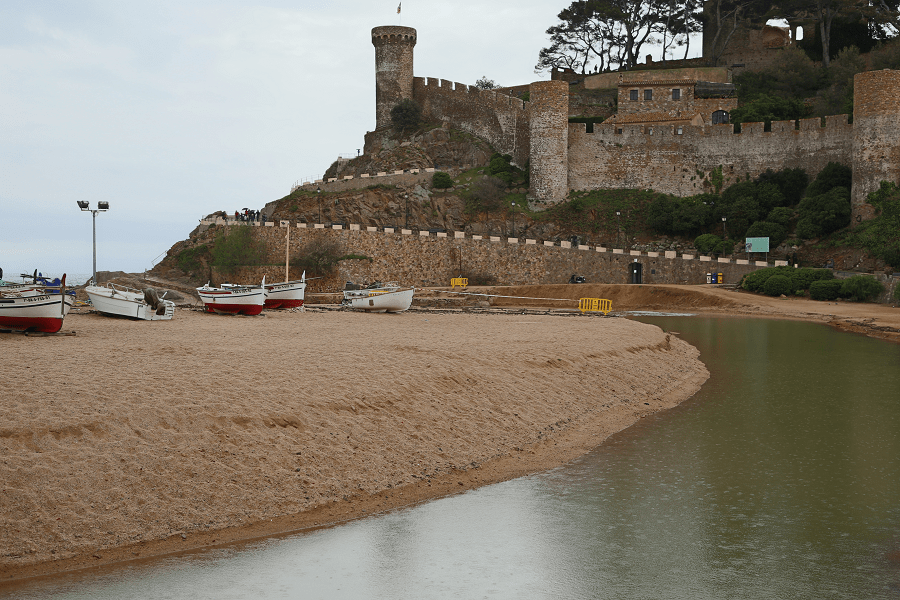 Enric Claudi Girbal attributes its construction to Queen Maria of Montpellier, wife of Peter the Catholic and mother of James I. It deteriorated significantly due to the French War, the current building was reconstructed in 1882. Some researcher suggests the possibility that the sanctuary occupies the same location as the old parish of Sant Lionç, documented in 966 and lost shortly thereafter. A popular event is celebrated on October 13th at the sanctuary. 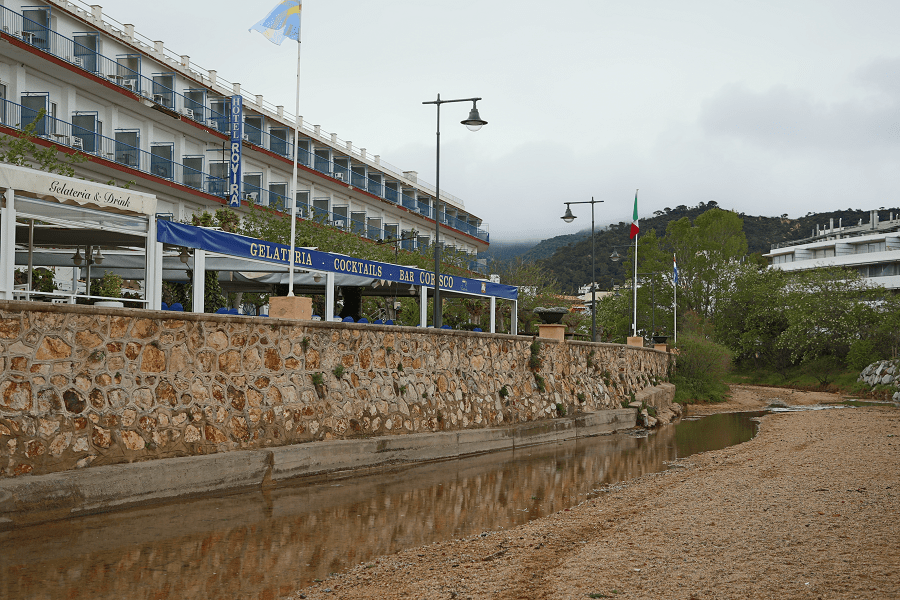 Former hermitage next to the farmhouse with the same name. Almost without a doubt, it was the primitive parish church of Sant Vicenç, documented since the year 996, around which the medieval altarpiece was built thanks to its location away from the dangers of the coast. The current building has one nave and a rectangular apse, with gabled roof and a bell tower. It has a portal with monolithic straight lintel. In July a popular gathering is held there. 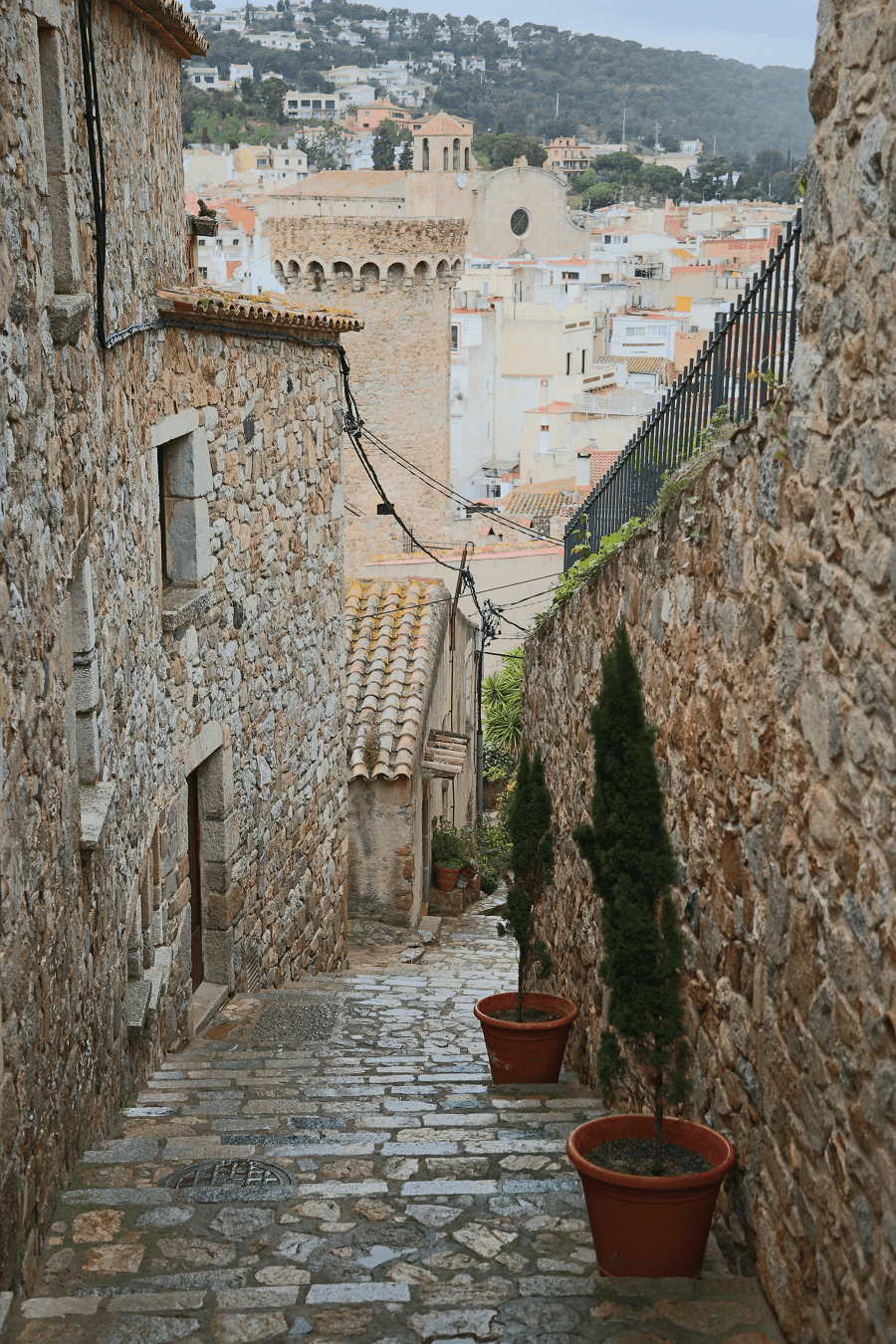 It is one of the most enigmatic places of Tossa. According to tradition it was a hiding place where the people of Tossa of the Middle Ages, centered around the primitive parish of St. Vicenç (currently the hermitage of Sant Benet), took refuge in case of danger before the establishment of the Vila Vella, in the 12th century. 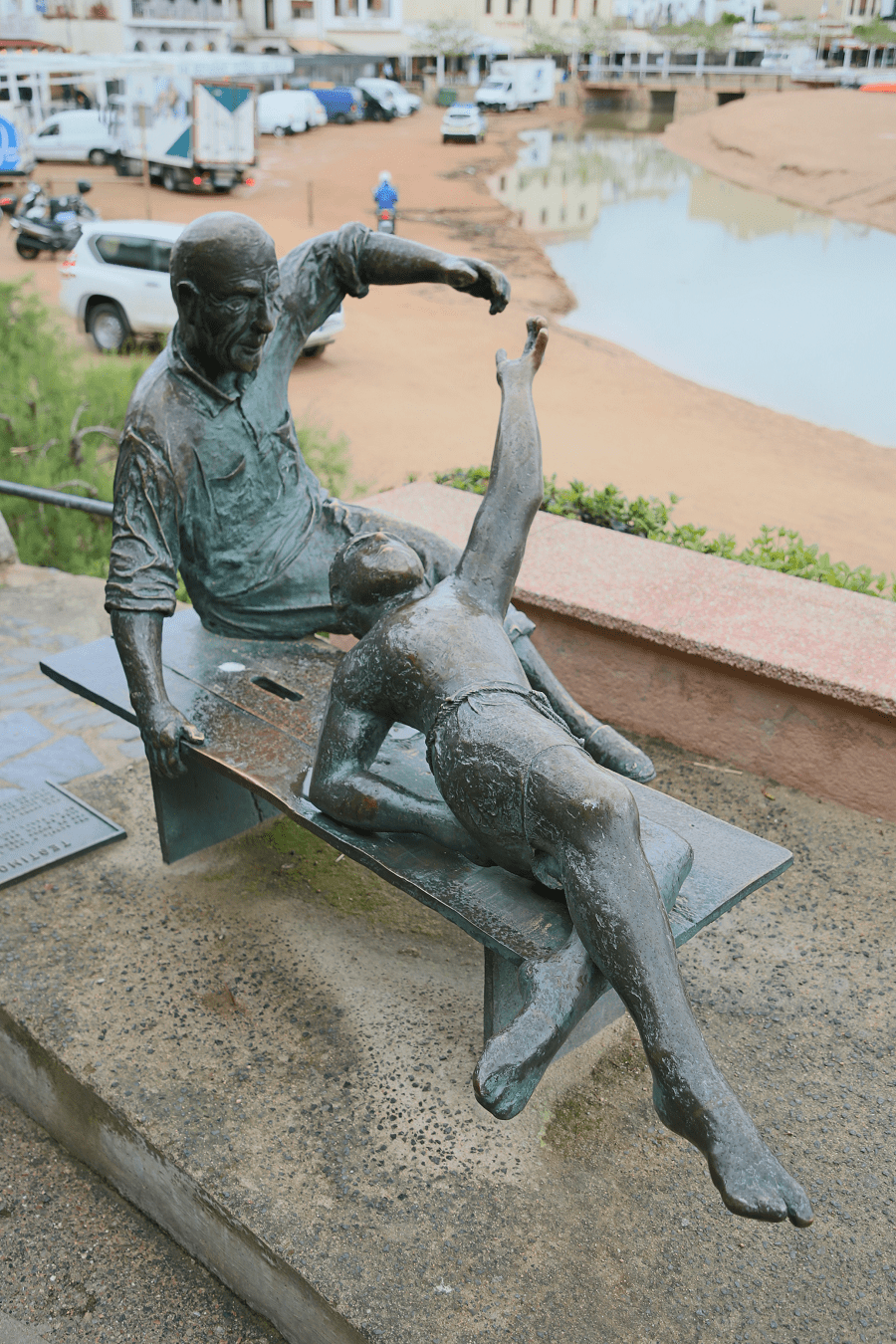 Remains of a small church were found there, the invocation of which is unknown however, and no other indication of human occupation has been found. At the top of a hill near Vilademont, Gorg Gitano, there remains the base of a large rectangular tower that centered the defensive system of those centuries and could serve as a last refuge in case of necessity. 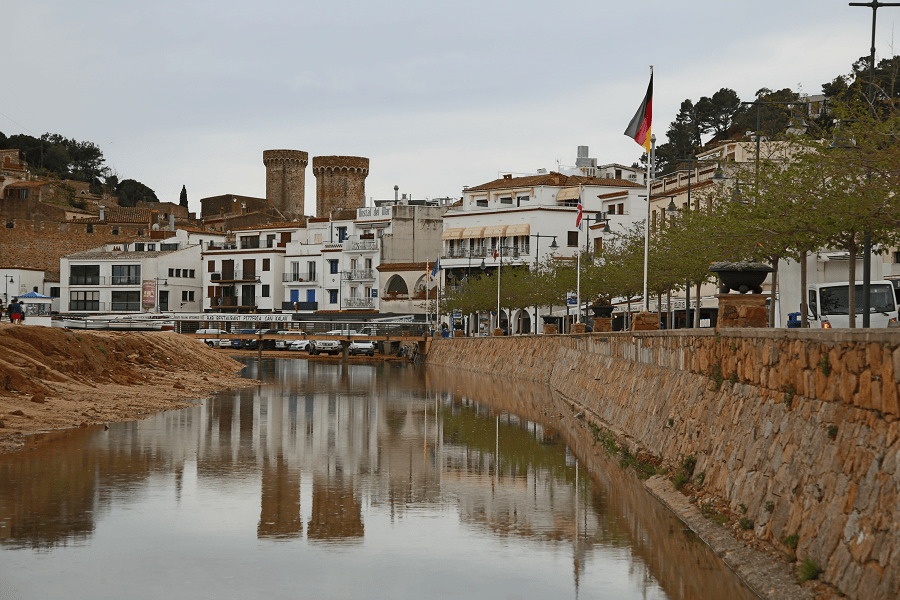 “El Pelegrí” or “El Vot del poble” is a popular tradition of the town of Tossa that is celebrated every January 20th, on the day of San Sebastián, as an ancestral offering of the inhabitants of the town. It consists of a pilgrimage of about 40 kilometers between Tossa de Mar and Santa Coloma de Farners by a representative of the town, Father Pelegrí, and all those who want to accompany him. Compliance with the Vot (the pilgrimage) is confirmed the following day, when Father Pelegrí returns to Tossa and is received by the local authorities, including the Catalan Ombudsman. The Ombudsman is a councilor of the City Council, usually the First Deputy Mayor, who is responsible for ensuring the compliance of the Vot and who reads aloud the documents issued by the civil and religious authorities of Santa Coloma de Farners, confirming Father Pilgrim’s visit on the previous day. 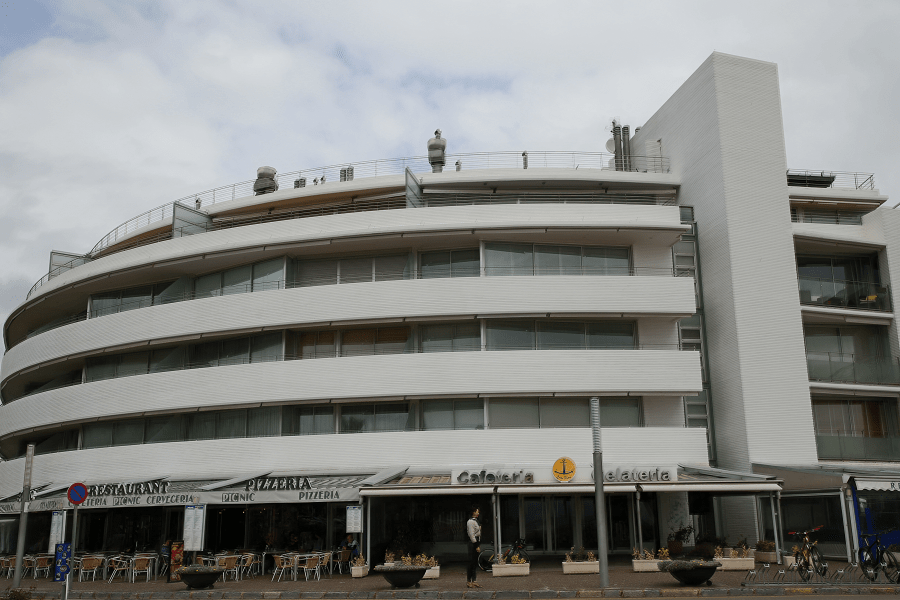 If you take into account the songs that are sung in Tossa in honor of San Sebastián, you can go back to tradition as old as from the beginning of the 15th century:

In the year one thousand four hundred, / according to the faithful history, / was that Villa struck by plague / by express punishment from the sky …

The oldest repeatedly recorded date is 1707, and speaks of the Pilgrim as an annual custom.

According to tradition, when the plague broke down on the town, a woman who decided to flee received a vision of a young man who accused the people of Tossa of the abandonment of the cult place of Saint Sebastian, located in the place known as Creu de Mas Serra, which caused the plague they suffered. The young man made the fleeing woman go back with the relevant instructions to stop the epidemic: hang a slaughtered lamb on the top of the tower and go on pilgrimage to the first hermitage of San Sebastián that they will find in the direction from where the lamb blackens.

This was what the inhabitants of Tossa did: the lamb blackened from the west and the villagers left in that direction. In Santa Coloma de Farners they found the first sanctuary dedicated to San Sebastián and, when they returned, the plague disappeared. In memory of that episode, they decided to repeat the pilgrimage annually. 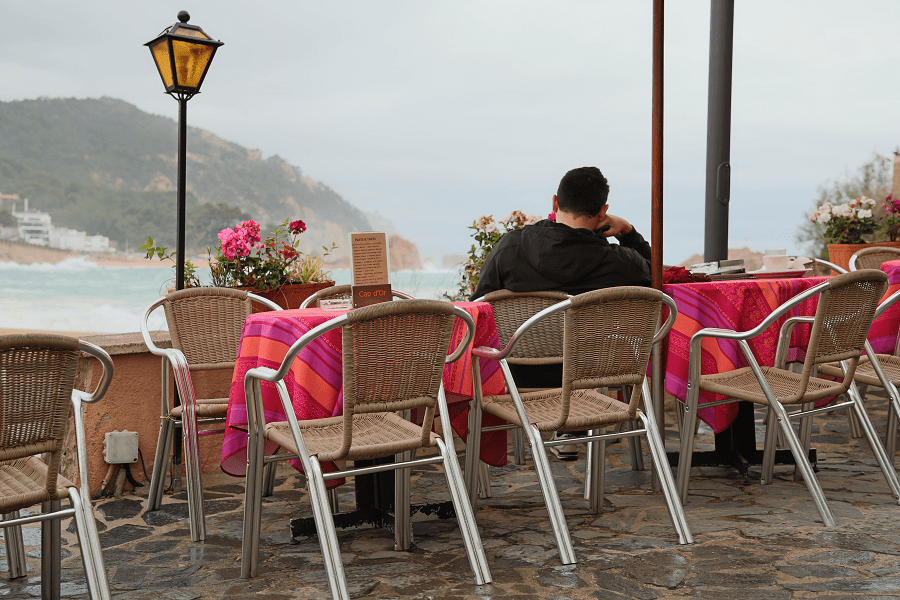 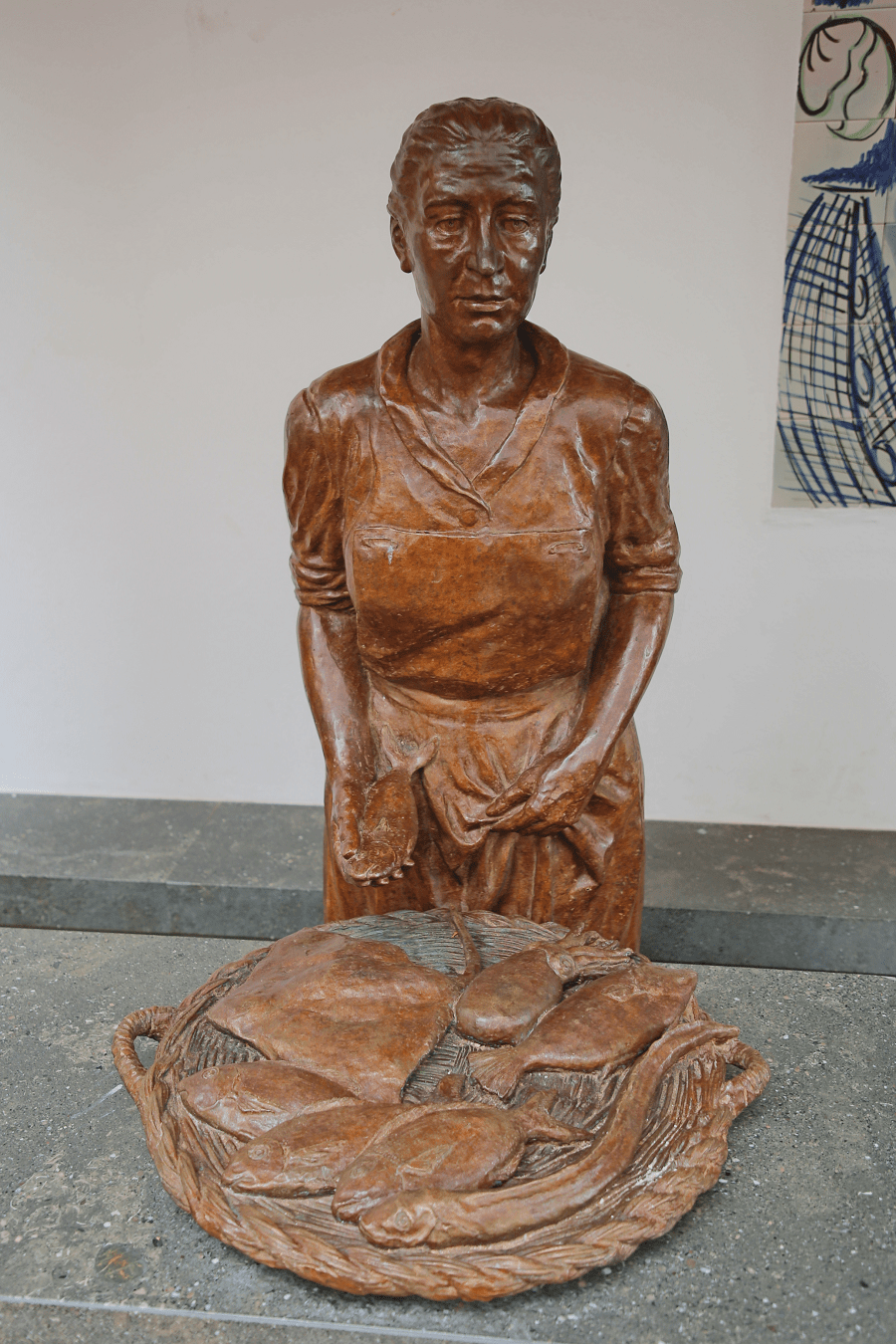 The cuisine of Tossa de Mar has been clearly influenced by the characteristics of its own region, but at the same time, the passage of time, the influence of different cultures and the life conditions of its people are what have kept it in constant evolution, shaping a proper local gastronomy, with similarities to that of our neighbour villages, but also with remarkable differences.

The restaurants offering TOSSA’S TRADITIONAL CUISINE in their menus are: Bahia, Ca la Carme, Can Carlus, Can Pini, Capri, Castell Vell, El Petit de Can Carlus, L’Ajustada, Marina, Mestre d’Aixa, Minerva, Sa Barca, Sa Muralla, Túrsia, Víctor & Victòria. These restaurants are enclosed in a brochure distributed by the Tourist Office and the Tourist Information Point. Moreover, each restaurant is clearly identified with a special label of Tossa’s Traditional Cuisine placed at the entrance of the establishment.

Main restaurants are concentrated along the beaches.

The main commercial area starts in the Ferrán Agulló and the Costa Brava avenues, and goes along the Pou de la Vila, Socors, Portal & La Guàrdia streets, most of them located in the pedestrian area of the town centre.The commercial area invites you to stroll around the streets and have a look around the shops, where you will surely find a good product and somebody ready to help. 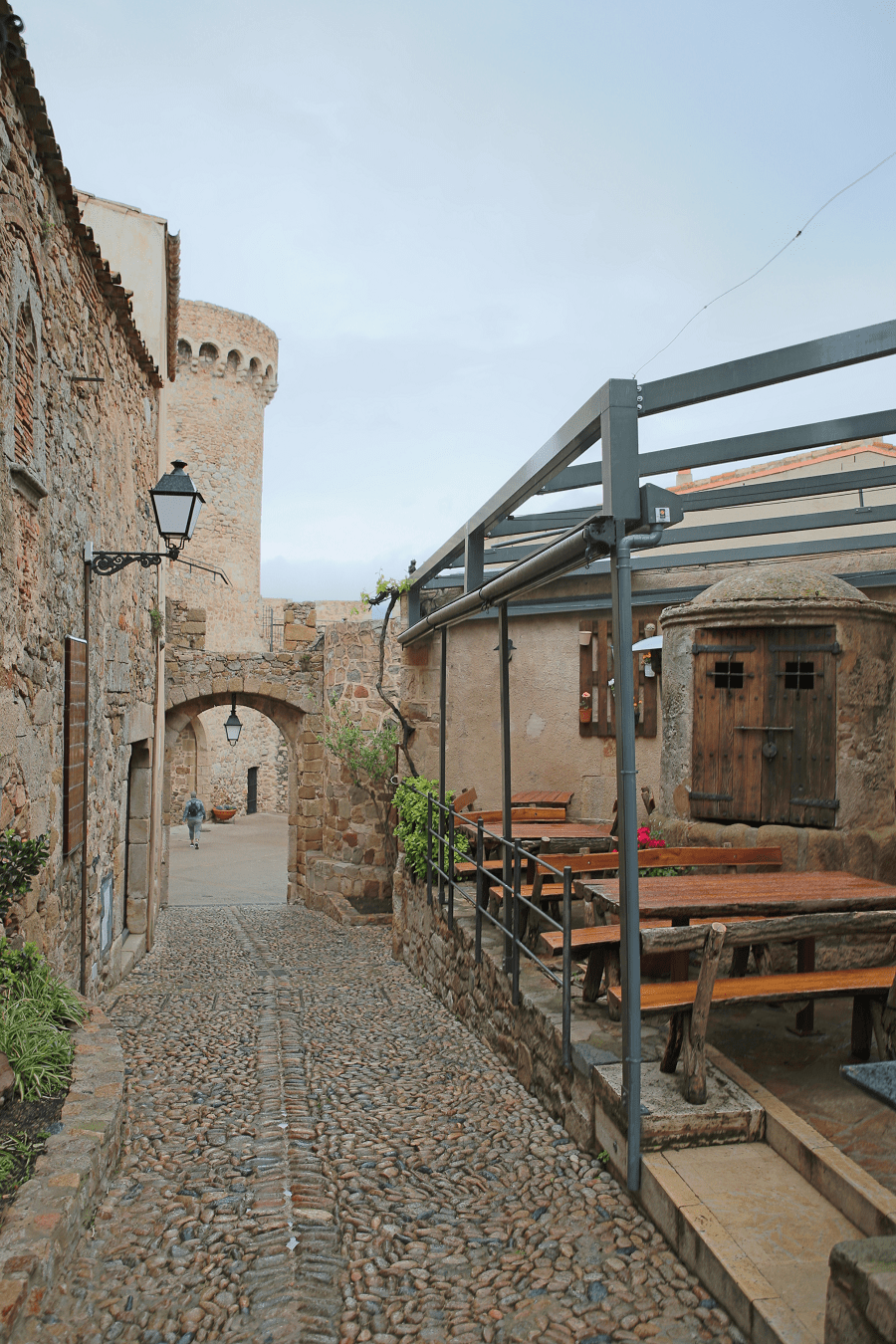 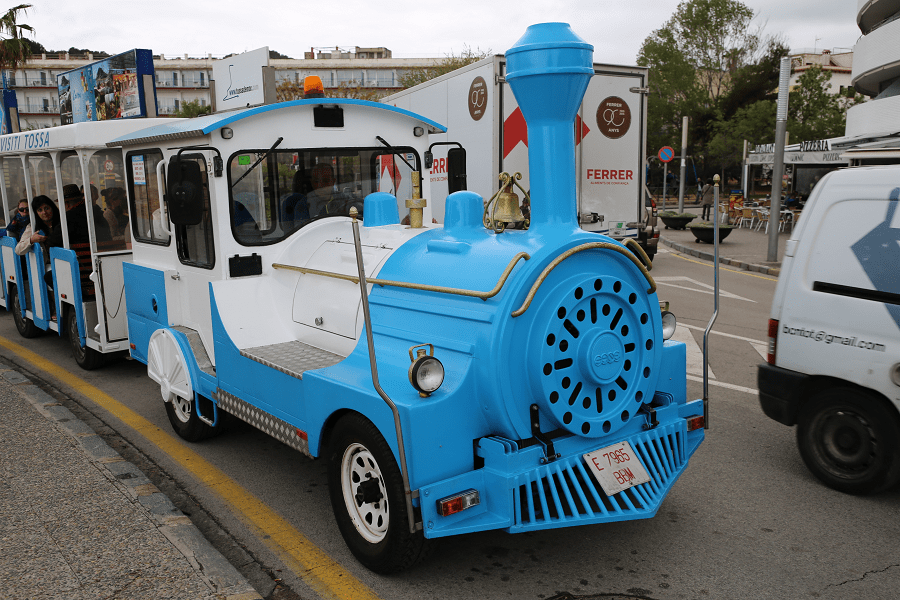 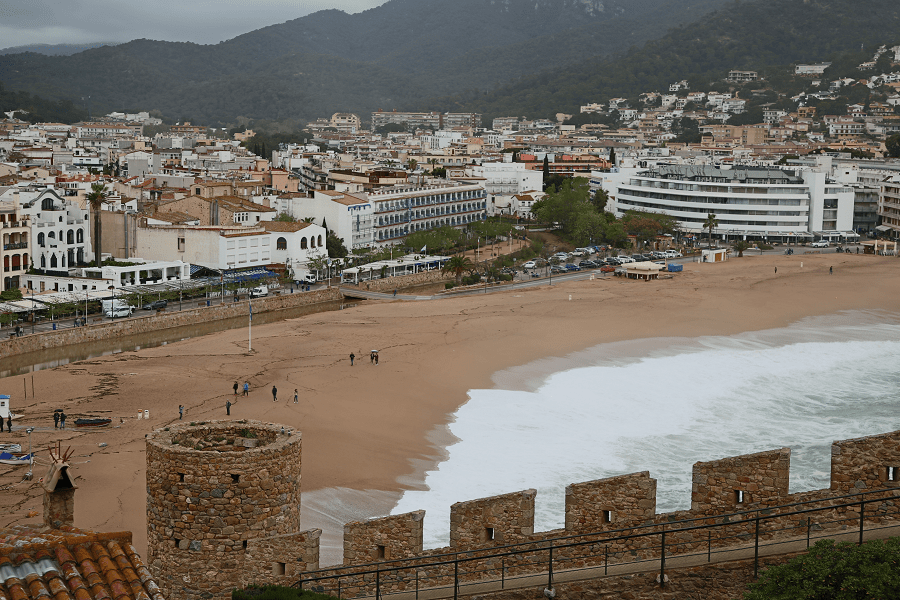 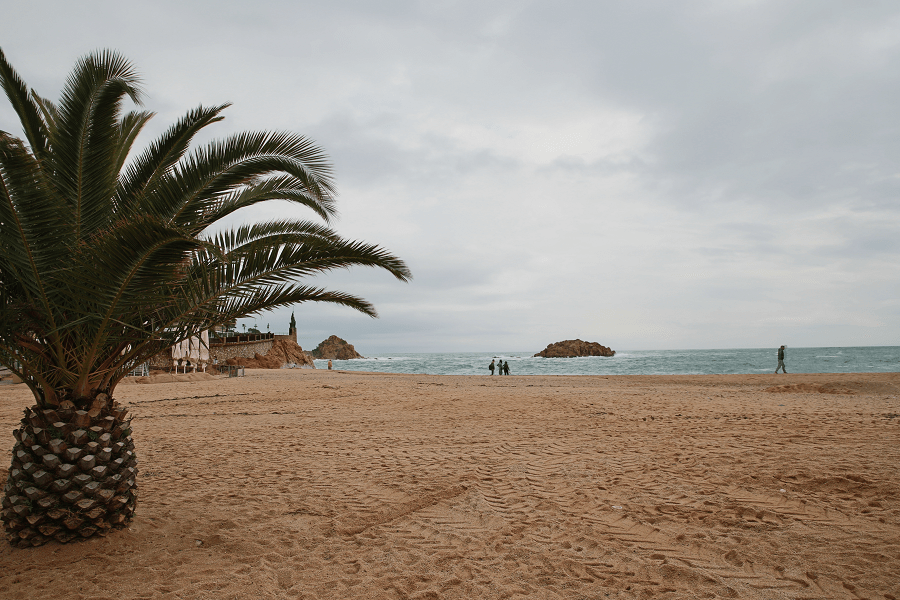 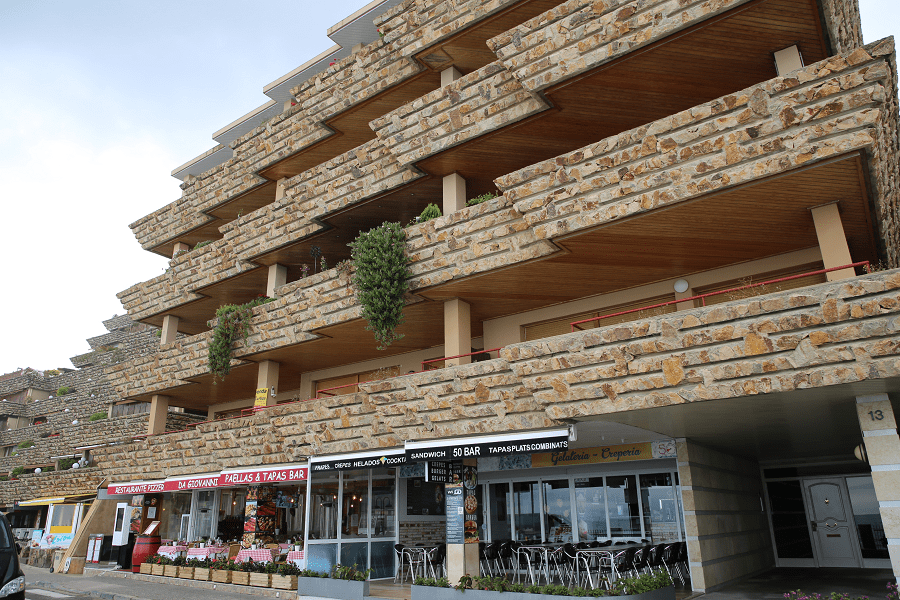