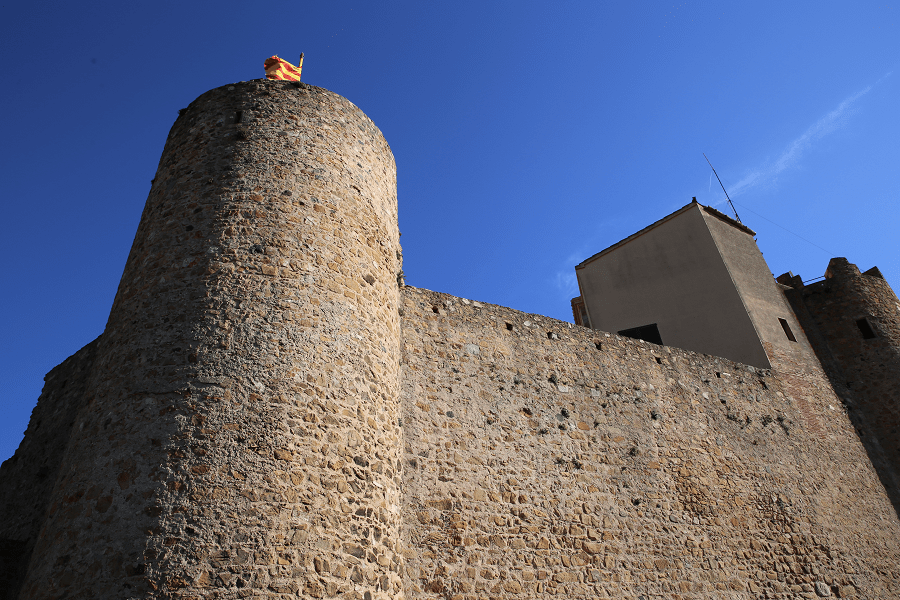 The municipality is the largest in the region and includes part of the Gavarres massif in the north and the Cadiretes massif in the south, dominated by cork, oak and pine forests. The Gotharra and Bagnalokes streams go to Onyar, and Ridaura to the sea.

Remains of Neanderthal settlements were noted around 100,000 years ago in the vicinity of Brugera and Can Morato de Panedes. From the human species as we know it today (Homo sapiens), the remains of the Upper Paleolithic, especially the Aurignacian period, between 39,000 and 22,000 years ago, stand out. Plots from this period have been discovered throughout the municipality, including Can Crispins, Brugera, Font de Panedes, Tranquinell, Puig Gros, Carretera de Tossa, Can Rissec and Can Vidal.

In Can Crispins, an area rich in water, a large number of flint ware such as scrapers, arrowheads and knives have been found that can be dated from the primitive Aurignacian culture to the ancient Bronze Age. The presence of flint items can be an indicator of trade relations with other places, such as Torroella de Montgri.

Later, later stone objects appeared, such as arrowheads, polished axes, boat-shaped handmills, which shows that the Can Crispins was also inhabited at least between the Middle Neolithic and the Ancient Bronze Age between 4700 and 3800.

The first document that mentions the municipality dates back to 855. In the modern era, the cork industry was of considerable weight, and the train from Girona to Sant Feliu had a stop there.

The Medieval Castle of Llagostera, the Renaissance House and the ruined Castle of Montagut are three municipality buildings protected as cultural sites of national importance. The castle and church of Sant Feliu de Llagostera define the urban silhouette of the municipality. Among the 51 monuments of the municipality protected as a cultural site of local interest is the Llagosterenc casino with a long history, which received the Creu de Sant Jordi award in 2014. It also has an interpretation center at Can Caciques.

The Can Caciques Interpretation Center, located in Carrer Processó, allows you to explore the medieval city of Llagostera through the ruins preserved as the Llagostera Wall, as well as historical and archaeological research, with a particular focus on the castle, double-walled building and street carcass.

The Vila Museum exhibits, among others, the works of Emily Vila and Gorgol. It was discovered by the same artist at his home, Casa Franquesa de Llagostera.

Casa de les Vídues is an old farmhouse that was abandoned until it was declared a Historical and Artistic Monument. Two windows on the ground floor with an arch under a canopy stand out with bright decorations, a dust cover and a stucco sill, the rest is completely done in the Renaissance style. The municipally owns a building and it was renovated in 1982.

Llagostera Castle (cat. Castell de Llagostera) is a spectacular thirteenth century fortress, which may have its origins in Iberian, Roman or Visigothic houses and defenses. From the original castle of the counts of Barcelona, ​​in the 14th and 15th centuries, it turned into a powerful fortified complex with two or three fenced walls and several towers, two of which have survived to this day. The building material is hard sandstone and granite.

Montagut Castle (El Castell de Montagut) is a fortress located on the top of Mount Montagut, from which the remains of the tower and fortifications at the top have survived.

The Church of Sant Feliu de Llagostera is a rectangular church with one nave and a polygonal apse. The vault consists of 15th century Gothic arches, fortified from the outside by buttresses. The load-bearing walls are in stone and the main façade is in stone from Girona An interesting portal in the Catalan Baroque style with columns and a pediment.

L’Estació de ferrocarril de Llagostera railway station is a free-standing rectangular building with a roof on two intersecting ramps using flat tiles. Large cornices and terracotta decorations on the ridges. A service building has been preserved. The same type of station construction can be found in all the villages on the railway line currently running Route Carrile II, the green road from Girona to Sant Feliu.

Casino Llagosterenc is an organization founded in 1856 as part of an associative movement among the population in the nineteenth century associated with the expansion of the cork industry. The current headquarters of the organization, opened in 1891 and renovated in 1929, is in line with the academic tenets of Noucentisme. The Generalitat of Catalonia awarded this company the Creu de Sant Jordi prize in 2014.

Casa Ribera is a square building that stands out for its balconies and decorative elements such as balcony beams with floral and human head elements. The interior is decorated with modernist paintings. The walls are plastered inside and are in good condition. This is one of the most interesting Art Nouveau houses in Llagostera. It is currently half abandoned.

The Capella de Sant Llorenç chapel, located at the top of the Turó de la Capella, currently has a rectangular floor plan, load-bearing walls of cement stone with well-hewn stone slabs at the corners. Preserved stone pillars supporting the wooden beams of the entrance porch. Highlights include a horizontal lintel and a canopy window with sculptural star-shaped decorations. The belfry with the bell of the chapel has been preserved.

Torre Albertí is a traditional rectangular farmhouse with concrete bearing walls and tiled roofs on both sides, with a stucco façade and partly decorated with geometric shapes. Highlights include a door and lattice window on the ground floor. Upstairs there are three Renaissance windows with the coat of arms of the Alberti family.

Can Vidal de Llobatera is a group of buildings around a rectangular house with stone walls and three coves. The main façade has openings with stone tiles and three Renaissance windows on the ground floor. This is one of several listed historic houses on the outskirts of the city.

There are two Michelin-rated restaurants in the city:

Llagostera has about a hundred stores, most of which are members of the Llagostera Store Owners Association, where you can find all kinds of goods.

The city is connected with the C-65 from Girona to Sant Feliu de Guixols, the C-35 to Parets del Valles, as well as local roads leading to Tossa de Mar.