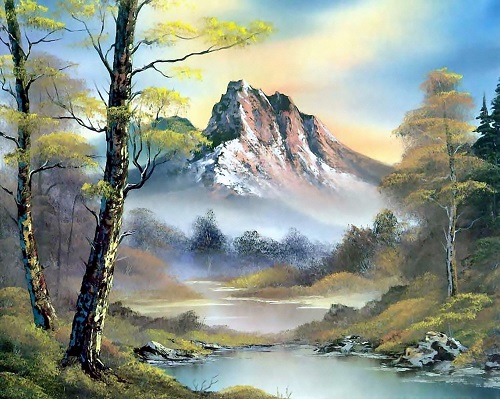 Once upon a time, high in the mountains in Andorra, a miracle happened: God’s mother appeared. She was called Meritxell, that in Latin means Light in the Middle of the Day; and the local inhabitants began to worship her as their divine patroness. On the place where the miracle had happened, they built a small chapel where Meritxell’s icon was kept. Inhabitants of the neighboring villages tried to take the icon away, but God’s mother always returned to her place.

One day Meritxell burst into tears…. it was painful for her to see how selfish and unfair people were. One magic tear fell on the white flower Grandalya. A marvelous sweet girl was born from the flower. With time the girl grew into the most beautiful and kindest princess in the world. Surrounded by the love and care of squirrels and the bear cub Marci, the princess grew up very quickly, filling the world with the light from her heart.

Far away, in a Scandinavian country lived Prince Oswald. He was a strong and slim man. The prince heard a lot of stories and legends about beautiful princesses. One day Oswald asked a magician to look into the magic ball in order to see the prettiest girl in the world. When the night came, the powerful magician said the ancient magic spell and the crystal ball lit up with multicolored reflections….and a beautiful girl playing with squirrels in a sunny field appeared…..and someone’s voice whispered: Andorra! The next morning, having heard the news, the prince called for his personal dragon and, having no doubts about his strength set off on a long journey to find the princess.

Bereginya, White Flower’s fairy heard about this and climbed on the top of the highest mountain in order not to let the unwanted guests in. Some time passed, a strong wind started blowing, dark clouds covered the sky and a terrible huge dragon appeared. Having gathered all her strength, Bereginya with the help of her magic wand cast a spell and turned the dragon into a stone. The agile Viking jumped off the dragon just in time and ran after the princess. Her squirrel friends tried to stop the warrior but failed. Then the bear cub Marci blocked his way. Their battle lasted for three days and three nights. The bear cub won because it fought for a fair cause, and the prince fell on the ground.

Having learnt about this, the princess rushed to the place of the battle and saw the wounded man. Pain and sympathy burst out of her with tears. She started curing the prince using all the potions and herbs she had to save him.

But the prince’s life was slowly disappearing. She didn’t leave him, even for a minute, as she looked at his face. This stranger suddenly became very dear to her.

The Scandinavian magician saw everything in his crystal ball. He gathered a group of dragons and rushed to rescue the prince. When the army was near Andorra, the magician looked again into the crystal ball and saw the princess’s tears dropping on Oswald’s face. He saw her love for him. With a movement of his hand, he ordered the dragons to go back and landed near the prince. Together with Bereginya he tried to cure him, but there was no hope. Suddenly, some white clouds appeared from somewhere and the rain told them whispering that only the water from a forest spring in Scandinavia could save Oswald.

White Flower decided to fly with the magician. The people of Andorra cried inconsolably not knowing how they would live without their princess. It was she who had taught them sympathy and kindness. Then they understood that love was impossible to retain and they let the princess go. The river Valira was filled with pure tears and its waters sparkled in the sun.

The flower and magician went back to Scandinavia on the magician’s dragon, found the spring and cured the prince. Having regained his consciousness, Oswald saw White Flower’s eyes and his heart lit up with kindness. True love changes man. With time Oswald became a wise ruler of his people.

Love is God’s gift. It makes mankind sensitive to someone’s pain. Oswald and the princess got married. Their family was made of love and respect. They had beautiful children. A lot of time has passed since then, but wizards remember the history of the Scandinavian Royal Family where the queen was White Flower, born by Meritxell’s tear, born from love!