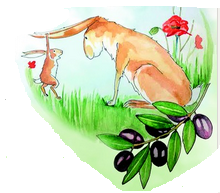 He was born in an olive grove where the sun, having risen in the azure sky, caressed the ground with its warm rays and shined onto the trees’ leaves.

From early childhood, Joselito was swift and curious. Once he asked his grandpa, an old and wise rabbit, why the olives matured on the trees in summer and then in autumn, nearer to winter, began falling on the ground. Having thought a bit, his grandpa replied:

Everything on this earth has its beginning and its end, and the brief moment between them is our life. An olive fallen on the ground becomes food for birds and fertilizer for new crops. Then the big rabbit paused to let the words enter his grandson’s heart and a moment later finished his thought, “We all have our way”.

These words made Joselito think for a long time.

Time went by quickly, and soon the little rabbit had become an adult.

One day on the way home, jumping carefully along the trunk of a fallen tree that served as a bridge across a fast river, he heard someone crying for help. Looking down into the water he saw a young female rabbit being carried away by the strong current, floundering desperately in the whirlpool. Joselito, without thinking, jumped into the cold water, swam up to the drowning rabbit, grabbed her and pulled her out of the water onto the bank.

Joselito had never been extremely brave, but this time he had rushed to help by following his kind heart. When the two rabbits regained their breath, they looked at each other and liked each other. It was love at first sight. So, fate had wanted him to meet his companion, his only love.

Some time later they married and began living in a cosy hole in the field not far from the noisy highway. Joselito’s grandpa had taught him to do everything he knew from childhood; he warned him many times not to go near this death-trap, the highway, telling him awful stories about fast cars that appeared suddenly, driving wildly and killing many people, leaving their lifeless bodies on the road. People, driving these cars, were pitiless and cruel. Listening to these stories, Joselito trembled and couldn’t understand why.

The young married couple built a cosy house in the olive field. Every morning Joselito left home to look for food, while his wife cleaned the house and cooked. Some time later they had two pretty babies: Silvia and Daniel. Silvia was a quiet daughter and always helped her mother in the house, but Dany was even more curious than his father and often ran away, making new friends far from home.

Though his father warned him many times not to approach the highway, Dany often broke his father’s rules, attracted by the noise of motors. Especially at nights he, having come up to the road, watched like in the circus all these running shining balls, illuminating everything around him. They rushed by making a terrible noise. Dany, delighted and motionless, waited impatiently for the light to approach again.

One evening the family gathered at the table for supper, but Dany wasn’t there. Hours passed, but Dany didn’t appear. When night came. Joselito couldn’t wait anymore and he ran out of the house to search for his son. The sky was covered by hundreds of stars that illuminated the ground with their magic light. Usually, Joselito stopped for a moment to admire them, feeling some mysterious joy in his heart. But this time he didn’t stop. Where was his son? What had happened to him? He walked and wept quietly and bitterly. He searched all the olive field, then all the other fields nearby. His son was nowhere to be seen. All the other rabbits were already sleeping in their holes.
Dany, sonny, answer!- he shouted into the darkness.

He heard the distant noise of the highway, saw the flash of lights, and smelt the pollution. Sometimes these lights could be seen from far away, sometimes they appeared quite suddenly, sweeping everything out of their way. Dany could have been there, on the other side of this death-trap. That’s why, in spite of his grandfather’s terrible stories and his fear of the highway, Joselito decided to cross the road. His son could have been there, on the opposite side.

Dany was still young and at night he could be afraid of crossing this noisy road. Joselito approached the highway and began studying the behavior of the light monsters. He noticed that they moved in groups. The first lights could be seen from far away: they illuminated the way for a long distance and rushed by like lightning, followed by some other flashes of light. Letting another set of cars pass, Joselito compressed himself like a spring and started running as fast as he could across the road. Having crossed half of it, he heard with one ear the growing roar, then he saw a light. Faster! He was running as fast as he could, the light was getting brighter. Faster! At last it was all over. He managed to cross the road. Joselito was sweating and breathing fast. He decided to have a short rest. When he regained his breath he heard a noise and ran towards it… It was Dany. He was crying, curled up in the high grass.

Dany raised his head and… and his eyes shone, wet with tears.

He told his dad that he had made friends with a rabbit in that field. And when the evening came, he decided to run back home to be in time for supper, but he lost his way and saw the highway with all these shining lights. He liked looking at them, but had been afraid to approach – so loudly they roared, so fast they ran. It was very frightening! By day he had crossed this dangerous line easily at his own risk, pushed by his curiosity to know what was there, to go further…

Then, the night came and he felt frightened and alone, scared by the flashes and noise he had been afraid to cross this strip of asphalt.

Listening to his son’s story, Joselito felt overwhelmed with joy to have found him. Now they had to return, crossing that dangerous place together to go back home to the rest of the family.

The rabbits came up to the edge of the road and Joselito began watching the torrents of lights: one of them had passed, then another and Joselito took a decision. He asked his son to be ready to cross the road in the darkness. He told him to run fast without looking behind, as fast as he could… One more torrent of cars had passed and the rabbits set off. Joselito was running after his son, pushing him forward, but his son was still small and couldn’t run so fast. They were only halfway when they saw the light on the road. Faster, son, faster! The headlights illuminated the running rabbits; they were quite near, they could hear the terrible roar. Joselito understood they had no time and, gathering the rest of his forces, he pushed Dany and saw him tumble into the darkness. He, himself, took the last jump, but…he felt a cruel blow, pain and nothing more.

Time passed and Joselito opened his eyes: he was at home, lying in his bed, all bandaged up. All his family were beside him. They smiled and embraced him. They were happy that their dad had regained his consciousness. It was impossible not to recover. Some time later our hero began walking, but unhurriedly with a stick. And in the rabbits’ world there appeared this wonderful story about brave Joselito and his son Dany.