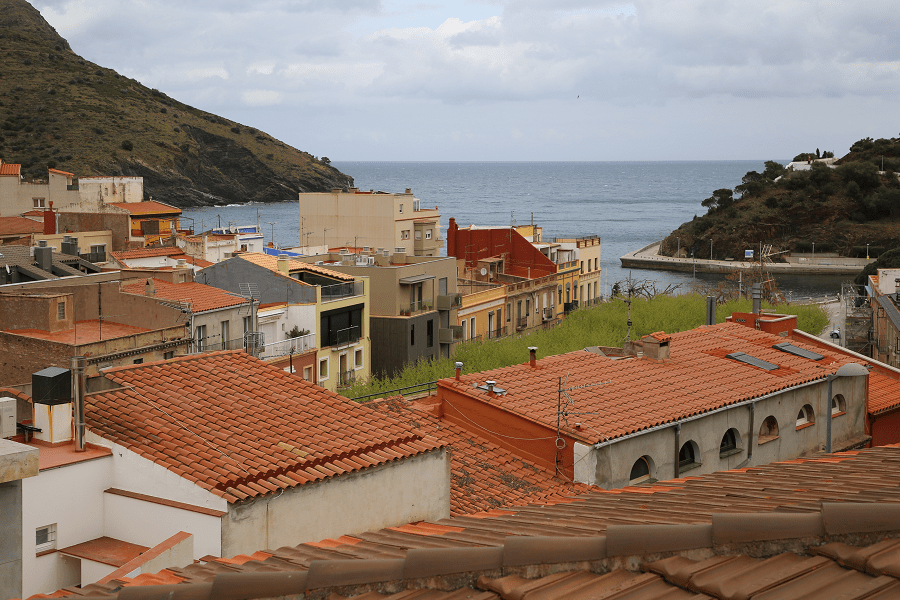 Portbou (cat. Portbou) is a municipality in Spain, the Alt Empordà region, Catalonia. The municipality of Portbou is located in the northeastern part of Alt Empordà, on the coast, on the border of the neighboring Roussillon region and the Spanish-French border established by the Treaty of Pyrenees (1659).

It’s the northernmost part of Costa Brava of the Mediterranean resorts of Spain.

It is quite difficult to pass and due to its location overlooking the Bay of Lleó (cat. Golf de Lleó), it is subject to strong northerly winds of tramontana. There were cases of overturning of railway carriages. Some streets in this small town have iron railings on the walls to ensure the safety of pedestrians. If the city of Portbou has a record, it is the one that relates to the speed of the blowing wind, as reflected in the data provided by the nearest meteorological information station.

In the central part of the municipality is Portbou Bay, home to most of the population. A marina has been recently built.

The city is special: neither agricultural, nor fishing, nor tourist, but born of progress and created around the railway station.

Since 1659, due to its proximity to Roussillon, it became a border zone between France and Spain. In 1857, a Spanish-French agreement was signed regulating the passage of the railway through the municipality. In 1878, a railway line of international importance was opened, linking France and Catalonia. The new station was built in 1929 with a large iron and glass canopy by the architect Joan Torras i Guardiola.

The Parish Church of Santa Maria de Portbou (cat. Santa Maria de Portbou) is located on a hill and was built in 1878 by the Tarragona railway company in Barcelona and France on the esplanade of the station in the highest part of the city for religious services. It is protected as a local cultural property.

In Plaça Major, there is a stone fountain dating from 1955 and decorated with the city’s coat of arms.

Next to the church, between Carrer Colera and Carrer Mercat, there is a square decorated with the Font dels Ninots, built in 1922.

Portbou Station is located on the Barcelona-Girona-Portbou line and has the status of an international station. It is the terminus of SNCF trains on standard track widths, which is served in conjunction with the French station Cervera de la Marenda, and which is the terminus of RENFE trains. The two stations are connected by tracks of two types: standard and Iberian.

Although the city is officially considered the northernmost resort of the Costa Brava, it cannot please tourists with its beaches. The city has only one small city beach with a length of no more than 300 m.

There is one restaurant in the city marked in the Michelin rating: Voramar, Passeig de la Sardana 6, Portbou, 40 – 90 EUR • Modern cuisine.