Antoni Martí and Sílvia Calvó took part in the global summit of the "One Planet Summit" on combating climate change in Paris on 12th December • All PYRENEES · France, Spain, Andorra 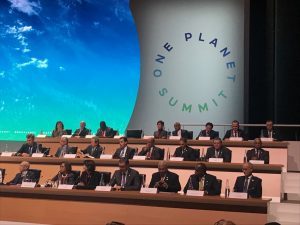 The head of Andorran government, Antoni Martí, and the Environment Minister of the principality, Sílvia Calvó, took part in the global summit of the “One Planet Summit” on combating climate change in Paris on 12th December. The Andorran delegation supported the initiative of co-Prince Andorra and French President Emmanuel Macron “to give new impetus to the commitments on climate change taken at COP21,” reports Andorran Government.

The goal of the summit is to mobilize actions to combat climate change and help accelerate existing commitments.

The parts also talked about possibility of attracting the media, both public and private, to contribute to this process in terms of spreading the information.

The head of the government of Andorra took part in the dialogue with the heads of more than 50 states, which confirmed their commitments taken at COP21.