Andorran PM Antoni Martí discussed with the head of SEGIB Rebeca Grynspan the possibility of hosting the Ibero-American summit in 2020 in Andorra • All PYRENEES · France, Spain, Andorra 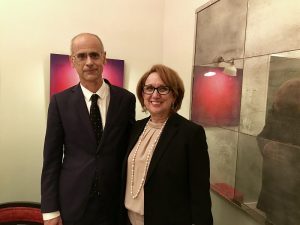 On 16th May Andorran PM Antoni Martí met in Madrid with the head of the Secretaria General Iberoamericana (SEGIB) Rebeca Grynspan to discuss the possibility of hosting the Ibero-American summit in 2020 in Andorra.

According to Antoni Marti, Andorra’s nomination for the summit in 2020 is an initiative of the state, based on the support of all the political forces of the principality. Anyway Antoni Marti resignes in 2020 because it’s his second and last term being PM.

“The organization of the 2020 summit will allow Andorra to play a major role in the life of the Latin American community, as well as to demonstrate the features of the economic, political and social life of the principality,” reports the Government.