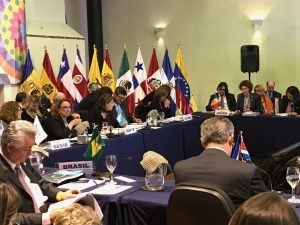 Andorra will be the venue for the Ibero-American Summit in 2020. This decision has been unanimously adopted today by the FMs of the Ibero-American countries, who discussed this issue at the 24th session of the Council of Foreign Ministers of the Organization for Security and Cooperation in Europe (OSCE).

The session takes place on December 7-8, 2017 in the Austrian capital, Vienna.

The corresponding decision was introduced in the form of a political declaration.

The final decision will be taken within the framework of the next, 26th Ibero-American Summit at the highest level, to be held in La Antigua, Guatemala, at the end of 2018.

The summit is held every two years with the participation of representatives of 22 countries.