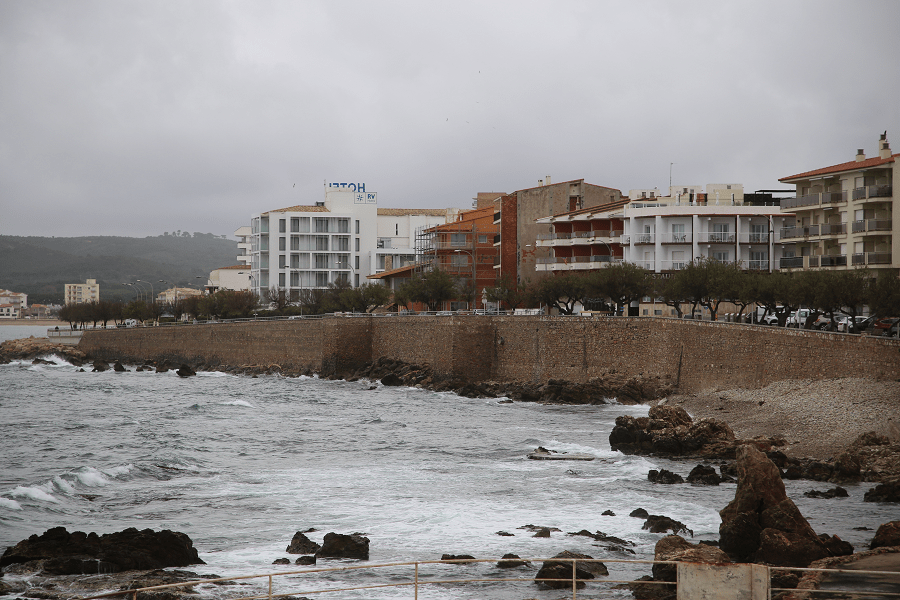 The city’s economy originally based on fishing. The Escala coast was used as a port and the life of all the inhabitants revolved around it. Currently, the economy is based on tourism, as can be seen from the large number of hotels and summer residences.

L’Alfolí is an old salt mine or salt warehouse in the municipality of L’Escala, declared a cultural heritage of Catalonia of national interest. Located in the old town of L’Escala, very close to the beach and street number 6 that bears his name. In 2006, the site was acquired by the city council, which turned it into a cultural space and center for the interpretation of the history of L’Escala.

Castell de Cinc Claus is a castle in the municipality of L’Escala, declared a cultural heritage of Catalonia of national importance. Located in the northwest of the city and about two kilometers from Empuries, in the Cinc Claus area. It can be reached by the road to Cinc Claus in Empuries, near the GI-623 motorway.

These are the remains of the ancient Cinc Claus castle, formed by the portal and tower of the old wall. The portal gave access to the inside of the fence from the south and is now attached to the east and west facades of the Conkas and Bassedes farmhouses.

Empuries (lat.Emporiae) is an ancient Greek colony founded by the Phoceans, and later by the Romans, located at the southern tip of the Gulf of Roses, northeast of the present city of L’Escala, south of Sant Martí d’Empurias. This is one of the headquarters of the Museum of Archeology of Catalonia. Currently, the ruins belong to the Generalitat of Catalonia and are part of the archaeological park. On its territory is the old monastery of Santa Maria de Gràcia d’Empúries (cat. Santa Maria de Gràcia d’Empúries), rebuilt in the 1910s, which houses the Monographic Museum of Empúries (MAC-Empúries). The Greek archaeological site Empuries is inscribed on the UNESCO World Heritage List and is awaiting recognition as a World Heritage Site.

Sant Martí d’Empúries (cat. Sant Martí d’Empúries) is a large settlement in the municipality of L’Escala. Located next to the ruins of Empuries. It is a medieval city and was the capital of Empúries County in the ninth, tenth and eleventh centuries until it moved to Castelló d’Empúries in 1078, a place less vulnerable to attacks. The historic ensemble has been declared a cultural heritage of national interest.

Sant Pere (cat. Sant Pere de l’Escala) is one of two parish churches in the municipality of L’Escala. Located in the center of the old town of L’Escala. Protected as a local cultural property.

The Museum of Anchovies and Salt (Cat. Museu de l’Anxova i la Sal) is a museum in L’Escala, opened in 2006 in Escorxador Nou de l’Escala to showcase the city’s cultural heritage. The permanent exhibition shows the history of fishing since the 16th century, especially that of salted anchovies.

The museum also organizes the Salt Festival, an event that takes place annually on the third Saturday in September.

Casa de Caterina Albert is a house in the municipality of L’Escala, protected as a cultural site of national interest. Located in the old town of L’Escala, in the northeastern part of the city, with a main façade overlooking the sea and boulevard Luis Albert. It is a rectangular building, consisting of a garden and a small pavilion, which houses the Victor Català Museum-Archive (cat. Arxiu “Víctor Català”).

Lake Poma (cat. Estany de la Poma) is a natural lake included in the Catalog of Territories of Natural and Landscape Interest of the Province of Girona, located in L’Escala. Its length from north to south is 230 meters, and from east to west – 55 meters, the total area is about 10,920 m². Little known to this day due to the fact that it is located on the territory of a private camping. In 2017, the first proposals were made to restore the lake and its natural environment on an area of ​​8.2 hectares, including archaeological finds from the second century BC and the third century AD.

From North to South:

The most characteristic product of L’Escala is anchovies with an indication of origin. This fish is so popular that many restaurants and shops in the city are dedicated exclusively to it.

There are three Michelin-rated restaurants in the city:

L’Escala offers an excellent base of local products.

Shopping in the city is more than three hundred shops. You will find a wide selection of local products, fashion, accessories, household items, gifts and art. Local businesses have adapted to the needs of local residents and visitors alike by updating and modernizing their offerings to meet diverse demand.

There is also a small fruit and vegetable market in Plaza Victor Catala (center of the old town of L’Escala) where you can buy local products on Thursdays, Saturdays and Sundays. This market also works on Wednesday – in Plaça Univers of Riells.

In summer, there is an evening craft market on Paseo de Riel.

The GI-632 connects the C-31 from Figueres to Palamos.