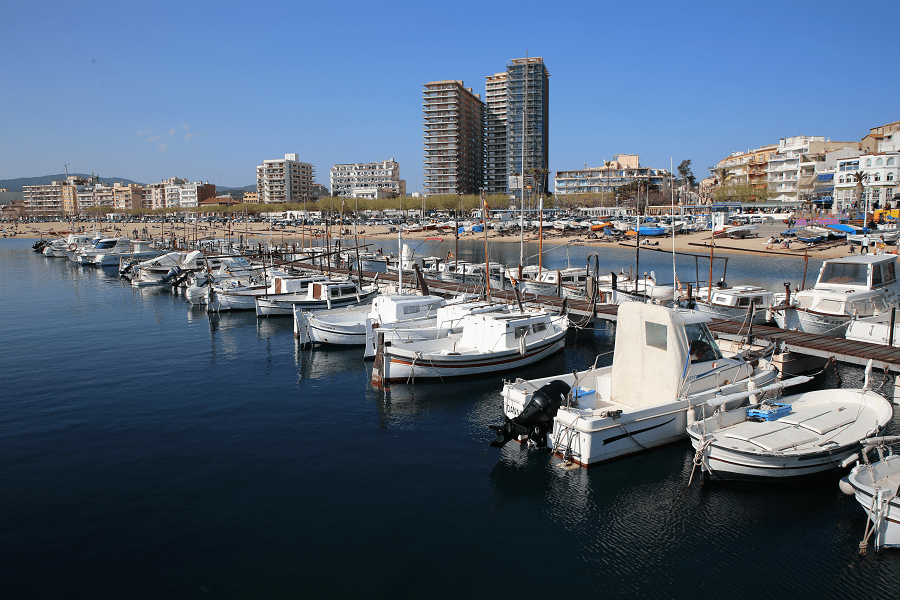 Palamos (cat. Palamós) is a municipality in Catalonia located in the Baix Empordà region, Spain. Its port experienced a great heyday, especially in the early twentieth century, with the development of the cork industry in the region. The port complex now brings together three important sectors: fishing, trade and tourism.

Palamós is the second largest fishing port in Catalonia. Fishing activities in Palamos were incorporated by the Pobla de la Vila Charter (1279).

At the beginning of the twentieth century, there is evidence of the existence of a society called La Previsió Pescadora. Between 1920 and 1939, fishing associations were known throughout Catalonia as fishing grounds, a popular name that is still colloquially used today. At the end of the Civil War, the name Fishermen’s Guild appeared.

The main product of the Palamos fishery is the red shrimp (Aristeus antennanatus), which are brought to the market daily by a specialized fleet of trawlers. Great efforts are currently being made to maintain a reputation for their unrivaled quality through careful selection and conservation.

Palamos is a resort town – part of the Costa Brava.

The Iberian city of Castell (cat. Poblat ibèric de Castell) is a settlement of Indigues that dates from the sixth century BC to Roman times. It reached its TOP  in the 4th and 3rd centuries BC. Discovered by Luis Barcelo y Bou, curator of the historical archives of Palamos, and excavated in 1945-55 by M. Oliva, the materials found there are mostly in the Archaeological Museum of Girona.

In 1996, it was declared an object of national interest.

The Fishing Museum (Cat. Museu de la Pesca), opened in 2002, is dedicated to the study and dissemination of the fishery, as well as the maritime and fishing heritage of the Costa Brava. It is located in the area of ​​the fishing port of Palamos, in an old port warehouse called Tinglado. The permanent exhibition is divided into zones where the past, present and future of fishing on the Costa Brava are explained in terms of sustainability and development. The Fisheries Museum has  nhree related distribution projects: Les Barques del Peix, l’Espai del Peix, Documare: Documentation Center for Fisheries and the Sea and the Department of Marine Research at the University of Girona.

The Chapel of the Virgin del Carme (cat. Església del Carme) is also included in the List of Architectural Heritage of Catalonia. Currently (since 2015) it houses a center dedicated to the dissemination of local heritage (cat. Center d’interpretació del patrimoni local), which is managed by the Fisheries Museum.

Teatre la Gorga with 322 seats, divided into 242 seats on the ground floor and 80 in the amphitheater. Art and music are the stable cultural entertainment of the city, both professionally and amateur.

The castle of Sant Esteve de Mar (cat. Castell de Sant Esteve de Mar) is located on a cliff between La Fosca beach and s’Alger bay. Only a few tower foundations and a few walls remained. A trail leads to it, which starts from the beach of La Fosca. In 2015, the Palamos City Council consolidated the castle ruins under the Open Romanesque program promoted by the Generalitat de Catalunya and the La Caixa Foundation.

Cap de Planes (cat. Cap de Planes) is a geographical feature of the coast, between the municipalities of Mont Ras and Palamos, located opposite the Formigues islands at an altitude of 800 meters. There is a reef on Cap de Planes. To the south of the headland is a cove known as Cap de Planes.

Holidays and festivals of Palamos

The main holiday of Palamos is celebrated annually from 23 to 26 June.

Since 1950, in mid-July, a maritime procession in honor of the patron saint of the peoples of the sea has been held with great success.

Carnival of Palamos is one of the most important winter festivals and one of the first carnivals of the Costa Brava. It is celebrated annually on the first Saturday after Maundy Thursday.

As in any fishing port, the main shopping is fish and seafood. Every weekday afternoon you can see and buy local seafood at the fish market. Most of the fish were caught the same day. Market sellers buy fish and seafood at auction and then offer them to the public at the market. The fish market is usually open from 5:00 pm to 7:00 pm (5:00 pm to 8:00 pm) from Monday to Friday.

The city has five Michelin-listed restaurants:

As with most coastal towns on the Costa Brava, Palamós has both rocky coastlines and sandy beaches. Swimming or relaxing on the beach is the perfect way to spend the day.

The largest beach, Platja Gran, is a long sandy beach well integrated into the city. It is located within walking distance of the city center, the tourist information office and the fishing museum. There is parking next to Paseo del Mar Avenue, as well as toilets, showers, walking paths and a variety of services (beach umbrella rentals, kayak rentals, boat tours).

A huge number of restaurants and hotels are located along or near this beach.

Playa de la Fosca is another beautiful sandy beach in Palamos. It is located on the other side of the port, about 20 minutes walk or 5 minutes drive from the city center. This beach is often a favorite vacation spot for families with young children due to the relatively shallow structure of the coast. The beach has showers, ramps and lifeguard services. Near the beach there are also cafes and hotels.

Playa Castell is a beautiful sandy beach on the outskirts of Palamos. In summer, there is a small cafe and kayak rental service on the beach. You can also visit the ruins of the Iberian settlement of Castell directly above the beach or Barraka den Dali, located in a forested area.

It is the least developed of the three main beaches, but it still feels more natural.

There are other beaches in and around Palamós including Playa del Morr del Vedel and Playa de Monestri. There are also several small coves with small sandy or rocky beaches such as Cala Margarida, Cala Estreta and Cala S’Alger. To reach many of the bays, it is best to use a bike or car.

The coastal trail connects all the beaches and coves, allowing you to combine a short hike with a beach holiday.

There are several ways to get to Palamos, but the only direct route is by car, bus or taxi.

By plane. There is no airport in Palamos, but the nearest airports are Barcelona Airport (1.5 hours drive) and Girona Airport (40 minutes drive).

By train. There is no train station in Palamos. But if you are traveling by train from anywhere in Spain or Europe, the nearest train stations are in Caldes de Malavella, Girona and Barcelona. From the train stations you can take a bus or taxi to Palamos. You can check the train timetable on the RENFE website.

By bus. If you are traveling by bus or need a bus service, there are regular routes to Palamos from Girona, Barcelona, ​​Barcelona Airport, Lloret de Mar, Caldes de Malavella, Palafrugell and many cities on the Costa Brava. Buses in the area run through the Moventis Sarfa, here you can find the bus timetables and prices.