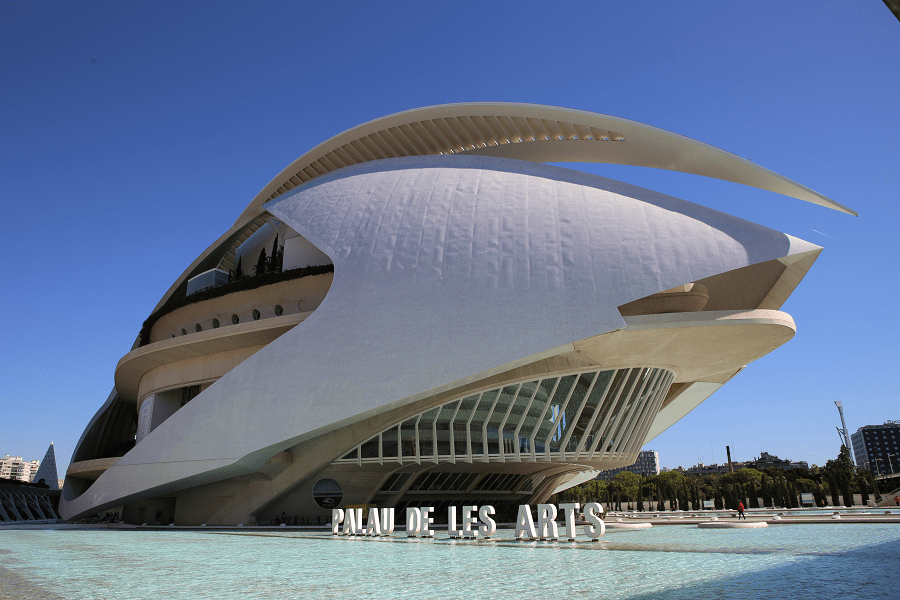 The City of Arts and Sciences (Sp. Ciudad de las Artes y las Ciencias) is a cultural and architectural complex in the city of Valencia, Spain.

The complex was designed by Santiago Calatrava and Félix Candela, together with the engineers who created the structural design of the L’Oceanografic roofs Alberto Domingo and Carlos Lázaro. It was inaugurated on June 9, 1998 with the opening of El Hemisférico. The last major component of the City is the Agora, located between the bridge of l’Assut de l’Or and l’Oceanogràfic. 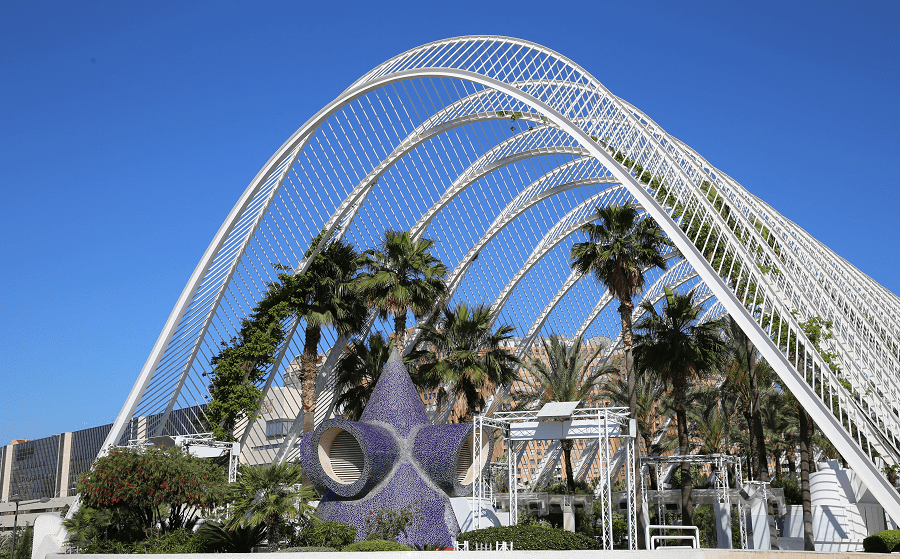 The City of Arts and Sciences is located at the end of the old Turia riverbed (Jardín del Turia), that became a garden in the 1980s, after the river was diverted by the great flood of Valencia in 1957.

Inside of El Hemisférico, an eye-shaped building designed by Santiago Calatrava, there is a large room with a concave screen measuring 900 m² and a diameter of 24.4 m. 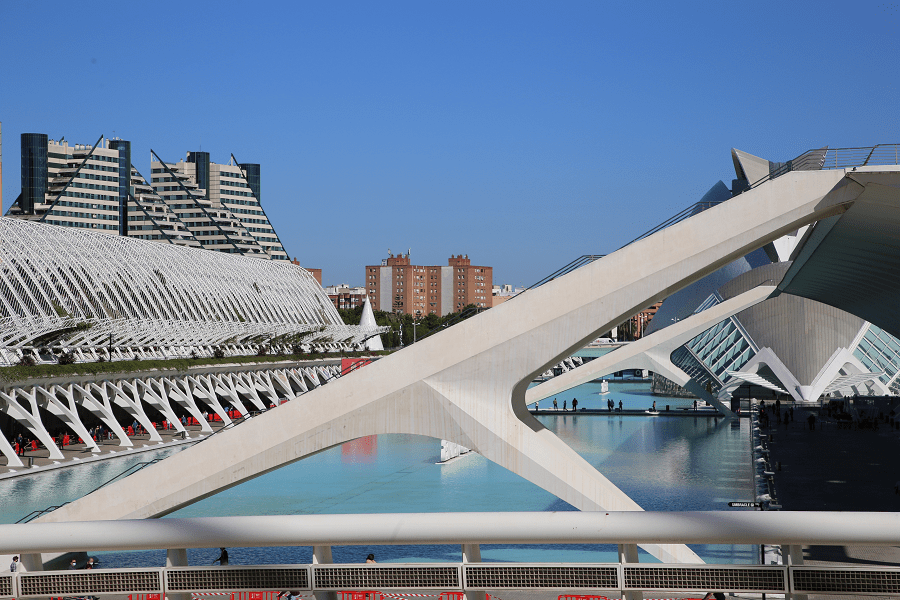 It is the largest room in Spain that houses three projection systems on a 900 square meter concave screen: 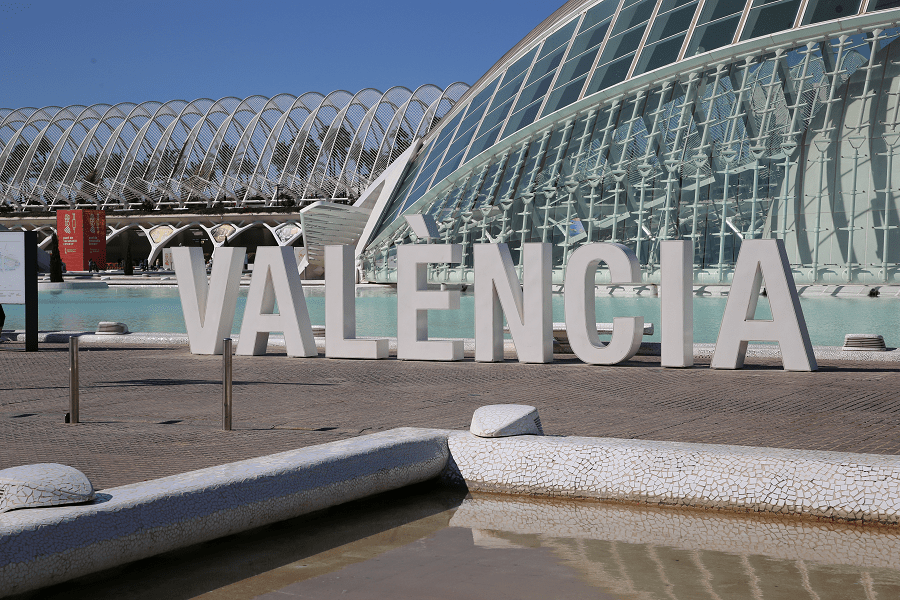 The Museum of Sciences is a Spanish museum dedicated to science, technology and the environment located in the complex of the City of Arts and Sciences of the city of Valencia. 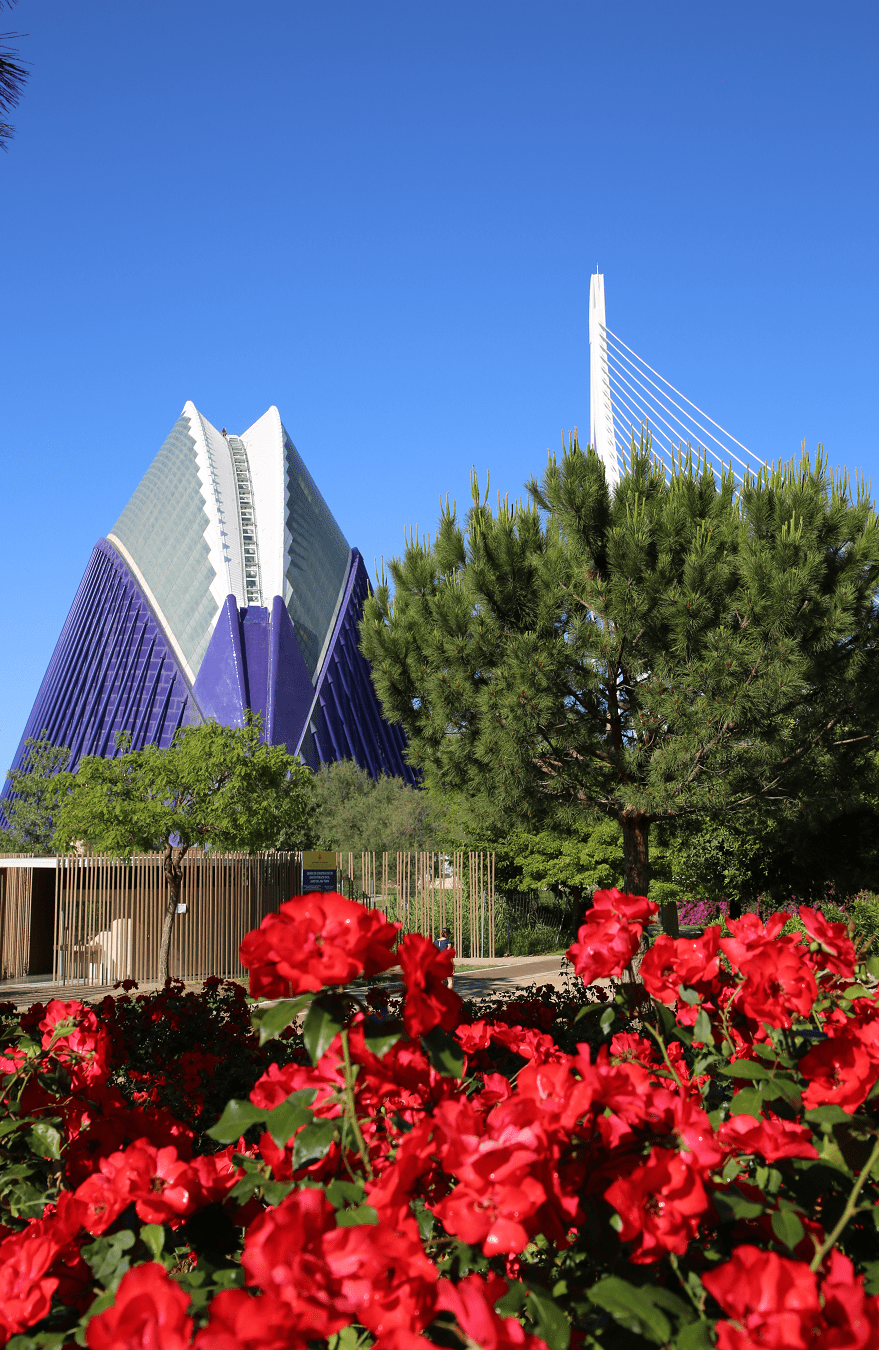 Inaugurated by the President of the Generalitat, Eduardo Zaplana, on November 13, 2000, José Luis Olivas being president of the Board of Directors of the City of Arts and Sciences under the direction of Pilar García-Argüelles, the Museum of the Sciences Príncipe Felipe is a spectacular building of more than 40,000 m 2 dedicated to bringing science and technology closer to the public, as well as having recreation and restaurant areas.

With large free access spaces, the Príncipe Felipe Science Museum facilitates access to all kinds of activities and initiatives related to the evolution of life and scientific and technological dissemination, standing out for being a state-of-the-art museum, with interactive exhibits , under the motto of “Forbidden not to touch, not think, not feel.”

The almost 30,000 square meters of exhibitions framed by the amazing architecture designed by Calatrava are at the service of scientific culture. The Museum’s programming is not permanent, but it periodically renews its contents, dedicated to various aspects of science and technology.

Along with interactive exhibitions, the Museum also promotes the dissemination of the largest possible number of publications related to science and that create opinion among citizens. 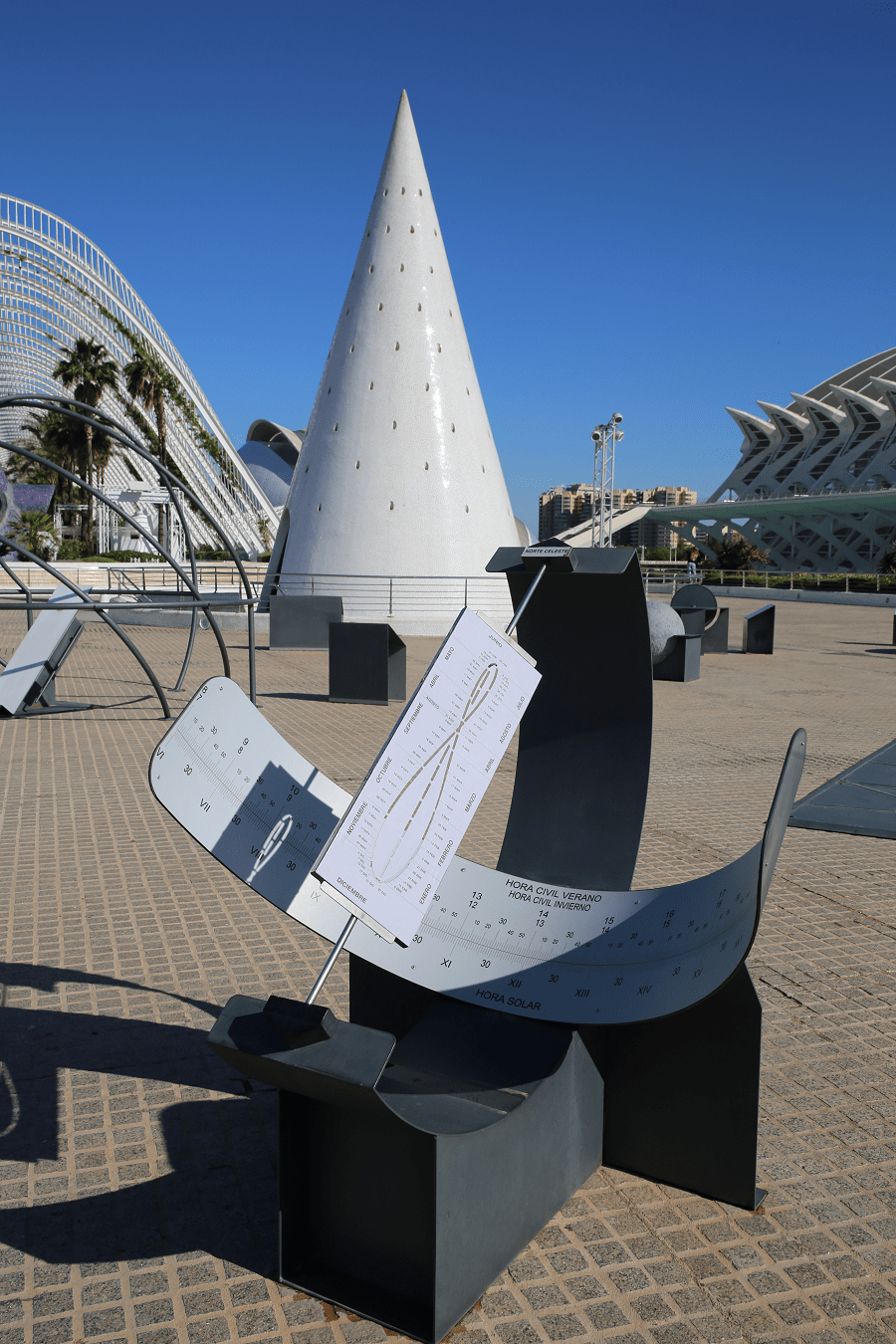 L’Umbracle is a small urban public garden that is part of the whole of the City of Arts and Sciences in the city of Valencia. It stands out for being a series of parallel arcades in the shape of a shade house covering an elongated and narrow garden of palm trees and other Mediterranean plants. The structure is made with white trencadís, a typical style of Santiago Calatrava’s buildings.

The Umbracle is a viewpoint of more than 17,500 square meters with an exhibition area from which you can see the globality of buildings, ponds and garden areas of the Ciutat de les Arts i les Ciències.

It presents vegetation typical of the Mediterranean region, the Valencian Community and tropical countries, which varies throughout the seasons of the year, and where there is also an interesting exhibition of contemporary sculptures in the Paseo del Arte, with free access. Also at the Umbracle visitors can stroll while learning astronomy in the interesting ‘Astronomy Garden’. 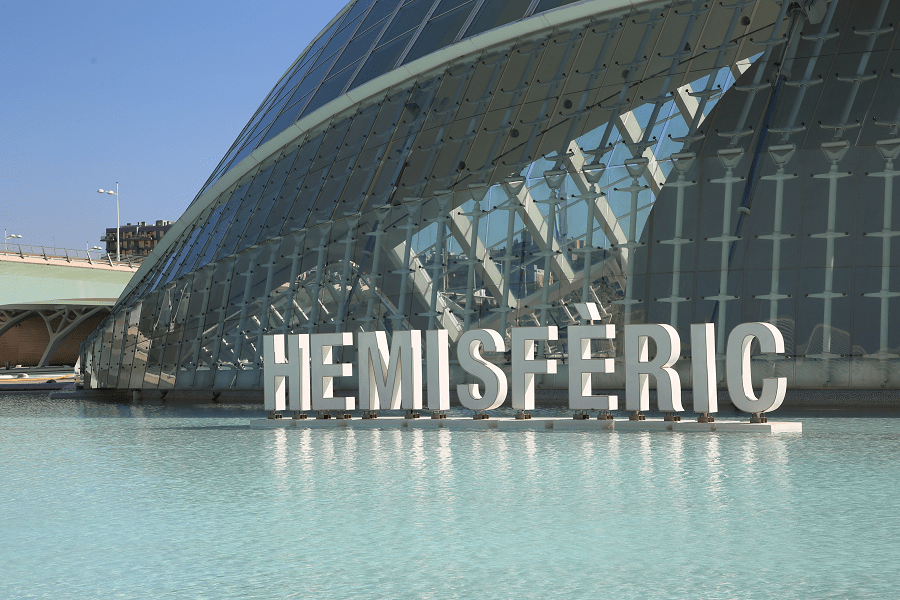 Oceanogràfic is a complex work by the architects Félix Candela and José María Tomás Llavador, and the engineers Alberto Domingo and Carlos Lázaro, where the different marine habitats (seas and oceans) are represented in an area of about 110,000 m². It is located in the eastern part of the city of Valencia, integrated into the City of Arts and Sciences. It was inaugurated on February 14, 2003 and, since 2016, it has been managed by the Avanqua company. 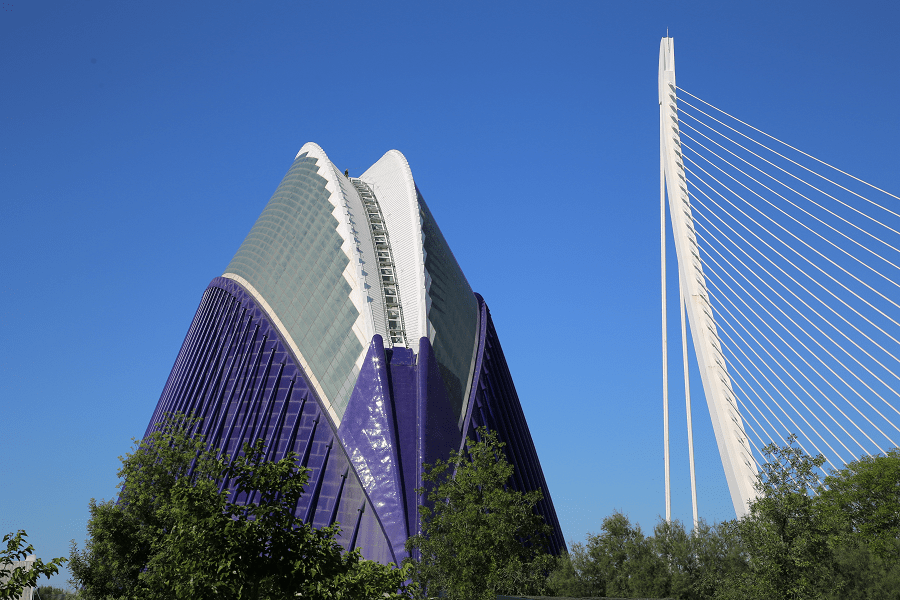 The Reina Sofía Palace of the Arts is the opera house of Valencia, and headquarters of the Orchestra of the Valencian Community.

The Palau de les Arts Reina Sofía, after the inauguration of the Hemisfèric in 1998, the Museu de les Ciències together with the Umbracle in 2000 and the opening to the public of the Oceanogràfic in 2003, completes the artistic ensemble and places culture alongside science, technology and nature. 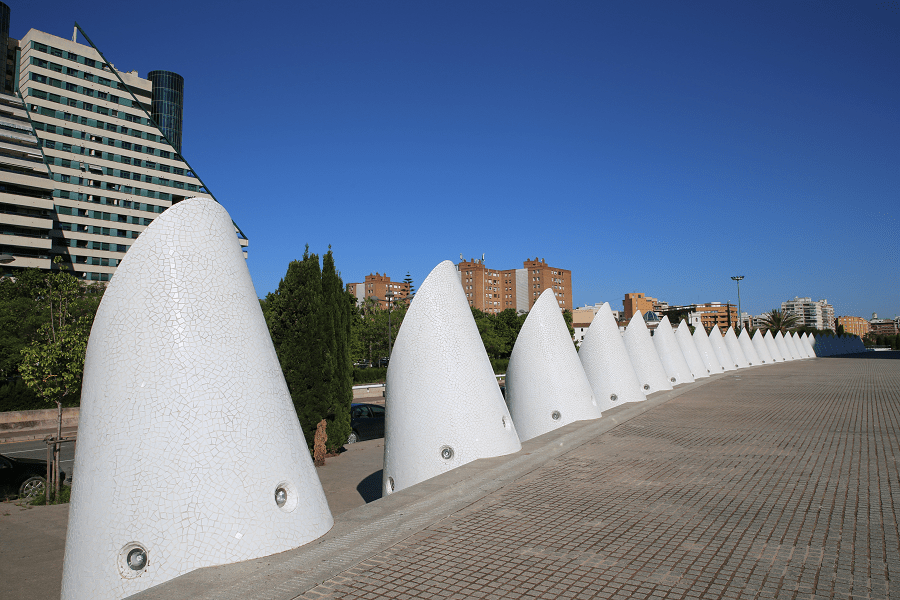 Inaugurated in 2005, it has the most modern technologies, adopting the image corresponding to an avant-garde and current space, becoming a cultural dynamizer that places the Valencian Community, since its centenary musical tradition, in a privileged place among regions around the world.

The majestic building, designed by the Valencian architect and engineer Santiago Calatrava, means that the city of Valencia and the Valencian Community have the best infrastructure to introduce them to international circuits, especially with regard to opera and great musical shows.

The Assut de l’Or bridge in Valencia, also known by its nickname of the “jamonero”, the candle or the harp bridge, is a cable-stayed bridge that crosses the Turia Garden. Designed by Santiago Calatrava. The bridge was completely finished in December 2008. It is located in the complex of the City of Arts and Sciences, between the Principe Felipe Science Museum and the Agora (also owned by Santiago Calatrava), and links the southern round with the Menorca street. 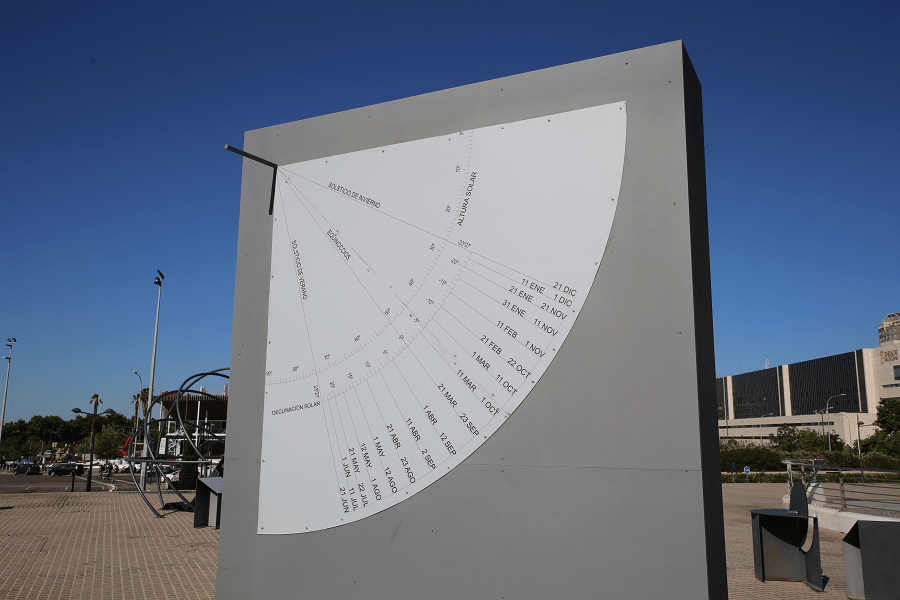 The Ágora is a large covered square designed by Santiago Calatrava located in the complex of the City of Arts and Sciences in Valencia, between the bridge of l’Assut de l’Or and l’Oceanogràfic.

Space with great versatility that allows hosting events of various kinds. A multifunctional stage designed for holding congresses, conventions, concerts or performances, with the possibility of becoming an area for exhibitions. The Àgora is a metallic structure similar to a pointed ellipse, about 88 meters long by 66 meters wide. Its covered area is approximately 4,811m². This large interior space is conceived as a covered public square, with an open plan, at the level of the ponds and adjacent walkways. The building is surrounded by two lakes that serve as a complement to the interior space. 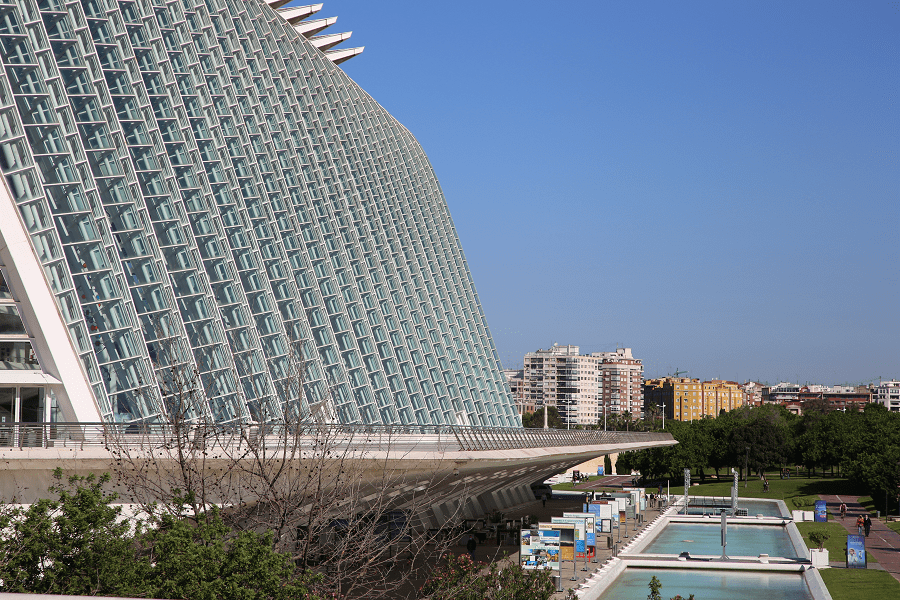 In 2010, Agora became the arena of the Spanish Burn Freestyle Cup, in which the best riders took part. 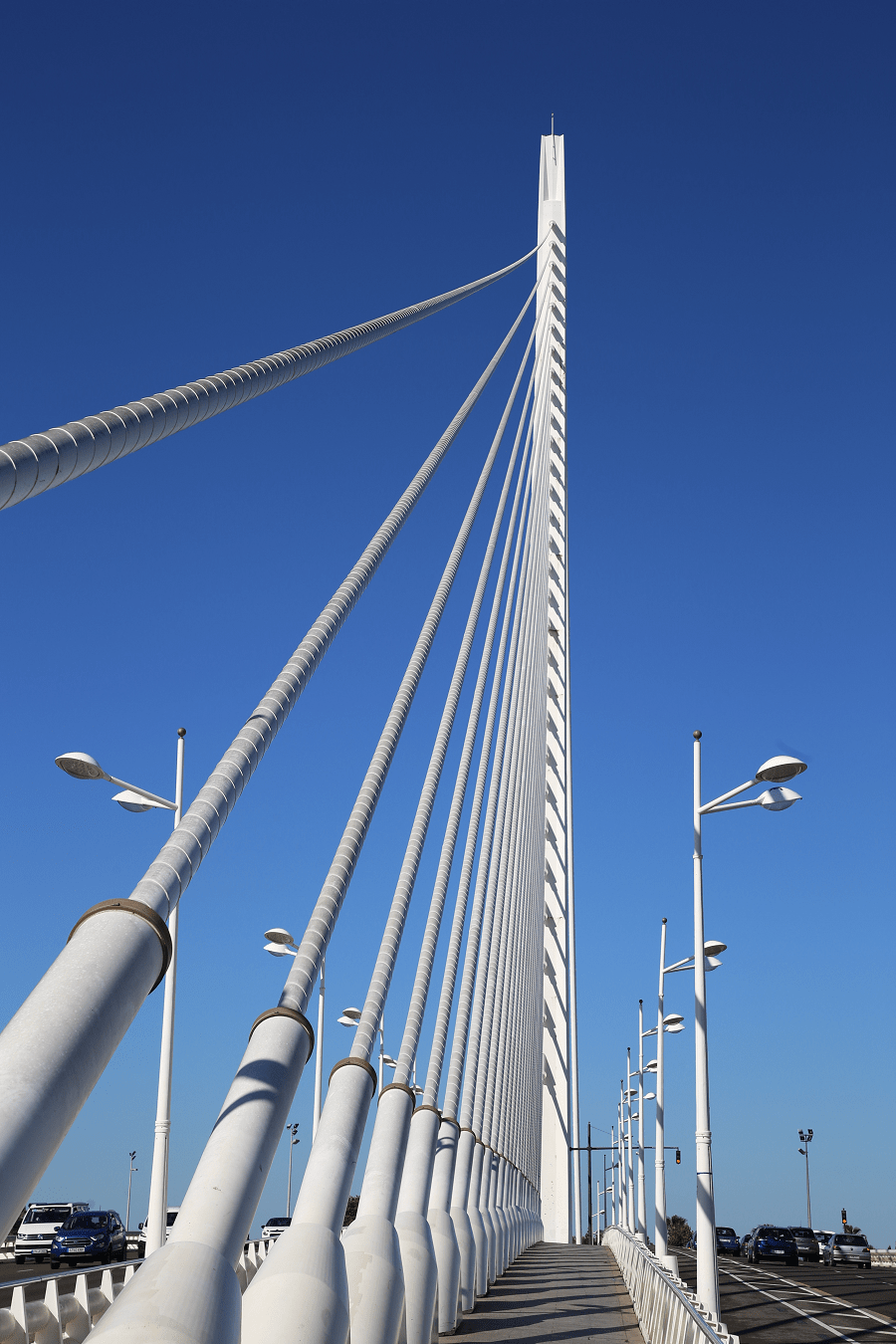 An art exhibition was also organized here with the participation of Juan Ripollés and Willy Ramos, who created three paintings in four hands. The works were transferred to Casa de la Caridad in Valencia for subsequent auction. 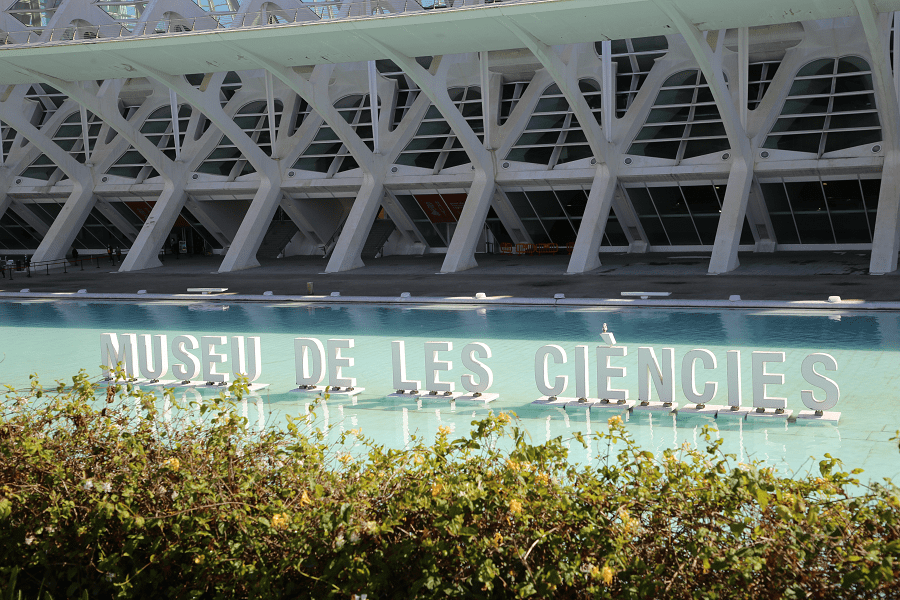 It should be noted that Àgora has hosted the Valencia Fashion Week (VFW).