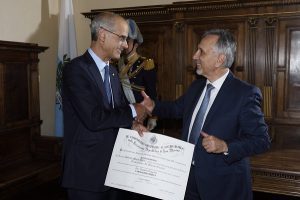 The Head of Government of Andorra Antoni Marti during his official visit to the Republic of San Marino was awarded the Grand Cross of the country “Order Eqüestre de Santa Àgueda”. Buring his welcome speech at the awards ceremony Antoni Martí thanked a high-ranking representatives of the authorities of the republic and stressed that his visit was a symbol of good diplomatic relations.

Antoni Martí expressed his respect for this small country, which has managed to preserve its identity and independence, and at the same time adapting to the European environment. “In this sense, both our countries are similar,” he said.

“Grand Cross of the Order Eqüestre de Santa Àgueda – a sign of our great respect of Andorra,” said in a joint statement of San Marino Regents Gean Nicola and Massimo Andrea.