The municipality of Sant Llorenç de Morunys is the smallest of the 14 municipalities that make up the Solsonès region, Catalonia (Spain) It has only 4.34 km² which are not even in a single continuous line, as it is divided into two parts.

The smallest of the two parts does not reach 1 km² and is constituted by an enclosure shaped like a musketeer hat when seen from a side and with the front tip of the hat facing towards the town of Sant Llorenç. This enclave includes Mola de Lord, the southern section of the Tossal de Vall-llonga slope and to the north it forms a narrow strip, about 500 m long and 150 wide.To the east it borders with the road that goes to the sanctuary of Lord and to the west with the Torroella gully, and its northernmost part begins after the second turn to the left, which is the path that leads to the sanctuary, having passed the tunnel. This narrow strip borders to the north and east with Guixers and the rest of the enclave borders with Navès. 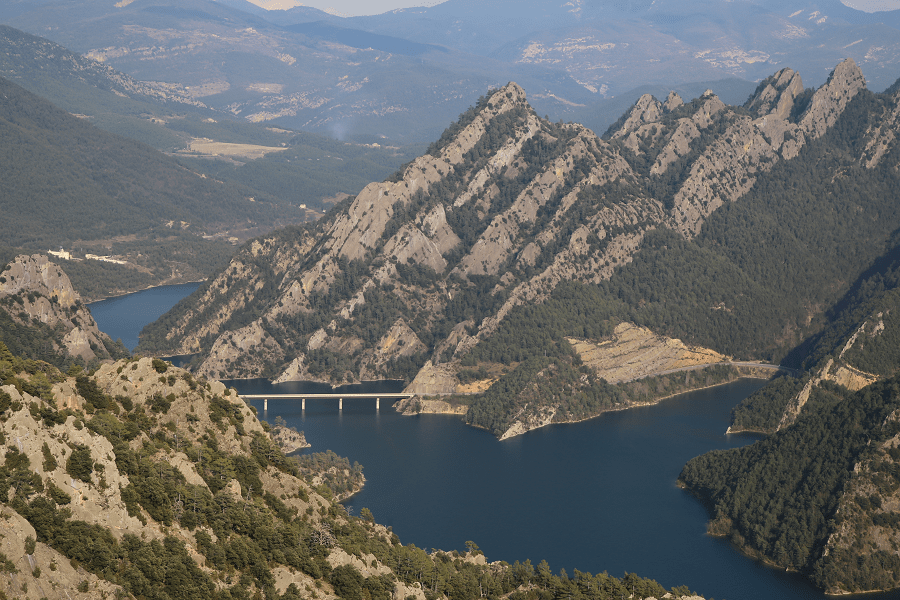 Large part of the municipality is located in the south-eastern part of the Sovereign Valley of Lord, on a plane sloping to the east, on the lower part of the south east slope of the Querol range and on the eastern slope of Coll de Jou.

The easternmost point of this part of the municipal district is flooded by the waters of the Llosa del Cavall reservoir.

It is the lowest altitude part of the municipality (the water level of the reservoir, when it is full, reaches to 805 m) and the highest altitude points are reached west of the chapel of Santa Creu of the Ollers at 1,010 m and on the southern slope of the Rocks of Lord, where it reaches 1,100 m.

As for the southern enclave, it is located on the south side of the Roques de Lord, its highest altitudes are reached at the top of the hill of Vall-Llonga which rises to 1,252 m and at the top of the Mola de Lord that rises up to 1,189 m while the lowest part corresponds to 900 m of altitude at the edge of the gully of Torroella.

In the official gazetteer of the toponyms of Catalonia, only the following names appear: the Serrat de la Creueta and Mola de Lord.

It has a mediterranean climate typical of a territory that is at altitudes between 800 m and 1,100 m. In the town of Sant Llorenç de Morunys, the precipitation averages 81.66 mm annual, May is the wettest month (92 mm on average) and February the driest (32 mm on average). The average annual temperature is 10.5 °C, January is the coldest month (-1.9 °C lowest average) and July is the warmest month (27.0 °C maximum average). The average solar radiation is 14,190 w / m² per day.

The history of Sant Llorenç is related to that of the monastery that gave it its name, even though in the old documentation, it is mentioned as Novezào Lanoves:

● In 910, in this place, there was a house and a church, where under a canonical rule of Visigothic tradition lived some clergymen, presided by Abbot Bo

● In 971 Count Borrell II endowed this community with an extensive ownership of the Navès lands, among it a place called Cort and the church of Sant Pere, that surely is Sant Pere de Ventolra

● In 992 Count Ermengol I, son of Borrell II, makes new concessions that include much of the Valley of Lord Sobirana

● In 997 Posada parish is added to the previous donations. These county donations and the incipient monastery are a manifestation of the desire to repopulate the sector

● In 1019 in the context of introducing the Benedictine rule, the monastery adopted it at the request of the bishop of La Seu d’Urgell, Sant Ermengol, joining the Tavèrnoles monastery as a priory. As a result of this establishment, the construction of the Romanesque temple began, that today is the parochial temple

● In 1283 Ramon Folc, the first count of Cardona, granted the legal status of vila franca (cat. freetown) to the families that had been installed around the monastery. This, meant the birth of the town of Sant Llorenç (for a while it was named Vilafranca, although, before, the group of houses formed around the monastery had been known as La Pobla

● In 1343, the Brotherhood of the Colls was founded

● In 1419, Lluís Borassà painted the altarpiece of the Holy Spirit

● In 1480, Francesc Solives painted the altarpiece of the Mercy

● In 1713, Joan F. Morató sculpted the altarpiece of the main altar following the plan of Segimon Pujol, the grandfather of the famous Sculptor dels Colls

● Between 1773 – 1784 The sculptor Josep Pujol i Juhí, commissioned by the Brotherhood of the Colls, built the chapel of the Virgen de los Colls

● In 1823, Antoine Rotten, general of the liberal army, gave the order to set fire to the town, and on January 20 San Lorenzo had already been reduced to ruins after being looted

Tourism, sights, historic buildings and what to see?

List of architectural elements of Sant Llorenç de Morunys that are included in the Inventory of the Architectural Heritage of Catalonia:

● Museum of the Patronage of the Valley of Lord (former headquarters of the Brotherhood of the Colls) (Style: vernacular, Period: End of the 18th century)

Shopping in Sant Llorenç de Morunys is not a priority on the tourist program. Only on weekends city bazaars and fairs, which traditionally take place on weekends or on some public holidays in the main square, can be of tourist interest. At the fairs, in particular, you can come across exclusive products grown in the region. Among them are some well-known wine and cheese brands in this region.

There are a little restaurants in the municipality. Be prepared to have a good sandwich!