Foix is just half an hour away from Andorra, so our city could be really interesting for the tourists coming from Andorra, says the Mayor of Foix, Norber Meler • All PYRENEES · France, Spain, Andorra 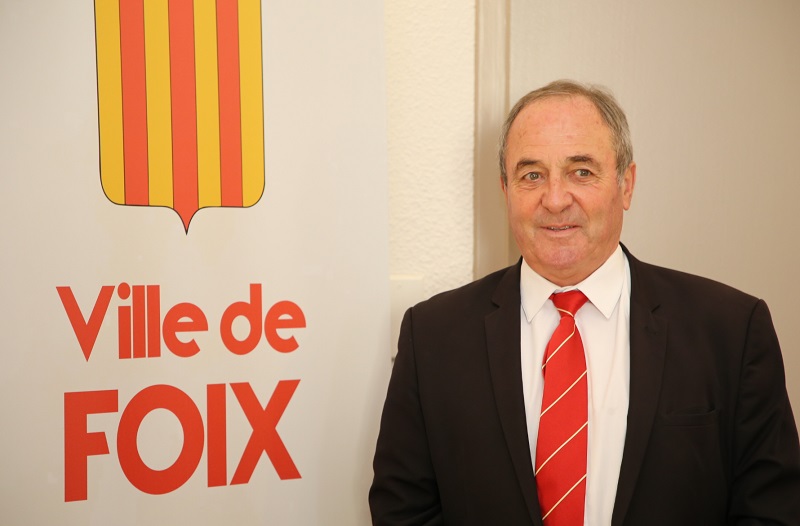 Norber Meler told all-andorra.com about plans to develop the city, investment projects and the main tasks the administration of Foix currently face.

How long have you been the mayor of Foix? What is the population of the city and its political structure?

Regarding the politics, the Municipal Council of Foix consists of ​ 29 municipal councilors, most of whom (24 councilors) are socialists who are associated with the Europe-écologie-les Verts party. This is the left. There are 3 elected Republicans (right) and 2 representatives of France insoumise (extreme left). We are elected for a term of 6 years, that is, my mandate is valid until March 2020.

I am a political socialist.

How often do you meet with the French president?

Last year, I attended the President’s annual meeting with all the mayors of France – that’s 3,500 people. Emmanuel Macron spoke to us during the meeting and explained what money he planned to give us, and what money to take … This annual meeting of mayors normally lasts for several days.

This year such a meeting will take place in November.

What tourist attractions besides the famous castle would you recommend to tourists?

It depends on how much time they have. If you can stay in Foix for a few days, you can visit the abbey of Saint-Volusien, the forge of Pyrène, the underground river Labouiche. Personally, I really like the little mill le Moulin de Buret (Pays de Foix) – it is located high in the mountains. This mill used to feed the whole valley. It is especially popular in the summer when visitors are allowed to turn the windmill themselves.

Next to Foix are ​​also the remains of the old castle Le château de Labarre. It defended our city. Vertical holes in the outer walls can still be seen, which in the past, allowed the castle’s soldiers to shoot at the invaders.

What are the main economic indicators of your city?

Foix is ​​a city with a turnover of approximately 12 million euros. The volume of investments this year was 5 million euros. Our housing tax is lower than in other French cities with a similar number of inhabitants – that is, from 10,000 to 20,000 people. The debt ratio of Foix is also much lower than in similar cities.

If we talk about major investment projects, I can say that our main task is the development and modernization of our city. Over the next six months, we will be engaged in the reconstruction of the houses in disrepair. In the center of our city, there are many old houses. We have had a project to repair them for 10 years. This will be the main argument in favor of people wanting to stay in Foix. And, accordingly, it will contribute to its economic development. The center of our city must be beautiful. Otherwise, it will be a dead city.

We need new schools, new parking lots, and we are planning to reconstruct some streets and squares. We also need to organize cultural events more often and take better care of the social protection of our residents. These are our investment plans for the coming years.

Are there any projects that could interest foreign investors?

What high-tech businesses are in Foix?

In the suburbs, there is a high-tech factory, Continental Automotive SAS, which provides 500 jobs. It produces lighting equipment, as well as spare parts for cars such as sensors, fuel pumps and electrical equipment.

You mentioned the University of Foix. Please tell us more about it.

The university opened in 1990. At that time, it had the status of a “teacher training college”. Now, this University Center named after Robert-Naudi is a full-fledged institution of higher education. We have 420 students, including those who come to us from neighboring departments. The university works in 3 ways. On the one hand, it still specializes in the training of teachers, especially school teachers. The second direction is tourism. The third direction is the landscaping an urbanization.

Soon, the university will be 30 years! And it continues to develop year upon year.

What is the relationship like between Foix and neighboring Andorra?

In the early 2000s, a cooperation agreement was signed between Foix and Andorra la Vella. However, in my opinion, it must be renewed. We should cooperate more closely in the economic sphere, as well as in the field of medicine, youth policy and student exchange.

Today, Andorran patients, when they need medical care, go to Barcelona. Foix is ​​much closer, there is also a modern hospital here.

The same has occurred in the field of tourism. Andorra la Vella and Foix have a common historical heritage. Foix is just half an hour away from Andorra, so our city could be really interesting for the tourists coming from Andorra.

In June of this year, I met with Andorra’s French ambassador. We decided to resume our cooperation.

I don’t know. Perhaps this just needs to be done. If there is interest, there will be an opportunity. Only this is not really our task. The development of tourism in Foix is ​​handled by the travel agency Ariège.

According to local estate agencies, 1 square meter of housing in the center of Foix is from 1000 to 1500 euros. What are the dynamics of the real estate market?

Today, prices are stable. But, obviously, prices will rise as the city develops. Over the past 2 years, the number of stores that opened exceeded the number that closed. The number of jobs available is also growing.

A question from our readers from the USA, Great Britain and Russia. Are there any tourist relations between these countries and Foix?

No, we have no direct relationship. But we know that tourists from England, Russia, and Israel come by bus to us. Not far from Foix, there are two famous tourist sites:  Tarascon-sur-Ariège prehistoric park and the Labouiche underground river. On this river, you can make a trip to the cave by boat. It is fantastic! This tourist place attracts a huge number of tourists from various countries.  To see these spots we invite all tourist from Andorra. For this, we need to make tourism more structured.

And how many tourists currently visit Foix?

The local council bought a large building at the foot of the castle, where the city court used to be located. We have built a new courthouse in the south of the city. The former courthouse is very old and needs renovation. It will be completely renovated and it will be a large historical museum.

This will help us increase the number of visitors to the castle. We will build an elevator that can be used by people with disabilities or families with small children. The project will cost 8 million euros. The project will be completed in June 2019.

The castle is a tourist site, it should attract more people. Thanks to the new museum, tourists can stay here for 3 or 4 hours instead of one hour. So we will need cafes and restaurants, hotels …

Are there many 4 and 5-star hotels in Foix?

No! This is what we really need. We need both luxury hotels and restaurants. We have a local agency that is engaged in researching industries and the study of the hotel business – A. A. A. And we are looking for investors!

We have three interesting projects in the city. Next to the cafe Villote is an old private house. Previously, it was a hotel. Now the building needs repair. We also have a building that was one of the most beautiful hotels in the region. It is called La Barbacane, it is also private property.

And we have a former Bank of France building. This building of the XX century has a park area surrounding it. It could well be a beautiful hotel and restaurant. Previously, the bank employed 50 employees, now there are no more than five of them! And for the French state, it is expensive to maintain such a building for the sake of five employees. They will sell the building.

Reputable delegations come to us, but due to the fact that they don’t have many hotels to choose from, they generally leave to spend the night in Toulouse.

In terms of the cultural life of the city, is it rich in events?

Yes, we have many cultural events. On June 16, the city hosted a children’s festival organized by Francas du Pays de Foix, with children’s shows and games.  On June 21, as in the whole of France, we had a music festival.  On June 29 was a sports event “Porcina Fuxi” – a 7-kilometer run through the streets of the city. From June 29 to July 1, the street music festival “Foix’R Street” took place. From July 6 to July 14, the 22nd film festival was held, where films on the topic “French Resistance” were presented. On  July 7 we had a sausage festival.

From June 21 to October 15, we hold events every weekend!

We also have an animal fair.

Foix is ​​a lively city.

Now we are preparing for the big event that will take place on December 15th – “Tout Foix, tout flamme”. It is a celebration of light and illumination. It is a colorful parade in the center of the city. 20000 spectators will fill the streets.

What would you like to do for the city as mayor that you have not done yet?

My goal is to respect what others have done, all that we have inherited. Only by being based on this we can move ahead.

We did some work in the city: we organized cultural and sports entertainment, assimilated the refugees and repaired the university. We are raising generations that can take responsibility and become our successors from 2020 to 2026. We need to give them the city budget so that they can properly handle it.

This is the only thing that worries me.

My name doesn’t matter much to me. Life goes on, and while we are in power, we must do what we can. Of course, we can’t do everything. We do little things. But they add up and turn into big things.

Our work is part of a global and common project. It is this idea I try to instill in those who work with me – and this, as a rule, is the younger generation of 35-40-year-olds.

Nevertheless, what, in your opinion, does Foix lack in order to be known as a tourist destination?

We do not have enough advertising. And there is not enough consistency among us when making the united strategy. We also need one visual image with Ariège.

The castle in Foix is ​​our main heritage, and it is necessary to associate Foix with it.

In the NFT world, artists work together to promote each other’s art, said Aimee del Valle, a British artist living in France.