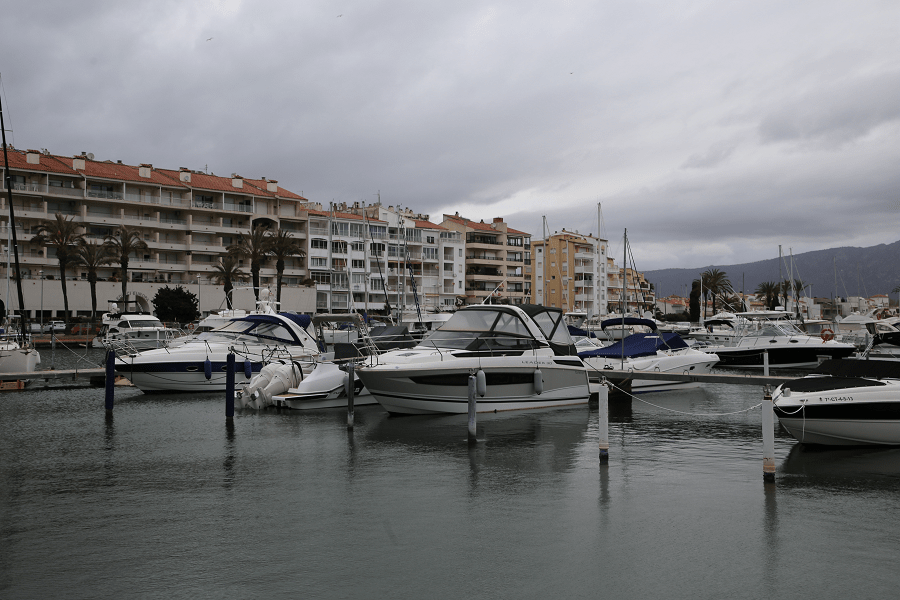 Empuriabrava (cat. Empuriabrava) is an urbanization (district) of the municipality of Castelló d’Empúries, in the Alt Emporda region, province of Girona (Catalonia, Spain), with approximately 7000 registered inhabitants.

The urbanization is a residential marina town built close to Graells Beach and around an extensive network of artificial canals inspirated by the coast of France (Port Grimaud) and Florida (USA).

Empuriabrava has a long beach and is the largest residential port in the world with about 24 km of navigable canals and 5,000 private marinas. In summer, the population increases due to the large influx of tourists, reaching a real population of about 75,000 inhabitants.

Empuriabrava’s main tourists are usually of German, French and, to a lesser extent, English and Dutch origin.

The commercial and service area is located at the entrance to the urbanization, next to the C-260 highway, where the airfield is also located. There is another commercial area opposite the sea, known as Els Arcs. The sailing port is located in the center of the urbanization, on the main canal, and has a characteristic watchtower and nautical club.

Since 1988, a used boat fair has been held here annually during Holy Week.

The project for the construction of a large urbanization on the northern Costa Brava was promoted in 1964 by Eurobrava S.A. (later Ampuriabrava SA), created by Antoni de Moxó i Güell, Marquis of Sant Mori. The project was presented to the city council of Castelló in 1965, where it met hard resistance from many small agricultural owners. After overcoming resistance, a partial plan was approved in 1967, when canals and streets were already built without any permission, and the construction of houses began, all according to the residential marina formula, then original in Europe. In 1975, the second phase of the project began, culminating in the economic crisis and popular resistance.

The site chosen, despite important agricultural and livestock activities, was part of the Aiguamolls de l’Empordà, a coastal marshland of great ecological importance. Strong intervention motivated the resistance of the nascent environmental movement, which, after the transition to democracy in Spain, managed to restrict the originally planned area (up to 600 hectares) and made some elements of the 1967 plan, such as the construction of the navigable canal to Figueres, forgotten.

In 1980, when the project was in crisis (especially with regard to the airfield and nautical club), ownership of the residential marina passed from the hands of the original promoters to the city council of Castelló d’Empúries. The city improved the basic services stock and infrastructure, which led to significant economic growth in the municipality.

The C-260 road connects it with Figueres (18 km), where the N-II roads and the AP-7 motorway pass, as well as the town of Roses.

From Barcelona or Girona: Take the AP-7 motorway or the N-II motorway. Exit 4 if you are taking the AP7 motorway. Via N-II direction France; then take the Figueres-Roses exit and C-260 to Roses.

A regular bus line connects the urbanization with the axis municipalities of the region.

The weekly market in Castelló: every Tuesday in Plaça Mossèn Cinto Verdaguer (opposite the Basilica of Santa Maria).