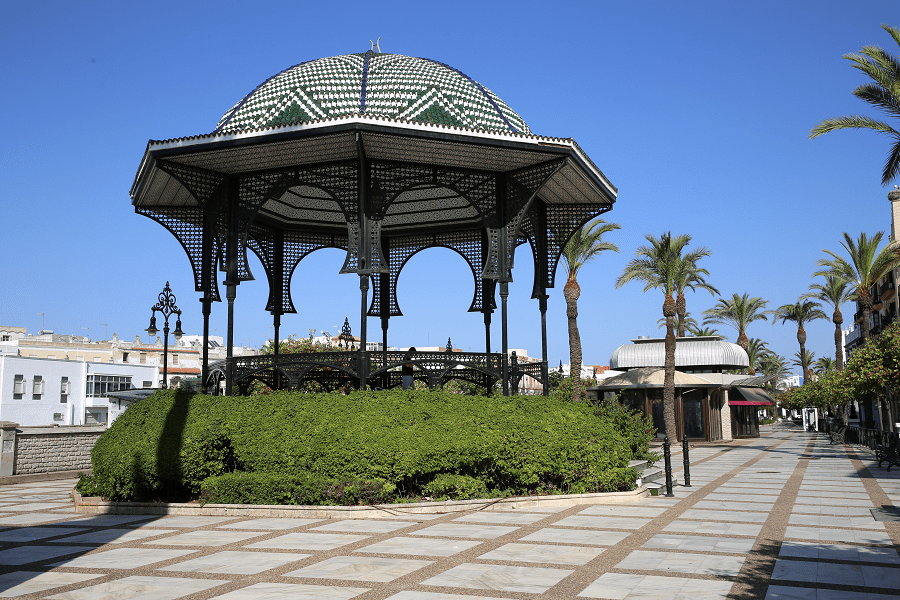 Chiclana de la Frontera is a city and municipality in the province of Cádiz (Spain), in the autonomous community of Andalusia. In 2020 it had 85,556 inhabitants, forming part of the metropolitan area of the Bay of Cádiz–Jerez, the third largest metropolitan area in Andalusia, behind Seville and Malaga, and the 11th in Spain. The municipality contains the largest number of hotel beds in the Province of Cádiz and the Costa de la Luz. 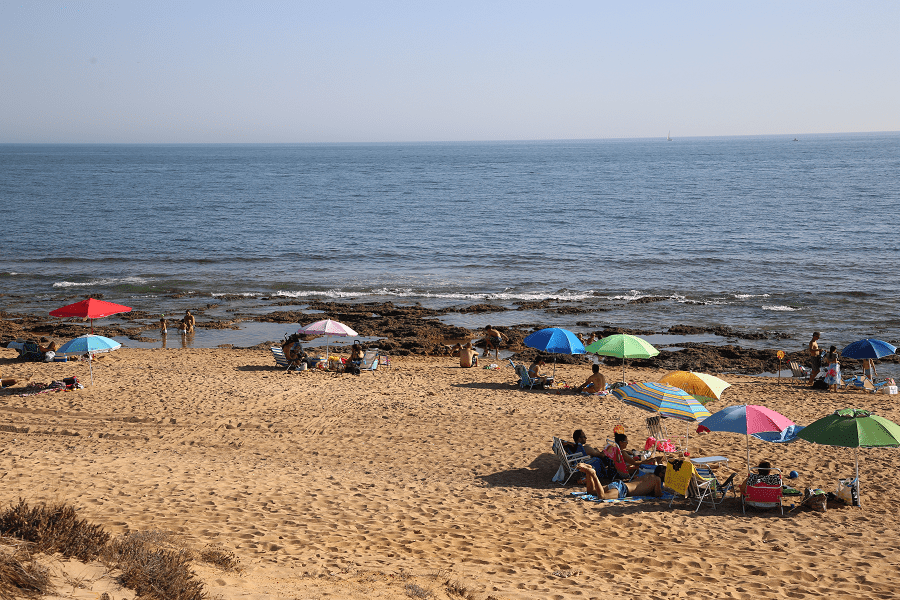 Church of San Juan Bautista (Iglesia Mayor): Masterpiece of the 19th century of Cadiz neoclassicism. Designed by Torcuato Cayón and completed by his godson Torcuato Benjumeda. It is built on a previous church, of which it preserves in one of its chapels a Flemish altarpiece from the 16th century. 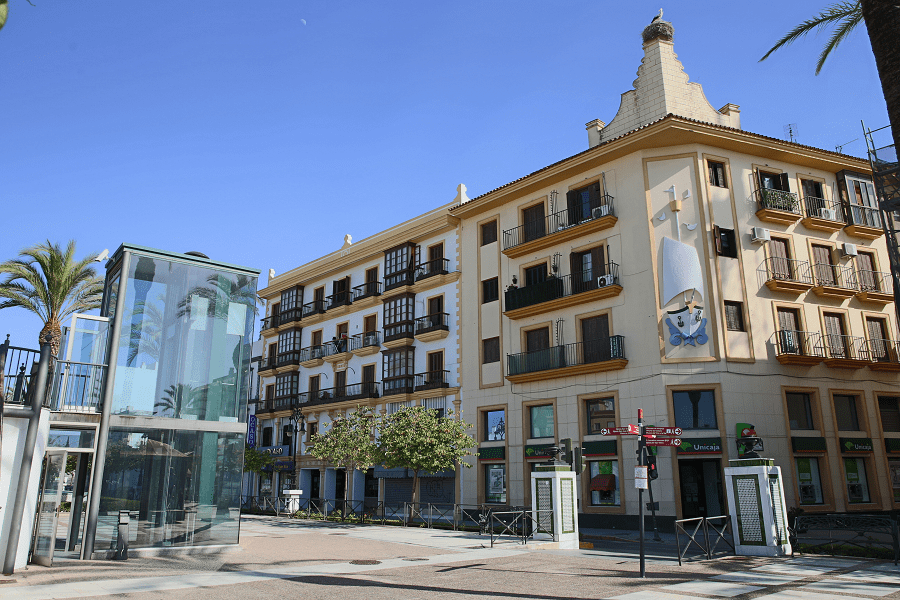 Ermita de Santa Ana: a visual icon of the city, considered one of the 7 Magic Points of Chiclana, it is located at the highest point of the city and is visible for several kilometers around. It was built by Torcuato Cayón in the 18th century.

Convent of Jesús Nazareno: this 17th century baroque building was founded by Mother Antonia de Jesús in 1666, it has a beautiful baroque white marble doorway with outstanding Solomonic columns, made in Italy around 1690. Inside is the processional carving of Jesus Nazareno, 16th century. 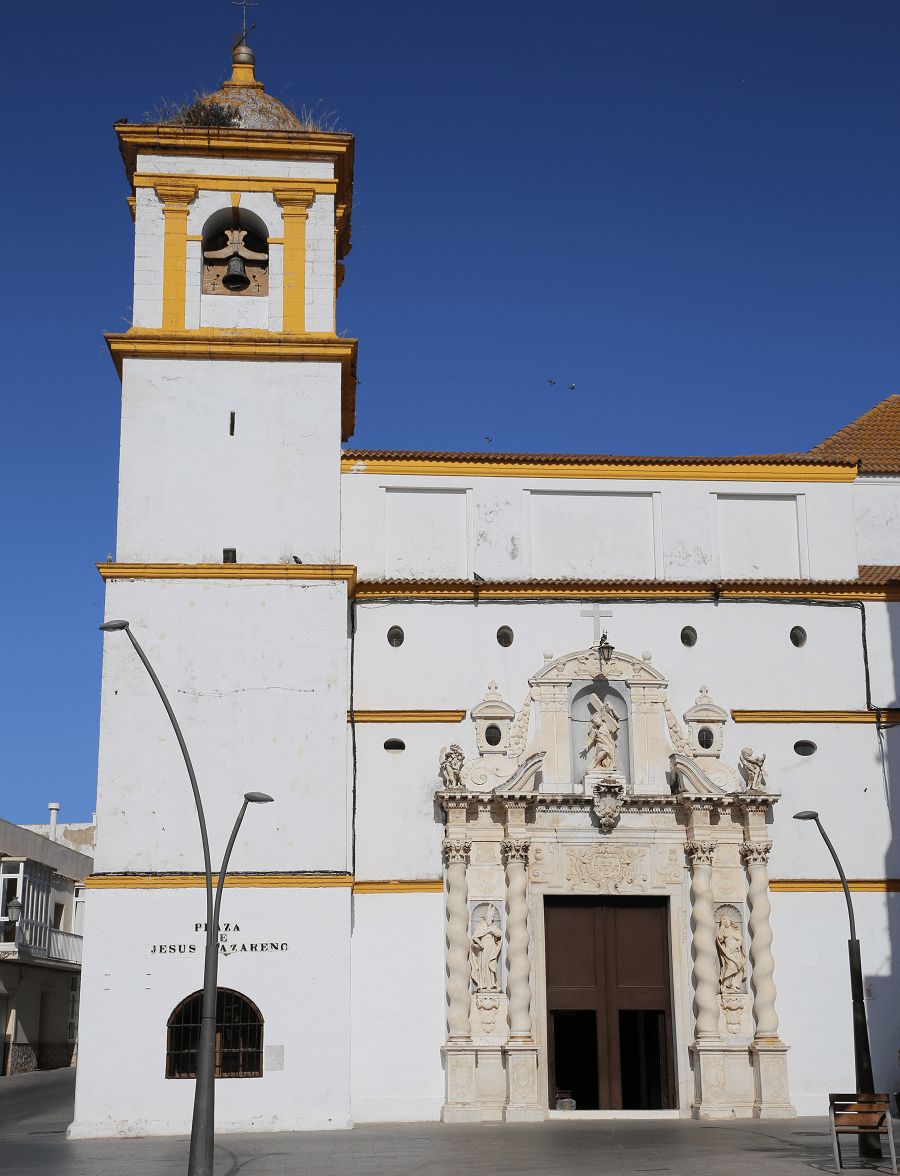 Church of the Holy Trinity (San Telmo): it was built in the 17th century. In its interior, its main altar stands out, in baroque style in gilded wood, dated in 1740, presided over by the icon of Nuestra Señora de los Remedios (Patron Saint of Chiclana). On the outside, the angular steeple of a very singular conception stands out.

Church of San Sebastián: from the 16th century: it is located next to the Puente de los Remedios. This church has undergone several reforms throughout its history. In the atrium, the monument dedicated to Antonio Cabrera, a prestigious speaker, scientist and botanist stands out. 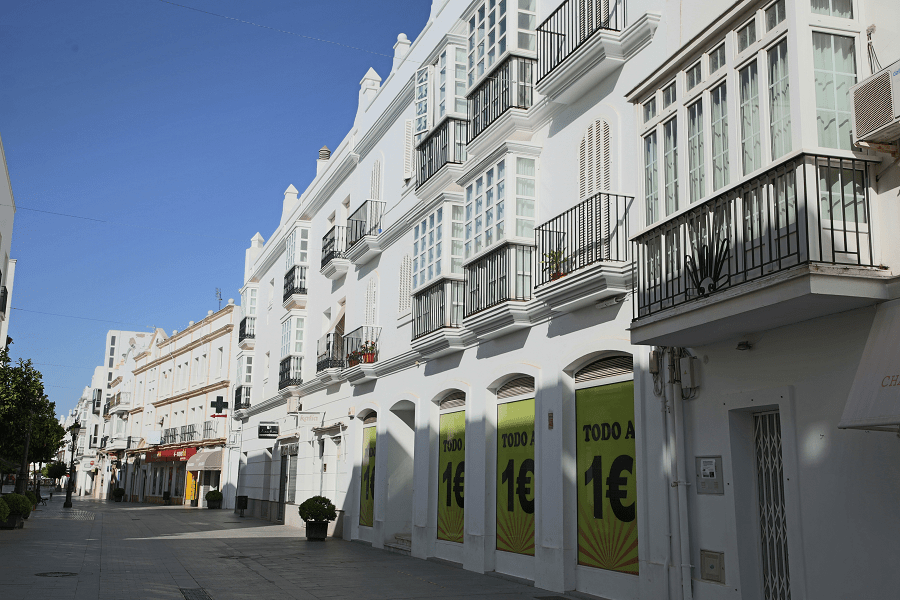 Chapel of the Vera-Cruz Chapel of Santo Cristo: it is the oldest religious building in the city, dating from the end of the 15th century, inside it houses the brotherhood of the Vera Cruz, whose owner is the Santo Cristo de la Vera Cruz.

San Martín Hospital: it dates from the 16th century. Although it has undergone several reforms, this old building still preserves the Chapel of the Sacred Heart, with several baroque altarpieces. Currently, this building is part of the Colegio “Niño Jesús”. 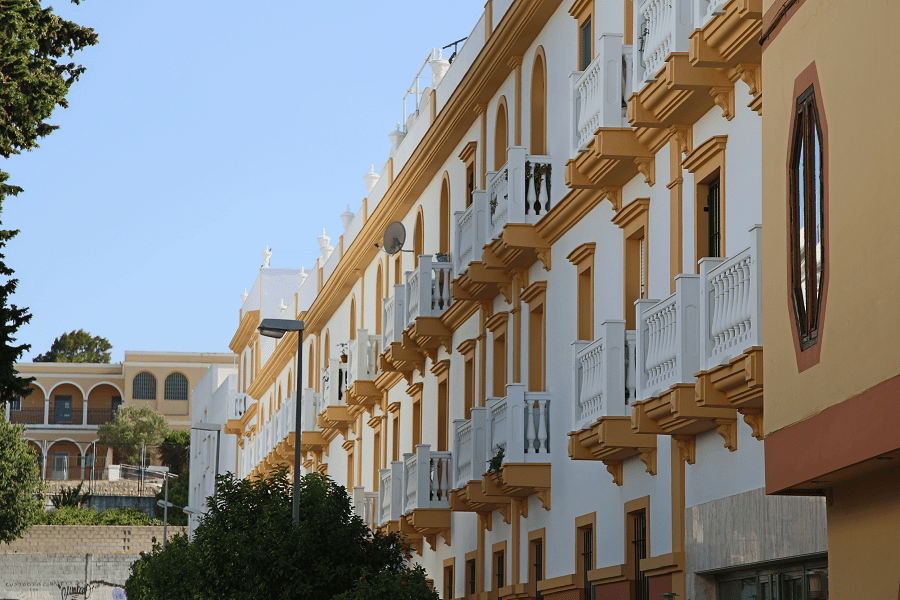 Clock tower: popularly known as Arquillo del Reloj, it is one of the most emblematic buildings in Chiclana. It was built in the 18th century on one of the old doors of the Villa, which originally formed part of the old Town Hall. Because the nearby Church of San Juan Bautista lacked a bell tower, as the construction of two bell towers was unfinished, this religious use was attributed to the Tower. 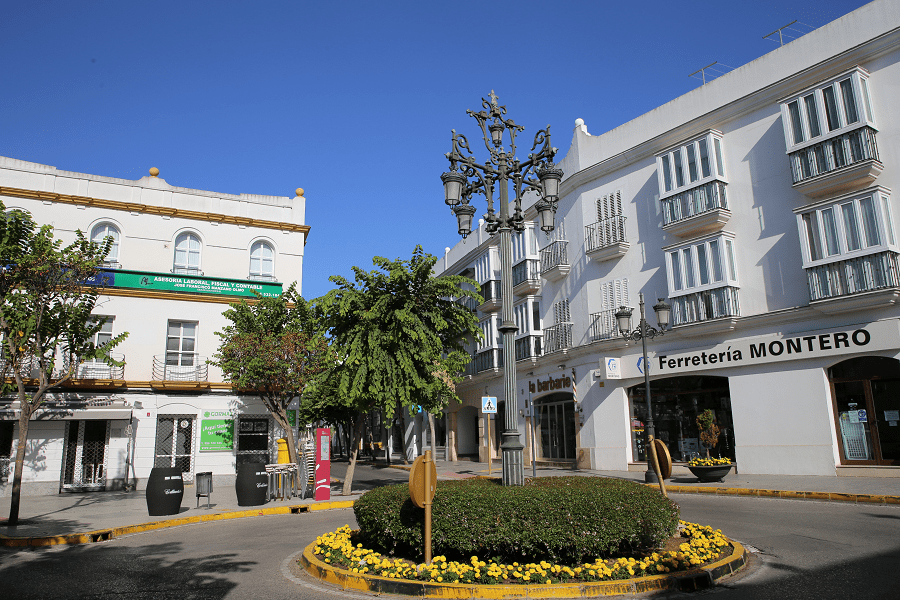 Town Hall: the Chiclana de la Frontera Town Hall was one of the first buildings built with reinforced concrete in Spain, although it is built on the Palace-House of Don Alejandro Risso, which dates from the 18th century. In 2011 the new building was inaugurated by the president of the Junta de Andalucía, José Antonio Griñan. The new building, built on top of the previous one, has 4000 square meters built, divided into four floors. A spacious, modern building adapted to the needs of the local administration, ready to respond to the Chiclana of the XXI century.

House-palace of the Count of Torres: located in the Plaza del Retortillo of this city, named in honor of José de Retortillo, Count of Torres according to a noble title granted in 1738 by the then reigning monarch Felipe V. Palace of two stories high and trapezoidal plan that rises during the last third of the 18th century. 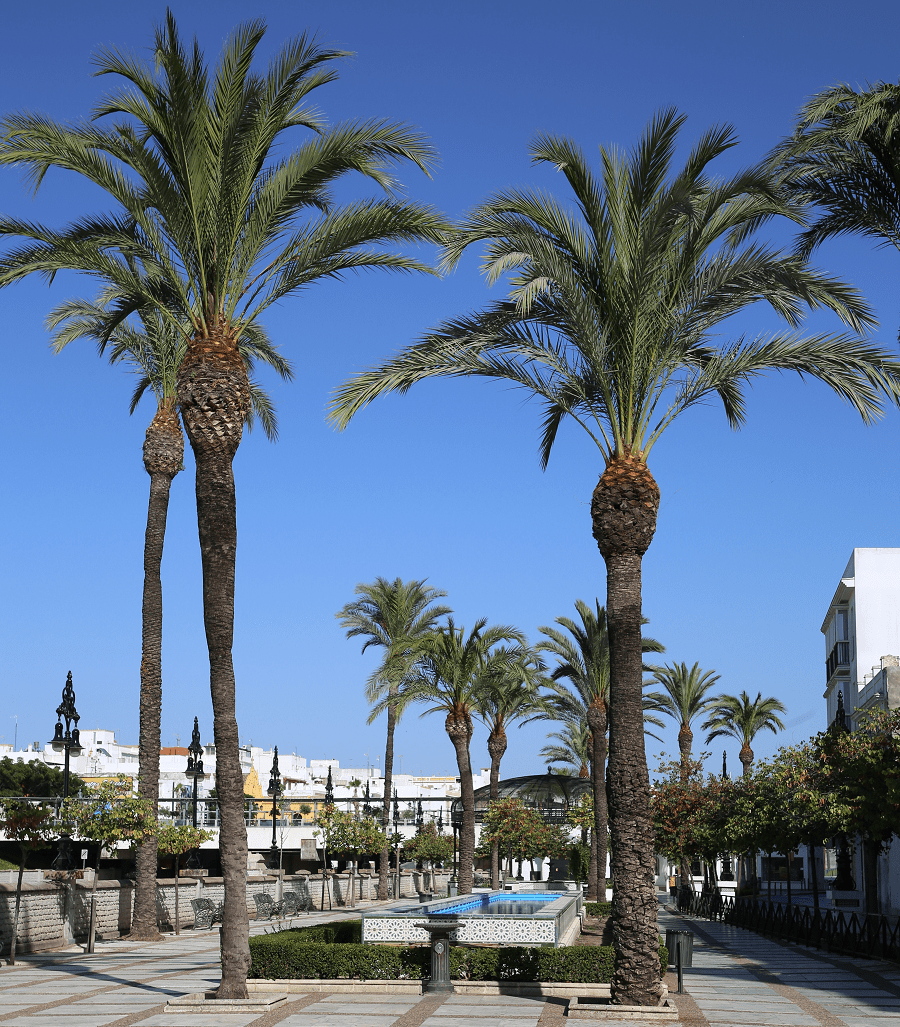 House-palace of the Count of Pinar: stands on the central Fierro Street, named in homage to Marcos del Hierro, 1st Count of Pinar, an important character of French origin who arrives in the city of Cádiz attracted like so many others by its economic expansion as a result of its commercial activity with America.

House-palace of the Count of the Five Towers: located in the center of the city, on García Gutiérrez street, within what in the middle of the 19th century Barrio de San Alejandro was dominated. 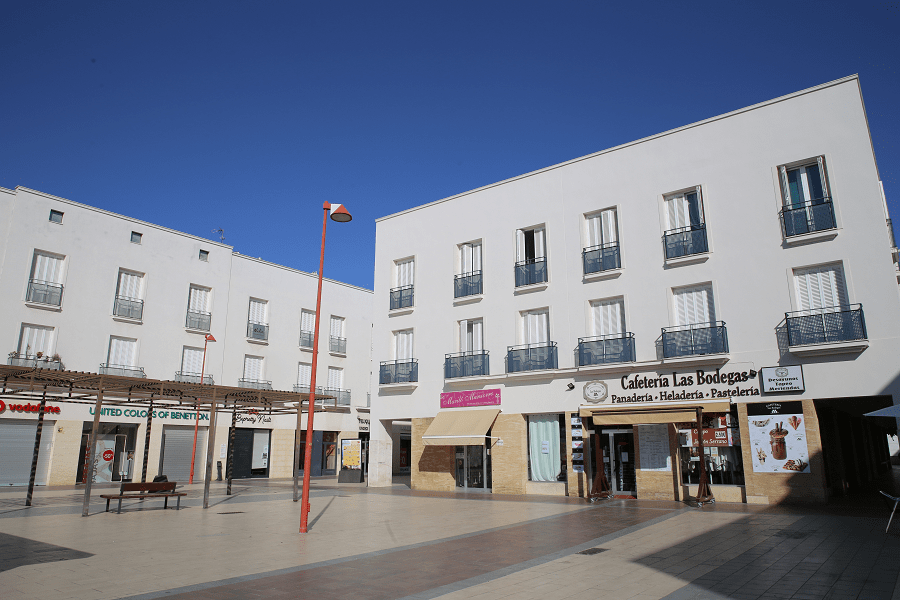 Casa Briones: located in the Plaza Mayor and within the architectural complex of the city, the Casa de los Briones or “Casa Briones” is one of the most beautiful examples of 18th century buildings. This building is attributed to the neoclassical architect Torcuato Cayón. 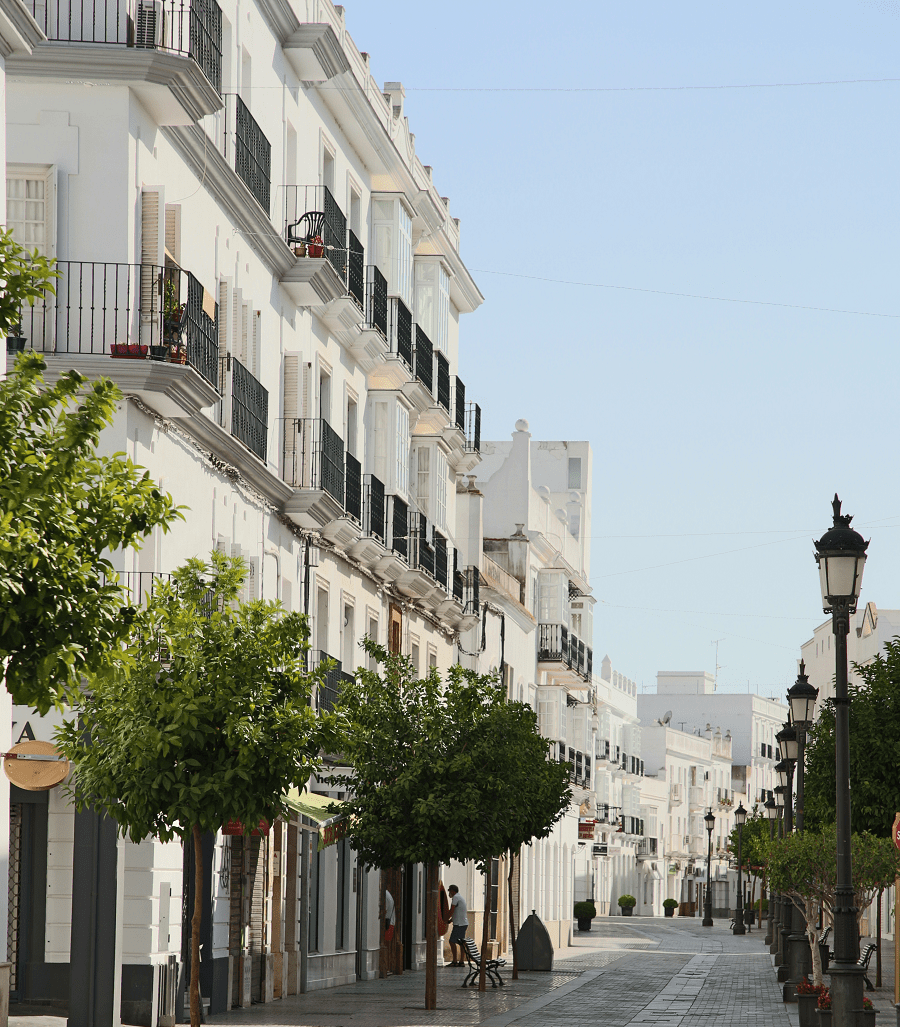 Chiclana Museum: Casa de los Briones, located in the Plaza Mayor. In the different rooms, the public will be able to observe diverse contents such as the prehistory and antiquity of the city, its formation, the battle of Chiclana and the contemporary era. 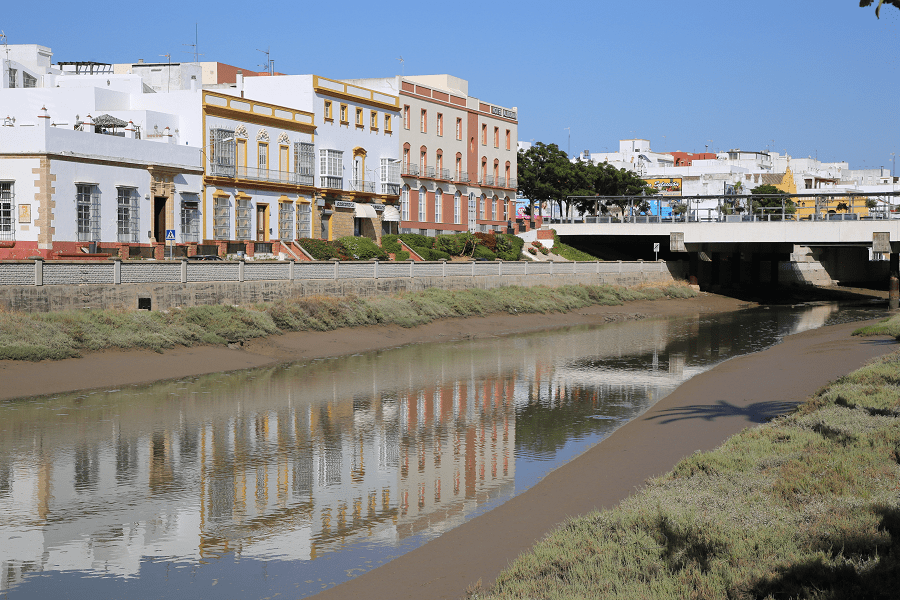 Marín Dolls Factory-Museum: where the history of the Marín factory and its traditional creation of dolls was collected, founded in 1928 and, since then, it has been a key point of reference for any economic activity related to the sale of gifts and souvenirs, both in Spain and abroad. Since its inception, the factory has handcrafted the typical dolls of craftsmanship, designing everything from the hairstyle to the decoration of the faces. Finally, in 2014 it closed its doors. 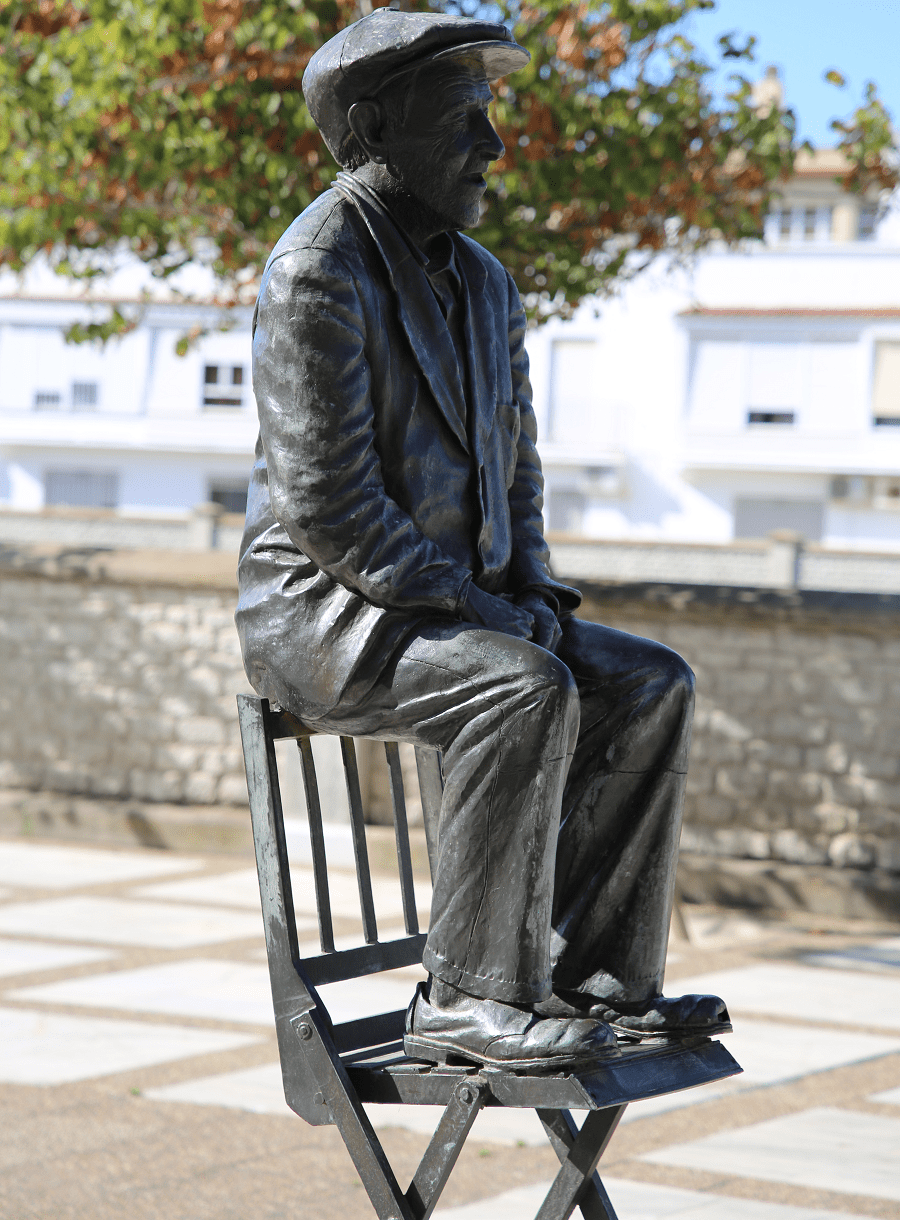 Francisco Montes Paquiro Municipal Museum: It is dedicated to the figure of the bullfighter Francisco de Paula Montes y Reina “Paquiro”, born in Chiclana on January 13, 1805. He is considered the most important bullfighter of the 19th century, not only for its magnificent conditions of fighter but for his great contribution from the world of bullfighting. 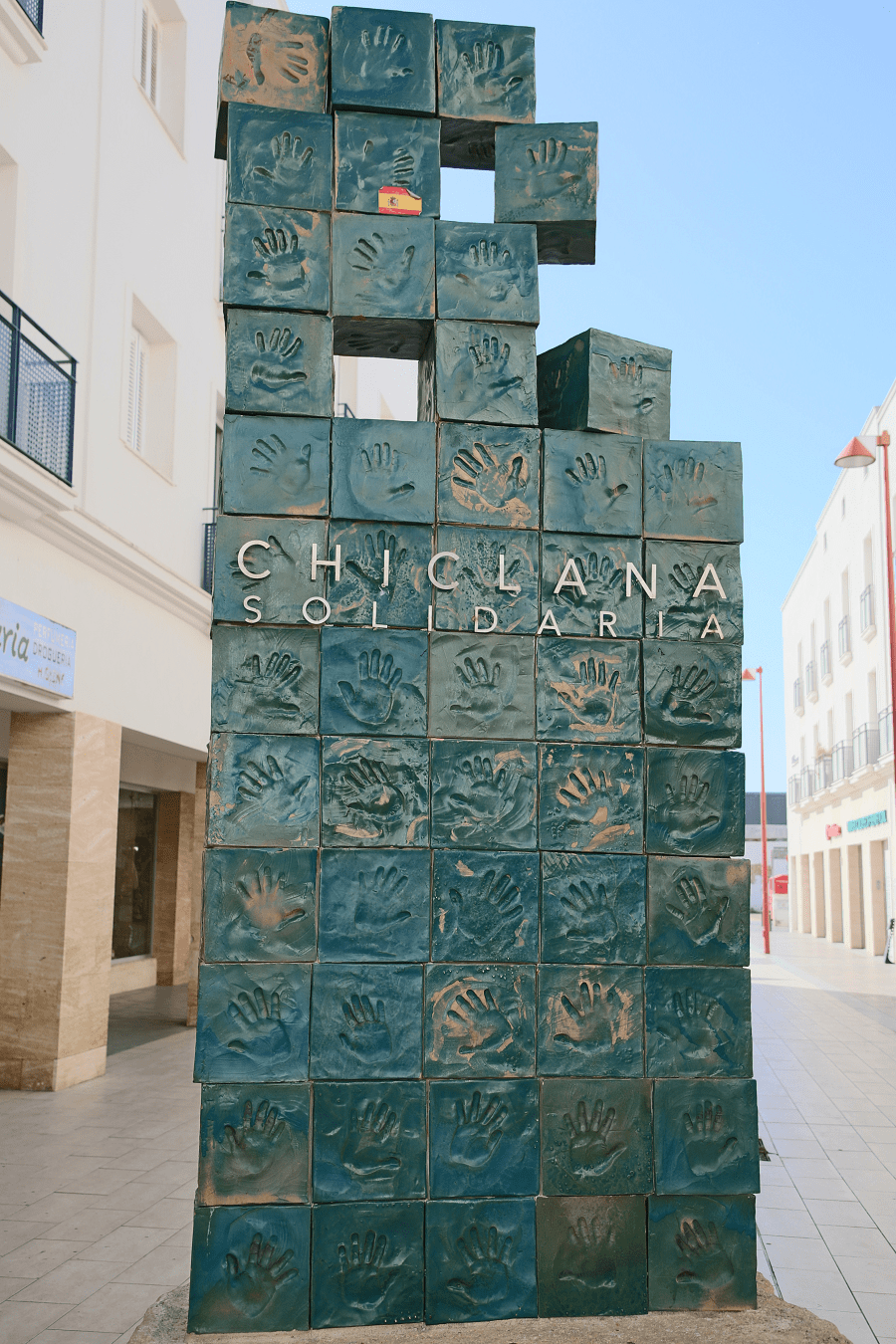 Wine and Salt Interpretation Center: the museum is arranged on a single floor, created from three winery naves, dedicated to wine and salt. In the shop you can buy wines, supplied by the local wineries. 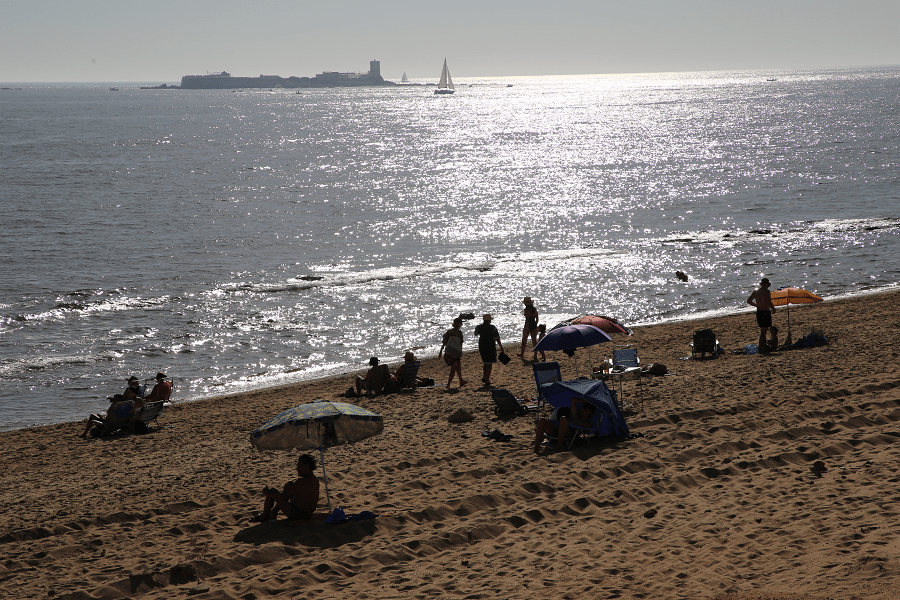 Barrosa beach: it is eight kilometers long, from the cliff that separates it from Sancti Petri beach, to Loma del Puerco. With a massive influx of tourists from different parts of Spain and other countries such as Germany, the United Kingdom, it has numerous 4 or 5 star hotels located in large urbanizations around the beach. This is also due to the climate of the area, which enjoys more than 300 days of sunshine a year, which makes it one of the most visited Spanish beaches. 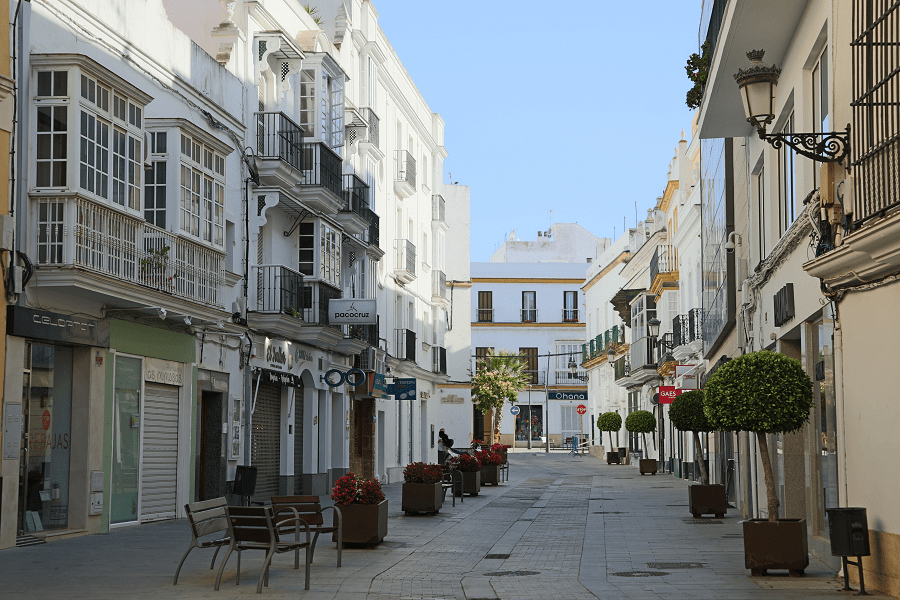 Sancti Petri Beach: this beach is famous for its naturalness as it is in a natural park. It is separated by another important beach in this municipality La Barrosa by a cliff. In front of this beach you can see the castle of Sancti Petri where it is said that the temple of Melkart or Hercules from Cádiz and the Boquerón point was located. It has the Blue Flag, Ecobeaches and the Q for Tourist Quality. In addition, the ISO 14001 certificate must be added as a quality rubric. 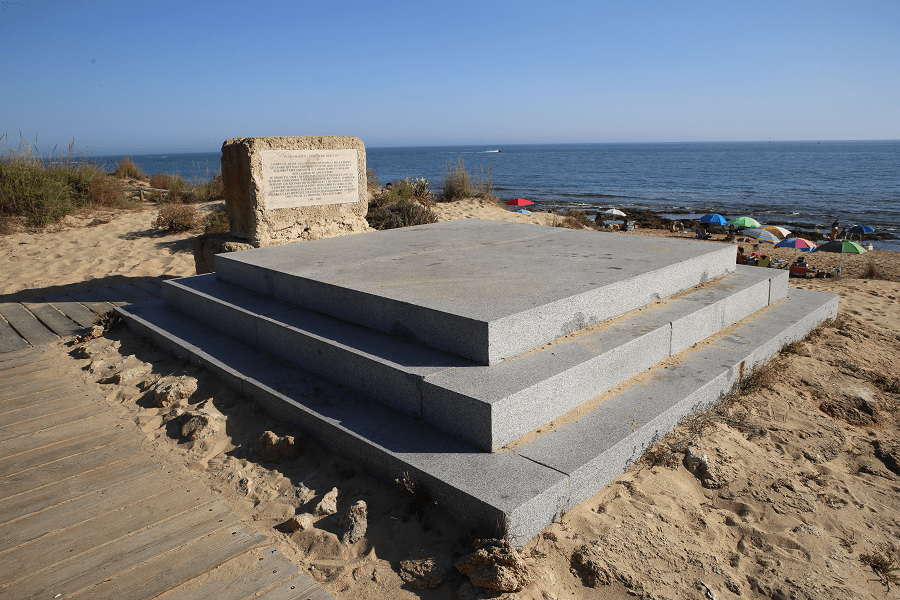 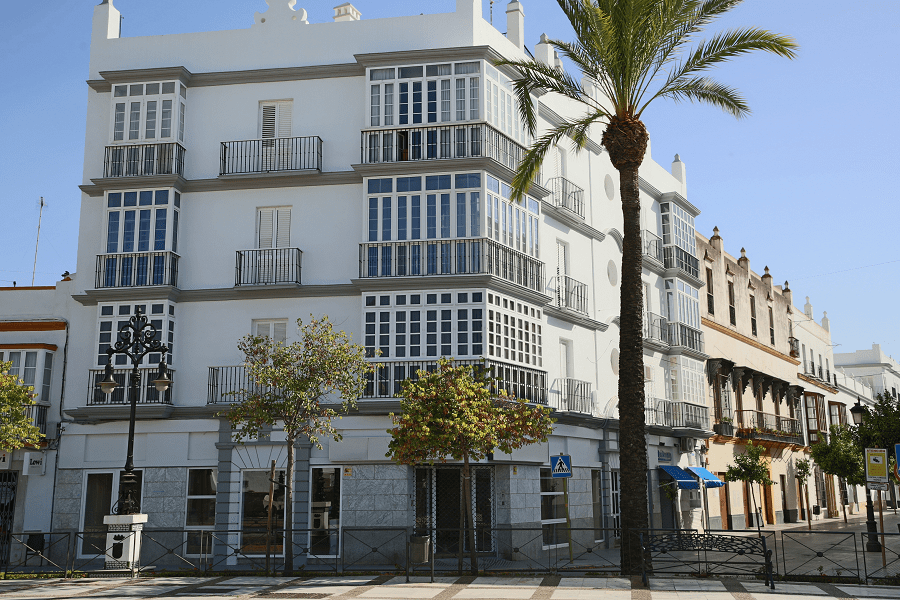 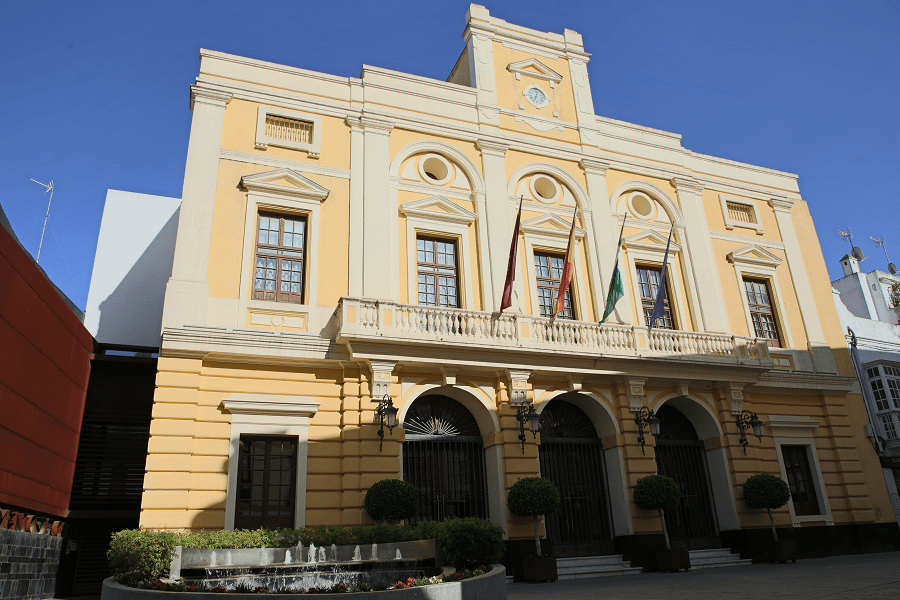