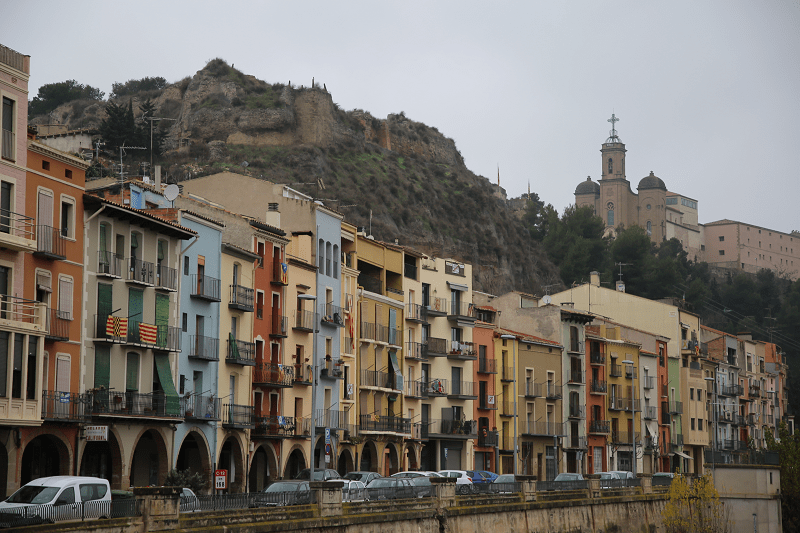 Balaguer is a city and municipality in Spain, the historic town in the Urgell county and the capital of La Noguera (cat. La Noguera). La Noguera – the largest comarca in Catalonia, is included in the province, the main city of which is Lleida (cat. Lleida), located 30 km from Balaguer. The population of Balaguer is 16,841 inhabitants and the city is located at an altitude of 250 m above sea level on the river Segre (cat. Riu Segre) and covers an area of 57.4 sq. km.

Its story originates from a Muslim settlement that arose in the Pla-d’Almata district but then began to grow in the direction of the fortress of the Court (today’s Formos castle) and the Avimoni mosque (cat. Avimoni) – the current Sant Salvador square (cat. Sant Salvador). See here more history of the city.

Since that time, the city was conquered by the Counts of Urgell in 1105 but the old city remained almost unchanged, not counting the appearance of new religious buildings (the Church of the Savior (cat. Sant Salvador)), new open spaces and the restoration of the city wall.

More noticeable changes occurred in the XIV century in connection with the expulsion of the Jews: the formation of the Market Square (cat. Plaça Mercadal) and the expansion of the wall perimeter. A whole series of civil and church buildings that appeared at this stage including the bridge of Sant Miquel (cat. Pont de Sant Miquel), the church of St. Mary (cat. Església de Santa Maria) and the monastery of St. Dominique (cat. Convent de Sant Domènec)) changed Balaguer’s image.

At present, restoration work is being carried out, which, within the framework of the Law on Regions

The appearance of the district wall dates back to the X and XI centuries – the last centuries of Muslim rule in the city. At that time, the perimeter of the walls was smaller, and its borders were outlined by the Mercadal Square in the south, the current Firal district (cat. Barri del Firal) in the west, the river in the east and the Formos fortress in the north.

In 1333, Alphonse the Meek III Earl of Barcelona and IV, the King of Aragon, ordered the Jews to leave the borders of Balaguer and settle in the place that today occupies the streets of Teixidors (cat. Carrer dels Teixidors) and St. Juzep (cat. Carrer de Sant Josep), where Comarca Archive is located, the Noguera Museum and information and tourist center and Miracle street (cat. Carrer del Miracle), where the church of the same name (formerly a synagogue) is dedicated to the heavenly patroness of the city – the Holy Virgin Miracle. This is how the Jewish quarter south of Mercadal Square appeared. Naturally, the new settlement had to be surrounded by walls to protect it from any external enemies.

Over the following centuries, little mention was made of the city walls, but it is known that they played an important role in the defense of Balaguer during various military conflicts which the city participated in. See here more about the ruins of the Formos Castle.

To see the walled part of the city, you can walk from the Mercadal Square through the Ice Gate to Muralia Street (cat. Carrer de la Muralla) or Creu Street (cat. Carrer de la Creu), which will lead you either to St. Mary’s Church or to the Drum Tower (cat. tiorre del Bombo), which, during the civil war, served as an observation post. From here, you can see the wall paintings near the fortress and inside the Firal district, next to the cemetery. At present, it is possible to climb the walls through the White Tower (cat. Torre Blanca), or Drum, located on Bombo Boulevard (cat. Passeig del Bombo), through the Ice Gate on the street Creu or opposite the church of St. Mary from the square of Cecilia de Comenge (cat. Plaça Cecília de Comenge).

Due to its majestic size and dominant position of the city, this church is a symbol and a distinctive feature of Balaguer. This single-nave Gothic temple of hewn stone began to be built in 1351. Its pure geometric outlines, simple and compact, powerful buttresses and the octahedral bell tower are especially attractive. The church was declared as a monument to history and art. Currently, there is a permanent exhibition “Art in St. Mary” (cat. Art a Santa Maria), the main theme of which is the “plastic” transfer of the image of the Mother of God.

Every Saturday and Sunday, church bells (with a total weight of 5550 kg) ring “angelus” (a midday call to prayer).

In the main lobby of the church’s museum there is an office where you can get information about both this monument and other attractions of Balaguer.

The old mosque of Alham (cat. Aljama) and the following Romanesque church of St. Maria Almata (Cat. Santa Maria d’Almatà) is one of Balaguer’s visual symbols. It consists of the church itself, the monastery of nuns-clariss, the abbot’s house and the sanctuary building, forming a single architectural ensemble, visible from afar. Special mention should be made of the crucifixion of the Holy Christ of Balaguer (cat. Sant Crist de Balaguer) kept in the basilica, revered in all the regions of western Catalonia and the nearby regions of Aragon. Nowadays, the hotel has become part of the complex – for those who prefer peace and quiet.

Legend claims that this particular crucifix was the first one made by people. Its creator was Nicodemus (cat. Nicodem), who kept in mind the scene of the crucifixion of Christ and then decided to capture it. The crucifixion was burned during the last civil war. The current crucifix was created by sculptor Joachim Ros (cat. Joaquim Ros), reproducing the original image. It is made of Scandinavian pine and contains a “transplant” of the original crucifix – the foot of Christ, which was saved from the fire.

The sanctuary can be reached on foot via Torrent street (cat. Carrer Torrent) from the old city or by going through the “Way of the Cross” (cat. Viacrucis) or “road to Golgotha” (cat. Mont del calvari) – which has 14 stations carved out of stone along the route,. It passes not far from the bridge of Sant Miquel (cat. Pont de Sant Miquel) parallel to the road to Ager (cat. Àger) and leads us to the Pla d’Almat.

This square is located in the lower part of the old town and is the most extensive Catalan square surrounded by porticoes. Its formation began in the 14th century when Jews were ordered to settle outside the city, outside the areas of the Castle and St. Savior, which appeared after the Christian conquest of 1105.

The expulsion of the Jewish community outside medieval Balaguer in 1333 marked important changes in the future appearance of the city: Balaguer expanded southward (the Jewish quarter) and acquired an additional section of the fortress wall, which, connecting with the old one in the Icy Gate area, encircled the enlarged city. Thus, the square appeared on a vast wasteland that separated the Jewish quarters from the Christian ones and soon turned into a market.

Over the centuries, the square has been transformed. The construction of the New Bridge (cat. Pont Nou) in 1940, when the city seized the opposite bank of the river, was marked by the destruction of one of the houses around the square – House Alos (cat. Ca l’Alòs) to pave the street – Gaspar de Portola lane (cat. Passatge Gaspar de Portolà), which connected the square with the bridge and the new Davant-Balaguer district (cat. Davant Balaguer).

In recent years, the area has undergone several modifications and after redevelopments in 1994, it acquired its present appearance. It is worth mentioning the disappearance of the sidewalks, which ensured a uniform level of the square and allowed it to be completely surrounded by porticoes (the building next to the Major street (cat. Carrer Major) did not provide such an opportunity for years).

The Mercadal of Balaguer is the largest square with porticos in Catalonia. Its area is 7000 sq.m (including gallery areas – 9875 sq.m.), and the shape is almost a regular rectangle. The first trees were planted on the square in 1910.

This wide square with a slight bias towards the river suddenly opens onto the maze of narrow streets of the old city. Due to this contrast, the area seems even larger. The most characteristic feature of the Mercadal are the porticos surrounding the area around the perimeter. The lack of town planning standards regarding the size of buildings provided a variety of facades and arches, which gives the area an original look.

In the Mercadal Square you can find the building of the City Hall, built in the middle of the XIX century. It had to go through a lot of rebuilding, especially with the facade. The current appearance of the City Hall – the fruit of the last repair, was made in the 60s.

The Saturday market, one of the largest markets in Western Catalonia, gathers a lot of shops and a large number of buyers from Balaguer and the whole region together in the square.

The size of the area (113 m is the northern side, 103 m is the southern, 85 m is the eastern and 103 m is the western) as well as its protection from winds and river moisture, its location on a mountain slope with a fortified wall and the Gothic church of St. Mary, a variety of porticos and an active role in the life of the city, afford Mercadal a place among the most beautiful squares of Catalonia.

Shopping in Balaguer is not a priority on the tourist program. Only on weekends city bazaars and fairs, which traditionally take place on weekends or on some public holidays in the main square of Mercadal, can be of tourist interest. At the fairs, in particular, you can come across exclusive products grown in the region. Among them are some well-known wine and cheese brands in Spain.

In the city there are more than 30 restaurants of a fairly high quality. Prices are cheaper than in Barcelona and Lleida. Mostly located within the borders of the Old Town.